The Metaphor Map of English shows the metaphorical links which have been identified between different areas of meaning. These links can be from the Anglo-Saxon period right up to the present day so the map covers 1300 years of the English language. Find out more
The project provides a richly-illustrated Catalogue of all known architectural projects by Charles Rennie Mackintosh, including over 1200 drawings by Mackintosh and the practice, analytical and contextual essays, a timeline and glossary. Find out more
James McNeill Whistler (1834-1903) was a major figure in 19th century printmaking and created 490 etchings. Over 9500 impressions of these prints have been located and investigated during the project, which completes a series of catalogues raisonnés of Whistler's oeuvre. Find out more
As told by some of Scotland's best writers, and illustrated with thousands of images from the collections of the city's world-famous libraries, museums and universities. From football to fashions, Auchenshuggle to Yoker, you'll find it all here. Find out more
The online catalogue includes some 550 oil paintings and over 1700 works on paper dating from ca 1850 to 1903. The evolution of each painting from sketch to final oil is described and illustrated. Find out more
A publicly accessible, online scholarly edition of one of the most important archives of eighteenth-century medical "consultation letters", containing more than 20,000 digitised pages. Find out more
The project explores Romantic-period accounts of journeys into Wales and Scotland with a focus on the writings of the Flintshire naturalist and antiquarian Thomas Pennant (1726-1798), whose published Tours of both countries did so much to awaken public interest in the ‘peripheries’ of Britain. Find out more
Bess of Hardwick's Letters brings together, for the first time, the remarkable letters written to and from Bess of Hardwick (c.1521/2 or 1527-1608), one of Elizabethan England's most famous figures. Find out more
A database of all known people of Scotland between 1093 and 1314 mentioned in over 8600 contemporary documents. It is also being extended to 1371 to include all those lands, peoples and relationships mentioned in royal charters between 1314 and 1371. Find out more
The resource includes historical research for all Berwickshire place-names on the Ordnance Survey 1:50,000 Landranger map, including more than 1,600 place-names and 7,000 historical forms presented via a series of interactive maps. Find out more

I had two Zoom calls on Monday this week.  The first was with the Burns people to discuss the launch of the website for the ‘letters and poems’ part of ‘Editing Burns’, to complement the existing ‘Prose and song’ website (https://burnsc21.glasgow.ac.uk/).  The new website will launch in January with some video content and blogs, plus I will be working on a content management system for managing the network of Burns’ letter correspondents, which I will put together some time in November, assuming the team can send me on some sample data by then.  This system will eventually power the ‘Burns letter writing trail’ interactive maps that I’ll create for the new site sometime next year.

My second Zoom call was for the Books and Borrowing project to discuss adding data from a new source to the database.  The call gave us an opportunity to discuss the issues with the data that I’d highlighted last week.  It was good to catch up with the team again and to discuss the issues with the researcher who had originally prepared the spreadsheet containing the data.  We managed to address all of the issues and the researcher is going to spend a bit of time adapting the spreadsheet before sending it to me to be batch uploaded into our system.

For example, the entry https://anglo-norman.net/entry/bochet_1 there is a form ‘buchez’ in a citation and then two variant texts for this where the form is ‘huchez’ and ‘buistez’.  None of these forms are listed in the entry’s XML as variants so it’s not possible for a script to automatically deduce which is the correct date to use (the closest is ‘buchet’).  In this case the main citation form and its corresponding date should be used.  Whereas in the entry https://anglo-norman.net/entry/babeder the main citation form is ‘gabez’ while the variant text has ‘babedez’ and so this is the form and corresponding date that needs to be used.  It would be difficult for a script to automatically deduce this.  In this case a Levenstein test (which test how many letters need to be changed to turn one string into another) could work, but this would still need to be manually checked.

The editor wanted me to focus on those entries where the date issue affects the earliest date for an entry, as these are the most important as the issue results in an incorrect date being displayed for the entry in the header and the browse feature.  I wrote a script that finds all entries that feature ‘<varlist’ somewhere in the XML (the previously exported 4309 entries).  It then goes through all attestations (in all sense, subsense and locution sense and subsense sections) to pick out the one with the earliest date, exactly as the code for publishing an entry does.  What it then does is checks the quotation XML for the attestation with the earliest date for the presence of ‘<varlist’ and if it finds this it outputs information for the entry, consisting of the slug, the earliest date as recorded in the database, the earliest date of the attestation as found by the script, the ID of the  attestation and then the XML of the quotation.  The script has identified 1549 entries that have a varlist in the earliest citation, all of which will need to be edited.

However, every citation has a date associated with it and this is used in the advanced search where users have the option to limit their search to years based on the citation date.  Only updating citations that affect the entry’s earliest date won’t fix this, as there will still be many citations with varlists that haven’t been updated and will still therefore use the wrong date in the search.  Plus any future reordering of citations would require all citations with varlists to be updated to get entries in the correct order.  Fixing the earliest citations with varlists in entries based on the output of my script will fix the earliest date as used in the header of the entry and the ‘browse’ feature only, but I guess that’s a start.

Also this week I sorted out some access issues for the RNSN site, submitted the request for a new top-level ‘ac.uk’ domain for the STAR project and spent some time discussing the possibilities for managing access to videos of the conference sessions for the Iona place-names project.  I also updated the page about the Scots Dictionary for Schools app on the DSL website (https://dsl.ac.uk/our-publications/scots-dictionary-for-schools-app/) after it won the award for ‘Scots project of the year’.

I also spent a bit of time this week learning about the statistical package R (https://www.r-project.org/).  I downloaded and installed the package and the R Studio GUI and spent some time going through a number of tutorials and examples in the hope that this might help with the ‘Speak for Yersel’ project.

For a few years now I’ve been meaning to investigate using a spider / radar chart for the Historical Thesaurus, but I never found the time.  I unexpectedly found myself with some free time this week due to ‘Speak for Yersel’ not needing anything from me yet so I thought I’d do some investigation.  I found a nice looking d3.js template for spider / radar charts here: http://bl.ocks.org/nbremer/21746a9668ffdf6d8242  and set about reworking it with some HT data.

My idea was to use the chart to visualise the distribution of words in one or more HT categories across different parts of speech in order to quickly ascertain the relative distribution and frequency of words.  I wanted to get an overall picture of the makeup of the categories initially, but to then break this down into different time periods to understand how categories changed over time.

As an initial test I chose the categories 02.04.13 Love and 02.04.14 Hatred, and in this initial version I looked only at the specific contents of the categories – no subcategories and no child categories.  I manually extracted counts of the words across the various parts of speech and then manually split them up into words that were active in four broad time periods: OE (up to 1149), ME (1150-1449), EModE (1450-1799) and ModE (1800 onwards) and then plotted them on the spider / radar chart, as you can see in this screenshot: 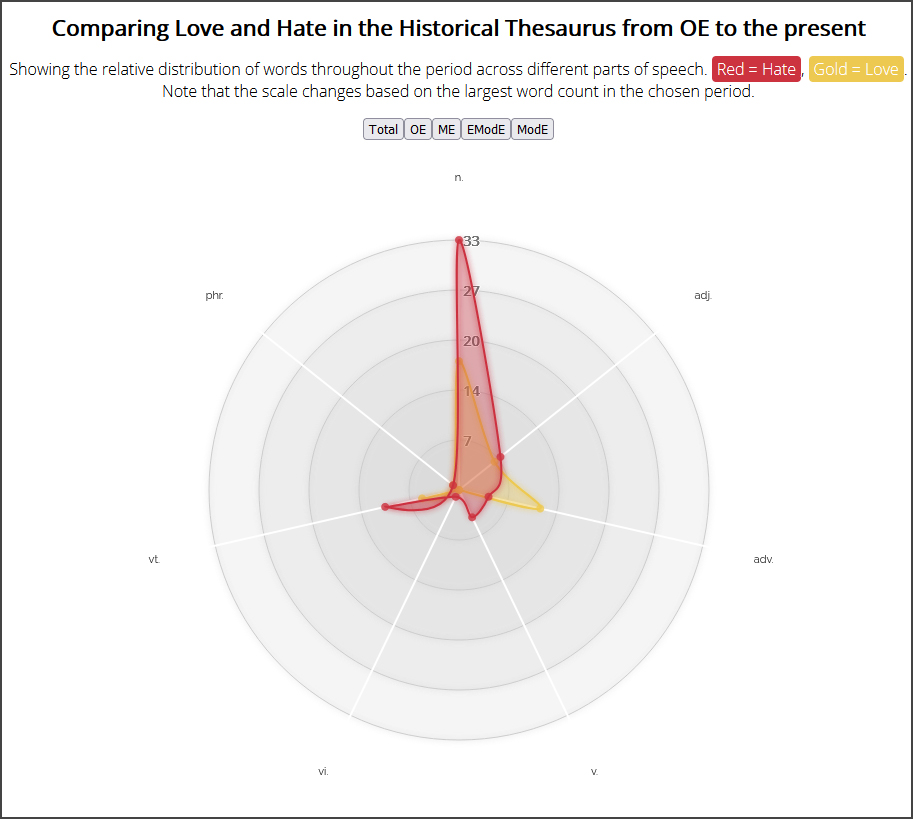 You can quickly move through the different time periods plus the overall picture using the buttons above the visualisation, and I think the visualisation does a pretty good job of giving you a quick and easy to understand impression of how the two categories compare and evolve over time, allowing you to see, for example, how the number of nouns and adverbs for love and hate are pretty similar in OE: 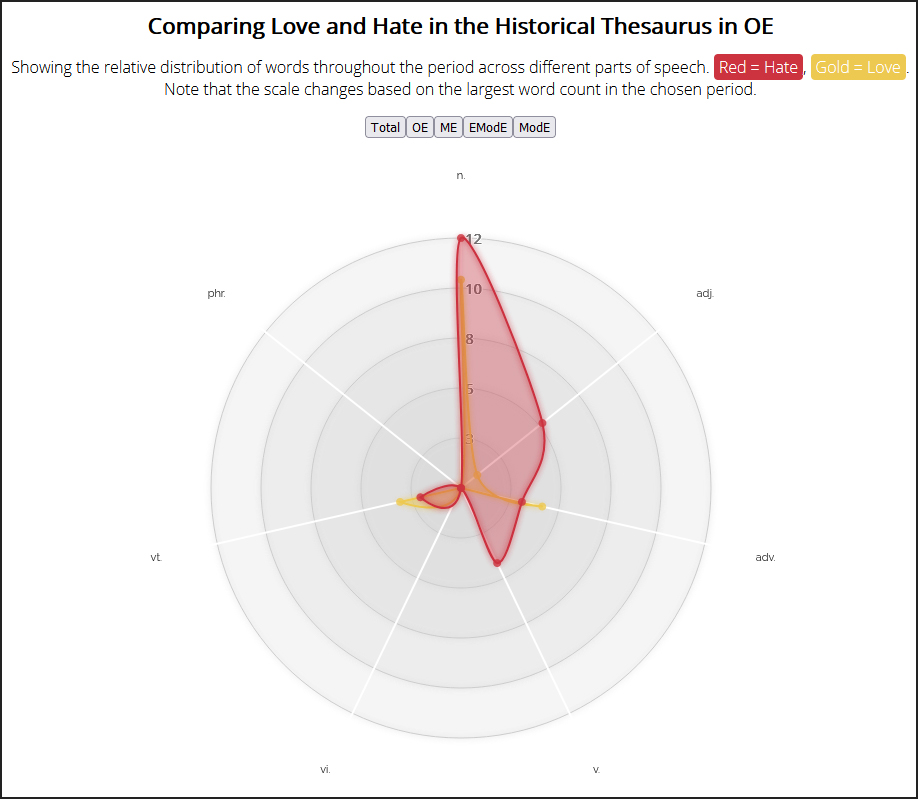 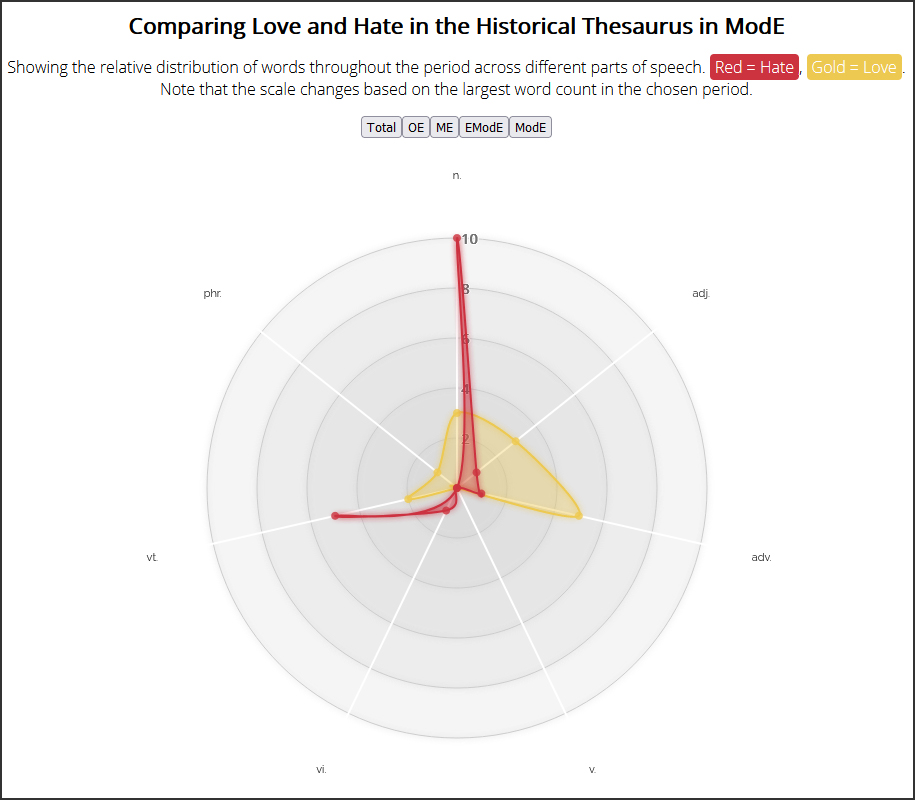 We are of course dealing with small numbers of words here, but even so it’s much easier to use the visualisation to compare different categories and parts of speech than it is to use the HT’s browse interface.  Plus if such a visualisation was set up to incorporate all words in child categories and / or subcategories it could give a very useful overview of the makeup of different sections of the HT and how they develop over time.

There are some potential pitfalls to this visualisation approach, however.  The scale used currently changes based on the largest word count in the chosen period, meaning unless you’re paying attention you might get the wrong impression of the number of words.  I could change it so that the scale is always fixed as the largest, but that would then make it harder to make out details in periods that have much fewer words.  Also, I suspect most categories are going to have many more nouns than other parts of speech, and a large spike of nouns can make it harder to see what’s going on with the other axes.  Another thing to note is that the order of the axes is fairly arbitrary but can have a major impact on how someone may interpret the visualisation.  If you look at the OE chart the ‘Hate’ area looks massive compared to the ‘Love’ area, but this is purely because there is only one ‘Love’ adjective compared to 5 for ‘Hate’.  If the adverb axis had come after the noun one instead the shapes of ‘Love’ and ‘Hate’ would have been more similar.  You don’t necessarily appreciate on first glance that ‘Love’ and ‘Hate’ have very similar numbers of nouns in OE, which is concerning.  However, I think the visualisations have a potential for the HT and I’ve emailed the other HT people to see what they think.