The resource includes historical research for all Berwickshire place-names on the Ordnance Survey 1:50,000 Landranger map, including more than 1,600 place-names and 7,000 historical forms presented via a series of interactive maps. Find out more
A database of all known people of Scotland between 1093 and 1314 mentioned in over 8600 contemporary documents. It is also being extended to 1371 to include all those lands, peoples and relationships mentioned in royal charters between 1314 and 1371. Find out more
A publicly accessible, online scholarly edition of one of the most important archives of eighteenth-century medical "consultation letters", containing more than 20,000 digitised pages. Find out more
As told by some of Scotland's best writers, and illustrated with thousands of images from the collections of the city's world-famous libraries, museums and universities. From football to fashions, Auchenshuggle to Yoker, you'll find it all here. Find out more
The Metaphor Map of English shows the metaphorical links which have been identified between different areas of meaning. These links can be from the Anglo-Saxon period right up to the present day so the map covers 1300 years of the English language. Find out more
The project explores Romantic-period accounts of journeys into Wales and Scotland with a focus on the writings of the Flintshire naturalist and antiquarian Thomas Pennant (1726-1798), whose published Tours of both countries did so much to awaken public interest in the ‘peripheries’ of Britain. Find out more
The resource provides ultrasound tongue imaging (UTI) and lip video of speech, magnetic resonance imaging (MRI) video of speech, and 2D midsagittal head animations based on MRI and UTI data. Find out more
The Scots Syntax Atlas presents the results of over 100,000+ acceptability judgments from over 500 speakers on over 250 morphosyntactic phenomena. The Atlas also contains a text-to-sound aligned corpus of spoken data totalling 275 hours and over 3 million words. Find out more
The Digital Catalogue documents, visually and textually, the first ten years of Andy Goldsworthy's ephemeral, outdoor practice. It replicates Goldsworthy's Slide Cabinet Index, and includes previously unpublished material from Goldsworthy's Sketchbook Diaries. Find out more
James McNeill Whistler (1834-1903) was a major figure in 19th century printmaking and created 490 etchings. Over 9500 impressions of these prints have been located and investigated during the project, which completes a series of catalogues raisonnés of Whistler's oeuvre. Find out more
project

The resource includes historical research for all Berwickshire place-names on the Ordnance Survey 1:50,000 Landranger map, including more than 1,600 place-names and 7,000 historical forms presented via a series of interactive maps. 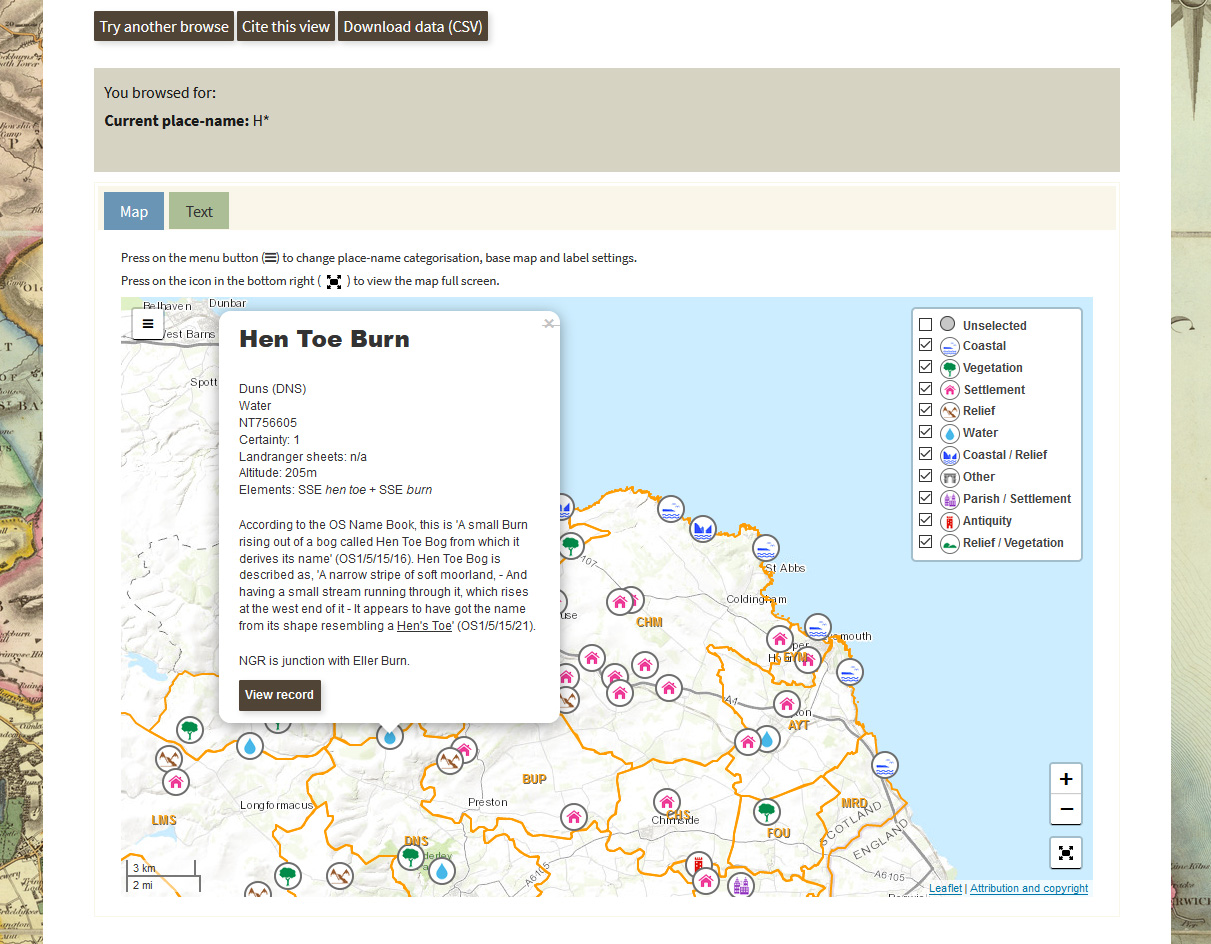 A map of all place-names starting with 'H', with 'Hen Toe Burn' selected.

The research project Recovering the Earliest English Language in Scotland: Evidence from place-names was funded for three years by The Leverhulme Trust at the University of Glasgow (2016-2019). Place-names are the main source of evidence for Anglo-Saxon settlement in northern Britain, and for the Northumbrian dialect of Old English which developed into Older Scots and northern Middle English. The data are largely untapped, particularly north of the present Scottish/English border. This project makes the first sustained attempt to investigate Anglo-Saxon place-names in Scotland. Building on the momentum of the recently inaugurated Survey of Scottish Place-Names, it focuses on the south-eastern county of Berwickshire, the heartland of Anglo-Saxon settlement in Scotland, in order to examine the linguistic features of Old Northumbrian.

Old English, the collective term for the dialects spoken by the Anglo-Saxon settlers in Britain from the fifth to eleventh centuries, is the ancestor of both Present-Day English and Scots. Of the three main types of sources – manuscripts, inscriptions and place-names – only place-names are available for the study of the Old Northumbrian dialect spoken north of the present Scottish/English border. They have not yet been investigated, since the evidence they preserve can only be accessed through systematic place-name survey, which has been ongoing in England since the 1920s but has only recently begun in Scotland. The historical county of Berwickshire has some of Scotland’s earliest recorded place-names. They derive from a range of Celtic and Germanic languages including Brittonic, Gaelic, Old English and Old Norse; most later names are from Scots. The data are of immense value, both as evidence for the Old Northumbrian dialect, and as evidence for the ways in which it interacted with earlier and later linguistic strata, developing the features that differentiate Older Scots from northern Middle English. The project thus addresses one of the most important gaps in current knowledge of English historical linguistics – the earliest form of English spoken in Scotland.

The main aims of the project can be summarised as follows:

In addition to the web resource launched in November 2018, the main outputs of the project in the longer term will include: