The Metaphor Map of English shows the metaphorical links which have been identified between different areas of meaning. These links can be from the Anglo-Saxon period right up to the present day so the map covers 1300 years of the English language. Find out more
The resource provides ultrasound tongue imaging (UTI) and lip video of speech, magnetic resonance imaging (MRI) video of speech, and 2D midsagittal head animations based on MRI and UTI data. Find out more
The project explores Romantic-period accounts of journeys into Wales and Scotland with a focus on the writings of the Flintshire naturalist and antiquarian Thomas Pennant (1726-1798), whose published Tours of both countries did so much to awaken public interest in the ‘peripheries’ of Britain. Find out more
The resource includes historical research for all Berwickshire place-names on the Ordnance Survey 1:50,000 Landranger map, including more than 1,600 place-names and 7,000 historical forms presented via a series of interactive maps. Find out more
As told by some of Scotland's best writers, and illustrated with thousands of images from the collections of the city's world-famous libraries, museums and universities. From football to fashions, Auchenshuggle to Yoker, you'll find it all here. Find out more
James McNeill Whistler (1834-1903) was a major figure in 19th century printmaking and created 490 etchings. Over 9500 impressions of these prints have been located and investigated during the project, which completes a series of catalogues raisonnés of Whistler's oeuvre. Find out more
Bess of Hardwick's Letters brings together, for the first time, the remarkable letters written to and from Bess of Hardwick (c.1521/2 or 1527-1608), one of Elizabethan England's most famous figures. Find out more
The Scots Syntax Atlas presents the results of over 100,000+ acceptability judgments from over 500 speakers on over 250 morphosyntactic phenomena. The Atlas also contains a text-to-sound aligned corpus of spoken data totalling 275 hours and over 3 million words. Find out more
The Digital Catalogue documents, visually and textually, the first ten years of Andy Goldsworthy's ephemeral, outdoor practice. It replicates Goldsworthy's Slide Cabinet Index, and includes previously unpublished material from Goldsworthy's Sketchbook Diaries. Find out more
The Scottish Corpora project has created large electronic corpora of written and spoken texts for the languages of Scotland, featuring nearly 4.6 million words of text, with audio recordings to accompany many of the spoken texts. Find out more

I had an in-person meeting for the Historical Thesaurus on Tuesday this week – the first such meeting I’ve had since the first lockdown began.  It was a much more enjoyable experience than Zoom-based calls and we had some good discussions about the current state of the HT and where we will head next.  I’m going to continue to work on my radar chart visualisations when I have the time and we will hopefully manage to launch a version of the quiz before Christmas.  There has also been some further work on matching categories and we’ll be looking into this in the coming months.

We also discussed the Digital Humanities conference, which will be taking place in Tokyo next summer.  This is always a really useful conference for me to attend and I wondered about writing a paper about the redevelopment of the Anglo-Norman Dictionary.  I’m not sure at this point whether we would be able to afford to send me to the conference, and the deadline for paper submission is the end of this month.  I did start looking through these blog posts and I extracted all of the sections that relate to the redevelopment of the site.  It’s almost 35,000 words over 74 pages, which shows you how much effort has gone into the redevelopment process.

I also had a meeting with Gerry Carruthers and others about the setting up of an archive for the International Journal of Scottish Theatre and Screen.  I’d set up a WordPress site for this and explored how the volumes, issues and articles could be migrated over from PDFs.  We met with the two students who will now do the work.  I spent the morning before the meeting preparing an instruction document for the students to follow and at the meeting I talked through the processes contained in the document.  Hopefully it will be straightforward for the students to migrate the PDFs, although I suspect it may take them an article or two before they get into the swing of things.

Also this week I fixed an issue with the search results tabs in the left-hand panel of the entry page on the DSL website.  There’s a tooltip on the ‘Up to 1700’ link, but on narrow screens the tooltip was ending up positioned over the link, and when you pressed on it the code was getting confused as to whether you’d pressed on the link or the tooltip.  I repositioned the tooltips so they now appear above the links, meaning they should no longer get in the way on narrow screens.  I also looked into an issue with the DSL’s Paypal account, which wasn’t working.  This turned out to be an issue on the Paypal side rather than with the links through from the DSL’s site.

I also had to rerun the varlist date scripts for the AND as we’d noticed that some quotations had a structure that my script was not set up to deal with.  The expected structure is something like this:

I wasn’t aware that this was a possibility, so my script wasn’t set up to catch such situations.  It therefore only looks at the first <varlist>. And the <ms_var> that needs to be used for dating isn’t contained in this, so gets missed.  I therefore updated the script and have run both spreadsheets through it again.  I also updated the DMS so that quotations with multiple varlists can be processed.

Also this week I updated all of the WordPress sites I manage and helped set up the Our Heritage, Our Stories site, and had a further discussion with Sofia about the conference pages for the Iona place-names project.

I spent the rest of the week continuing to work on the mockups for the Speak For Yerself project, creating a further mockup of the grammar quiz that now features all of the required stages.  The ‘word choice’ type of question now has a slightly different layout, with buttons closer together in a block, and after answering the second question there is now an ‘Explore the answers’ button under the map.  Pressing on this loads the summary maps for each question, which are not live maps yet, and underneath the maps is a button for starting the quiz.  There isn’t enough space to have a three-column layout for the quiz so I’ve placed the quiz above the summary maps.  The progress bar also gets reinstated for the quiz and I’ve added the  text ‘Use the maps below to help you’ just to make it clearer what those buttons are for.  The ‘Q1’, ‘Q2’ IDs will probably need to be altered as it just makes it look like the map refers to a particular question in the quiz, which isn’t the case.  It’s possible to keep a map open between quiz questions, and when you press an answer button the ones you didn’t press get greyed out.  If your choice is correct you get a tick, and if not you get a cross and the correct answer gets a tick.  The script keeps track of what questions have been answered correctly in the background and I haven’t implemented a timer yet.  After answering all of the questions (there doesn’t need to be 6 – the code will work with any number) you can finish the section, which displays your score and the ranking.  Here is a screenshot of how the quiz currently looks: 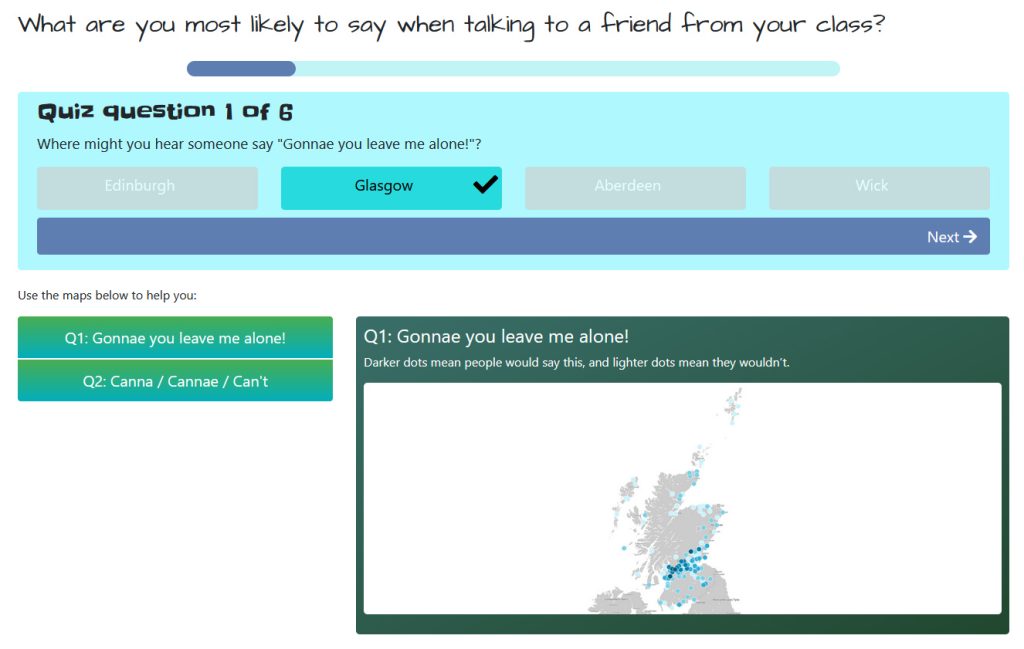