James McNeill Whistler (1834-1903) was a major figure in 19th century printmaking and created 490 etchings. Over 9500 impressions of these prints have been located and investigated during the project, which completes a series of catalogues raisonnés of Whistler's oeuvre. Find out more
The resource provides ultrasound tongue imaging (UTI) and lip video of speech, magnetic resonance imaging (MRI) video of speech, and 2D midsagittal head animations based on MRI and UTI data. Find out more
Bess of Hardwick's Letters brings together, for the first time, the remarkable letters written to and from Bess of Hardwick (c.1521/2 or 1527-1608), one of Elizabethan England's most famous figures. Find out more
As told by some of Scotland's best writers, and illustrated with thousands of images from the collections of the city's world-famous libraries, museums and universities. From football to fashions, Auchenshuggle to Yoker, you'll find it all here. Find out more
A database of all known people of Scotland between 1093 and 1314 mentioned in over 8600 contemporary documents. It is also being extended to 1371 to include all those lands, peoples and relationships mentioned in royal charters between 1314 and 1371. Find out more
The University of Glasgow’s Historical Thesaurus of English is a unique resource charting the development of meaning in the huge and varied vocabulary of English. It consists of almost every recorded word in English from Anglo-Saxon times to the present day, all arranged into detailed hierarchies of meaning. Find out more
The resource includes historical research for all Berwickshire place-names on the Ordnance Survey 1:50,000 Landranger map, including more than 1,600 place-names and 7,000 historical forms presented via a series of interactive maps. Find out more
The Metaphor Map of English shows the metaphorical links which have been identified between different areas of meaning. These links can be from the Anglo-Saxon period right up to the present day so the map covers 1300 years of the English language. Find out more
The online catalogue includes some 550 oil paintings and over 1700 works on paper dating from ca 1850 to 1903. The evolution of each painting from sketch to final oil is described and illustrated. Find out more
The Scottish Corpora project has created large electronic corpora of written and spoken texts for the languages of Scotland, featuring nearly 4.6 million words of text, with audio recordings to accompany many of the spoken texts. Find out more

I spent a bit of time this week writing an abstract for the DH2022 conference.  I wrote about how I rescued the data for the Anglo-Norman Dictionary in order to create the new AND website.  The DH abstracts are actually 750-1000 words long so it took a bit of time to write.  I have sent it on to Marc for feedback and I’ll need to run it by the AND editors before submission as well (if it’s worth submitting).  I still don’t know whether there would be sufficient funds for me to attend the event, plus the acceptance rate for papers is very low, so I’ll just need to see how this develops.

Also this week I participated in a Zoom call for the DSL about user feedback and redeveloping the DSL website.  It was a pretty lengthy call, but it was interesting to be a part of.  Marc mentioned a service called Hotjar (https://www.hotjar.com/) that allows you to track how people use your website (e.g. tracking their mouse movements) and this seemed like an interesting way of learning about how an interface works (or doesn’t).  I also had a conversation with Rhona about the updates to the DSL DNS that need to be made to improve the security or their email systems.  Somewhat ironically, recent emails from their IT people had ended up in my spam folder and I hadn’t realised they were asking me for further changes to be made, which unfortunately has caused a delay.

I spoke to Gerry Carruthers about another new project he’s hoping to set up, and we’ll no doubt be having a meeting about this in the coming weeks.  I also gave some advice to the students who are migrating the IJOSTS articles to WordPress too and made some updates to the Iona Placenames website in preparation for their conference.

For the Anglo-Norman Dictionary I fixed an issue with one of the textbase texts that had duplicate notes in one of its pages and then I worked on a new feature for the DMS that enables the editors to search the phrases contained in locutions in entries.  Editors can either match locution phrases beginning with a term (e.g. ta*), ending with a term (e.g. *de) or without a wildcard the term can appear anywhere in the phrase.  Other options found on the public site (e.g. single character wildcards and exact matches) are not included in this search.

The first time a search is performed the system needs to query all entries to retrieve only those that feature a locution.  These results are then stored in the session for use the next time a search is performed.  This means subsequent searches in a session should be quicker, and also means if the entries are updated between sessions to add or remove locutions the updates will be taken into consideration.

Search results work in a similar way to the old DMS option:  Any matching locution phrases are listed, together with their translations if present (if there are multiple senses / subsenses for a locution then all translations are listed, separated by a ‘|’ character).  Any cross references appear with an arrow and then the slug of the cross referenced entry.  There is also a link to the entry the locution is part of, which opens in a new tab on the live site.  A count of the total number of entries with locutions, the number of entries your search matched a phrase in and the total number of locutions is displayed above the results.

I spent the rest of the week working on the Speak For Yersel project.  We had a Zoom call on Monday to discuss the mockups I’d been working on last week and to discuss the user interface that Jennifer and Mary would like me to develop for the site (previous interfaces were just created for test purposes).  I spent the rest of my available time developing a further version of the grammar exercise with the new interface, that included logos, new fonts and colour schemes, sections appearing in different orders and an overall progress bar for the full exercise rather than individual ones for the questionnaire and the quiz sections.

I added in UoG and AHRC logos underneath the exercise area and added both an ‘About’ and ‘Activities’ menu items with ‘Activities’ as the active item.  The active state of the menu wasn’t mentioned in the document but I gave it a bottom border and made the text green not blue (but the difference is not hugely noticeable).  This is also used when hovering over a menu item.  I made the ‘Let’s go’ button blue not green to make it consistent with the navigation button in subsequent stages.  When a new stage loads the page now scrolls to the top as on mobile phones the content was changing but the visible section remained as it was previously, meaning the user had to manually scroll up.  I also retained the ‘I would never say that!’ header in the top-left corner of all stages rather than having ‘activities’ so it’s clearer what activity the user is currently working on.  For the map in the quiz questions I’ve added the ‘Remember’ text above the map rather than above the answer buttons as this seemed more logical and on the quiz the map pane scrolls up and scrolls down when the next question loads so as to make it clearer that it’s changed.  Also, the quiz score and feedback text now scroll down one after the other and in the final ‘explore’ page the clicked on menu item now remains highlighted to make it clearer which map is being displayed.  Here’s a screenshot of how the new interface looks: 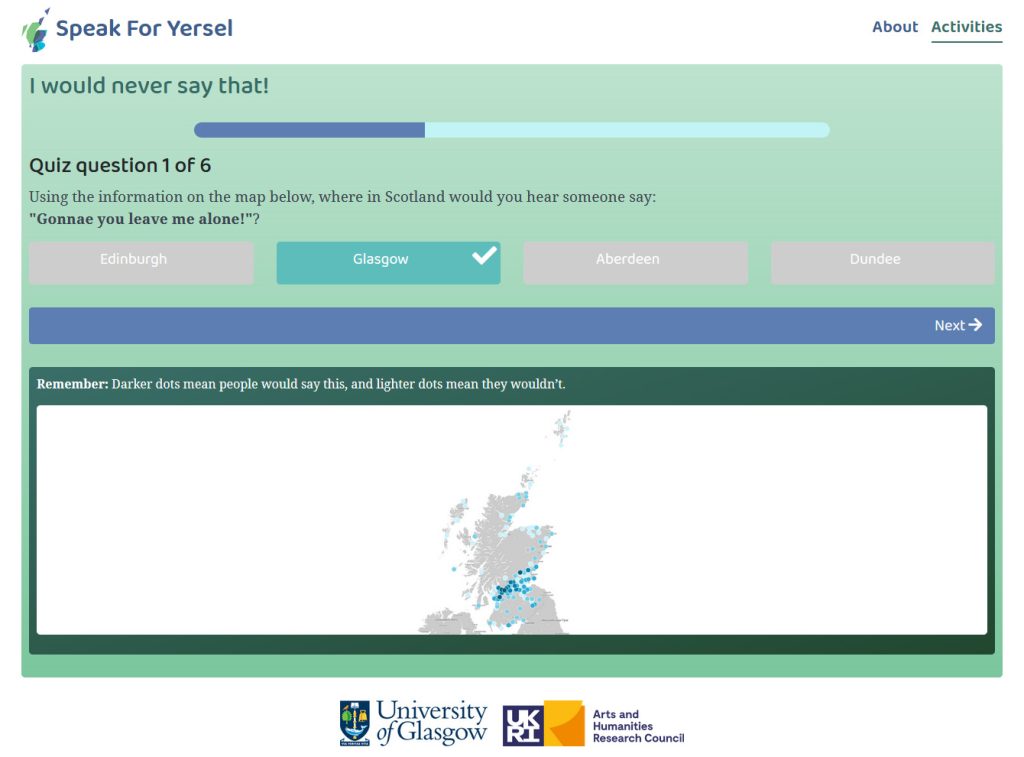