The project explores Romantic-period accounts of journeys into Wales and Scotland with a focus on the writings of the Flintshire naturalist and antiquarian Thomas Pennant (1726-1798), whose published Tours of both countries did so much to awaken public interest in the ‘peripheries’ of Britain. Find out more
The Scots Syntax Atlas presents the results of over 100,000+ acceptability judgments from over 500 speakers on over 250 morphosyntactic phenomena. The Atlas also contains a text-to-sound aligned corpus of spoken data totalling 275 hours and over 3 million words. Find out more
The University of Glasgow’s Historical Thesaurus of English is a unique resource charting the development of meaning in the huge and varied vocabulary of English. It consists of almost every recorded word in English from Anglo-Saxon times to the present day, all arranged into detailed hierarchies of meaning. Find out more
The resource includes historical research for all Berwickshire place-names on the Ordnance Survey 1:50,000 Landranger map, including more than 1,600 place-names and 7,000 historical forms presented via a series of interactive maps. Find out more
The resource provides ultrasound tongue imaging (UTI) and lip video of speech, magnetic resonance imaging (MRI) video of speech, and 2D midsagittal head animations based on MRI and UTI data. Find out more
The Digital Catalogue documents, visually and textually, the first ten years of Andy Goldsworthy's ephemeral, outdoor practice. It replicates Goldsworthy's Slide Cabinet Index, and includes previously unpublished material from Goldsworthy's Sketchbook Diaries. Find out more
The Scottish Corpora project has created large electronic corpora of written and spoken texts for the languages of Scotland, featuring nearly 4.6 million words of text, with audio recordings to accompany many of the spoken texts. Find out more
As told by some of Scotland's best writers, and illustrated with thousands of images from the collections of the city's world-famous libraries, museums and universities. From football to fashions, Auchenshuggle to Yoker, you'll find it all here. Find out more
Bess of Hardwick's Letters brings together, for the first time, the remarkable letters written to and from Bess of Hardwick (c.1521/2 or 1527-1608), one of Elizabethan England's most famous figures. Find out more
The online catalogue includes some 550 oil paintings and over 1700 works on paper dating from ca 1850 to 1903. The evolution of each painting from sketch to final oil is described and illustrated. Find out more

This was the first full week of the Coronavirus lockdown and as such I was working from home and also having to look after my nine year-old son who is also at home on lockdown.  My wife and I have arranged to split the days into morning and afternoon shifts, with one of us home-schooling our son while the other works during each shift and extra work squeezed in before and after these shifts.  The arrangement has worked pretty well for all of us this week and I’ve managed to get a fair amount of work done.

This included spotting and requesting fixes for a number of other sites that had started to display scary warnings about their SSL certificates, working on an updated version of the Data Management Plan for the SCOSYA follow-on proposal, fixing some log-in and account related issues for the DSL people and helping Carolyn Jess-Cooke in English Literature with some technical issues relating to a WordPress blog she has set up for a ‘Stay at home’ literary festival (https://stayathomefest.wordpress.com/). I also had a conference call with Katie Halsey and Matt Sangster about the Books and Borrowers project, which is due to start at the beginning of June.  It was my first time using the Zoom videoconferencing software and it worked very well, other than my cat trying to participate several times.  We had a good call and made some plans for the coming weeks and months.  I’m going to try and get an initial version of the content management system and database for the project in place before the official start of the project so that the RAs will be able to use this straight away.  This is of even greater importance now as they are likely to be limited in the kinds of research activities they can do at the start of the project because of travel restrictions and will need to work with digital materials.

Other than these issues I divided my time between three projects.  The first was the Burns Supper map for Paul Malgrati in Scottish Literature.  Paul had sent me some images that are to be used in the map and I spent some time integrating these.  The image appears as a thumbnail with credit text (if available) appearing underneath.  If there is a link to the place the image was taken from the credit text appears as a link.  Clicking on the image thumbnail opens the full image in a new tab.  I also added links to the videos where applicable too, but I decided not to embed the videos in the page as I think these would be too small and there would be just too much going on for locations that have both videos and an image.  Paul also wanted clusters to be limited by areas (e.g. a cluster for Scotland rather than these just being amalgamated with a big cluster for Europe when zooming out) and I investigated this.  I discovered that it is possible to create groups of locations.  E.g. have a new column in the spreadsheet named ‘cluster’ or something like that and all the ‘Scotland’ ones could have ‘Scotland’ here, or all the South American ones could have ‘South America’ here.  These will then be the top level clusters and they will not be further amalgamated on zoom out.  Once Paul gets back to me with the clusters he would like for the data I’ll update things further.  Below is an image of the map with the photos embedded: 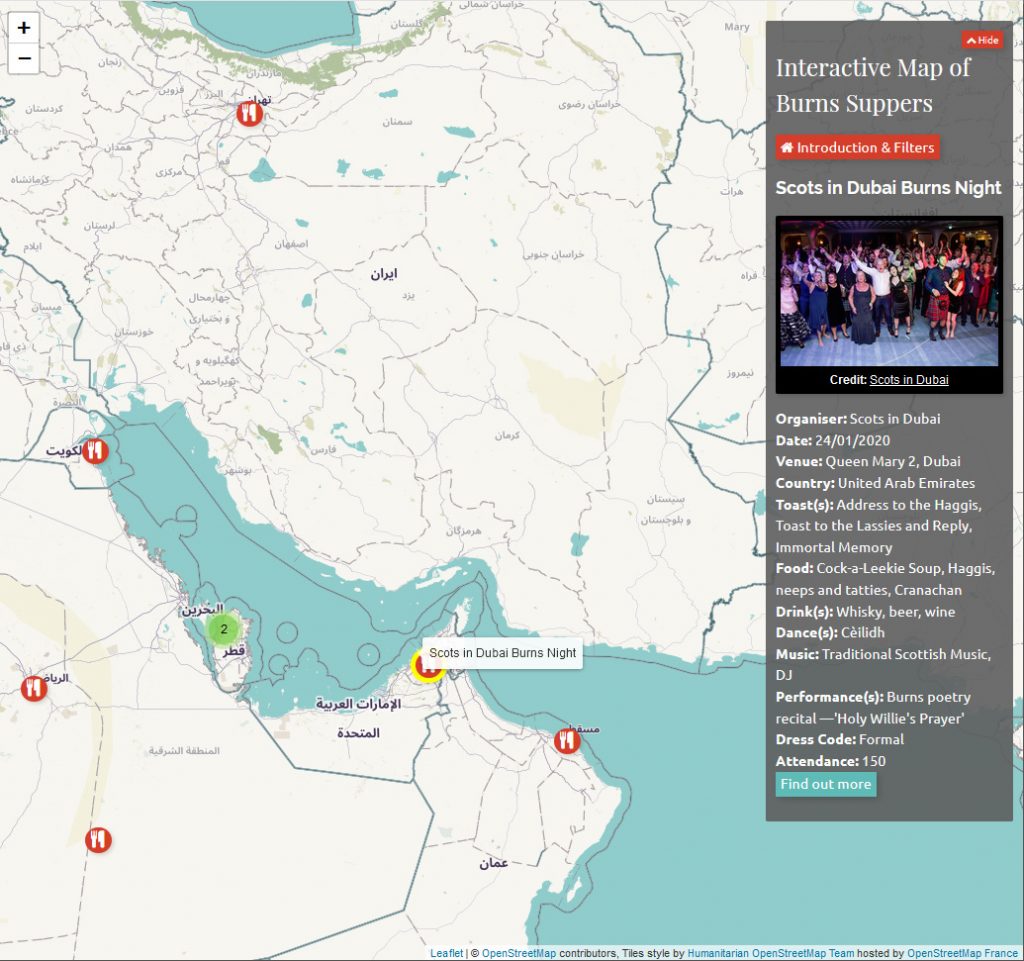 The second major project I worked on was the interactive map for Gerry McKeever’s Regional Romanticism project.  Gerry had got back to me with a new version of the data he’d been working on and some feedback from other people he’d sent the map to.  I created a new version of the map featuring the new data and incorporated some changes to how the map worked based on feedback, namely I moved the navigation buttons to the top of the story pane and have made them bigger, with a new white dividing line between the buttons and the rest of the pane.  This hopefully makes them more obvious to people and means the buttons are immediately visible rather than people potentially having to scroll to see them.  I’ve also replaced the directional arrows with thicker chevron icons and have changed the ‘Return to start’ button to ‘Restart’.  I’ve also made the ‘Next’ button on both the overview and the first slide blink every few seconds, at Gerry’s request.  Hopefully this won’t be too annoying for people.  Finally I made the slide number bigger too.  Here’s a screenshot of how things currently look:

My final project of the week was the Historical Thesaurus.  Marc had previously come up with a very good idea of making a nice interactive ‘guess the category’ quiz that would present a word and four possible categories.  The user would have to select the correct category.  I decided to make a start on this during the week.  The first task was to made a script that grabbed a random category from the database (ensuring it was one that contained at least one non-Old English word).  The script then checked the part of speech of this category and grabbed a further three random categories of the same part of speech.  These were all then exported as a JSON file.  I then worked on the quiz page itself, with all of the logic handled in JavaScript.  The page connects to the script to grab the JSON file then extracts the word and displays it.  It then randomised the order of the four returned categories and displayed these as buttons that a user could click on.  I worked through several iterations of the quiz, but eventually I made it so that upon clicking on a choice the script automatically gives a tick or cross and styles the background red or green.   If the guess was incorrect the user can guess again until they get the correct answer, as you can see below:

I then decided to chain several questions together to make the quiz more fun.  Once the correct answer is given a ‘Next’ button appears, leading to a new question.  I set up a ‘max questions’ variable that controls how many questions there are (e.g. 3, 5 or 10) and the questions keep coming until this number is reached.  When the number is reached the user can then view a summary that tells them which words and (correct) categories were included, provides links to the categories and gives the user an overall score.  I decided that if the user guesses correctly the first time they should get one star.  If they guess correctly a second time they get half a star and any more guesses get no stars.  The summary and star ratings for each question are also displayed as the following screenshot shows: 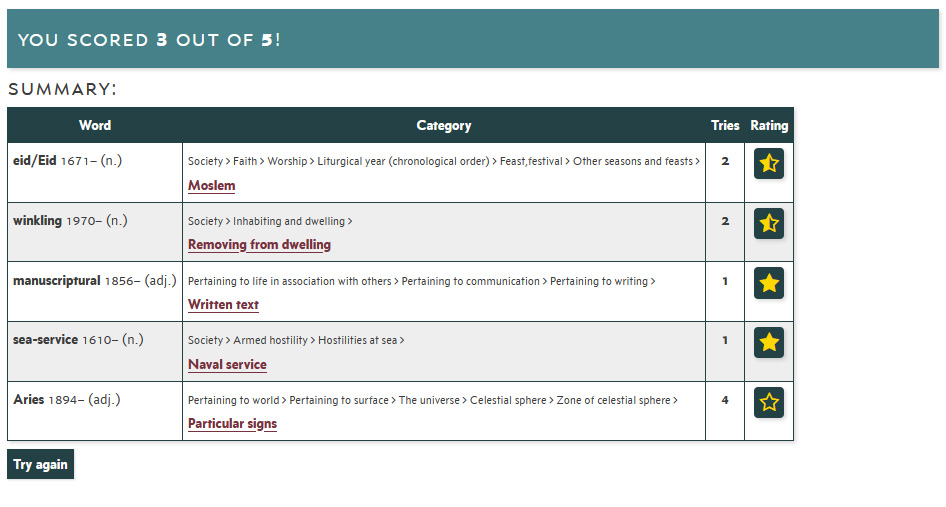 It’s shaping up pretty nicely, but I still need to work on the script that exports data from the database.  Identifying random categories that contain at least one non-OE word and are of the same part of speech as the first randomly chosen category currently means hundreds or even thousands of database calls before a suitable category is returned.  This is inefficient and occasionally the script was getting caught in a loop and timing out before it found a suitable category.  I managed to catch this by having some sample data that loads if a suitable category isn’t found after 1000 attempts, but it’s not ideal.  I’ll need to work on this some more over the next few weeks as time allows.