As told by some of Scotland's best writers, and illustrated with thousands of images from the collections of the city's world-famous libraries, museums and universities. From football to fashions, Auchenshuggle to Yoker, you'll find it all here. Find out more
James McNeill Whistler (1834-1903) was a major figure in 19th century printmaking and created 490 etchings. Over 9500 impressions of these prints have been located and investigated during the project, which completes a series of catalogues raisonnés of Whistler's oeuvre. Find out more
A publicly accessible, online scholarly edition of one of the most important archives of eighteenth-century medical "consultation letters", containing more than 20,000 digitised pages. Find out more
The Scots Syntax Atlas presents the results of over 100,000+ acceptability judgments from over 500 speakers on over 250 morphosyntactic phenomena. The Atlas also contains a text-to-sound aligned corpus of spoken data totalling 275 hours and over 3 million words. Find out more
The project explores Romantic-period accounts of journeys into Wales and Scotland with a focus on the writings of the Flintshire naturalist and antiquarian Thomas Pennant (1726-1798), whose published Tours of both countries did so much to awaken public interest in the ‘peripheries’ of Britain. Find out more
Bess of Hardwick's Letters brings together, for the first time, the remarkable letters written to and from Bess of Hardwick (c.1521/2 or 1527-1608), one of Elizabethan England's most famous figures. Find out more
The resource includes historical research for all Berwickshire place-names on the Ordnance Survey 1:50,000 Landranger map, including more than 1,600 place-names and 7,000 historical forms presented via a series of interactive maps. Find out more
The resource provides ultrasound tongue imaging (UTI) and lip video of speech, magnetic resonance imaging (MRI) video of speech, and 2D midsagittal head animations based on MRI and UTI data. Find out more
The Digital Catalogue documents, visually and textually, the first ten years of Andy Goldsworthy's ephemeral, outdoor practice. It replicates Goldsworthy's Slide Cabinet Index, and includes previously unpublished material from Goldsworthy's Sketchbook Diaries. Find out more
A database of all known people of Scotland between 1093 and 1314 mentioned in over 8600 contemporary documents. It is also being extended to 1371 to include all those lands, peoples and relationships mentioned in royal charters between 1314 and 1371. Find out more

Last week was a full five-day strike and the end of the current period of UCU strike action.  This week I returned to work, but the Coronavirus situation, which has been gradually getting worse over the past few weeks ramped up considerably, with the University closed for teaching and many staff working from home.  I came into work from Monday to Wednesday but the West End was deserted and there didn’t seem much point in me using public transport to come into my office when there was no-one else around so from Thursday onwards I began to work from home, as I will be doing for the foreseeable future.

Despite all of these upheavals and also suffering from a pretty horrible cold I managed to get a lot done this week.  Some of Monday was spend catching up with emails that had come in whilst I had been on strike last week, including a request from Rhona Alcorn of SLD to send her the data and sound files from the Scots School Dictionary and responding to Alan Riach from Scottish Literature about some web pages he wanted updated (these were on the main University site and this is not something I am involved with updating).  I also noticed that the version of this site that was being served up was the version on the old server, meaning my most recent blog posts were not appearing.  Thankfully Raymond Brasas in Arts IT Support was able to sort this out.  Raymond had also emailed me about some WordPress sites I mange that had out of date versions of the software installed.  There were a couple of sites that I’d forgotten about, a couple that were no longer operational and a couple that had legitimate reasons for being out of date, so I got back to him about those, and also updated my spreadsheet of WordPress sites I manage to ensure the ones I’d forgotten about would not be overlooked again.  I also became aware of SSL certificate errors on a couple of websites that were causing the sites to display scary warning messages before anyone could reach the sites, so asked Raymond to fix these.  Finally, Fraser Dallachy, who is working on a pilot for a new Scots Thesaurus, contacted me to see if he could get access to the files that were used to put together the first version of the Concise Scots Dictionary.  We had previously established that any electronic files relating to the printed Scots Thesaurus have been lost and he was hoping that these old dictionary files may contain data that was used in this old thesaurus.  I managed to track the files down, but alas there appeared to be no semantic data in the entries found therein.  I also had a chat with Marc Alexander about a little quiz he would like to develop for the Historical Thesaurus.

I spoke to Jennifer Smith on Monday about the follow-on funding application for her SCOSYA project and spent a bit of time during the week writing a first draft of a Data Management Plan for the application, after reviewing all of the proposal materials she had sent me.  Writing the plan raised some questions and I will no doubt have to revise the plan before the proposal is finalised, but it was good to get a first version completed and sent off.

I also finished work on the interactive map for Gerry McKeever’s Regional Romanticism project this week.  Previously I’d started to use a new plugin to get nice curved lines between markers and all appeared to be working well.  This week I began to integrate the plugin with my map, but unfortunately I’m still encountering unusable slowdown with the new plugin.  Everything works fine to begin with, but after a bit of scrolling and zooming, especially round an area with lots of lines, the page becomes unresponsive.  I wondered whether the issue might be related to the midpoint of the curve being dynamically generated from a function I took from another plugin so instead made a version that generated and then saved these midpoints that could then be used without needing to be calculated each time.  This would also have meant that we could have manually tweaked the curves to position them as desired, which would have been great as some lines were not ideally positioned (e.g. from Scotland to the US via the North Pole), but even this seems to have made little impact on the performance issues.  I even tried turning everything else off (e.g. icons, popups, the NLS map) to see if I could identify another cause of the slowdown but nothing has worked.  I unfortunately had to admit defeat and resort to using straight lines after all.  These are somewhat less visually appealing, but they result in no performance issues.  Here’s a screenshot of this new version: 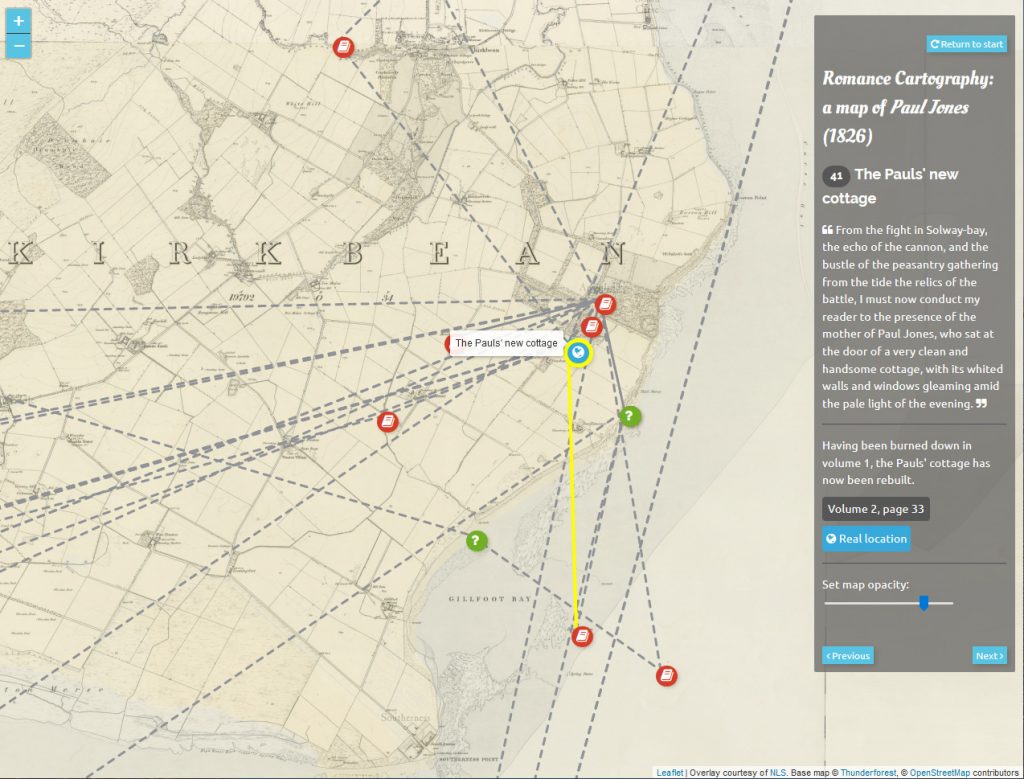 With these updates in place I made a version of the map that would run directly on the desktop and sent Gerry some instructions on how to update the data, meaning he can continue to work on it and see how it looks.  But my work on this is now complete for the time being.

I was supposed to meet with Paul Malgrati from Scottish Literature on Wednesday to discuss an interactive map of Burns Suppers he would like me to create.  We decided to cancel our meeting due to the Coronavirus, but continued to communicate via email.  Paul had sent me a spreadsheet containing data relating to the Burns Suppers and I spent some time working on some initial versions of the map, reusing some of the code from the Regional Romanticism map, which in turn used code from the SCOSYA map.

I migrated the spreadsheet to an online database and then wrote a script that exports this data in the JSON format that can be easily read into the map.  The initial version uses OpenStreetMap.HOT as a basemap rather than the .DE one that Paul had selected as the latter displays all place-names in German where these are available (e.g. Großbritannien).  The .HOT map is fairly similar, although for some reason parts of South America look like they’re underwater.  We can easily change to an alternative basemap in future if required.  In my initial version all locations are marked with red icons displaying a knife and fork.  We can use other colours or icons to differentiate types if or when these are available.  The map is full screen with an introductory panel in the top right.  Hovering over an icon displays the title of the event while clicking on it replaces the introductory panel with a panel containing the information about the supper.  The content is generated dynamically and only displays fields that contain data (e.g. very few include ‘Dress Code’).  You can always return to the intro by clicking on the ‘Introduction’ button at the top.

I spotted a few issues with the latitude and longitude of some locations that will need fixed.  E.g. St Petersburg has Russia as the country but it is positioned in St Petersburg in Florida while Bogota Burns night in Colombia is positioned in South Sudan.  I also realised that we might want to think about grouping icons as when zoomed out it’s difficult to tell where there are multiple closely positioned icons – e.g. the two in Reykjavik and the two in Glasgow.  However, grouping may be tricky if different locations are assigned different icons / types.

After further email discussions with Paul (and being sent a new version of the spreadsheet) I created an updated version of my initial map.  This version incorporates the data from the spreadsheet and incorporates the new ‘Attendance’ field into the pop-up where applicable.  It is also now possible to zoom further out, and also scroll past the international dateline and still see the data (in the previous version if you did this the data would not appear).  I also integrated the Leaflet Plugin MarkerCluster (see https://github.com/Leaflet/Leaflet.markercluster) that very nicely handles clustering of markers.  In this new version of my map markers are now grouped into clusters that split apart as you zoom in.  I also added in an option to hide and show the pop-up area as on small screens (e.g. mobile phones) the area takes up a lot of space, and if you click on a marker that is already highlighted this now deselects the marker and closes the popup.  Finally, I added a new ‘Filters’ section in the introduction that you can show or hide.  This contains options to filter the data by period.  The three periods are listed (all ‘on’ be default’) and you can deselect or select any of them.  Doing so automatically updates the map to limit the markers to those that meet the criteria.  This is ‘remembered’ as you click on other markers and you can update your criteria by returning to the introduction.  I did wonder about adding a summary of the selected filters to the popup of every marker, but I think this will just add too much clutter, especially when viewing the map on smaller screens (these days most people access websites on tablets or phones).  Here is an example of the map as it currently looks: 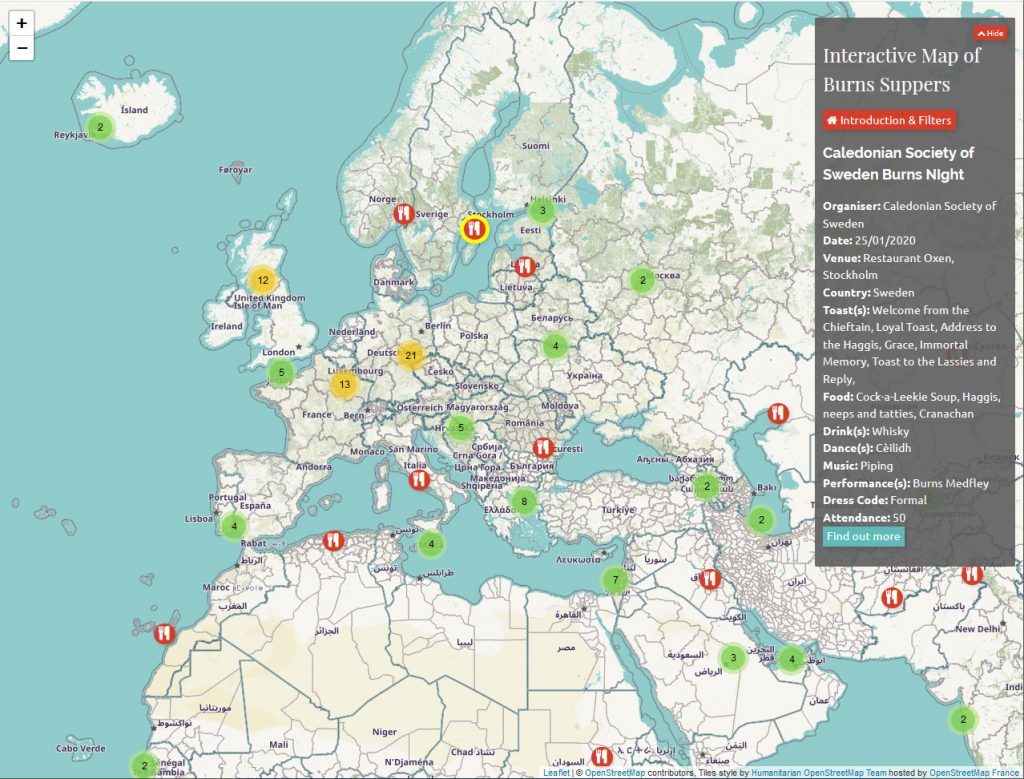 The main things left to do are adding more filters and adding in images and videos, but I’ll wait until Paul sends me more data before I do anything further.  That’s all for this week.  I’ll just need to see how work progresses over the next few weeks as with the schools now shut I’ll need to spent time looking after my son in addition to tackling my usual work.