The resource provides ultrasound tongue imaging (UTI) and lip video of speech, magnetic resonance imaging (MRI) video of speech, and 2D midsagittal head animations based on MRI and UTI data. Find out more
The resource includes historical research for all Berwickshire place-names on the Ordnance Survey 1:50,000 Landranger map, including more than 1,600 place-names and 7,000 historical forms presented via a series of interactive maps. Find out more
The Scots Syntax Atlas presents the results of over 100,000+ acceptability judgments from over 500 speakers on over 250 morphosyntactic phenomena. The Atlas also contains a text-to-sound aligned corpus of spoken data totalling 275 hours and over 3 million words. Find out more
The Scottish Corpora project has created large electronic corpora of written and spoken texts for the languages of Scotland, featuring nearly 4.6 million words of text, with audio recordings to accompany many of the spoken texts. Find out more
The University of Glasgow’s Historical Thesaurus of English is a unique resource charting the development of meaning in the huge and varied vocabulary of English. It consists of almost every recorded word in English from Anglo-Saxon times to the present day, all arranged into detailed hierarchies of meaning. Find out more
The online catalogue includes some 550 oil paintings and over 1700 works on paper dating from ca 1850 to 1903. The evolution of each painting from sketch to final oil is described and illustrated. Find out more
The project provides a richly-illustrated Catalogue of all known architectural projects by Charles Rennie Mackintosh, including over 1200 drawings by Mackintosh and the practice, analytical and contextual essays, a timeline and glossary. Find out more
Bess of Hardwick's Letters brings together, for the first time, the remarkable letters written to and from Bess of Hardwick (c.1521/2 or 1527-1608), one of Elizabethan England's most famous figures. Find out more
James McNeill Whistler (1834-1903) was a major figure in 19th century printmaking and created 490 etchings. Over 9500 impressions of these prints have been located and investigated during the project, which completes a series of catalogues raisonnés of Whistler's oeuvre. Find out more
A database of all known people of Scotland between 1093 and 1314 mentioned in over 8600 contemporary documents. It is also being extended to 1371 to include all those lands, peoples and relationships mentioned in royal charters between 1314 and 1371. Find out more

Week seven of lockdown continued in much the same fashion as the preceding weeks, the only difference being Friday was a holiday to mark the 75th anniversary of VE day.  I spent much of the four working days on the development of the content management system for the Books and Borrowing project.  The project RAs will start using the system in June and I’m aiming to get everything up and running before then so this is my main focus at the moment.  I also had a Zoom meeting with project PI Katie Halsey and Co-I Matt Sangster on Tuesday to discuss the requirements document I’d completed last week and the underlying data structures I’d defined in the weeks before.  Both Katie and Matt were very happy with the document, although Matt had a few changes he wanted made to the underlying data structures and the CMS.  I made the necessary changes to the data design / requirements document and the project’s database that I’d set up last week.  The changes were:

Borrowing spans have now been removed from libraries and these will instead be automatically inferred based on the start and end dates of ledger records held in these libraries.  Ledgers now have a new ‘ledger type’ field which currently allows the choice of ‘Professorial’, ‘Student’ or ‘Town’.  This field will allow borrowing spans for libraries to be altered based on a selected ledger type.  The way occupations for borrowers is recorded has been updated to enable both original occupations from the records and a normalised list of occupations to be recorded.  Borrowers may not have an original occupation but still might have a standardised occupation so I’ve decided to use the occupations table as previously designed to hold information about standardised occupations.  A borrower may have multiple standardised occupations.  I have also added a new ‘original occupation’ field to the borrower record where any number of occupations found for the borrower in the original documentation (e.g. river watcher) can be added if necessary.  The book edition table now has an ‘other authority URL’ field and an ‘other authority type’ field which can be used if ESTC is not appropriate.  The ‘type’ currently features ‘Worldcat’, ‘CERL’ and ‘Other’ and ‘Language’ has been moved from Holding to Edition.  Finally, in Book Holding the short title is now original title and long title is now standardised title while the place and date of publication fields have been removed as the comparable fields at Edition level will be sufficient.

In terms of the development of the CMS, I created a Bootstrap-based interface for the system, which currently just uses the colour scheme I used for Matt’s pilot 18th Century Borrowing project.  I created the user authentication scripts and the menu structure and then started to create the actual pages.  So far I’ve created a page to add a new library record and all of the information associated with a library, such as any number of sources.  I then created the facility to browse and delete libraries and the main ‘view library’ page, which will act as a hub through which all book and borrowing records associated with the library will be managed.  This page has a further tab-based menu with options to allow the RA to view / add ledgers, additional fields, books and borrowers, plus the option to edit the main library information.  So far I’ve completed the page to edit the library information and have started work on the page to add a ledger.  I’m making pretty good progress with the CMS, but there is still a lot left to do.  Here’s a screenshot of the CMS if you’re interested in how it looks: 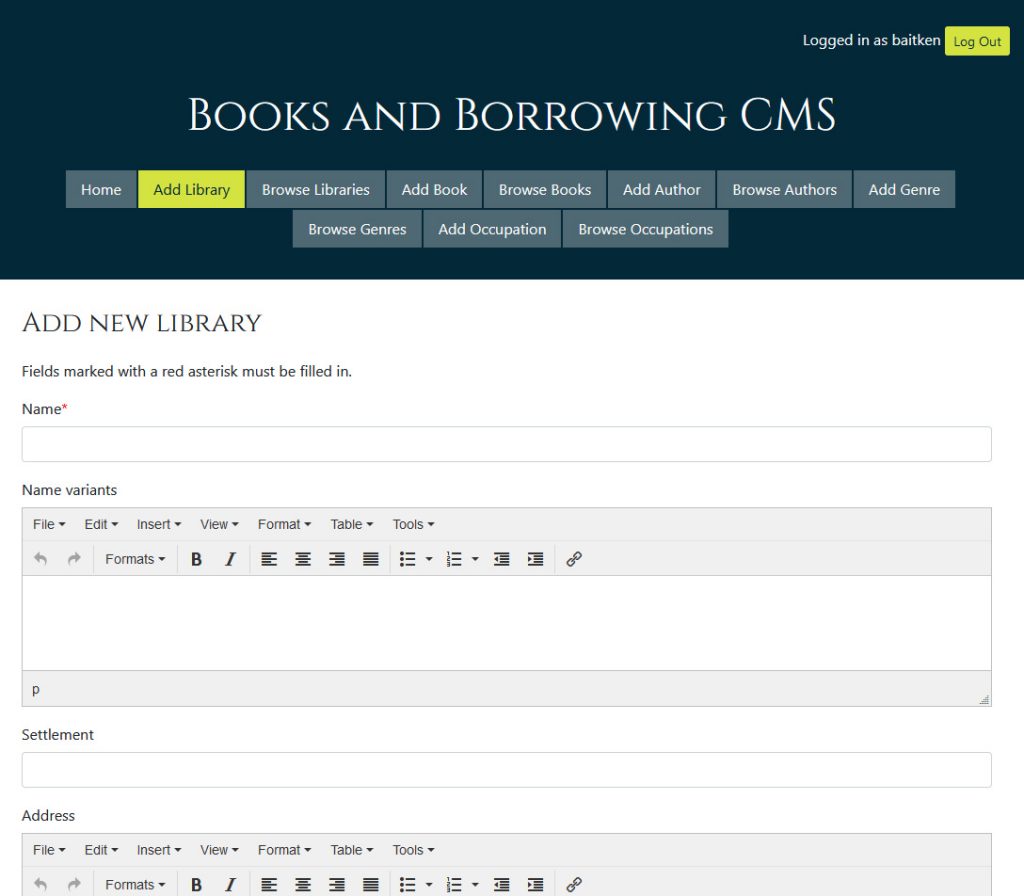 Also this week I had a Zoom meeting the Marc Alexander and Fraser Dallachy to discuss update to the Historical Thesaurus as we head towards a second edition.  This will include adding in new words from the OED and new dates for existing words.  My new date structure will also go live, so there will need to be changes to how the timelines work.  Marc is hoping to go live with new updates in August.  We also discussed the ‘guess the category’ quiz, with Marc and Fraser having some ideas about limiting the quiz to certain categories, or excluding other categories that might feature inappropriate content.  We may also introduce a difficulty level based on date, with an ‘easy’ version only containing words that were in use for a decent span of time in the past 200 years.

Other work I did this week included making some tweaks to the data for Gerry McKeever’s interactive map, fixing an issue with videos continuing to play after the video overlay was closed for Paul Malgrati’s Burns Supper map, replying to a query from Alasdair Whyte about his Place-names of Mull and Ulva project and looking into an issue for Fraser’s Scots Thesaurus project which unfortunately I can’t do anything about as the scripts I’d created for this (which needed to be let running for several days) are on the computer in my office.  If this lockdown ever ends I’ll need to tackle this issue then.