The Scottish Corpora project has created large electronic corpora of written and spoken texts for the languages of Scotland, featuring nearly 4.6 million words of text, with audio recordings to accompany many of the spoken texts. Find out more
The Metaphor Map of English shows the metaphorical links which have been identified between different areas of meaning. These links can be from the Anglo-Saxon period right up to the present day so the map covers 1300 years of the English language. Find out more
A publicly accessible, online scholarly edition of one of the most important archives of eighteenth-century medical "consultation letters", containing more than 20,000 digitised pages. Find out more
The project provides a richly-illustrated Catalogue of all known architectural projects by Charles Rennie Mackintosh, including over 1200 drawings by Mackintosh and the practice, analytical and contextual essays, a timeline and glossary. Find out more
The project explores Romantic-period accounts of journeys into Wales and Scotland with a focus on the writings of the Flintshire naturalist and antiquarian Thomas Pennant (1726-1798), whose published Tours of both countries did so much to awaken public interest in the ‘peripheries’ of Britain. Find out more
The Scots Syntax Atlas presents the results of over 100,000+ acceptability judgments from over 500 speakers on over 250 morphosyntactic phenomena. The Atlas also contains a text-to-sound aligned corpus of spoken data totalling 275 hours and over 3 million words. Find out more
The resource includes historical research for all Berwickshire place-names on the Ordnance Survey 1:50,000 Landranger map, including more than 1,600 place-names and 7,000 historical forms presented via a series of interactive maps. Find out more
As told by some of Scotland's best writers, and illustrated with thousands of images from the collections of the city's world-famous libraries, museums and universities. From football to fashions, Auchenshuggle to Yoker, you'll find it all here. Find out more
The Digital Catalogue documents, visually and textually, the first ten years of Andy Goldsworthy's ephemeral, outdoor practice. It replicates Goldsworthy's Slide Cabinet Index, and includes previously unpublished material from Goldsworthy's Sketchbook Diaries. Find out more
The online catalogue includes some 550 oil paintings and over 1700 works on paper dating from ca 1850 to 1903. The evolution of each painting from sketch to final oil is described and illustrated. Find out more
project 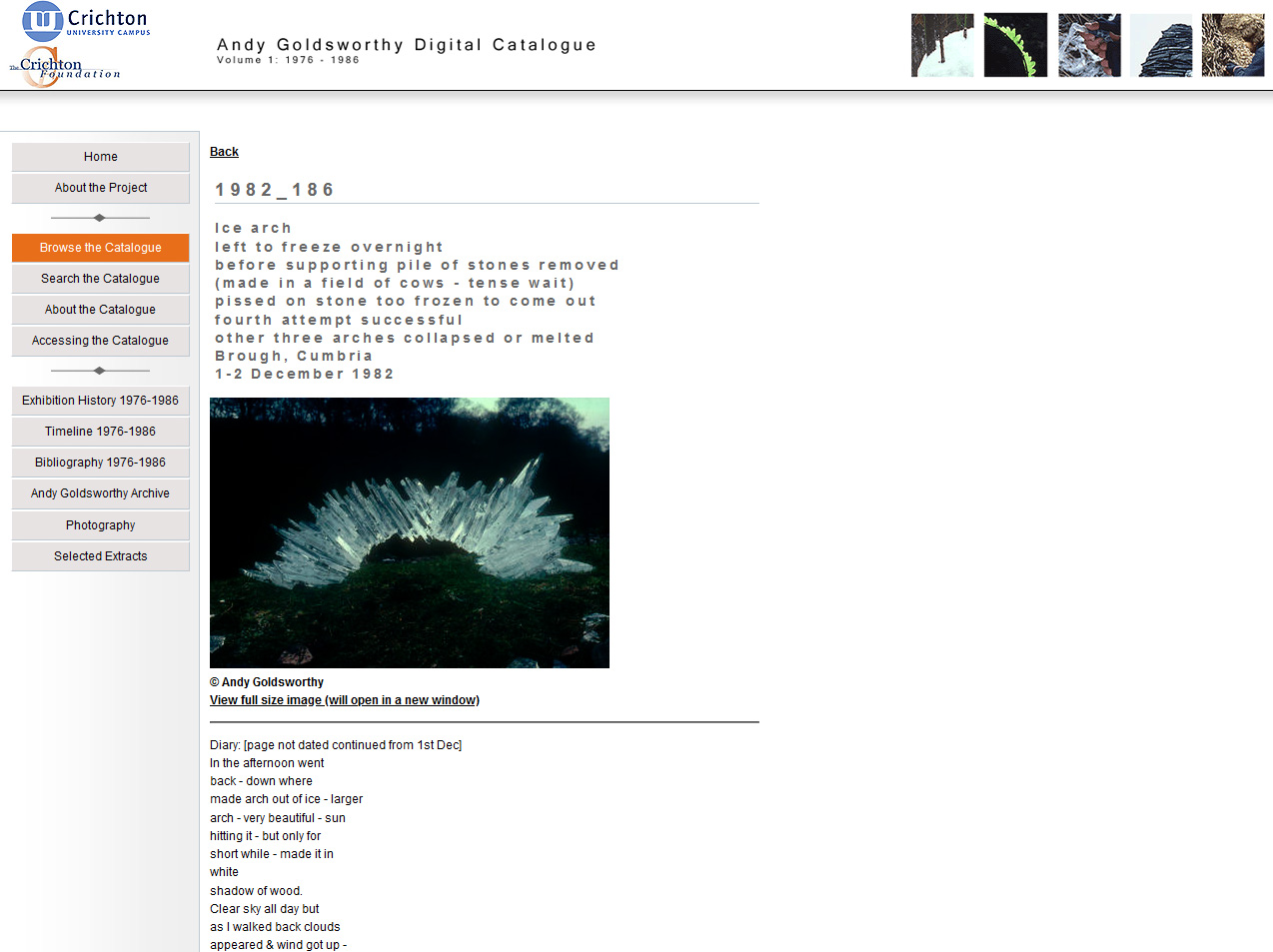 The Andy Goldsworthy Digital Catalogue is the result of a collaborative effort involving Andy Goldsworthy, The Crichton Foundation, and University of Glasgow's Crichton Campus and Humanities Advanced Technology and Information Institute (now Information Studies). The Digital Catalogue constitutes a unique resource: comprising approximately 3,500 images, it documents the 2,700 or so sculptures that Goldsworthy made in the ten-year period 1976-1986, and gives unprecedented access to Goldsworthy's early working practices and contexts.

Professor Rex Taylor, Director of the University of Glasgow's Crichton Campus 1999-2005, and Tom Pow initially discussed the possibility of developing a collaborative project during a visit that they made to Andy Goldsworthy's studio in Penpont, Dumfriesshire in 2001.

On that occasion, they sowed the germ of an idea: the possibility of digitising and cataloguing Goldsworthy's Slide Cabinet Index, and of locating the resulting Digital Catalogue at the University of Glasgow's Crichton Campus. Goldsworthy was particularly keen to support his 'home' campus, and it was intended that the resulting resource would be made available to international scholars and researchers through the Crichton.

Professor Taylor enlisted vital support from Barbara Kelly, Convenor of the Crichton Foundation, and from Professor Seamus Ross, Director of the University of Glasgow's HATII (Humanities Advanced Technology and Information Institute), whose department has provided technical expertise and support throughout the project's duration.

The project brief focused on Goldsworthy's Slide Cabinet Index, and the considerable collection of slides and transparencies that document his ephemeral practice. Its aims were as follows:

It was decided to dedicate on the efforts of the project on the first ten years of Goldsworthy's practice, insofar that material was deemed most vulnerable, and because it includes a significant proportion of early work not known or accessible to the research community. 1976-1986 brackets the period in which Goldsworthy established the principles of his practice. It is characterised by experimentation and exploration, and is prior to Goldsworthy's gaining gallery representation in 1987.