James McNeill Whistler (1834-1903) was a major figure in 19th century printmaking and created 490 etchings. Over 9500 impressions of these prints have been located and investigated during the project, which completes a series of catalogues raisonnés of Whistler's oeuvre. Find out more
The resource includes historical research for all Berwickshire place-names on the Ordnance Survey 1:50,000 Landranger map, including more than 1,600 place-names and 7,000 historical forms presented via a series of interactive maps. Find out more
The University of Glasgow’s Historical Thesaurus of English is a unique resource charting the development of meaning in the huge and varied vocabulary of English. It consists of almost every recorded word in English from Anglo-Saxon times to the present day, all arranged into detailed hierarchies of meaning. Find out more
As told by some of Scotland's best writers, and illustrated with thousands of images from the collections of the city's world-famous libraries, museums and universities. From football to fashions, Auchenshuggle to Yoker, you'll find it all here. Find out more
The Digital Catalogue documents, visually and textually, the first ten years of Andy Goldsworthy's ephemeral, outdoor practice. It replicates Goldsworthy's Slide Cabinet Index, and includes previously unpublished material from Goldsworthy's Sketchbook Diaries. Find out more
The project explores Romantic-period accounts of journeys into Wales and Scotland with a focus on the writings of the Flintshire naturalist and antiquarian Thomas Pennant (1726-1798), whose published Tours of both countries did so much to awaken public interest in the ‘peripheries’ of Britain. Find out more
The Scots Syntax Atlas presents the results of over 100,000+ acceptability judgments from over 500 speakers on over 250 morphosyntactic phenomena. The Atlas also contains a text-to-sound aligned corpus of spoken data totalling 275 hours and over 3 million words. Find out more
The resource provides ultrasound tongue imaging (UTI) and lip video of speech, magnetic resonance imaging (MRI) video of speech, and 2D midsagittal head animations based on MRI and UTI data. Find out more
A database of all known people of Scotland between 1093 and 1314 mentioned in over 8600 contemporary documents. It is also being extended to 1371 to include all those lands, peoples and relationships mentioned in royal charters between 1314 and 1371. Find out more
The Scottish Corpora project has created large electronic corpora of written and spoken texts for the languages of Scotland, featuring nearly 4.6 million words of text, with audio recordings to accompany many of the spoken texts. Find out more

We launched the new version of the DSL website on Tuesday this week, which involved switching the domain name to point at the new server where I’d been developing the new site.  When we’ve done this previously (e.g. for the Anglo-Norman Dictionary) the switchover has been pretty speedy, but this time it took about 24 hours for the DNS updates to propagate, during which time the site was working for some people and not for others.  This is because there is a single SSL certificate for the dsl.ac.uk domain and as it was moved to the new server, the site on the old server (which was still being accessed by people whose ISP’s had not updated their domain name servers) was displaying a certificate error.  This was all a bit frustrating as the problem was out of our hands, but thankfully everything was working normally again by Wednesday.

I made a few final tweaks to the site this week too, including updating the text that is displayed when too many results are returned, updating the ‘cite this entry’ text, fixing a few broken links and fixing the directory permissions on the new site to allow file uploads.  I also gave some advice about the layout of a page for a new Scots / Polish app that the DSL people are going to publish.

I spent almost all of the rest of the week working on the Speak For Yersel project, for which I still have an awful lot to do in a pretty short period of time, as we need to pilot the resource in schools during the week of the 13th of June and need to sent it out to other people for testing and to populate it with initial data before then.  We had a team meeting on Thursday to go through some of the outstanding tasks, which was helpful.

This week I worked on the maps quite a bit, making the markers smaller and giving them a white border to help them stand out a bit.  I updated the rating colours as suggested, although I think we might need to change some of the shades used for ratings and words as after using the maps quite a bit I personally find it almost impossible to differentiate some of the shades, as you can see in the screenshot below.  We have all the colours of the rainbow at our disposal and while I can appreciate why shades are preferred from an aesthetical point of view, in terms of usability it seems a bit silly to me.  I remember having this discussion with SCOSYA too.  I think it is MUCH easier to read the maps when different colours are used, as with Our Dialects (e.g. https://www.ourdialects.uk/maps/bread/). 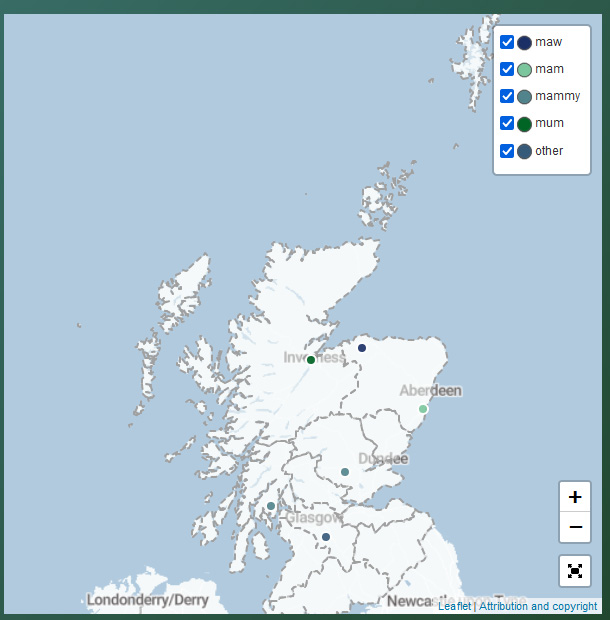 As you can also see from the above screenshot, I implemented the map legends as well, with only the options that have been chosen and have data appearing in the legend.  Options appear with their text, a coloured spot so you can tell which option is which, and a checkbox that allows you to turn on / off a particular answer, which I think will be helpful in differentiating the data once the map fills up.  For the ‘sound choice’ questions a ‘play’ button appears next to each option in the legend.  I then ensured that the maps work for the quiz questions too: rather than showing a map of answers submitted for the quiz question the maps now display the data for the associated questionnaire (e.g. the ‘Gonnae you’ map).  Maps are also now working for the ‘Explore more’ section too.  I also added in the pop-up for ‘Attribution and Copyright’ (the link in the bottom right of the map).

I then added further quiz questions to the ‘Give your word’ exercise, but the final quiz question in the document I was referencing had a very different structure, with multiple specific answer options from several different questions on the same map.  I spent about half a day making updates to the system to allow for such a question structure.  I needed to update the database structure, the way data is pulled into the website, the way maps are generated, how quiz questions are displayed and how they are processed.

The multi-choice quiz works in a similar way to the multi-choice questionnaire in that you can select more than one answer.  Unlike the questionnaire there is no limit to the number of options you can select.  When at least one choice is selected a ‘check your answers’ button appears.  The map displays all of the data for each of the listed words, even though these come from different questionnaires (this took some figuring out).  There are 9 words here and we only have 8 shades so the ninth is currently appearing as red.  The map legend lists the words alphabetically, which doesn’t match up with the quiz option order, but I can’t do anything about this (at least not without a lot of hacking about).  You can turn off/on map layers to help see the coverage. 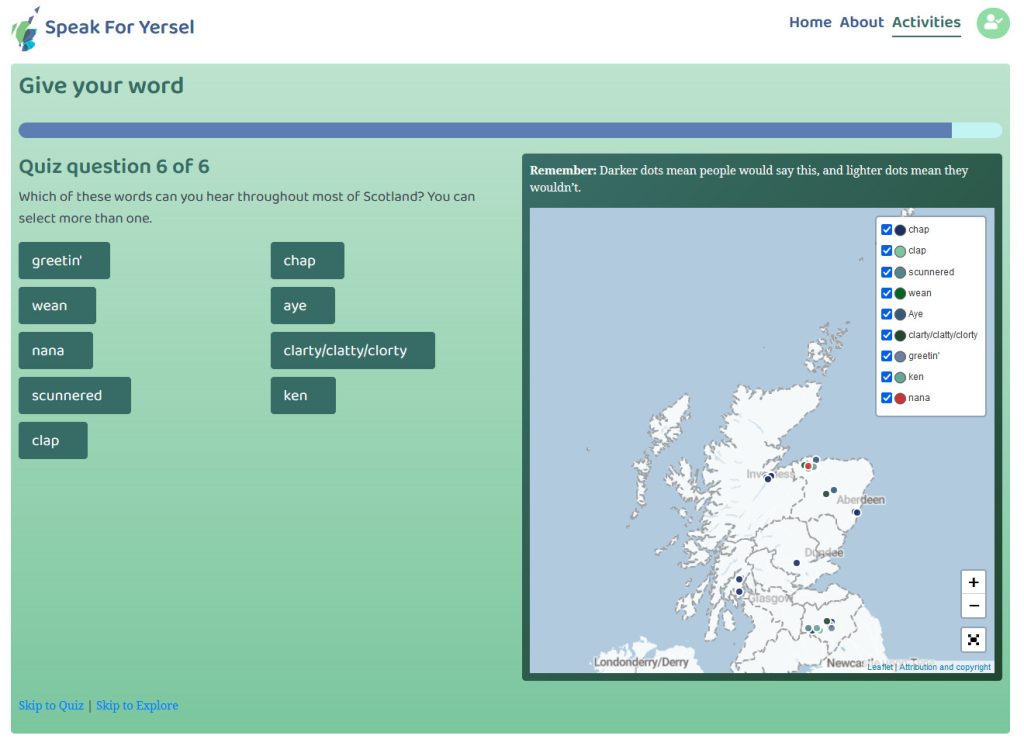 Unfortunately, when we met on Thursday it turned out that Jennifer and Mary were not wanting this question to be presented on one single map, but instead for each answer option to have its own map, meaning the time I spent developing the above was wasted.  However, it does mean the question is much more simple, which is probably a good thing.  We decided to split the question up into individual questions to make things more straightforward for users and to ensure that getting one of the options incorrect didn’t mean they were marked as getting the entire multi-part question wrong.

Also this week I began implementing the perception questionnaire with seven interactive sliders allowing the user to rate an accent.  Styling the sliders was initially rather tricky but thankfully I found a handy resource that allows you to customise a slider and generates the CSS for you (https://www.cssportal.com/style-input-range/).  Below is a screenshot of the perception activity as it currently stands: 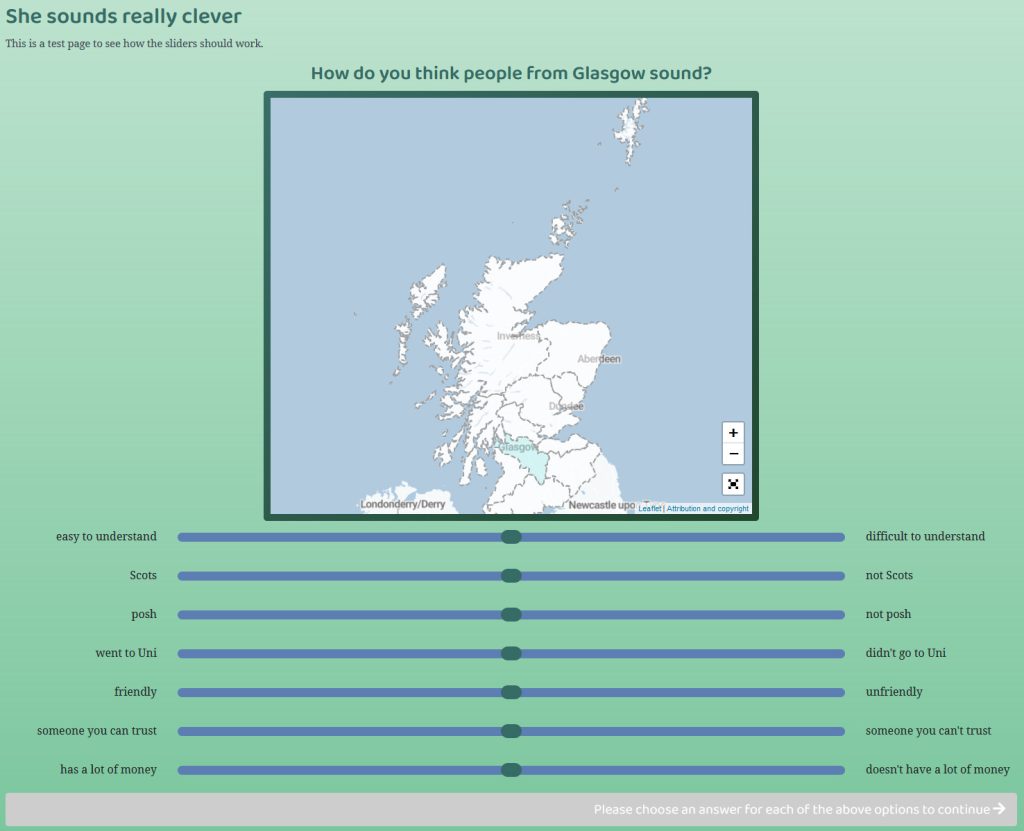 I also replaced one of the sound recordings and fixed the perception activity layout on narrow screens (as previously on narrow screens the labels ended up positioned at the wrong ends of the slider).  I added a ‘continue’ button under the perception activity that is greyed out and added a check to see whether the user has pressed on every slider.  If they have then the ‘continue’ button text changes and is no longer greyed out.  I also added area names to the top-left corner of the map when you hover over an area, so now no-one will confuse Orkney and Shetland!

We had also agreed to create a ‘more activities’ page and to have follow-on activities and the ‘explore more’ maps situated there.  I created a new top-level menu item currently labelled ‘More’.  If you click on this you find an index page similar to the ‘Activities’ page.  Press on an option (only the first page options work so far) and you’re given the choice to either start the further activities (not functioning yet) or explore the maps.  The latter is fully functional.  In the regular activities page I then removed the ‘explore more stage’ so that now when you finish the quiz the button underneath your score leads you to the ‘More’ page for the exercise in question.  Finally, I began working on the follow-on activities that display age-based maps, but I’ll discuss these in more detail next week.

I also spoke to Laura Rattray and Ailsa Boyd about a proposal they are putting together and arranged a Zoom meeting with them in a couple of weeks and spoke to Craig Lamont about the Ramsay project I’m hopefully going to be able to start working on next week.