Bess of Hardwick's Letters brings together, for the first time, the remarkable letters written to and from Bess of Hardwick (c.1521/2 or 1527-1608), one of Elizabethan England's most famous figures. Find out more
James McNeill Whistler (1834-1903) was a major figure in 19th century printmaking and created 490 etchings. Over 9500 impressions of these prints have been located and investigated during the project, which completes a series of catalogues raisonnés of Whistler's oeuvre. Find out more
A publicly accessible, online scholarly edition of one of the most important archives of eighteenth-century medical "consultation letters", containing more than 20,000 digitised pages. Find out more
The Digital Catalogue documents, visually and textually, the first ten years of Andy Goldsworthy's ephemeral, outdoor practice. It replicates Goldsworthy's Slide Cabinet Index, and includes previously unpublished material from Goldsworthy's Sketchbook Diaries. Find out more
The Scots Syntax Atlas presents the results of over 100,000+ acceptability judgments from over 500 speakers on over 250 morphosyntactic phenomena. The Atlas also contains a text-to-sound aligned corpus of spoken data totalling 275 hours and over 3 million words. Find out more
As told by some of Scotland's best writers, and illustrated with thousands of images from the collections of the city's world-famous libraries, museums and universities. From football to fashions, Auchenshuggle to Yoker, you'll find it all here. Find out more
The University of Glasgow’s Historical Thesaurus of English is a unique resource charting the development of meaning in the huge and varied vocabulary of English. It consists of almost every recorded word in English from Anglo-Saxon times to the present day, all arranged into detailed hierarchies of meaning. Find out more
The project explores Romantic-period accounts of journeys into Wales and Scotland with a focus on the writings of the Flintshire naturalist and antiquarian Thomas Pennant (1726-1798), whose published Tours of both countries did so much to awaken public interest in the ‘peripheries’ of Britain. Find out more
The resource includes historical research for all Berwickshire place-names on the Ordnance Survey 1:50,000 Landranger map, including more than 1,600 place-names and 7,000 historical forms presented via a series of interactive maps. Find out more
The Scottish Corpora project has created large electronic corpora of written and spoken texts for the languages of Scotland, featuring nearly 4.6 million words of text, with audio recordings to accompany many of the spoken texts. Find out more

I continued to develop the public interface for the SCOSYA project this week, and also helped out with the preparations for next week’s Data Hack event that the project is organising, which involved sorting out hosted for a lot of sample data.  On Monday I had a meeting with Jennifer and E, at which we went through the interface I had so far created and discussed things that needed updated or changed in some way.  It was a useful meeting and I came away with a long list of things to do, which I then spent quite some time during the remainder of the week implementing.  This included changing the font used throughout the site and drastically changing the base layer we use for the maps.  I had previously created a very simple ‘green land, blue sea’ base map, which is what the team had requested, but they wanted to try something a bit simpler still – white sea and light grey land – in order to emphasise the data points more than anything else.  I also removed all place-names from the map and in fact everything other than borders and water.  I also updated the colour range used for ratings, from a yellow to red scheme to a more grey / purple scheme that had been suggested by E.  This is now used both for the markers and for the areas.  Regarding areas, I removed the white border from the areas to make areas with the same rating blend into one another and make the whole thing look more like a heatmap, as the following screenshot demonstrates: 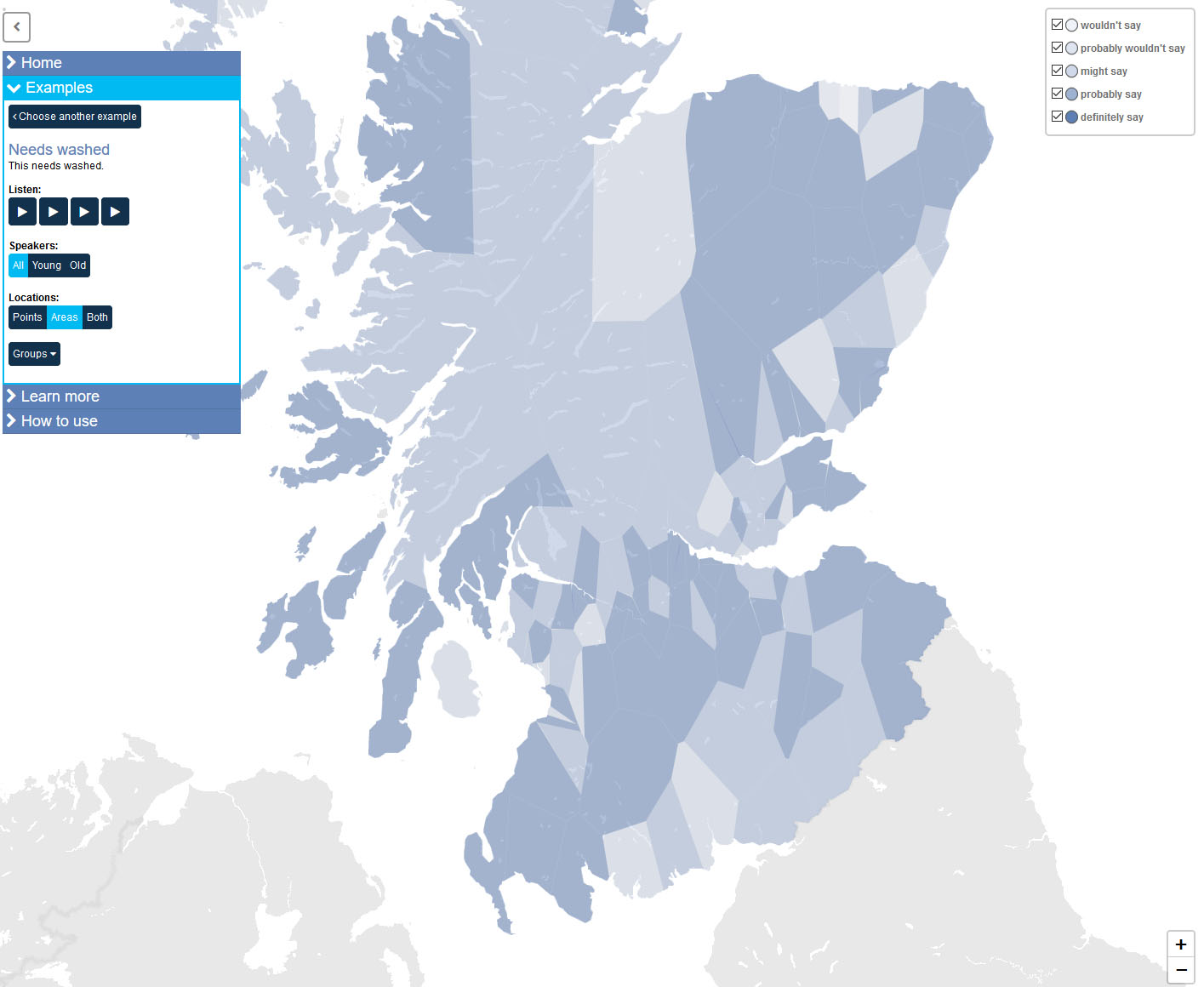 I also completely changed the way the pop-ups look, as it was felt that the previous version was just a bit too garish and comic book like.  The screenshot below shows markers with a pop-up open: 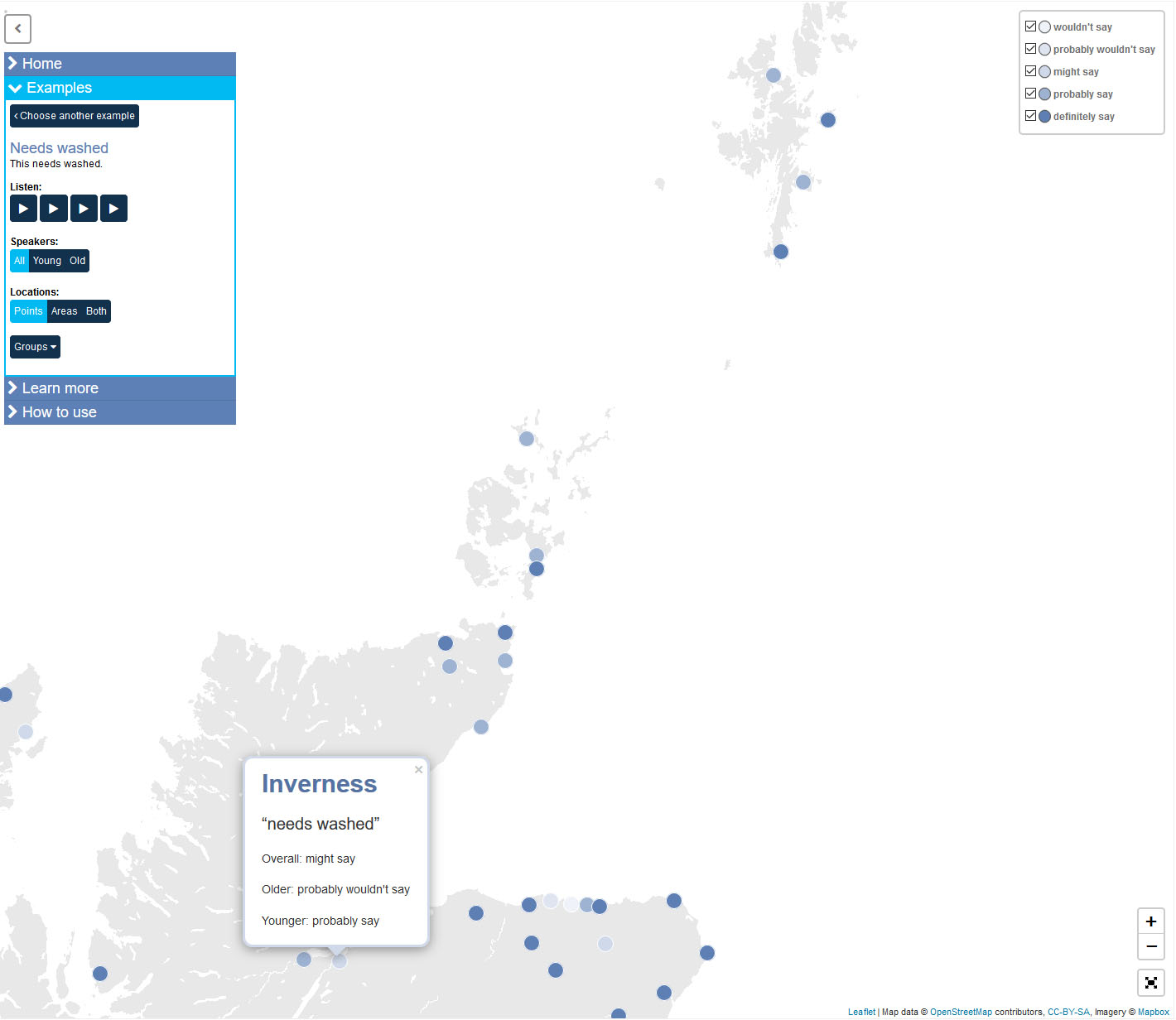 I also figured out how to add sound clips to story slides and I’ve changed how the selection of ‘examples’ works.  Rather than having a drop-down list and then all of the information about a selected feature displayed underneath I have split things up.  Now when you open the ‘Examples’ section you will see the examples listed as a series of buttons.  Pressing on one of these then loads the feature, automatically loading the data for it into the map.  There’s a button for returning to the list of examples, then the feature’s title and description, followed by sound clips if there are any are displayed.  Underneath this are the buttons for changing ‘speakers’ and ‘locations’.  Pressing on one of these options now automatically refreshes the map so there’s no longer any need for a ‘Show’ button. I think this works much better.  Note that your choice of speaker and location is remembered when using the map – e.g. if you have selected ‘Young’ and ‘Areas’ then go back and select a different example then the map will default to ‘Young’ and ‘Areas’ when this new feature is displayed.

I’ve also added a check for screen size that fires every time a side panel section is opened.  This ensures that if someone has resized their browser or changed the orientation of their screen the side panel should still fit. I still haven’t had time to get the ‘groups’ feature working yet, or to fix the display of stories on smaller screens.  I also need to update the ‘Learn more’ section so it uses a list rather than a drop-down box, all tasks I hope to continue with next week.

I also spent a bit of time on the Seeing Speech and Dynamic Dialects projects, helping to add in a new survey for each, participated in the monthly College of Arts developers coffee catch-up and advised a couple of members of staff on blog related issues and spoke to Kirsteen McCue about the proposal she’s putting together.

Other than these tasks I spent about a day working on DSL issues.  This included getting some data to Ann about which existing DSL entries were not present in the dataset that had been newly extracted from the server.  This appears to have been caused by some entries being merged with existing entries.  I also managed to get the new dataset uploaded to our temporary web-server and created a new API that outputs this new data.  I still need to create an alternative version of the DSL front-end that connects to this new version of the data, which I hope to be able to at least get started on next week.  I also did some investigation into scripts that Thomas Widmann had discussed in some hand-over documentation that did not seem to be available anywhere and discussed some issues relating to the server the DSL people host in their offices.

I also spent some time working on HT duties, making some tweaks to existing scripts based on feedback from Fraser, investigating why one of our categories is not accessible via the website (the answer being it was a subcategory that didn’t have a main category in the same part of speech so had no category to ‘hang’ off).  I also had a further meeting with Marc and Fraser on Friday to discuss our progress with the HT  OED linking.