The project provides a richly-illustrated Catalogue of all known architectural projects by Charles Rennie Mackintosh, including over 1200 drawings by Mackintosh and the practice, analytical and contextual essays, a timeline and glossary. Find out more
As told by some of Scotland's best writers, and illustrated with thousands of images from the collections of the city's world-famous libraries, museums and universities. From football to fashions, Auchenshuggle to Yoker, you'll find it all here. Find out more
The resource provides ultrasound tongue imaging (UTI) and lip video of speech, magnetic resonance imaging (MRI) video of speech, and 2D midsagittal head animations based on MRI and UTI data. Find out more
A database of all known people of Scotland between 1093 and 1314 mentioned in over 8600 contemporary documents. It is also being extended to 1371 to include all those lands, peoples and relationships mentioned in royal charters between 1314 and 1371. Find out more
The project explores Romantic-period accounts of journeys into Wales and Scotland with a focus on the writings of the Flintshire naturalist and antiquarian Thomas Pennant (1726-1798), whose published Tours of both countries did so much to awaken public interest in the ‘peripheries’ of Britain. Find out more
The Scots Syntax Atlas presents the results of over 100,000+ acceptability judgments from over 500 speakers on over 250 morphosyntactic phenomena. The Atlas also contains a text-to-sound aligned corpus of spoken data totalling 275 hours and over 3 million words. Find out more
Bess of Hardwick's Letters brings together, for the first time, the remarkable letters written to and from Bess of Hardwick (c.1521/2 or 1527-1608), one of Elizabethan England's most famous figures. Find out more
The resource includes historical research for all Berwickshire place-names on the Ordnance Survey 1:50,000 Landranger map, including more than 1,600 place-names and 7,000 historical forms presented via a series of interactive maps. Find out more
James McNeill Whistler (1834-1903) was a major figure in 19th century printmaking and created 490 etchings. Over 9500 impressions of these prints have been located and investigated during the project, which completes a series of catalogues raisonnés of Whistler's oeuvre. Find out more
The Metaphor Map of English shows the metaphorical links which have been identified between different areas of meaning. These links can be from the Anglo-Saxon period right up to the present day so the map covers 1300 years of the English language. Find out more

This was a short week as I headed off on holiday on Thursday.  I’ll be off for the next two and a bit weeks.  I spent about two of my three days of work working on the SCOSYA project, implementing the new ‘group statistics’ feature that I’d written a mini-requirements document for last week.  This new feature will allow users to create groups of locations by clicking on them, to then save multiple groups, have facilities to edit and delete groups, and to be able to open up a pop-up to view statistics about the group.  I think it will be a really useful feature.  It has, however, been somewhat tricky to implement.  The Leaflet mapping library doesn’t make it easy (currently at least) to work programmatically with map markers.  It’s not possible to assign a marker an ID, or to iterate through all markers until you find the one you’re looking for.  It’s also very tricky to update the look of a marker after it has been added to the map.  Also, rather annoyingly, the latitude and longitude or particular markers doesn’t exactly match up with the values I store in the database for my map locations, which is slightly odd, and contributes to the difficulty of matching up my data and particular markers on the map.

However, I did manage to make some progress this week.  I created a new section in my ‘Display Options’ menu for group statistics and created a section in this for creating a new group.  With this option active, the default map behaviour when a marker is clicked on changes:  rather than opening a pop-up the script manages to grab some details relating to the map (such as the ‘display name’ from the pop-up) and to store these in an array.  Clicking a second time removes the details from the array.  I also figured out a way of updating the CSS class of a marker when it is clicked on.  This is actually not very easy to do in Leaflet.  Markers have access to a ‘setClass’ function which should allow you to add a custom class to a marker, but in actual fact this function is only available before a marker is added to the map – for existing markers using this function does nothing.  This seems really weird to me.  However, by using jQuery I was able to get around this limitation.  Within my ‘onClick’ function that gets called when the user clicks a marker, and assuming the marker variable has the name ‘loc’ I can update the class as follows:

If my ‘markerSelect’ class has styles to add a border round a marker I then have a highlighted marker.  A second click to deselect the marker calls the same code but without ‘markerSelect’ included.  This works pretty well.

With this in place I then created an AJAX script that the JavaScript posts data to when the user presses the ‘save’ button.  This takes the group name the user has entered and the array of locations and adds these to the database.

I then created another AJAX script that outputs a list of the user’s groups and added these underneath the ‘new’ section.  You ca see how this works in the following screenshot. 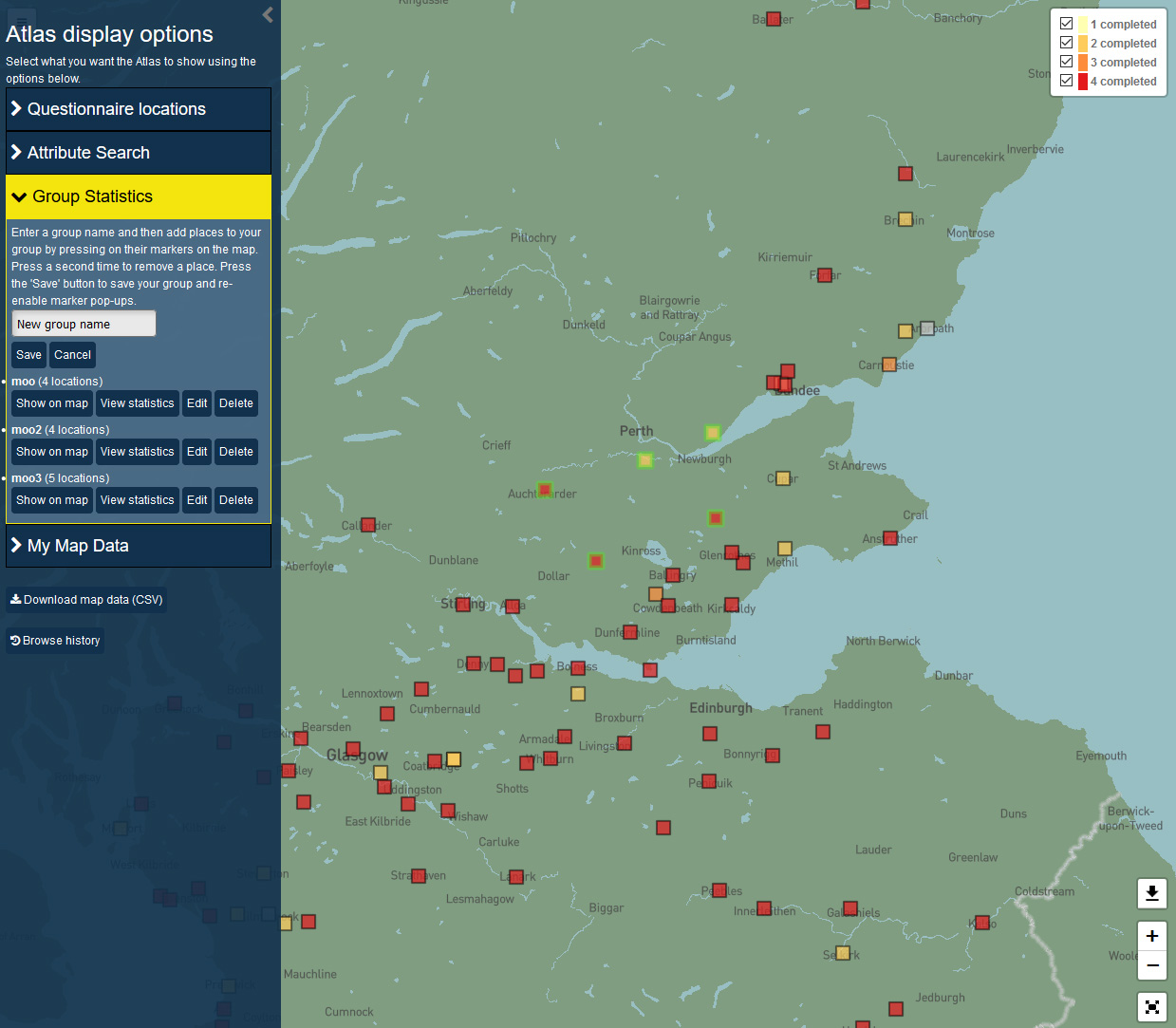 Unfortunately this is all I had time to implement this week.  I would have liked to have made more progress with the feature, but I just ran out of time.

Also this week I met with David Wilson, a developer working elsewhere in the College of Arts, to discuss approaches to creating project websites and database.  I made a few further tweaks to the HT category select feature too.  When creating the screenshot last week I noticed that the ‘recommended’ section was displaying information about each word’s categories that should really only have appeared in the timeline pop-up.  I fixed this.  I also updated the main timeline visualisation so that all results appear on it rather than just those for the current page of results.  I think this works a lot better and is a lot less confusing.  Fraser also wanted to update the visualisation so that words were clickable and led through to the appropriate category page.  I looked into this but I’m afraid this is going to be more complicated than you might think.

The timeline library strips out all HTML from the labels.  I tried tinkering with the library to ensure it can process HTML in the label, but I pull in the labels as JSON data and Javascript’s JSON.parse function can’t handle HTML in the data it’s parsing.  I tried passing escaped HTML (e.g. ‘&lt;’ instead of ‘<’) and then converting it back after the JSON was parsed, and this does get the tags through to the visualisation, but unfortunately as the visualisation is an SVG and not HTML it doesn’t know what to do with HTML tags.  I checked my Mapping Metaphor visualisations to see how I handled links in labels here, and what I did was use classes and IDs in order to process clicks in JavaScript rather than just using simple HTML links.  I can do this with the timeline, but I don’t have time to do it before I go on holiday.  I’ll see what I can do about it once I’m back.