The project provides a richly-illustrated Catalogue of all known architectural projects by Charles Rennie Mackintosh, including over 1200 drawings by Mackintosh and the practice, analytical and contextual essays, a timeline and glossary. Find out more
The Scottish Corpora project has created large electronic corpora of written and spoken texts for the languages of Scotland, featuring nearly 4.6 million words of text, with audio recordings to accompany many of the spoken texts. Find out more
Bess of Hardwick's Letters brings together, for the first time, the remarkable letters written to and from Bess of Hardwick (c.1521/2 or 1527-1608), one of Elizabethan England's most famous figures. Find out more
The Digital Catalogue documents, visually and textually, the first ten years of Andy Goldsworthy's ephemeral, outdoor practice. It replicates Goldsworthy's Slide Cabinet Index, and includes previously unpublished material from Goldsworthy's Sketchbook Diaries. Find out more
As told by some of Scotland's best writers, and illustrated with thousands of images from the collections of the city's world-famous libraries, museums and universities. From football to fashions, Auchenshuggle to Yoker, you'll find it all here. Find out more
The resource includes historical research for all Berwickshire place-names on the Ordnance Survey 1:50,000 Landranger map, including more than 1,600 place-names and 7,000 historical forms presented via a series of interactive maps. Find out more
The Metaphor Map of English shows the metaphorical links which have been identified between different areas of meaning. These links can be from the Anglo-Saxon period right up to the present day so the map covers 1300 years of the English language. Find out more
A database of all known people of Scotland between 1093 and 1314 mentioned in over 8600 contemporary documents. It is also being extended to 1371 to include all those lands, peoples and relationships mentioned in royal charters between 1314 and 1371. Find out more
A publicly accessible, online scholarly edition of one of the most important archives of eighteenth-century medical "consultation letters", containing more than 20,000 digitised pages. Find out more
The online catalogue includes some 550 oil paintings and over 1700 works on paper dating from ca 1850 to 1903. The evolution of each painting from sketch to final oil is described and illustrated. Find out more

This was a short week for me as I only worked from Monday to Wednesday due to Christmas coming along.  I spent most of Monday and Tuesday continuing to work on the Technical Plan for Joanna Kopaczyk’s proposal.  As it’s a project with quite a large technical component there was a lot to think about and lots of detail to try and squeeze into the maximum of four pages allowed for a Plan.  My first draft was five pages long, so I had to chop some information out and reformat things to try and bring the length down a bit, but thankfully I managed to get it within the limit whilst still making sense and retaining the important points.  I also chatted with Graeme some more about some of the XML aspects of the project and had an email conversation with Luca about it too.  It was good to get the Plan sent on to Joanna, although it’s still very much a first draft that will need some further tweaking as other aspects of the proposal are firmed up.

I had to fix an issue with the Thesaurus of Old English staff pages on Monday.  The ‘edit lexemes’ form was set to not allow words to be more than 21 characters long.  Jane Roberts had been trying to update the positioning of the word ‘(ge)mearcian mid . . . rōde’, and as  this is more than 21 characters any changes made to this row were being rejected.  I’m not sure why I’d set the maximum word length to 21 as the database allows up to 60 characters in this field.  But I updated the check to allow up to 60 characters and that fixed the problem.  I also spent a bit of time on Tuesday gathering some stats for Wendy about the various Mapping Metaphor resources (i.e. the main website, the blog, the iOS app and the Android app).  I also had a chat with Jane Stuart Smith about an older but still very important site that she would like me to redesign at some point next year, and I started looking through this and thinking how it could be improved.

On Wednesday, as it was my last day before the hols, I decided to focus on something from my ‘to do’ list that would be fun.  I’d been wanting to make a timeline for the Historical Thesaurus for a while so I thought I’d look into that.  What I’ve created so far is a page through which you can pass a category ID and then see all of the words in the category in a visualisation that shows when the word was used, based on the ‘apps’ and ‘appe’ fields in the database.  When a word’s ‘apps’ and ‘appe’ fields are the same it appears as a dot in the timeline, and where the fields are different the word appears as a coloured bar showing the extent of the attested usage.  Note that more complicated date structures such as ‘a1700 + 1850–‘ are not visualised yet, but could be incorporated (e.g. a dot for 1700 then a bar from 1850 to 2000).

When you hover over a dot or bar the word and its dates appear below the visualisation.  Eventually (if we’re going to use this anywhere) I would instead have this as a tool-tip pop-up sort of thing.

Here are a couple of screenshots of fitting examples for the festive season.  First up is words for ‘Be gluttonous’: 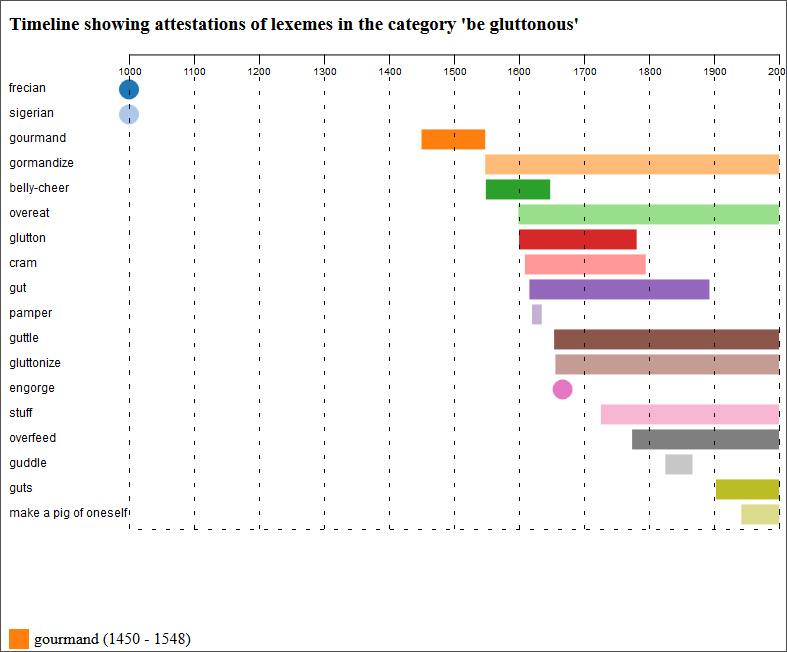 And here are words for ‘Excess in drinking’: 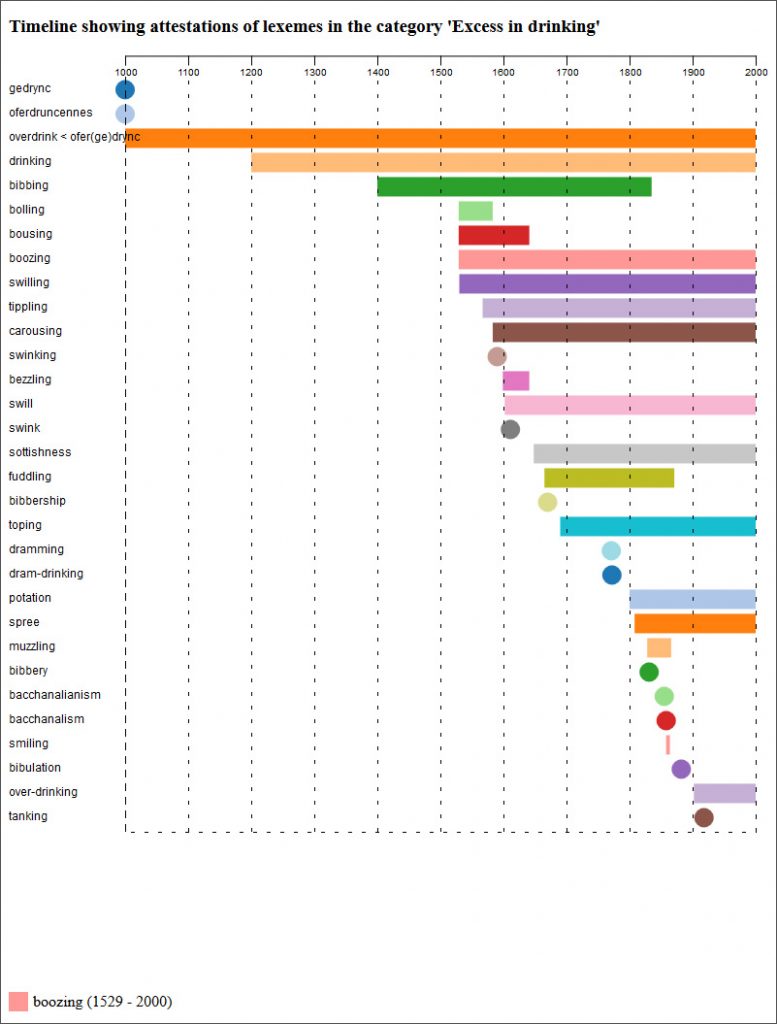 The next step with this would be to incorporate all subcategories for a category, with different shaded backgrounds for sections for each subcategory and a subcategory heading added in.  I’m not entirely sure where we’d link to this, though.  We could allow people to view the timeline by clicking on a button in the category browse page.  Or we might not want to incorporate it at all, as it might just clutter things up.  BTW, this is a D3 based visualisation created by adapting this code: https://github.com/denisemauldin/d3-timeline

That’s all from me for 2017.  Best wishes for Christmas and the New Year to one and all!