A publicly accessible, online scholarly edition of one of the most important archives of eighteenth-century medical "consultation letters", containing more than 20,000 digitised pages. Find out more
As told by some of Scotland's best writers, and illustrated with thousands of images from the collections of the city's world-famous libraries, museums and universities. From football to fashions, Auchenshuggle to Yoker, you'll find it all here. Find out more
The online catalogue includes some 550 oil paintings and over 1700 works on paper dating from ca 1850 to 1903. The evolution of each painting from sketch to final oil is described and illustrated. Find out more
A database of all known people of Scotland between 1093 and 1314 mentioned in over 8600 contemporary documents. It is also being extended to 1371 to include all those lands, peoples and relationships mentioned in royal charters between 1314 and 1371. Find out more
The Digital Catalogue documents, visually and textually, the first ten years of Andy Goldsworthy's ephemeral, outdoor practice. It replicates Goldsworthy's Slide Cabinet Index, and includes previously unpublished material from Goldsworthy's Sketchbook Diaries. Find out more
The Metaphor Map of English shows the metaphorical links which have been identified between different areas of meaning. These links can be from the Anglo-Saxon period right up to the present day so the map covers 1300 years of the English language. Find out more
James McNeill Whistler (1834-1903) was a major figure in 19th century printmaking and created 490 etchings. Over 9500 impressions of these prints have been located and investigated during the project, which completes a series of catalogues raisonnés of Whistler's oeuvre. Find out more
The project explores Romantic-period accounts of journeys into Wales and Scotland with a focus on the writings of the Flintshire naturalist and antiquarian Thomas Pennant (1726-1798), whose published Tours of both countries did so much to awaken public interest in the ‘peripheries’ of Britain. Find out more
The resource includes historical research for all Berwickshire place-names on the Ordnance Survey 1:50,000 Landranger map, including more than 1,600 place-names and 7,000 historical forms presented via a series of interactive maps. Find out more
The project provides a richly-illustrated Catalogue of all known architectural projects by Charles Rennie Mackintosh, including over 1200 drawings by Mackintosh and the practice, analytical and contextual essays, a timeline and glossary. Find out more

I returned to work after the Christmas holidays on Thursday this week, and spent the day dealing with a few issues that had cropped up whilst I’d been away.  The DSL Advanced Search had stopped working on Wednesday this week.  I remembered that this had happened a few years ago and was caused by an issue with the Apache Solr search engine, which the advanced search uses.  Previously restarting the server had sorted the issue but this didn’t work this time.  Thankfully after speaking to Chris about this we realised that Solr runs on an Apache Tomcat server rather than the main Apache server software, and this had been updated the day before.  It would appear that the update had stopped Solr working, but restarting Tomcat got things working again.  I also made a minor tweak to the Scots Corpus for Wendy.

After that, and dealing with a few emails, I returned to the Historical Thesaurus timeline visualisations I’d created the day before the Christmas holidays.  I’d emailed Marc and Fraser about these before the holidays and they’d got back to me with some encouraging comments.  The initial visualisations I’d made only worked with the approximate start and end dates from the Thesaurus database – the ‘apps’ and ‘appe’ dates that give a single start and end date for each word.  However, the actual dates for lexemes are considerably more complicated than this.  In fact there are 18 fields relating to dates in the underlying database that allow different ranges of dates to be recorded, for example ‘OE + a1400/50–c1475 + a1746– now History’.  Writing an algorithm that could process every different possible permutation of the date fields proved to be rather tricky and took quite a bit of time to get my head around.  I managed to get an algorithm working by mid-morning on the Friday, and although this still needs quite a bit of detailed testing it does at least seem to work (and does work with the above example), giving a nice series of dots and dashes along a timeline.

Marc, Fraser and I met on Friday to discuss the timeline and how we might improve on it and integrate it into the site.  Our meeting lasted almost three hours and was very useful.  It looks like the feature I created just because I had some free time and I had wanted to experiment is going to be fully integrated with many aspects of the site.  The only downside is there is now a massive amount of additional functionality we want to implement, and I know I’m going to be pretty busy with other projects once the new year properly gets under way, so it might take quite a while to get all this up and running.  Still, it’s exciting, though.  Also whilst working through my algorithm I’d spotted some occurrences where the dates were wrong, in that they had a range of dates where a range did not make sense, e.g. ‘OE–c1200–a1500’.  I generated a few CSV files with such rows (there are a couple of hundred) and Marc and Fraser are going to try and sort them out.  After our lengthy meeting I started to add in pop-ups to the timeline, so that when you click on an item a pop-up opens displaying information about the word (e.g. the word and its full date text).  I still need to do some work on this, but it’s good to get the basics in place.  Here’s a screenshot showing the timeline using the full date fields and with a pop-up open: 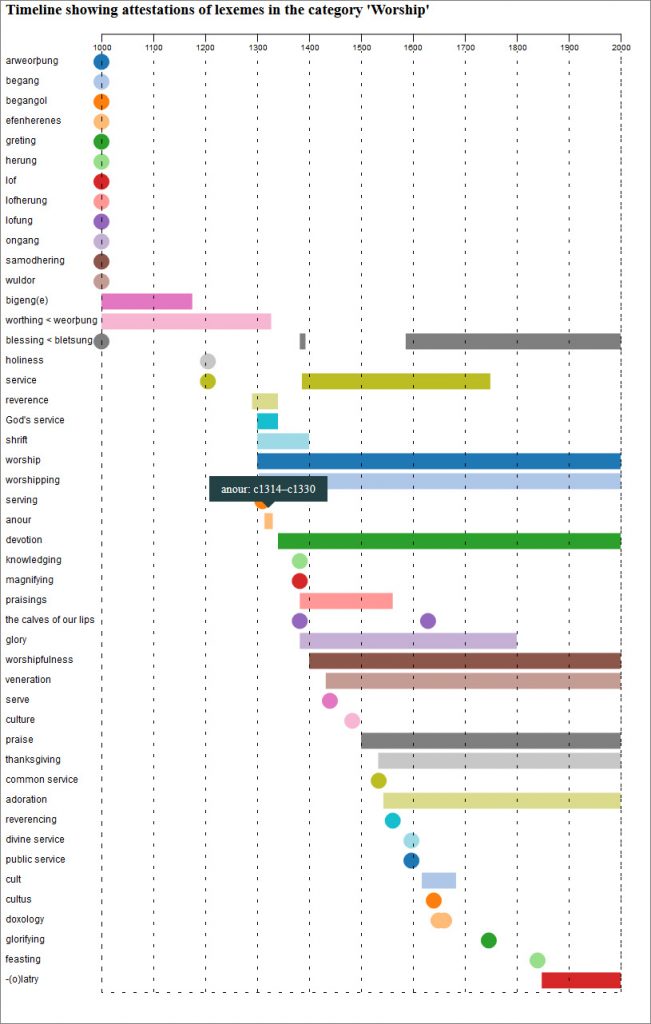