The Scottish Corpora project has created large electronic corpora of written and spoken texts for the languages of Scotland, featuring nearly 4.6 million words of text, with audio recordings to accompany many of the spoken texts. Find out more
The Scots Syntax Atlas presents the results of over 100,000+ acceptability judgments from over 500 speakers on over 250 morphosyntactic phenomena. The Atlas also contains a text-to-sound aligned corpus of spoken data totalling 275 hours and over 3 million words. Find out more
James McNeill Whistler (1834-1903) was a major figure in 19th century printmaking and created 490 etchings. Over 9500 impressions of these prints have been located and investigated during the project, which completes a series of catalogues raisonnés of Whistler's oeuvre. Find out more
The online catalogue includes some 550 oil paintings and over 1700 works on paper dating from ca 1850 to 1903. The evolution of each painting from sketch to final oil is described and illustrated. Find out more
A database of all known people of Scotland between 1093 and 1314 mentioned in over 8600 contemporary documents. It is also being extended to 1371 to include all those lands, peoples and relationships mentioned in royal charters between 1314 and 1371. Find out more
The University of Glasgow’s Historical Thesaurus of English is a unique resource charting the development of meaning in the huge and varied vocabulary of English. It consists of almost every recorded word in English from Anglo-Saxon times to the present day, all arranged into detailed hierarchies of meaning. Find out more
The Metaphor Map of English shows the metaphorical links which have been identified between different areas of meaning. These links can be from the Anglo-Saxon period right up to the present day so the map covers 1300 years of the English language. Find out more
A publicly accessible, online scholarly edition of one of the most important archives of eighteenth-century medical "consultation letters", containing more than 20,000 digitised pages. Find out more
The resource includes historical research for all Berwickshire place-names on the Ordnance Survey 1:50,000 Landranger map, including more than 1,600 place-names and 7,000 historical forms presented via a series of interactive maps. Find out more
The project provides a richly-illustrated Catalogue of all known architectural projects by Charles Rennie Mackintosh, including over 1200 drawings by Mackintosh and the practice, analytical and contextual essays, a timeline and glossary. Find out more

At the start of the week I had to spend a little time investigating some issues with a couple of my WordPress sites, which were failing to connect to external services such as the Akismet anti-spam service.  It turned out that there had been a hardware failure on one of the servers which had affected outgoing connections. With the help of Chris I managed to get this sorted again and also took the opportunity to upgrade all of the WordPress instances I manage to the latest incremental version.  Some further maintenance issues were encountered later in the week when Chris informed me that one of our old sites (the Old English Teaching site that was set up long before I started working in my current role) had some security issues, so I fixed these as soon as I could.

I spent about two days this week working on the New Modernist Editing project for Bryony Randall.  I’m creating a digital edition of a short story by Virginia Woolf that will include a facsimile view and a transcription view, with the transcription view offering several ways to view the text by turning on or off various features of the text.  One possibility I investigated was using the digital edition system that has been developed for the Digital Vercelli Book (see http://vbd.humnet.unipi.it/beta2/#).  This is a really lovely interface for displaying facsimiles and TEI texts and the tool is available to download and reuse.  However, it offers lots of functionality that we don’t really need and it doesn’t provide the facility to tailor the transcription view based on the selection or individual features.  While it would be possible to add this feature in, I decided that it would be simpler if I just made a simple system from scratch myself.

I used OpenLayers (http://openlayers.org/) to create a zoomable interface for the facsimile view and a few lines of jQuery handled the navigation, the display of a list of thumbnails and things like that.  I also added in a section for displaying the transcription and facilities to turn the facsimile and transcription view on or off.  I’m pretty happy with how things are progressing.  Here’s a screenshot of the facsimile view as it currently stands: 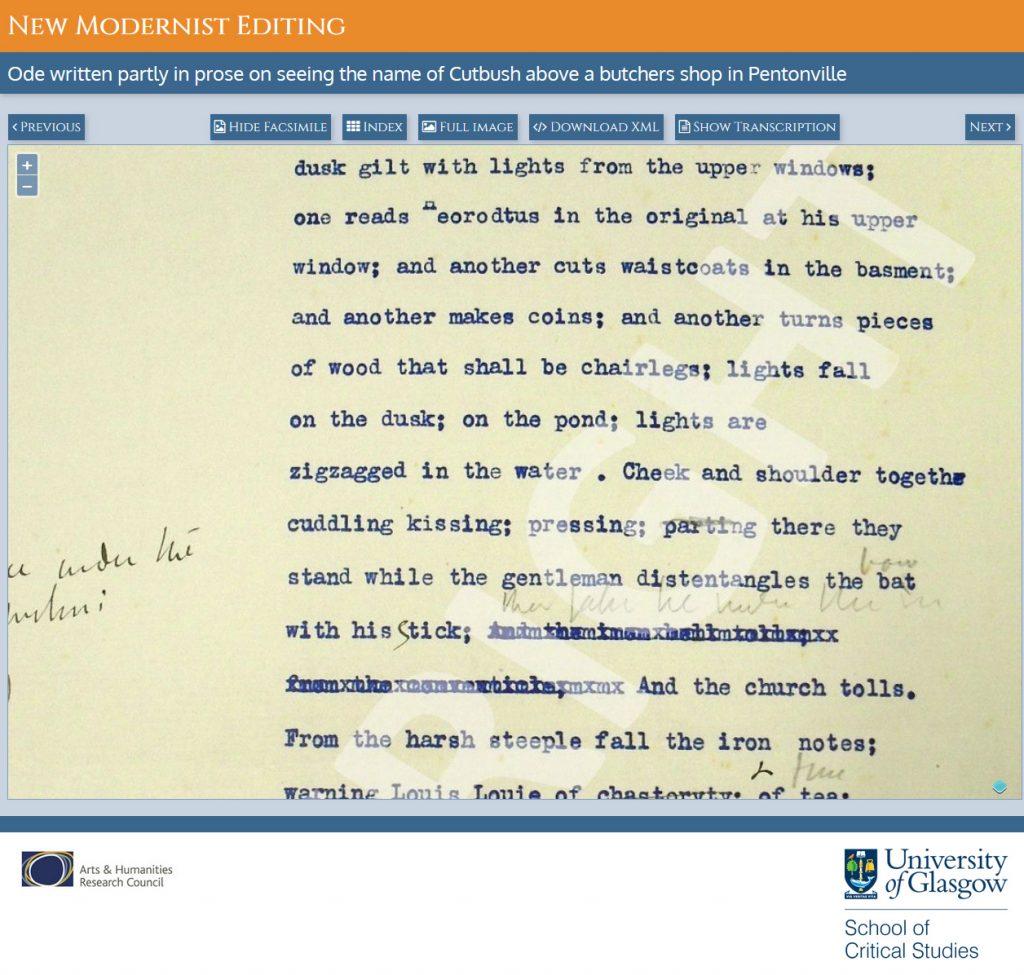 I also worked on the transcription itself, completing an initial transcription of the six manuscript pages as TEI XML.  This included marking deleted text, notes, illegible text, gaps in the text and things like that.  It’s only a first attempt and I still might change how certain aspects are marked up, but it’s good to have something to work with now.

I uploaded this week’s new Burns song of the week (See http://burnsc21.glasgow.ac.uk/lassie-wi-the-lintwhite-locks/) and corresponded with Kirsteen about a new web resource she requires, with Craig regarding his Burns bibliography database and with Ronnie about his Burns paper database.  I also spent a few hours on further AHRC review duties and had a meeting with Marc and Fraser about future Historical Thesaurus plans and the Linguistic DNA project.  I’m going to be producing some new visualisations of the thesaurus data to show the change in language over time.  I can’t really say more about them at this stage, but I’ll start investigating the possibilities next week.

For the remainder of the week I continued to work on the ‘upload my data’ facilities for the SCOSYA project.  Last week I completed the options for uploading data files and this week I set to work on actually allowing these files to be visualised through the atlas.  It’s proving to be a tricky process to get sorted and thus far I haven’t managed to visualise anything other than a JavaScript error.  The problem is I can’t just take the ratings and data points and display them – instead I need to display them in a way that matches the selection options that the user chose when they downloaded the file – for example the Boolean operators used to join the attributes.  I’m definitely making progress with this, but it’s pretty far from being finished as of yet.  I’ll continue with this next week, though.