The Scottish Corpora project has created large electronic corpora of written and spoken texts for the languages of Scotland, featuring nearly 4.6 million words of text, with audio recordings to accompany many of the spoken texts. Find out more
The Scots Syntax Atlas presents the results of over 100,000+ acceptability judgments from over 500 speakers on over 250 morphosyntactic phenomena. The Atlas also contains a text-to-sound aligned corpus of spoken data totalling 275 hours and over 3 million words. Find out more
The resource provides ultrasound tongue imaging (UTI) and lip video of speech, magnetic resonance imaging (MRI) video of speech, and 2D midsagittal head animations based on MRI and UTI data. Find out more
The Metaphor Map of English shows the metaphorical links which have been identified between different areas of meaning. These links can be from the Anglo-Saxon period right up to the present day so the map covers 1300 years of the English language. Find out more
The Digital Catalogue documents, visually and textually, the first ten years of Andy Goldsworthy's ephemeral, outdoor practice. It replicates Goldsworthy's Slide Cabinet Index, and includes previously unpublished material from Goldsworthy's Sketchbook Diaries. Find out more
Bess of Hardwick's Letters brings together, for the first time, the remarkable letters written to and from Bess of Hardwick (c.1521/2 or 1527-1608), one of Elizabethan England's most famous figures. Find out more
The University of Glasgow’s Historical Thesaurus of English is a unique resource charting the development of meaning in the huge and varied vocabulary of English. It consists of almost every recorded word in English from Anglo-Saxon times to the present day, all arranged into detailed hierarchies of meaning. Find out more
A publicly accessible, online scholarly edition of one of the most important archives of eighteenth-century medical "consultation letters", containing more than 20,000 digitised pages. Find out more
A database of all known people of Scotland between 1093 and 1314 mentioned in over 8600 contemporary documents. It is also being extended to 1371 to include all those lands, peoples and relationships mentioned in royal charters between 1314 and 1371. Find out more
James McNeill Whistler (1834-1903) was a major figure in 19th century printmaking and created 490 etchings. Over 9500 impressions of these prints have been located and investigated during the project, which completes a series of catalogues raisonnés of Whistler's oeuvre. Find out more

With the launch of the Mapping Metaphor project creeping ever closer I spent the bulk of this week going through my list of bugs and fixing them. I’m happy to report that I have now ticked off every item from my list, plus I’ve fixed a handful of other bugs that I’ve come across too. As with last week, the bugs are a mixed bag of relatively trivial blighters and some rather more tricky beasts.

First of all some updates to the way category info buttons work. These buttons bring up the descriptors for the category when clicked on, but when viewing a level 3 category these buttons were not being displayed unless the category in question was clicked on in the visualization. They are now available when no category is selected by default, whether the category in question is selected or not. These info buttons also now work in the tabular and card (‘cardular’?) views when the user clicks on any of the listed categories too. Category info pop-up titles now say ‘Category Descriptors’ where previously they either said nothing or ‘Metaphor’.

As the number of metaphors that were first recorded in Old English are generally more numerous than those first recorded in other time periods this was unbalancing the timeline view. Marc and Ellen wanted the Old English column to be wider than the others and to have multiple connections listed per row. Implementing this has proved to be very tricky. I’m afraid I couldn’t find a way to make one column of the graph wider than the rest as the columns are generated programmatically by the d3 library. It would mean hacking about with the source code for the library and I didn’t think that was such a good idea. However, as the columns are pretty wide as they are what I’ve managed to do is squeeze three dots per row into the Old English column, much in the same way as the ‘top level’ timeline has five squares per row. I think this works pretty well at evening out the size of the OE column. I’ve also added a tooltip and an asterisk to the ‘Old English’ column label. Hover over the label to view information about what we mean by OE.

I’ve updated the key in a couple of ways. In the top level timeline the key now displays squares rather than circles. And on all pages I’ve updated they so that it keeps it position at the bottom of the browser when the page is scrolled. It’s still possible to move the key somewhere else too and wherever you leave it, it will also remain fixed and visible when the page scrolls. I think this works a lot better than having it scroll off the page when the user scrolls, but there is a slight downside: Adding this feature is using up more of the browser’s memory and it can slow down the operation of the visualisation in some browsers, especially on older hardware. On my work PC in Firefox with the key visible scrolling the browser on the visualisation page is slightly ‘laggy’ and the visualisation rotation is a bit jerky when it contains a lot of data. For some reason my PC has no such problems when using Chrome or IE though. I think stopping the key scrolling off the screen is much better but the increased jerkiness might be a big issue.

I’ve updated the search page to split it into two tabs, one for ‘quick’, the other for ‘advanced’. The ‘advanced’ tab loads by default if the user navigates to the search page from a ‘refine results’ link or when selecting to clear the search boxes. In the ‘browse’ page I’ve fixed the CSS to ensure that moving the mouse over a level 2 heading the text goes white and is easier to view. I’ve also made it so that the ‘plus’ icon turns white as well instead of staying grey. Links in general have now been given a colour rather than being the browser default. They are now green by default and magenta when hovered over. Updating this led to a lot of unwanted messing up of other buttons and links in the site so it took quite a while to track all of these down and fix them.

There were some issues with the timeline SVG download files. They were getting cut off when downloaded because the height and width properties were not being properly set. This has been fixed now. SVG downloads of the timeline now appear in full colour in Inkscape rather than just monochrome. There were some stylesheet errors that stopped the colours working, although IE managed to cope with the errors just fine. All validates now (except for elements having titles when they’re not allowed them in the SVG standard, but we need titles in order to get the hover-over tooltips

I’ve also fixed the top-level timeline metaphor card heading, which was displaying ‘-2’. It now displays ‘Metaphor Connections’ as a title.

I also realised this week that the quick search facility for searching historical thesaurus words had broken. It was never returning any results. This happened due to a change I made to the HT database a few weeks ago – Marc wanted to ‘MMCat’ column moved out of the HT category table and put in its own linking table instead. I thought I’d found all the places in the MM site where this update required sorting but missed the HT search. It’s working now.

Category names in the metaphor cards are now clickable and as requested by Ellen and the team, I’ve removed the buttons that lead to views showing all other categories linked to the two in the card. It’s a bit of a shame to lose these views but the options were a potential source of confusion for users.

Finally, I created a ‘favicon’ for the site this week that appears in the browser tabs. It’s a simple green circle like the visualisation with a yellow ‘M’ in it. The yellow is the same as that used when metaphor connection lines are highlighted in the visualisation and the idea was to make the ‘M’ look like lines connecting up different parts of the circle.

So that’s everything ticked off my list. I still need to implement some sort of breadcrumb or history feature, which I’ll take a look at next week, but other than that everything has really come together rather well.

I did a few non-metaphor related jobs this week, including giving some advice to Johanna Green about a project she’s putting together involving Special Collections, communicating a little with Jane Stuart-Smith about the bid she’s working on and doing some AHRC related duties. I also had a very brief meeting with Susan Rennie about her Scots Thesaurus project. At this meeting Susan gave me an old CR-ROM version of Johnson’s dictionary. It was made in the early 90s and won’t work on modern computers and Susan wondered what could be done to access the content. The software it uses is something called ‘DynaText’, which is proprietary software made by a company that went out of business in 2002. As far as I can tell, it’s not possible to extract the underlying SGML files from the CD-ROM as they seem to be stored in a proprietary, binary format rather than plain text. This means it’s probably not going to be possible to do anything with the data other than get access to it through the old interface. To repurpose the data you’d have to get the source files from whoever produced the CD-ROM.

I tried to get the ‘install’ command to work on my Windows 7 PC using the available compatibility options by right clicking on the ‘install.exe’ filename then selecting ‘properties’ then choosing the ‘Compatibility’ tab and selecting the mode. But even with the mode set to Windows 95 the installer just gave an error.

I then looked into using a virtual machine. This is a piece of software that emulates a computer, through which you can install older operating systems and access them through a window on your PC. I followed the instructions here: http://www.makeuseof.com/tag/forget-end-life-woes-windows-8-xp-mode/ and managed to get a Windows XP operating system running using the ‘VirtualBox’ software. Through this I managed to run the CD-ROM installer and get access to the dictionary as you can see below: 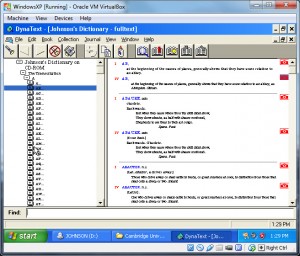 I’ve taken Monday off next week so I’ll be back in the office on Tuesday.