The online catalogue includes some 550 oil paintings and over 1700 works on paper dating from ca 1850 to 1903. The evolution of each painting from sketch to final oil is described and illustrated. Find out more
The University of Glasgow’s Historical Thesaurus of English is a unique resource charting the development of meaning in the huge and varied vocabulary of English. It consists of almost every recorded word in English from Anglo-Saxon times to the present day, all arranged into detailed hierarchies of meaning. Find out more
James McNeill Whistler (1834-1903) was a major figure in 19th century printmaking and created 490 etchings. Over 9500 impressions of these prints have been located and investigated during the project, which completes a series of catalogues raisonnés of Whistler's oeuvre. Find out more
The Metaphor Map of English shows the metaphorical links which have been identified between different areas of meaning. These links can be from the Anglo-Saxon period right up to the present day so the map covers 1300 years of the English language. Find out more
The Scots Syntax Atlas presents the results of over 100,000+ acceptability judgments from over 500 speakers on over 250 morphosyntactic phenomena. The Atlas also contains a text-to-sound aligned corpus of spoken data totalling 275 hours and over 3 million words. Find out more
A publicly accessible, online scholarly edition of one of the most important archives of eighteenth-century medical "consultation letters", containing more than 20,000 digitised pages. Find out more
The project explores Romantic-period accounts of journeys into Wales and Scotland with a focus on the writings of the Flintshire naturalist and antiquarian Thomas Pennant (1726-1798), whose published Tours of both countries did so much to awaken public interest in the ‘peripheries’ of Britain. Find out more
The resource includes historical research for all Berwickshire place-names on the Ordnance Survey 1:50,000 Landranger map, including more than 1,600 place-names and 7,000 historical forms presented via a series of interactive maps. Find out more
The project provides a richly-illustrated Catalogue of all known architectural projects by Charles Rennie Mackintosh, including over 1200 drawings by Mackintosh and the practice, analytical and contextual essays, a timeline and glossary. Find out more
A database of all known people of Scotland between 1093 and 1314 mentioned in over 8600 contemporary documents. It is also being extended to 1371 to include all those lands, peoples and relationships mentioned in royal charters between 1314 and 1371. Find out more
project

The Linguistic DNA of Modern Western Thought uses digital methods and resources to analyse more than 5 million pages of printed texts. This data represents works printed in English, or in England, Ireland, Scotland, and Wales from 1473 to 1800. 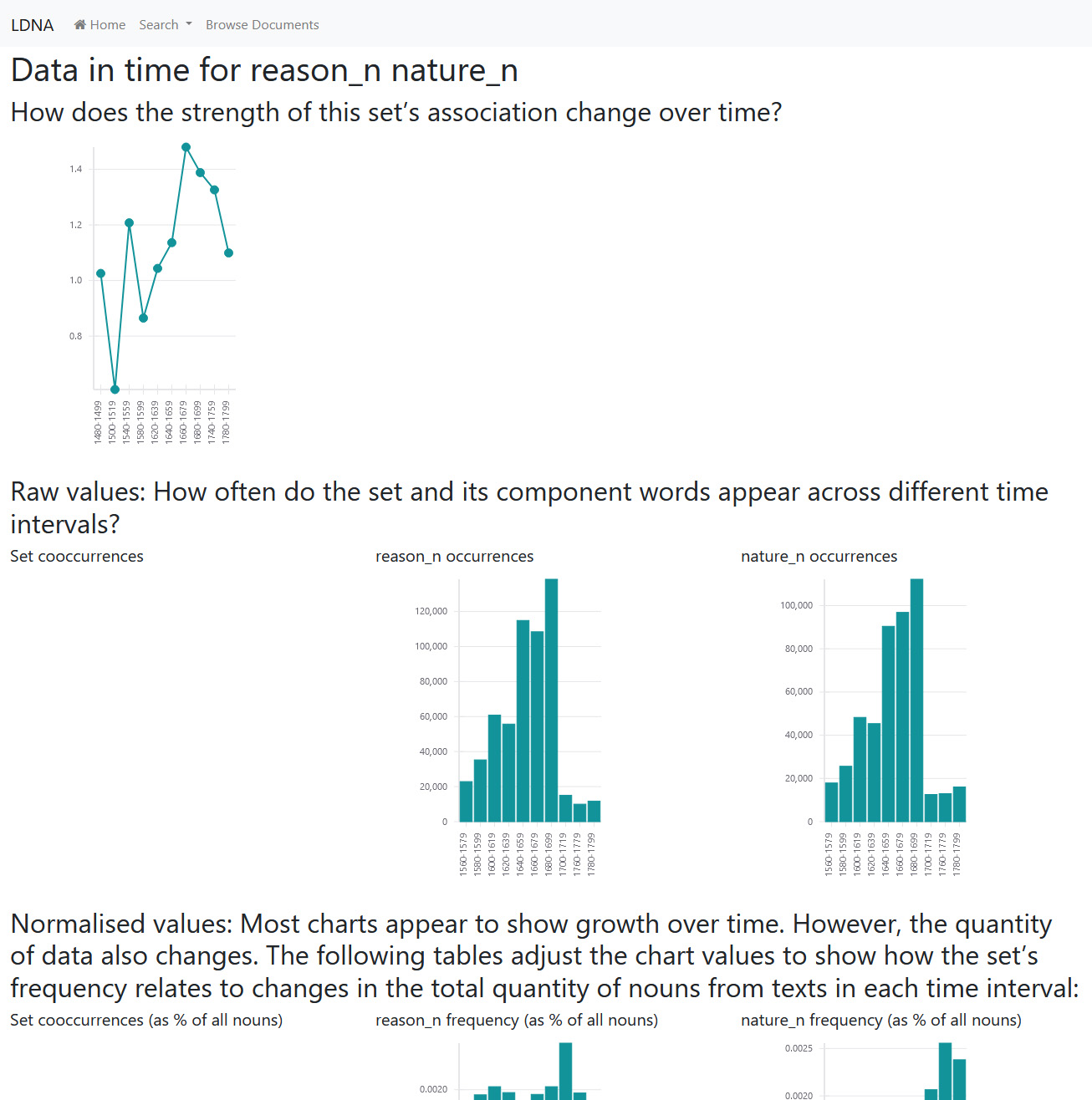 The association between Reason and Nature over time

For the early part of the period, we are working with the ca. 58,000 texts digitised as part of the Early English Books Online Text Creation Partnership collaboration (EEBO-TCP). From 1700, our major source is Gale Cengage’s Eighteenth Century Collections Online (ECCO). These resources allow an unprecedented level of comprehensiveness in the analysis of language, semantics, and conceptual history in the Early Modern period. The project applies computational tools to these resources to analyse details of Early Modern English vocabulary and semantics, including instances of social and cultural keywords and their shifting frequencies, meanings, and uses in various contexts over time. The result will be a rigorous, systematic, and scientific account of Early Modern conceptual history via its linguistic data.

In addition, the project also incorporates the recently completed Historical Thesaurus of English. The thesaurus serves as a taxonomy of language history as it is captured in the Oxford English Dictionary; it organises the 793,000 word senses in the OED and other sources into semantic categories, which can nest inside wider categories in a taxonomy up to twelve layers tall. As such, the architecture and database of the thesaurus are key to identifying concepts in the texts explored in this project.

Using the resources described above, it is possible to discern trends, relationships, and anomalies across an enormous amount of linguistic data to identify the often surprising complexities, continuities, and discontinuities inherent to linguistic and conceptual change.