The project provides a richly-illustrated Catalogue of all known architectural projects by Charles Rennie Mackintosh, including over 1200 drawings by Mackintosh and the practice, analytical and contextual essays, a timeline and glossary. Find out more
Bess of Hardwick's Letters brings together, for the first time, the remarkable letters written to and from Bess of Hardwick (c.1521/2 or 1527-1608), one of Elizabethan England's most famous figures. Find out more
The Scots Syntax Atlas presents the results of over 100,000+ acceptability judgments from over 500 speakers on over 250 morphosyntactic phenomena. The Atlas also contains a text-to-sound aligned corpus of spoken data totalling 275 hours and over 3 million words. Find out more
The online catalogue includes some 550 oil paintings and over 1700 works on paper dating from ca 1850 to 1903. The evolution of each painting from sketch to final oil is described and illustrated. Find out more
The resource includes historical research for all Berwickshire place-names on the Ordnance Survey 1:50,000 Landranger map, including more than 1,600 place-names and 7,000 historical forms presented via a series of interactive maps. Find out more
The Metaphor Map of English shows the metaphorical links which have been identified between different areas of meaning. These links can be from the Anglo-Saxon period right up to the present day so the map covers 1300 years of the English language. Find out more
A database of all known people of Scotland between 1093 and 1314 mentioned in over 8600 contemporary documents. It is also being extended to 1371 to include all those lands, peoples and relationships mentioned in royal charters between 1314 and 1371. Find out more
A publicly accessible, online scholarly edition of one of the most important archives of eighteenth-century medical "consultation letters", containing more than 20,000 digitised pages. Find out more
James McNeill Whistler (1834-1903) was a major figure in 19th century printmaking and created 490 etchings. Over 9500 impressions of these prints have been located and investigated during the project, which completes a series of catalogues raisonnés of Whistler's oeuvre. Find out more
The resource provides ultrasound tongue imaging (UTI) and lip video of speech, magnetic resonance imaging (MRI) video of speech, and 2D midsagittal head animations based on MRI and UTI data. Find out more

With work completed on the interactive map for the Regional Romanticism last week, I turned instead this week to some other outstanding items on my ‘to do’ list.  I spent quite a bit of time continuing to work on the new version of the Digital Humanities Network site, going through all of the existing projects and deciding which to keep.  I keep all projects that still have a functioning website that is in some way connected to digital humanities, and for each of these I then need to generate new icons, banner images and screenshots, associate developers and expand upon the available descriptive text.  So far I have set up enhanced records for 48 projects, meaning I’m over halfway to completion.  It is a time-consuming process but I believe it is worth it so we have a place to showcase these valuable assets.

I spent at least half the week working on the website for the Place-names of Mull and Ulva, a new project that has started up in Celtic and Gaelic for which I am adapting the place-names system I originally created for the Berwickshire Place-names project.  The project PI is Alasdair Whyte and I met with him on Thursday to discuss developments.  Before that I worked on the interface for the site, as Alasdair had sent me some images he wanted me to use and had decided which font he wanted the site to use.  I made a nice header image using a photograph of Mull that Alasdair sent, blended with an image of a historical map from NLS.  I also added the bottom part of the image to the footer, and added in the required logos and image credits.  I also got the multilingual side of things, which I’d started working on last week, working properly, added in the required fonts, changed the way the site menus were displayed and did some other tweaking and refinement of the original theme.  Below is an example of how things currently look: 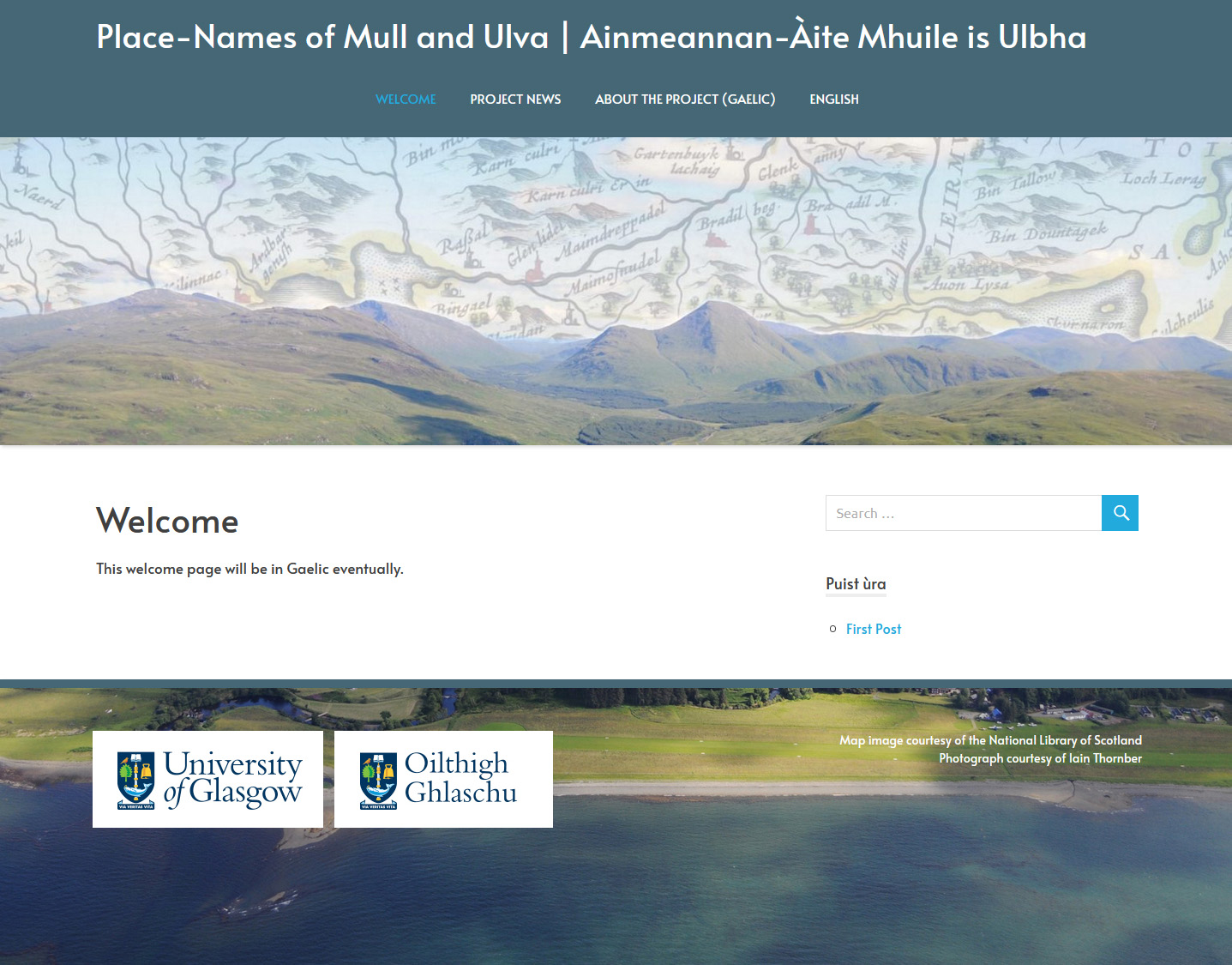 I also made some updates to the content management system for the site.  As of yet I haven’t added in full multilingual support, but I have added in the additional fields that Alasdair had requested.  This includes a new facility to upload captioned images that can be associated with a place-name record, a new dedicated field for ‘translation’ and another new field for specifying which island a place-name is on.  I also started to look into how a Lidar map layer might be added to the public maps interface, although this is going to need some further work.

Also this week I spoke to Craig Lamont about the Burns Scotland website, which needs some updating.  I looked over the site and gave him some ideas as to what could possibly be done with it.  I also helped out Rob Maslen with an issue relating to his ‘Fantasy’ blog.

On Friday afternoon I met with Matt Sangster and Katie Halsey to discuss their Books and Borrowers project.  This is a major AHRC project that I helped write the proposal for.  We heard before Christmas that the project has been funded, which is excellent news, so we met this week to discuss our next steps.  The project doesn’t actually start until June, but I’m going to try and get some of the technical aspects in place before then in order to allow the project’s RAs to get started straight away.  It’s all very exciting and hopefully it will be a great project to work on when the time comes.