The online catalogue includes some 550 oil paintings and over 1700 works on paper dating from ca 1850 to 1903. The evolution of each painting from sketch to final oil is described and illustrated. Find out more
The project provides a richly-illustrated Catalogue of all known architectural projects by Charles Rennie Mackintosh, including over 1200 drawings by Mackintosh and the practice, analytical and contextual essays, a timeline and glossary. Find out more
The resource provides ultrasound tongue imaging (UTI) and lip video of speech, magnetic resonance imaging (MRI) video of speech, and 2D midsagittal head animations based on MRI and UTI data. Find out more
The project explores Romantic-period accounts of journeys into Wales and Scotland with a focus on the writings of the Flintshire naturalist and antiquarian Thomas Pennant (1726-1798), whose published Tours of both countries did so much to awaken public interest in the ‘peripheries’ of Britain. Find out more
The Metaphor Map of English shows the metaphorical links which have been identified between different areas of meaning. These links can be from the Anglo-Saxon period right up to the present day so the map covers 1300 years of the English language. Find out more
Bess of Hardwick's Letters brings together, for the first time, the remarkable letters written to and from Bess of Hardwick (c.1521/2 or 1527-1608), one of Elizabethan England's most famous figures. Find out more
The Digital Catalogue documents, visually and textually, the first ten years of Andy Goldsworthy's ephemeral, outdoor practice. It replicates Goldsworthy's Slide Cabinet Index, and includes previously unpublished material from Goldsworthy's Sketchbook Diaries. Find out more
A publicly accessible, online scholarly edition of one of the most important archives of eighteenth-century medical "consultation letters", containing more than 20,000 digitised pages. Find out more
The Scots Syntax Atlas presents the results of over 100,000+ acceptability judgments from over 500 speakers on over 250 morphosyntactic phenomena. The Atlas also contains a text-to-sound aligned corpus of spoken data totalling 275 hours and over 3 million words. Find out more
James McNeill Whistler (1834-1903) was a major figure in 19th century printmaking and created 490 etchings. Over 9500 impressions of these prints have been located and investigated during the project, which completes a series of catalogues raisonnés of Whistler's oeuvre. Find out more

This week was mostly split between three projects – Mapping Metaphor, SAMUELS / Historical Thesaurus and the Dictionary of the Scots Language. For Mapping Metaphor I replaced all of the existing metaphor data with the newly reworked data. This version of the data has duplicates stripped out and ‘relevant’ and ‘noise’ connections removed. It took a little bit of time to get the data uploaded due to the changes we’d made to category numbers – the new data still had the old ‘A01’ style numbers and these had to be mapped onto the new ‘1A01’ style numbers. This caused some issues with the H27 category, which had been split into 6 smaller categories (H27A-H27F) and then needed mapped onto differently numbered categories. With Ellen’s help I got there in the end and the data now comprises of 18,179 rows, 5,949 of which are classed as ‘Strong’ metaphors.

Once the new data was uploaded and tested I returned once again to the timeline visualisations. It had previously been agreed that we would not make a timeline available whenever L2 categories are not expanded. Previously these had appeared on the timeline as squares represented the aggregate L2 category but their appearance was rather confusing (as I discussed in last week’s post). I wanted to try making some sort of timeline available when non-expanded L2 categories are visible and decided to see if it would be feasible to just expand all of these categories and squeeze them into the timeline view. It turned out that the timeline view was big enough to accommodate this data. I’ve also set it up so that if a particular L3 category is selected then all of the connections across the time periods that involve this category are highlighted in pink. The screenshot below shows all of the connections to / from categories within the L2 category ‘1E Animals’, with the L3 category ‘Birds’ selected. You’ll also see that it’s possible to find information about the selected L3 category through the left-hand info panel. 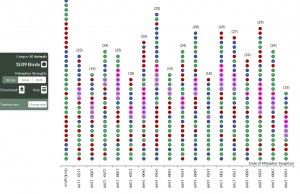 I spent some time this week trying to find out how to over-ride the default width of a column on the x-axis of the timeline so as to make the Old English section wider than the others. I’m afraid that so far I have been unable to find out how to do this as each axis is generated and subdivided programmatically by D3. I’ll continue to investigate this issue, but it’s not looking too promising.

The rest of the Mapping Metaphor time this week was spent on the top-level timeline view. I had an idea as to how to display all of the connections throughout time at this level: Display the number of connections between each L2 category that have a start date within each time period – e.g. all of the connections between 1A and 1J that take place between 1150 and 1199 would be represented by one square in the timeline. Hovering over the square would bring up information about how many connections between the two categories began during this time while clicking on the square would bring up the top-level metaphor card view as with the regular visualisation. I realised that there would be an awful lot of squares in the timeline and so began to investigate how these could be arranged. I worked out a way to have multiple columns of squares within each time period and figured out how to squeeze five squares in a row. This resulted in the overall impression of a bar chart with it actually being made up of individual squares of different colours. I think it looks quite nice, but I have some reservations about how useful such a visualisation might actually be. An example of the top-level timeline can be viewed below: 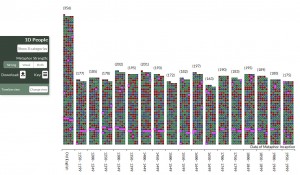 For SAMUELS / the Historical Thesaurus this week I met with Fraser to discuss the possibility of fixing the version 1 to current number converter. We’ve altered the category numbers quite significantly from the printed version of the HT and the converter (see http://historicalthesaurus.arts.gla.ac.uk/versions-and-changes/#converter) allows you to convert numbers from one form to another. Unfortunately there were several thousand categories that didn’t have a version 1 number specified in the database, leading to ‘not found’ warnings. Fraser had found a way to fix the problem and generated a spreadsheet with the necessary mappings. A wrote a little script to firstly check the data and then to apply the changes and we have managed to plug pretty much all of the gaps.

For DSL I travelled through to Edinburgh on Thursday to meet with Ann and Peter to discuss the post-launch updates that Ann would like Peter and I to implement. It was a really useful meeting and very good to catch up with Peter and Ann again as it was the first time since the launch that I had seen them. We went through Ann’s list and discussed everything and in most cases formulated a plan of action for getting things sorted. Hopefully over the coming weeks I will be able to devote a bit of time to these tasks.