The online catalogue includes some 550 oil paintings and over 1700 works on paper dating from ca 1850 to 1903. The evolution of each painting from sketch to final oil is described and illustrated. Find out more
The resource includes historical research for all Berwickshire place-names on the Ordnance Survey 1:50,000 Landranger map, including more than 1,600 place-names and 7,000 historical forms presented via a series of interactive maps. Find out more
The project explores Romantic-period accounts of journeys into Wales and Scotland with a focus on the writings of the Flintshire naturalist and antiquarian Thomas Pennant (1726-1798), whose published Tours of both countries did so much to awaken public interest in the ‘peripheries’ of Britain. Find out more
The University of Glasgow’s Historical Thesaurus of English is a unique resource charting the development of meaning in the huge and varied vocabulary of English. It consists of almost every recorded word in English from Anglo-Saxon times to the present day, all arranged into detailed hierarchies of meaning. Find out more
The Scottish Corpora project has created large electronic corpora of written and spoken texts for the languages of Scotland, featuring nearly 4.6 million words of text, with audio recordings to accompany many of the spoken texts. Find out more
The Digital Catalogue documents, visually and textually, the first ten years of Andy Goldsworthy's ephemeral, outdoor practice. It replicates Goldsworthy's Slide Cabinet Index, and includes previously unpublished material from Goldsworthy's Sketchbook Diaries. Find out more
The project provides a richly-illustrated Catalogue of all known architectural projects by Charles Rennie Mackintosh, including over 1200 drawings by Mackintosh and the practice, analytical and contextual essays, a timeline and glossary. Find out more
The resource provides ultrasound tongue imaging (UTI) and lip video of speech, magnetic resonance imaging (MRI) video of speech, and 2D midsagittal head animations based on MRI and UTI data. Find out more
James McNeill Whistler (1834-1903) was a major figure in 19th century printmaking and created 490 etchings. Over 9500 impressions of these prints have been located and investigated during the project, which completes a series of catalogues raisonnés of Whistler's oeuvre. Find out more
As told by some of Scotland's best writers, and illustrated with thousands of images from the collections of the city's world-famous libraries, museums and universities. From football to fashions, Auchenshuggle to Yoker, you'll find it all here. Find out more

I worked for several different projects this week.  For the Books and Borrowing project I processed and imported a further register for the Advocates library that had been digitised by the NLS.  I also continued with the interactive map of Chambers library borrowers, although I couldn’t spend as much time on this as I’d hoped as my access to Stirling University’s VPN had stopped working and without VPN access I can’t connect to the database and the project server.  It took a while to resolve the issue as access needs to be approved by some manager or other, but once it was sorted I got to work on some updates.

One thing I’d noticed last week was that when zooming and panning the historical map layer was throwing out hundreds of 403 Forbidden errors to the browser console.  This was not having any impact on the user experience, but was still a bit messy and I wanted to get to the bottom of the issue.  I had a very helpful (as always) chat with Chris Fleet at NLS Maps, who provided the historical map layer and he reckoned it was because the historical map only covers a certain area and moving beyond this was still sending requests for map tiles that didn’t exist.  Thankfully an option exists in Leaflet that allows you to set the boundaries for a map layer (https://leafletjs.com/reference.html#latlngbounds) and I updated the code to do just that, which seems to have stopped the errors.

I then returned to the occupations categorisation, which was including far too many options.  I therefore streamlined the occupations, displaying the top-level occupation only.  I think this works a lot better (although I need to change the icon colour for ‘unknown’).  Full occupation information is still available for each borrower via the popup.

I also had to change the range slider for opacity as standard HTML range sliders don’t allow for double-ended ranges.  We require a double-ended range for the subscription period and I didn’t want to have two range sliders that looked different on one page.  I therefore switched to a range slider offered by the jQuery UI interface library (https://jqueryui.com/slider/#range).  The opacity slider still works as before, it just looks a little different.  Actually, it works better than before, as the opacity now changes as you slide rather than only updating after you mouse-up.

I then began to implement the subscription period slider.  This does not yet update the data.  It’s been pretty tricky to implement this.  The range needs to be dynamically generated based on the earliest and latest dates in the data, and dates are both year and month, which need to be converted into plain integers for the slider and then reinterpreted as years and months when the user updates the end positions.  I think I’ve got this working as it should, though.  When you update the ends of the slider the text above that lists the months and years updates to reflect this.  The next step will be to actually filter the data based on the chosen period.  Here’s a screenshot of the map featuring data categorised by the new streamlined occupations and the new sliders displayed: 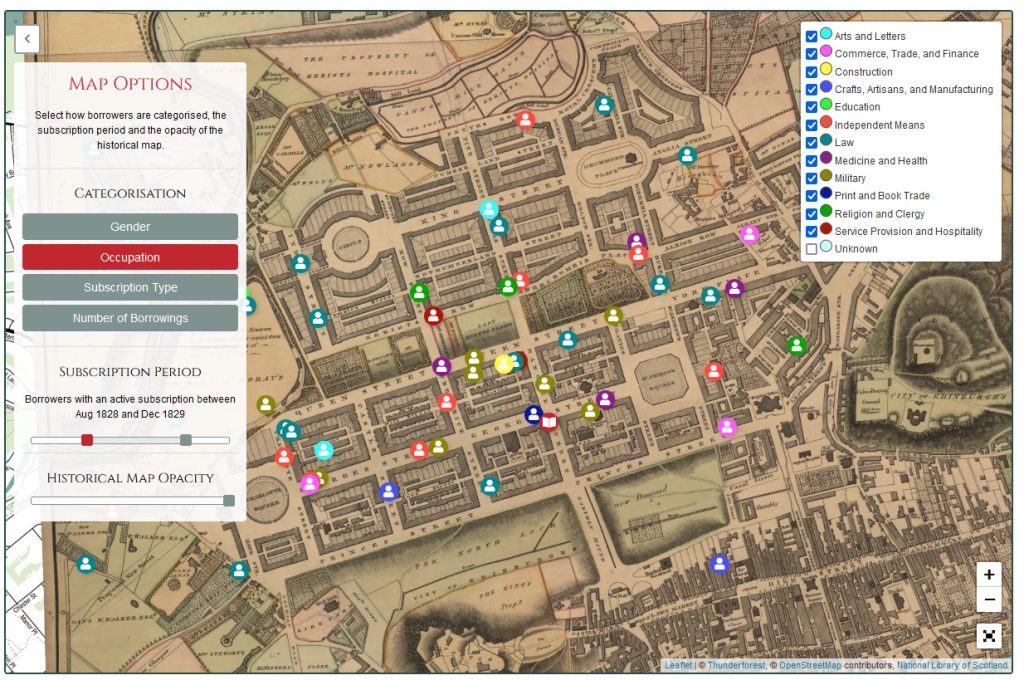 For the Speak For Yersel project I made a number of tweaks to the resource, which Jennifer and Mary are piloting with school children in the North East this week.  I added in a new grammatical question and seven grammatical quiz questions.  I tweaked the homepage text and updated the structure of questions 27-29 of the ‘sound about right’ activity.  I ensured that ‘Dumfries’ always appears as ‘Dumfries and Galloway’ in the ‘clever’ activity and follow-on and updated the ‘clever’ activity to remove the stereotype questions.  These were the ones where users had to rate the speakers from a region without first listening to any audio clips and Jennifer reckoned these were taking too long to complete.  I also updated the ‘clever’ follow-on to hide the stereotype options and switched the order of the listener and speaker options in the other follow-on activity for this type.

For the Speech Star project I replaced the data for the child speech error database with a new, expanded dataset and added in ‘Speaker Code’ as a filter option.  I also replicated the child speech and normalised speech databases from the clinical website we’re creating on the more academic teaching site we’re creating and also pulled in the IPA chart from Seeing Speech into this resource too.  Here’s a screenshot of how the child speech error database looks with the new ‘speaker code’ filter with ‘vowel disorder’ selected: 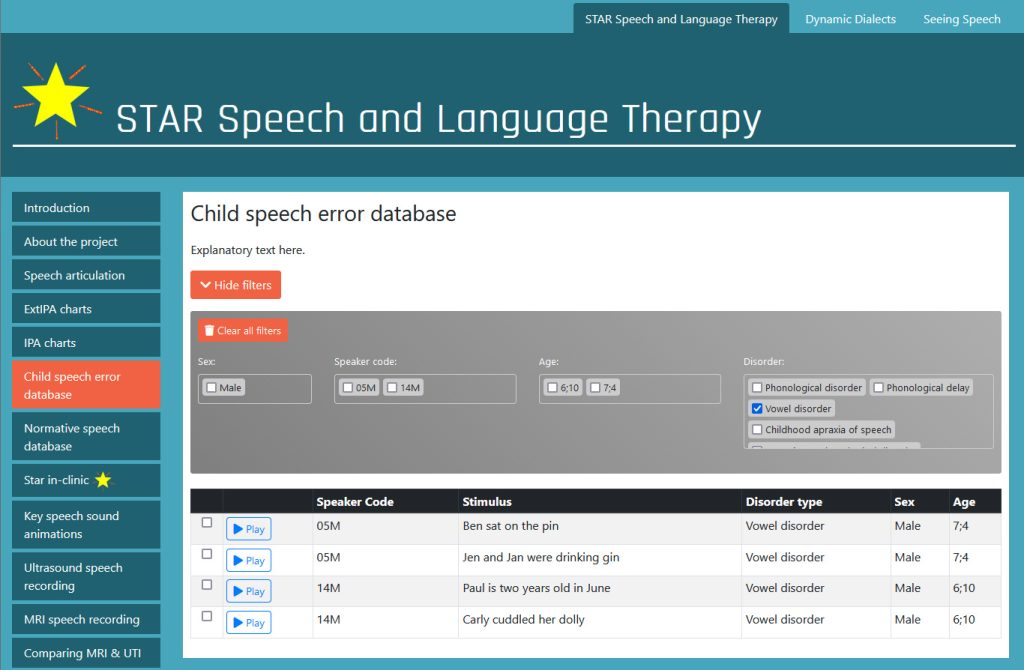 I also responded to Craig Lamont in Scottish literature with some further feedback on the structure of his Burns Manuscript Database spreadsheet, which is now shaping up nicely.  Craig had also sent me an updated spreadsheet with data for the Ramsay Gentle Shepherd performances project.  I’d set this up (interactive map, timeline and filterable tabular data) a few weeks ago, migrating it to the University’s T4 website management system.  All had worked then but when I logged into T4 and previewed the page I previously created I discovered it longer worked.  The page hadn’t been updated since the end of May and I had no idea what’s gone wrong.  I can only assume that the linked content (i.e. the links to the JavaScript files) had somehow become unlinked.  I decided, therefore, that it would be easier to just host the JavaScript files on another server I have direct access to rather than having to shoehorn it all into T4.  I made an updated version with the new dataset and this is working well.

I also made a couple of tweaks to the DSL this week, installing the TablePress plugin for the ancillary pages and creating a further alternative logo for the DSL’s Facebook posts.  I also returned to going some work for the Anglo-Norman Dictionary, offering some advice to the editor Geert about incorporating publications and overhauling how cross references are displayed in the Dictionary Management System.

I updated the ‘View Entry’ page in the DMS.  Previously it only included cross references FROM the entry you’re looking at TO any other entries.  I.e. it only displayed content when the entry was of type ‘xref’ rather than ‘main’.  Now in addition to this there’s a further section listing all cross references TO the entry you’re looking at from any entry of type ‘xref’ that links to it.

In addition there is a button allowing you to view all entries that include a cross reference to the current entry anywhere in their XML – i.e. where an <xref> tag that features the current entry’s slug is found at any level in any other main entry’s XML.  This code is hugely memory intensive to run, as basically all 27,464 main entries need to be pulled into the script, with the full XML contents of each checked for matching xrefs.  For this reason the page doesn’t run the code each time the ‘view entry’ page is loaded but instead only runs when you actively press the button.  It takes a few seconds for the script to process, but after it does the cross references are listed in the same manner as the ‘pure’ xrefs in the preceding sections.

Finally I participated in a Zoom-based focus group for the AHRC about the role of technicians in research projects this week.  It was great to participate to share my views on my role and to hear from other people with similar roles at other organisations.