As told by some of Scotland's best writers, and illustrated with thousands of images from the collections of the city's world-famous libraries, museums and universities. From football to fashions, Auchenshuggle to Yoker, you'll find it all here. Find out more
Bess of Hardwick's Letters brings together, for the first time, the remarkable letters written to and from Bess of Hardwick (c.1521/2 or 1527-1608), one of Elizabethan England's most famous figures. Find out more
A database of all known people of Scotland between 1093 and 1314 mentioned in over 8600 contemporary documents. It is also being extended to 1371 to include all those lands, peoples and relationships mentioned in royal charters between 1314 and 1371. Find out more
The Metaphor Map of English shows the metaphorical links which have been identified between different areas of meaning. These links can be from the Anglo-Saxon period right up to the present day so the map covers 1300 years of the English language. Find out more
The University of Glasgow’s Historical Thesaurus of English is a unique resource charting the development of meaning in the huge and varied vocabulary of English. It consists of almost every recorded word in English from Anglo-Saxon times to the present day, all arranged into detailed hierarchies of meaning. Find out more
The project explores Romantic-period accounts of journeys into Wales and Scotland with a focus on the writings of the Flintshire naturalist and antiquarian Thomas Pennant (1726-1798), whose published Tours of both countries did so much to awaken public interest in the ‘peripheries’ of Britain. Find out more
James McNeill Whistler (1834-1903) was a major figure in 19th century printmaking and created 490 etchings. Over 9500 impressions of these prints have been located and investigated during the project, which completes a series of catalogues raisonnés of Whistler's oeuvre. Find out more
The online catalogue includes some 550 oil paintings and over 1700 works on paper dating from ca 1850 to 1903. The evolution of each painting from sketch to final oil is described and illustrated. Find out more
The project provides a richly-illustrated Catalogue of all known architectural projects by Charles Rennie Mackintosh, including over 1200 drawings by Mackintosh and the practice, analytical and contextual essays, a timeline and glossary. Find out more
A publicly accessible, online scholarly edition of one of the most important archives of eighteenth-century medical "consultation letters", containing more than 20,000 digitised pages. Find out more
project

The project brings together a range of resources and archive records to produce an integrated account of the beginnings of cinema in Scotland, including more than 600 venues and 500 films. 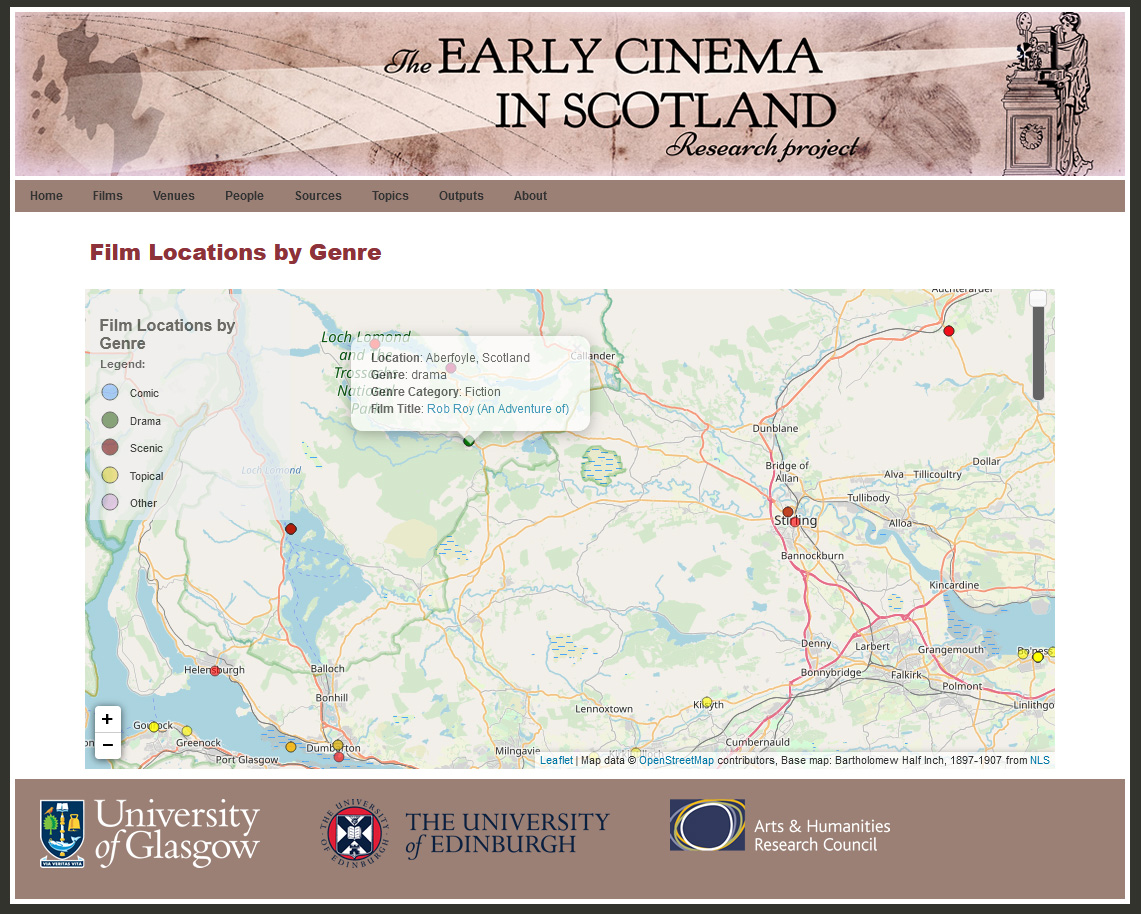 The central aim of the project is to produce a comprehensive account of the early development of cinema in Scotland. Where were the early films shown; who by and to whom? In what ways did cinema, within thirty years, become a major cultural form? How were the expectations of cinema defined; what social, cultural and aesthetic values were ascribed to it; and how was the experience of cinema described in the press and other sources?

This will be the first major attempt to bring together systematically a range of resources and archive records on the beginnings of cinema in Scotland. It will cover production, distribution, exhibition and reception in order to understand the place of cinema in the early years of the twentieth century: the phenomenon which Francesco Casetti describes as "the popularization of modernity and the modernization of popularity."

Find out more about the experience of 'going to the pictures' in over 600 venues, from the drill halls of the 1900s and 1910s to the 'picture palaces' of the 1920s, and from the early touring variety shows and concert parties to the rise of the feature film and the dominance of Hollywood.

Browse or search the annotated filmography to learn about the six silent feature films released by Scottish companies, and about the wealth of non-fiction productions, including extraordinary 'local topical' films, scenic and travel films. Scottish stories, characters, or themes were popular in silent-era films from around the world, and are also discussed here.