The Digital Catalogue documents, visually and textually, the first ten years of Andy Goldsworthy's ephemeral, outdoor practice. It replicates Goldsworthy's Slide Cabinet Index, and includes previously unpublished material from Goldsworthy's Sketchbook Diaries. Find out more
The resource provides ultrasound tongue imaging (UTI) and lip video of speech, magnetic resonance imaging (MRI) video of speech, and 2D midsagittal head animations based on MRI and UTI data. Find out more
The project explores Romantic-period accounts of journeys into Wales and Scotland with a focus on the writings of the Flintshire naturalist and antiquarian Thomas Pennant (1726-1798), whose published Tours of both countries did so much to awaken public interest in the ‘peripheries’ of Britain. Find out more
The project provides a richly-illustrated Catalogue of all known architectural projects by Charles Rennie Mackintosh, including over 1200 drawings by Mackintosh and the practice, analytical and contextual essays, a timeline and glossary. Find out more
The resource includes historical research for all Berwickshire place-names on the Ordnance Survey 1:50,000 Landranger map, including more than 1,600 place-names and 7,000 historical forms presented via a series of interactive maps. Find out more
James McNeill Whistler (1834-1903) was a major figure in 19th century printmaking and created 490 etchings. Over 9500 impressions of these prints have been located and investigated during the project, which completes a series of catalogues raisonnés of Whistler's oeuvre. Find out more
The Scottish Corpora project has created large electronic corpora of written and spoken texts for the languages of Scotland, featuring nearly 4.6 million words of text, with audio recordings to accompany many of the spoken texts. Find out more
The University of Glasgow’s Historical Thesaurus of English is a unique resource charting the development of meaning in the huge and varied vocabulary of English. It consists of almost every recorded word in English from Anglo-Saxon times to the present day, all arranged into detailed hierarchies of meaning. Find out more
The online catalogue includes some 550 oil paintings and over 1700 works on paper dating from ca 1850 to 1903. The evolution of each painting from sketch to final oil is described and illustrated. Find out more
The Metaphor Map of English shows the metaphorical links which have been identified between different areas of meaning. These links can be from the Anglo-Saxon period right up to the present day so the map covers 1300 years of the English language. Find out more
project

The project explores the history of working-class courtship, marriage and marriage breakdown in Scotland in the period from the civil registration of marriages in 1855 to the introduction of no-fault divorce legislation in 1976. 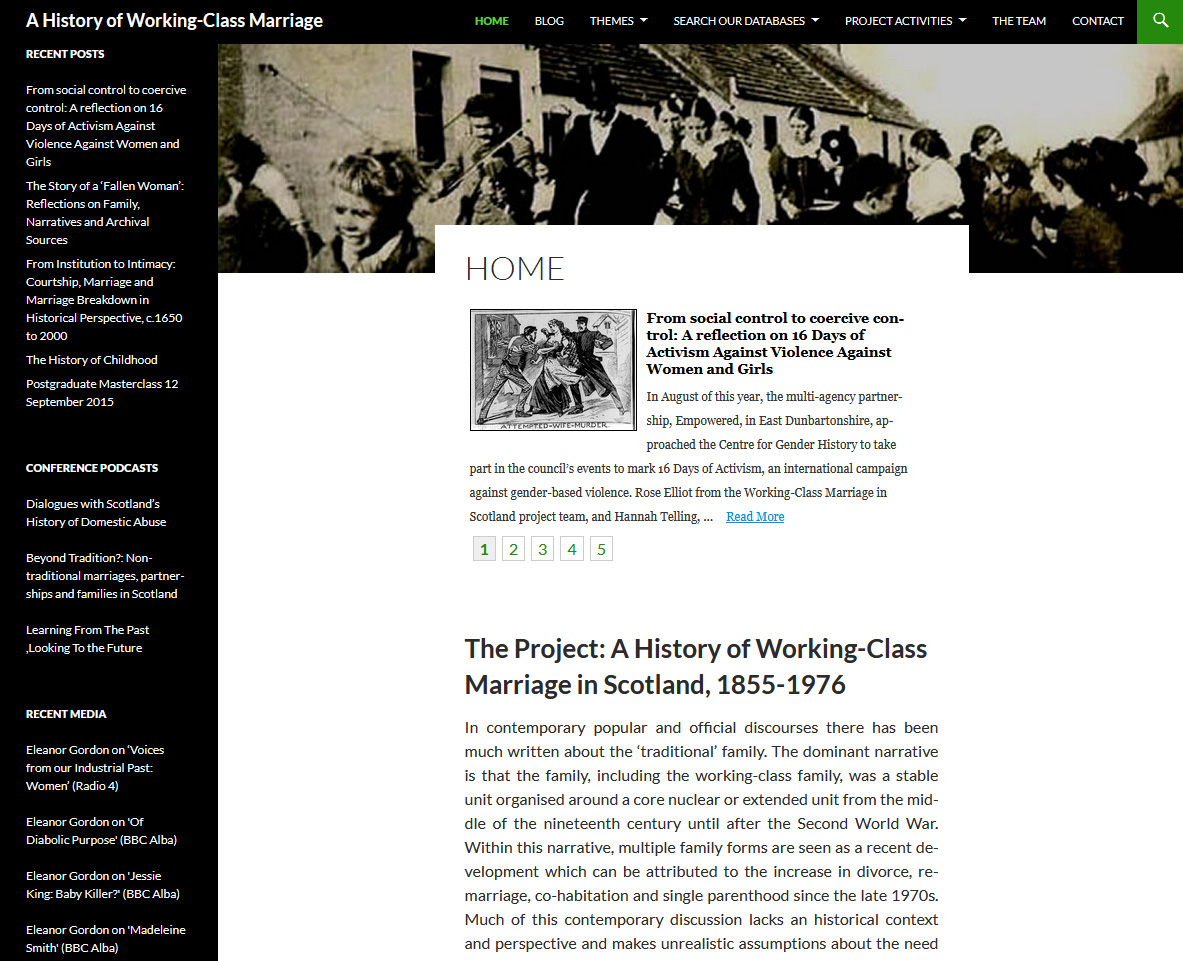 In contemporary popular and official discourses there has been much written about the "traditional" family. The dominant narrative is that the family, including the working-class family, was a stable unit organised around a core nuclear or extended unit from the middle of the nineteenth century until after the Second World War. Within this narrative, multiple family forms are seen as a recent development which can be attributed to the increase in divorce, remarriage, co-habitation and single parenthood since the late 1970s. Much of this contemporary discussion lacks an historical context and perspective and makes unrealistic assumptions about the need to recreate the "traditional" family.

This project engages with these discourses and explores the history of working-class courtship, marriage and marriage breakdown in Scotland in the period from the civil registration of marriages in 1855 to the introduction of no-fault divorce legislation in 1976. The project aims to establish the structure and form of the working-class family over time; to identify the basis of selection of choice of marriage partner; to examine the nature of the relationship between husbands and wives and to establish the pattern, causes and consequences of marriage breakdown.

The project's aims are:

As well as contributing to academic debate, the project worked with practitioners including Scottish Women’s Aid and Learning and Teaching Scotland in order to contribute to the public debate on marriage and marriage breakdown and to inform educational practice. A database of household information and interactive maps were produced for use in schools, as well as a website of interest to family historians, genealogists and the Scottish Diaspora.