The Digital Catalogue documents, visually and textually, the first ten years of Andy Goldsworthy's ephemeral, outdoor practice. It replicates Goldsworthy's Slide Cabinet Index, and includes previously unpublished material from Goldsworthy's Sketchbook Diaries. Find out more
The project provides a richly-illustrated Catalogue of all known architectural projects by Charles Rennie Mackintosh, including over 1200 drawings by Mackintosh and the practice, analytical and contextual essays, a timeline and glossary. Find out more
The resource provides ultrasound tongue imaging (UTI) and lip video of speech, magnetic resonance imaging (MRI) video of speech, and 2D midsagittal head animations based on MRI and UTI data. Find out more
A publicly accessible, online scholarly edition of one of the most important archives of eighteenth-century medical "consultation letters", containing more than 20,000 digitised pages. Find out more
A database of all known people of Scotland between 1093 and 1314 mentioned in over 8600 contemporary documents. It is also being extended to 1371 to include all those lands, peoples and relationships mentioned in royal charters between 1314 and 1371. Find out more
The project explores Romantic-period accounts of journeys into Wales and Scotland with a focus on the writings of the Flintshire naturalist and antiquarian Thomas Pennant (1726-1798), whose published Tours of both countries did so much to awaken public interest in the ‘peripheries’ of Britain. Find out more
The online catalogue includes some 550 oil paintings and over 1700 works on paper dating from ca 1850 to 1903. The evolution of each painting from sketch to final oil is described and illustrated. Find out more
The Scottish Corpora project has created large electronic corpora of written and spoken texts for the languages of Scotland, featuring nearly 4.6 million words of text, with audio recordings to accompany many of the spoken texts. Find out more
The University of Glasgow’s Historical Thesaurus of English is a unique resource charting the development of meaning in the huge and varied vocabulary of English. It consists of almost every recorded word in English from Anglo-Saxon times to the present day, all arranged into detailed hierarchies of meaning. Find out more
Bess of Hardwick's Letters brings together, for the first time, the remarkable letters written to and from Bess of Hardwick (c.1521/2 or 1527-1608), one of Elizabethan England's most famous figures. Find out more
project

The project produced an electronic edition of a selection of the Delitiae Poetarum Scotorum, the largest anthology of Scottish neo-Latin  poetry ever produced.  The edition features original scans of the entire 1,272 page text, and a full transcription and translation of 11 of the 37 poets featured. 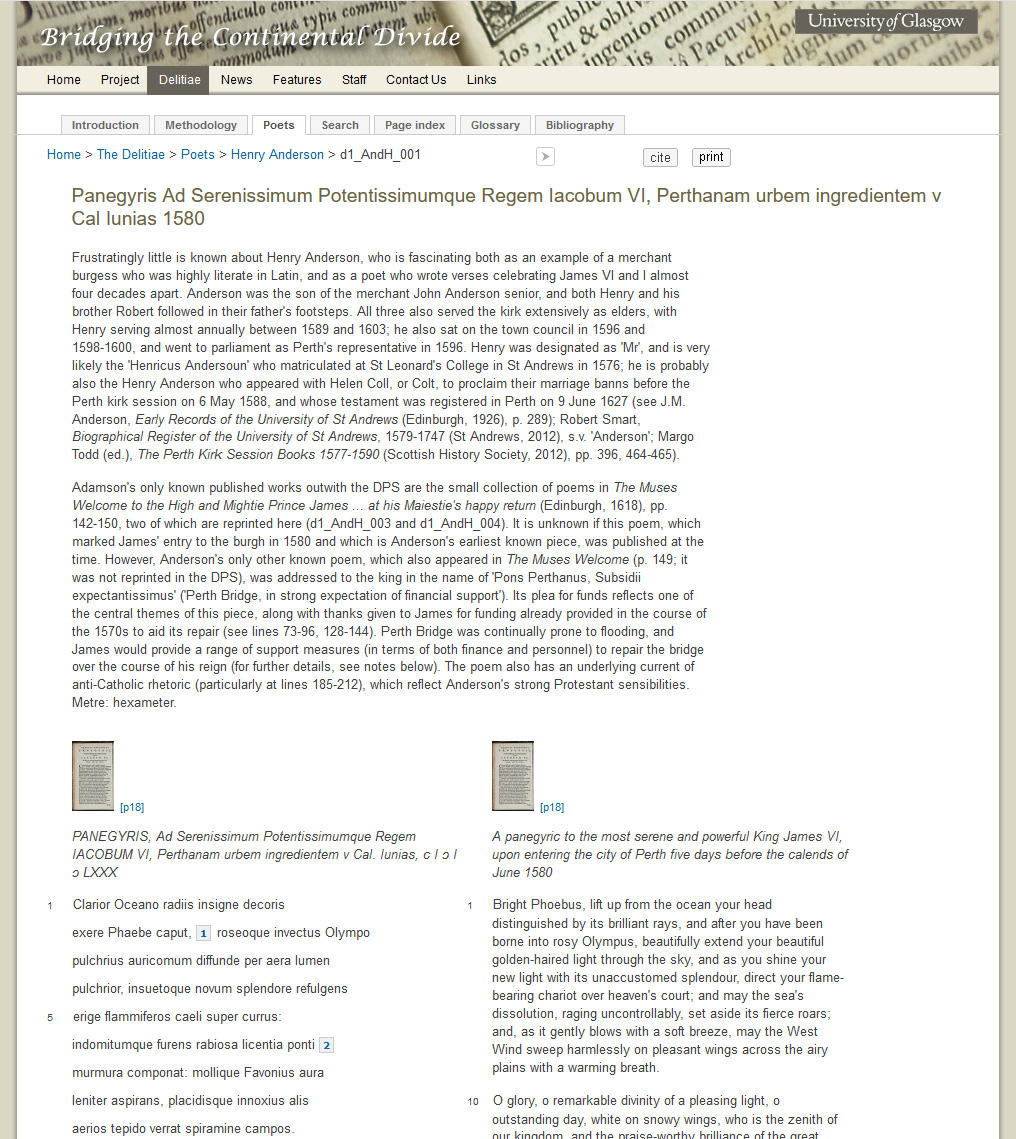 Biography, poems and translations of the poet Henry Anderson

Bridging the Continental Divide was a project funded by the AHRC and based in the School of Humanities at the University of Glasgow between August 2012 and July 2015. The project's main aim was to produce an electronic edition of a selection of the Delitiae Poetarum Scotorum huius aevi illustrium (DPS, Amsterdam, 1637), the largest anthology of Scottish neo-Latin  poetry ever produced, which was edited by the Fife laird Sir John Scot of Scotstarvit and the Aberdonian poet Arthur Johnstone. The resource provides original scans of the entire 1,272 page text, and a full transcription and translation of 11 of the 37 poets featured within it, totalling 335 pages. Each poem features a full critical apparatus detailing all scriptural and philological references cited, historical and social context, and biographical material on each poet. The website is open ended so that the remainder of the text not translated now can be added by scholars in the future. This resource will allow scholars to understand more fully when and why Latin was used in Jacobean Scotland, and how it interacted with the Protestant culture that dominated early modern Scottish society.

Poems can be browsed in the order in which they appear in the DPS on the poets page, while those looking for the use of specific Latin terms, phrases or authors in the texts, or interested in seeing if the poets discuss specific historical events or figures, can look for these using the search page. Each poem has a short introduction explaining its context (where known) and providing any information about original publication and/or delivery; the recipient or dedicatee, if the poem is addressed to or about a place or person; and the major themes and issues discussed. Page numbers in the original text are given in square brackets in both the Latin text and the English translation, with a thumbnail of the original page which links to a full-size image.