A publicly accessible, online scholarly edition of one of the most important archives of eighteenth-century medical "consultation letters", containing more than 20,000 digitised pages. Find out more
Bess of Hardwick's Letters brings together, for the first time, the remarkable letters written to and from Bess of Hardwick (c.1521/2 or 1527-1608), one of Elizabethan England's most famous figures. Find out more
The online catalogue includes some 550 oil paintings and over 1700 works on paper dating from ca 1850 to 1903. The evolution of each painting from sketch to final oil is described and illustrated. Find out more
The project explores Romantic-period accounts of journeys into Wales and Scotland with a focus on the writings of the Flintshire naturalist and antiquarian Thomas Pennant (1726-1798), whose published Tours of both countries did so much to awaken public interest in the ‘peripheries’ of Britain. Find out more
The resource provides ultrasound tongue imaging (UTI) and lip video of speech, magnetic resonance imaging (MRI) video of speech, and 2D midsagittal head animations based on MRI and UTI data. Find out more
As told by some of Scotland's best writers, and illustrated with thousands of images from the collections of the city's world-famous libraries, museums and universities. From football to fashions, Auchenshuggle to Yoker, you'll find it all here. Find out more
The project provides a richly-illustrated Catalogue of all known architectural projects by Charles Rennie Mackintosh, including over 1200 drawings by Mackintosh and the practice, analytical and contextual essays, a timeline and glossary. Find out more
The Metaphor Map of English shows the metaphorical links which have been identified between different areas of meaning. These links can be from the Anglo-Saxon period right up to the present day so the map covers 1300 years of the English language. Find out more
James McNeill Whistler (1834-1903) was a major figure in 19th century printmaking and created 490 etchings. Over 9500 impressions of these prints have been located and investigated during the project, which completes a series of catalogues raisonnés of Whistler's oeuvre. Find out more
The University of Glasgow’s Historical Thesaurus of English is a unique resource charting the development of meaning in the huge and varied vocabulary of English. It consists of almost every recorded word in English from Anglo-Saxon times to the present day, all arranged into detailed hierarchies of meaning. Find out more
project

A digital edition of William Forbes’ Great Body of the Law of Scotland. 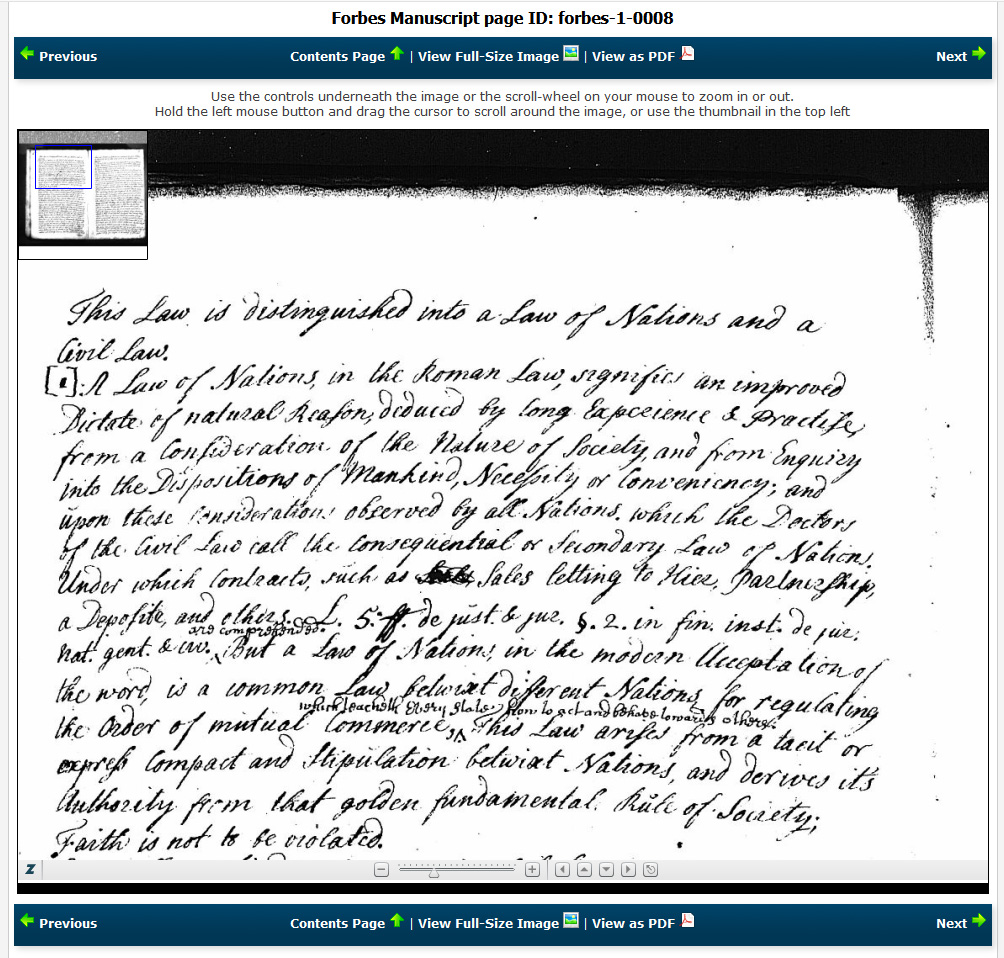 A page of the Forbes manuscript

William Forbes (1668?-1745) was the first holder of the Regius Chair in Civil Law at the University of Glasgow.  Appointed to the Chair in 1714, he continued to teach at Glasgow until 1739.  Forbes is generally considered to have been a relatively minor Scottish jurist of the period.  But in one respect Forbes made an exceptional scholarly contribution: throughout his tenure of the Chair he was at work on major treatise, The Great Body of the Law of Scotland.  Alas, it appears the Great Body was never finished, for it was never published.  But the great manuscript folio volumes, containing a life's work, have lain, ever since, in the Glasgow University Library known only to a few dedicated legal historians.  And although some superb research by Professor John Cairns, in particular, gives us now some idea of Forbes' life and times, there has not yet been an opportunity to appraise properly Forbes' scholarly contributions. One estimate suggests that the Great Body extends to a million words.  On any analysis, the work deserves to be better known.