A publicly accessible, online scholarly edition of one of the most important archives of eighteenth-century medical "consultation letters", containing more than 20,000 digitised pages. Find out more
The Scots Syntax Atlas presents the results of over 100,000+ acceptability judgments from over 500 speakers on over 250 morphosyntactic phenomena. The Atlas also contains a text-to-sound aligned corpus of spoken data totalling 275 hours and over 3 million words. Find out more
The University of Glasgow’s Historical Thesaurus of English is a unique resource charting the development of meaning in the huge and varied vocabulary of English. It consists of almost every recorded word in English from Anglo-Saxon times to the present day, all arranged into detailed hierarchies of meaning. Find out more
A database of all known people of Scotland between 1093 and 1314 mentioned in over 8600 contemporary documents. It is also being extended to 1371 to include all those lands, peoples and relationships mentioned in royal charters between 1314 and 1371. Find out more
As told by some of Scotland's best writers, and illustrated with thousands of images from the collections of the city's world-famous libraries, museums and universities. From football to fashions, Auchenshuggle to Yoker, you'll find it all here. Find out more
The project explores Romantic-period accounts of journeys into Wales and Scotland with a focus on the writings of the Flintshire naturalist and antiquarian Thomas Pennant (1726-1798), whose published Tours of both countries did so much to awaken public interest in the ‘peripheries’ of Britain. Find out more
The project provides a richly-illustrated Catalogue of all known architectural projects by Charles Rennie Mackintosh, including over 1200 drawings by Mackintosh and the practice, analytical and contextual essays, a timeline and glossary. Find out more
The Metaphor Map of English shows the metaphorical links which have been identified between different areas of meaning. These links can be from the Anglo-Saxon period right up to the present day so the map covers 1300 years of the English language. Find out more
The resource provides ultrasound tongue imaging (UTI) and lip video of speech, magnetic resonance imaging (MRI) video of speech, and 2D midsagittal head animations based on MRI and UTI data. Find out more
James McNeill Whistler (1834-1903) was a major figure in 19th century printmaking and created 490 etchings. Over 9500 impressions of these prints have been located and investigated during the project, which completes a series of catalogues raisonnés of Whistler's oeuvre. Find out more
project

The project documents the commercial and artist led world of the London gallery beyond major institutions such as the Royal Academy and records over 3,000 exhibitions and 900 galleries in London between 1878 and 1908. 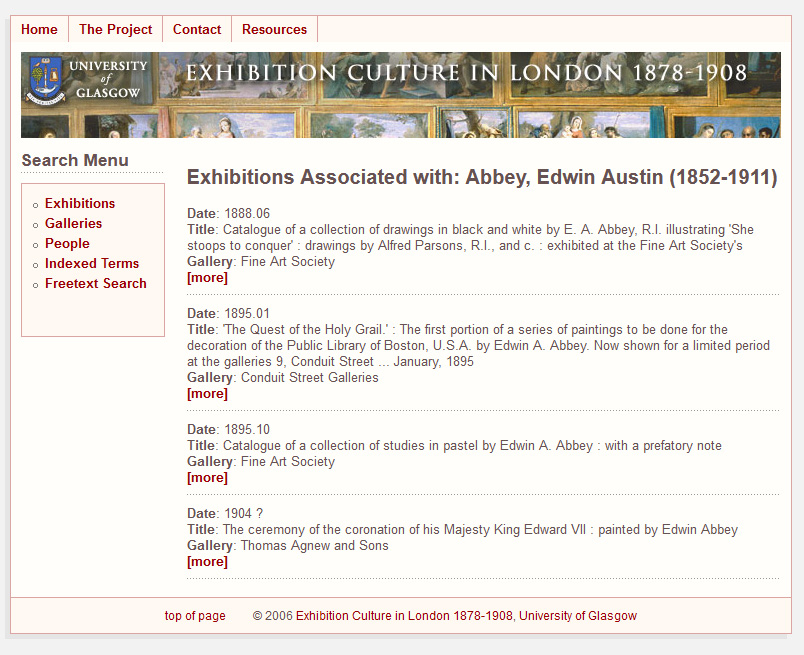 Editorial policy has been to select those that have received less scholarly attention or none at all. Our intention has been to include all types of gallery, from the most humble (some of these only documented through census records) to the most commercially successful (such as Goupil's, Thomas MacLean's and Agnew's) that became international businesses.

The Royal Academy and the Grosvenor Gallery have been (by comparison with many of the galleries documented here) relatively well recorded through printed and other sources. For similar reasons, major exhibition societies like the Royal Society of British Artists, the New English Art Club, the Royal Institute of Painters in Watercolours and the Royal Institute of Painters in Oil Colours are also excluded. However some societies (such as the Society of Portrait Painters, the Society of Miniaturists and the Society of Lady Artists) held exhibitions under the aegis of smaller-scale commercial galleries. These exhibitions have been included, as their omission would leave an unnecessary gap in recording the pattern of exhibitions at a particular gallery site.

We have erred elsewhere on the side of inclusion. Exhibition and gallery records have come from a variety of sources - exhibition catalogues, manuscript sources, press-cuttings, newspapers, periodicals, yearbooks and local directories. Some of these records are very complete but others are partial at best. Sometimes nineteenth century definitions of the word exhibition are at variance with our modern understanding of the concept. Occasionally exhibitions were cancelled and replaced by others. Printing and other errors appear in the exhibition catalogues - sometimes the Fourth Annual Exhibition of Watercolours at Mr Brown's Gallery, 1886 is followed by the Sixth Annual Exhibition of Watercolours at Mr Brown's Gallery, 1887. Sketchy records have been included on the basis that verification and expansion of the information can be built up over time.

While an important aim of this project has been to provide new documentation about as many businesses and exhibition societies as possible, our focus is necessarily on exploring exhibitions - the artists and others associated with each one, the types of art on display, and the exhibition policies of the gallery. Thus the exhibition becomes a filter through which this project views the activity of the London art market in the late nineteenth century.