The Digital Catalogue documents, visually and textually, the first ten years of Andy Goldsworthy's ephemeral, outdoor practice. It replicates Goldsworthy's Slide Cabinet Index, and includes previously unpublished material from Goldsworthy's Sketchbook Diaries. Find out more
The project provides a richly-illustrated Catalogue of all known architectural projects by Charles Rennie Mackintosh, including over 1200 drawings by Mackintosh and the practice, analytical and contextual essays, a timeline and glossary. Find out more
The Scots Syntax Atlas presents the results of over 100,000+ acceptability judgments from over 500 speakers on over 250 morphosyntactic phenomena. The Atlas also contains a text-to-sound aligned corpus of spoken data totalling 275 hours and over 3 million words. Find out more
James McNeill Whistler (1834-1903) was a major figure in 19th century printmaking and created 490 etchings. Over 9500 impressions of these prints have been located and investigated during the project, which completes a series of catalogues raisonnés of Whistler's oeuvre. Find out more
The project explores Romantic-period accounts of journeys into Wales and Scotland with a focus on the writings of the Flintshire naturalist and antiquarian Thomas Pennant (1726-1798), whose published Tours of both countries did so much to awaken public interest in the ‘peripheries’ of Britain. Find out more
The resource provides ultrasound tongue imaging (UTI) and lip video of speech, magnetic resonance imaging (MRI) video of speech, and 2D midsagittal head animations based on MRI and UTI data. Find out more
The Scottish Corpora project has created large electronic corpora of written and spoken texts for the languages of Scotland, featuring nearly 4.6 million words of text, with audio recordings to accompany many of the spoken texts. Find out more
The University of Glasgow’s Historical Thesaurus of English is a unique resource charting the development of meaning in the huge and varied vocabulary of English. It consists of almost every recorded word in English from Anglo-Saxon times to the present day, all arranged into detailed hierarchies of meaning. Find out more
The Metaphor Map of English shows the metaphorical links which have been identified between different areas of meaning. These links can be from the Anglo-Saxon period right up to the present day so the map covers 1300 years of the English language. Find out more
The resource includes historical research for all Berwickshire place-names on the Ordnance Survey 1:50,000 Landranger map, including more than 1,600 place-names and 7,000 historical forms presented via a series of interactive maps. Find out more
project

The database collects and itemises the correspondence written to and by James Currie, the first biographer and editor of Robert Burns. 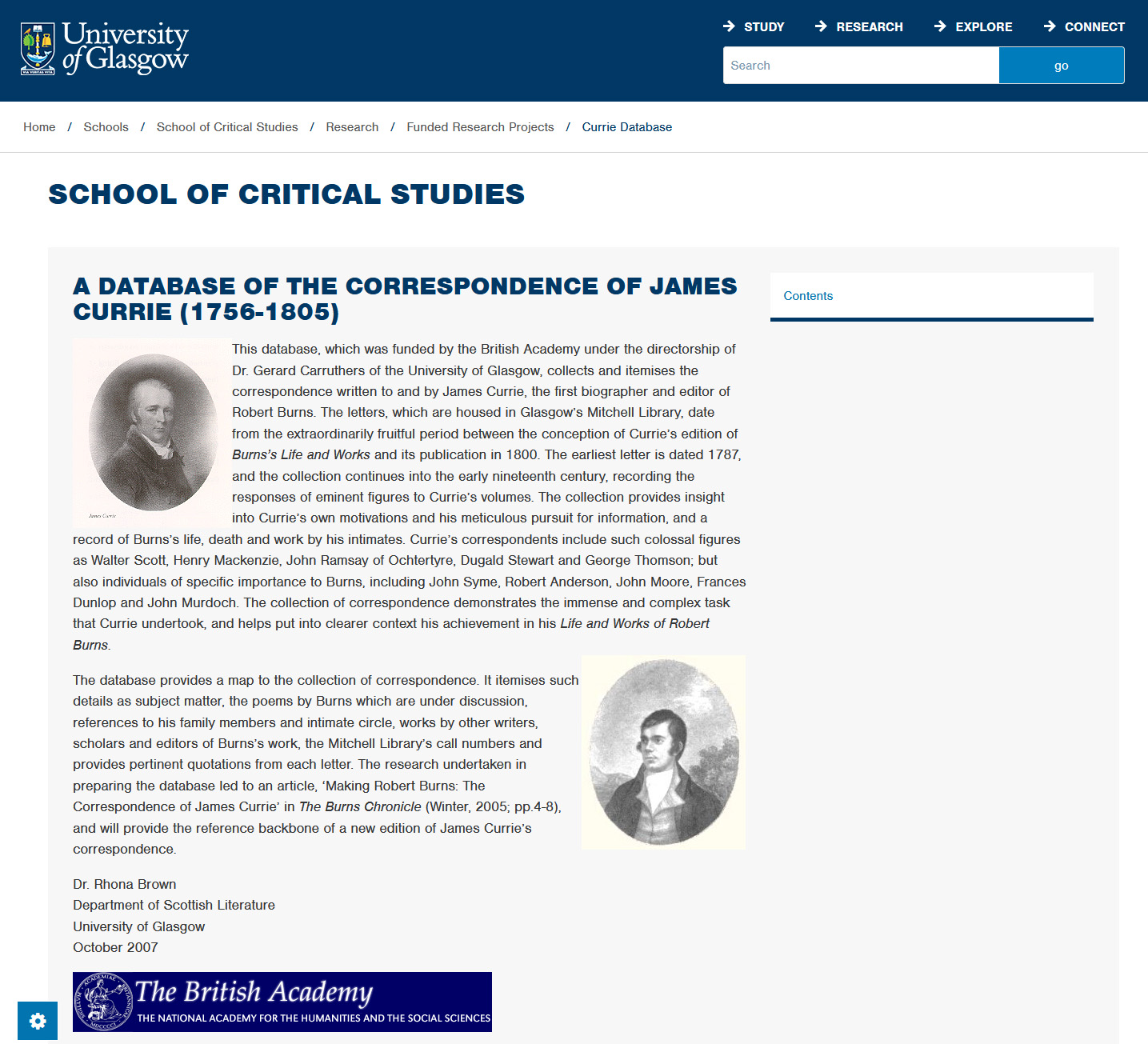 Introduction to the database

This database, which was funded by the British Academy under the directorship of Dr. Gerard Carruthers of the University of Glasgow, collects and itemises the correspondence written to and by James Currie, the first biographer and editor of Robert Burns. The letters, which are housed in Glasgow’s Mitchell Library, date from the extraordinarily fruitful period between the conception of Currie’s edition of Burns’s Life and Works and its publication in 1800. The earliest letter is dated 1787, and the collection continues into the early nineteenth century, recording the responses of eminent figures to Currie’s volumes. The collection provides insight into Currie’s own motivations and his meticulous pursuit for information, and a record of Burns’s life, death and work by his intimates. Currie’s correspondents include such colossal figures as Walter Scott, Henry Mackenzie, John Ramsay of Ochtertyre, Dugald Stewart and George Thomson; but also individuals of specific importance to Burns, including John Syme, Robert Anderson, John Moore, Frances Dunlop and John Murdoch. The collection of correspondence demonstrates the immense and complex task that Currie undertook, and helps put into clearer context his achievement in his Life and Works of Robert Burns.

The database provides a map to the collection of correspondence. It itemises such details as subject matter, the poems by Burns which are under discussion, references to his family members and intimate circle, works by other writers, scholars and editors of Burns’s work, the Mitchell Library’s call numbers and provides pertinent quotations from each letter. The research undertaken in preparing the database led to an article, ‘Making Robert Burns: The Correspondence of James Currie’ in The Burns Chronicle (Winter, 2005; pp.4-8), and will provide the reference backbone of a new edition of James Currie’s correspondence.