The Digital Catalogue documents, visually and textually, the first ten years of Andy Goldsworthy's ephemeral, outdoor practice. It replicates Goldsworthy's Slide Cabinet Index, and includes previously unpublished material from Goldsworthy's Sketchbook Diaries. Find out more
A publicly accessible, online scholarly edition of one of the most important archives of eighteenth-century medical "consultation letters", containing more than 20,000 digitised pages. Find out more
Bess of Hardwick's Letters brings together, for the first time, the remarkable letters written to and from Bess of Hardwick (c.1521/2 or 1527-1608), one of Elizabethan England's most famous figures. Find out more
The project explores Romantic-period accounts of journeys into Wales and Scotland with a focus on the writings of the Flintshire naturalist and antiquarian Thomas Pennant (1726-1798), whose published Tours of both countries did so much to awaken public interest in the ‘peripheries’ of Britain. Find out more
As told by some of Scotland's best writers, and illustrated with thousands of images from the collections of the city's world-famous libraries, museums and universities. From football to fashions, Auchenshuggle to Yoker, you'll find it all here. Find out more
The Metaphor Map of English shows the metaphorical links which have been identified between different areas of meaning. These links can be from the Anglo-Saxon period right up to the present day so the map covers 1300 years of the English language. Find out more
The project provides a richly-illustrated Catalogue of all known architectural projects by Charles Rennie Mackintosh, including over 1200 drawings by Mackintosh and the practice, analytical and contextual essays, a timeline and glossary. Find out more
The Scottish Corpora project has created large electronic corpora of written and spoken texts for the languages of Scotland, featuring nearly 4.6 million words of text, with audio recordings to accompany many of the spoken texts. Find out more
The resource includes historical research for all Berwickshire place-names on the Ordnance Survey 1:50,000 Landranger map, including more than 1,600 place-names and 7,000 historical forms presented via a series of interactive maps. Find out more
The University of Glasgow’s Historical Thesaurus of English is a unique resource charting the development of meaning in the huge and varied vocabulary of English. It consists of almost every recorded word in English from Anglo-Saxon times to the present day, all arranged into detailed hierarchies of meaning. Find out more
project

Scots Words and Place-names (SWAP) aimed to engage the Scottish public in talking about the Scots words that they use and hear around them and features a comprehensive glossary of Scots place-name elements. 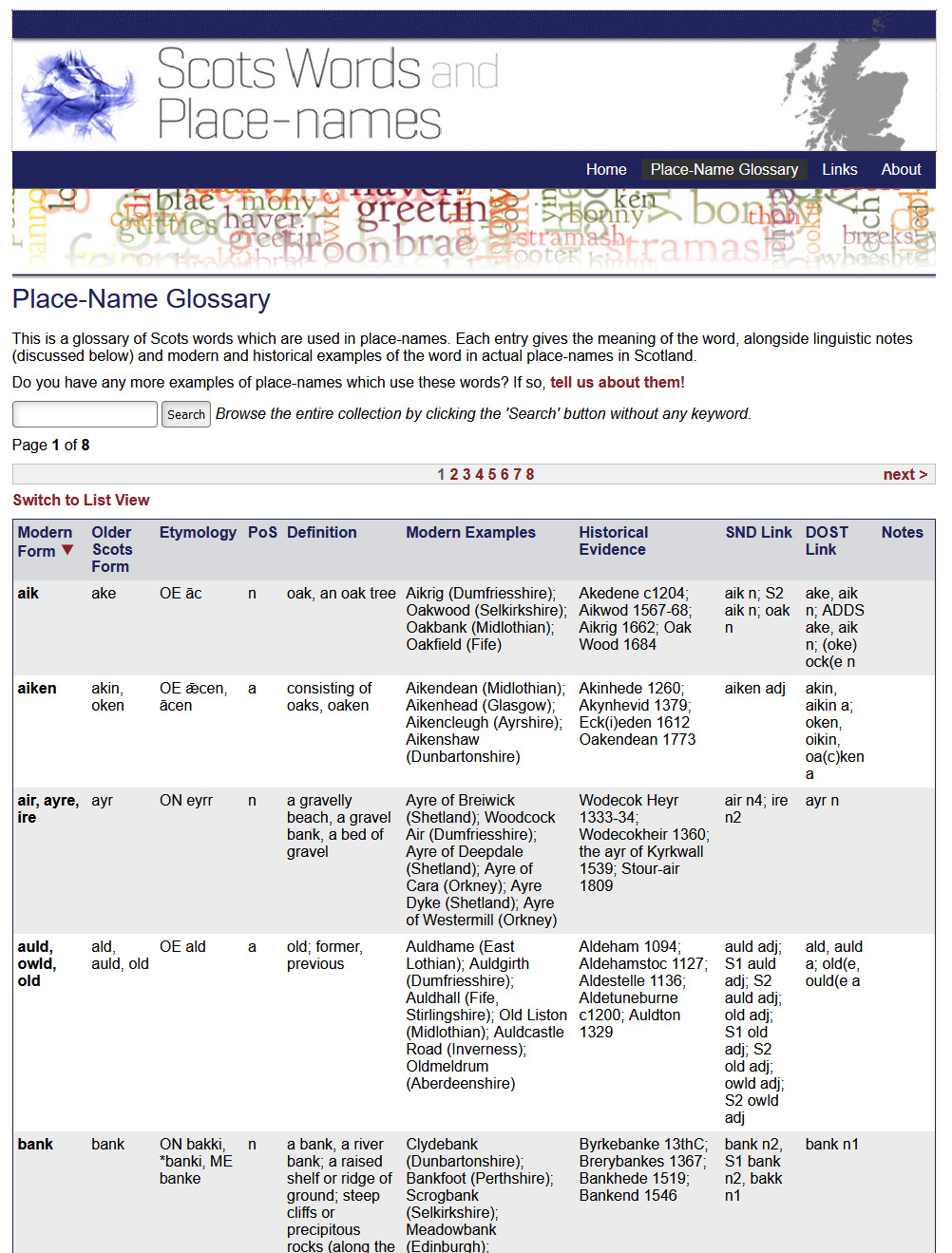 SWAP used social media to investigate language use in Scotland. Traditional means of data collection, such as interviews and questionnaires, are inefficient, while results disseminated through expensive publications reach a limited audience. The problems are particularly acute for a language such as Scots, which has no standard written form and a range of regional varieties, and which until recently was accorded lower status than its close relative English. Instead, SWAP used integrated online community engagement methods to provide a framework for the public to access existing research into Scots, and to contribute their own local knowledge to ongoing research.

The project sought any examples of words, their meanings, how they were used and where they were used. The project also wanted to know about the names of places which use Scots words: how they were pronounced; if people knew what they meant; whether they appeared on maps or were known through word-of-mouth; even how they looked (through uploading pictures).

The results of the SWAP project were added to the word collections of Scottish Language Dictionaries and helped to form new dictionaries of the Scots language. They also contributed to our knowledge of Scots place-names. The information we gathered on place-names was used to populate a comprehensive glossary of Scots place-name elements and to supplement the dictionary-based research which was used to create it.