The Metaphor Map of English shows the metaphorical links which have been identified between different areas of meaning. These links can be from the Anglo-Saxon period right up to the present day so the map covers 1300 years of the English language. Find out more
The resource provides ultrasound tongue imaging (UTI) and lip video of speech, magnetic resonance imaging (MRI) video of speech, and 2D midsagittal head animations based on MRI and UTI data. Find out more
A publicly accessible, online scholarly edition of one of the most important archives of eighteenth-century medical "consultation letters", containing more than 20,000 digitised pages. Find out more
The online catalogue includes some 550 oil paintings and over 1700 works on paper dating from ca 1850 to 1903. The evolution of each painting from sketch to final oil is described and illustrated. Find out more
The University of Glasgow’s Historical Thesaurus of English is a unique resource charting the development of meaning in the huge and varied vocabulary of English. It consists of almost every recorded word in English from Anglo-Saxon times to the present day, all arranged into detailed hierarchies of meaning. Find out more
Bess of Hardwick's Letters brings together, for the first time, the remarkable letters written to and from Bess of Hardwick (c.1521/2 or 1527-1608), one of Elizabethan England's most famous figures. Find out more
James McNeill Whistler (1834-1903) was a major figure in 19th century printmaking and created 490 etchings. Over 9500 impressions of these prints have been located and investigated during the project, which completes a series of catalogues raisonnés of Whistler's oeuvre. Find out more
A database of all known people of Scotland between 1093 and 1314 mentioned in over 8600 contemporary documents. It is also being extended to 1371 to include all those lands, peoples and relationships mentioned in royal charters between 1314 and 1371. Find out more
The Digital Catalogue documents, visually and textually, the first ten years of Andy Goldsworthy's ephemeral, outdoor practice. It replicates Goldsworthy's Slide Cabinet Index, and includes previously unpublished material from Goldsworthy's Sketchbook Diaries. Find out more
The resource includes historical research for all Berwickshire place-names on the Ordnance Survey 1:50,000 Landranger map, including more than 1,600 place-names and 7,000 historical forms presented via a series of interactive maps. Find out more
project

Alciato at Glasgow gives access to twenty-two editions of the emblems of Andrea Alciato (1492-1550), the pater et princeps of the emblem genre. The editions date from 1531 to 1621, in the original Latin, and in French, German, Italian, and Spanish versions. 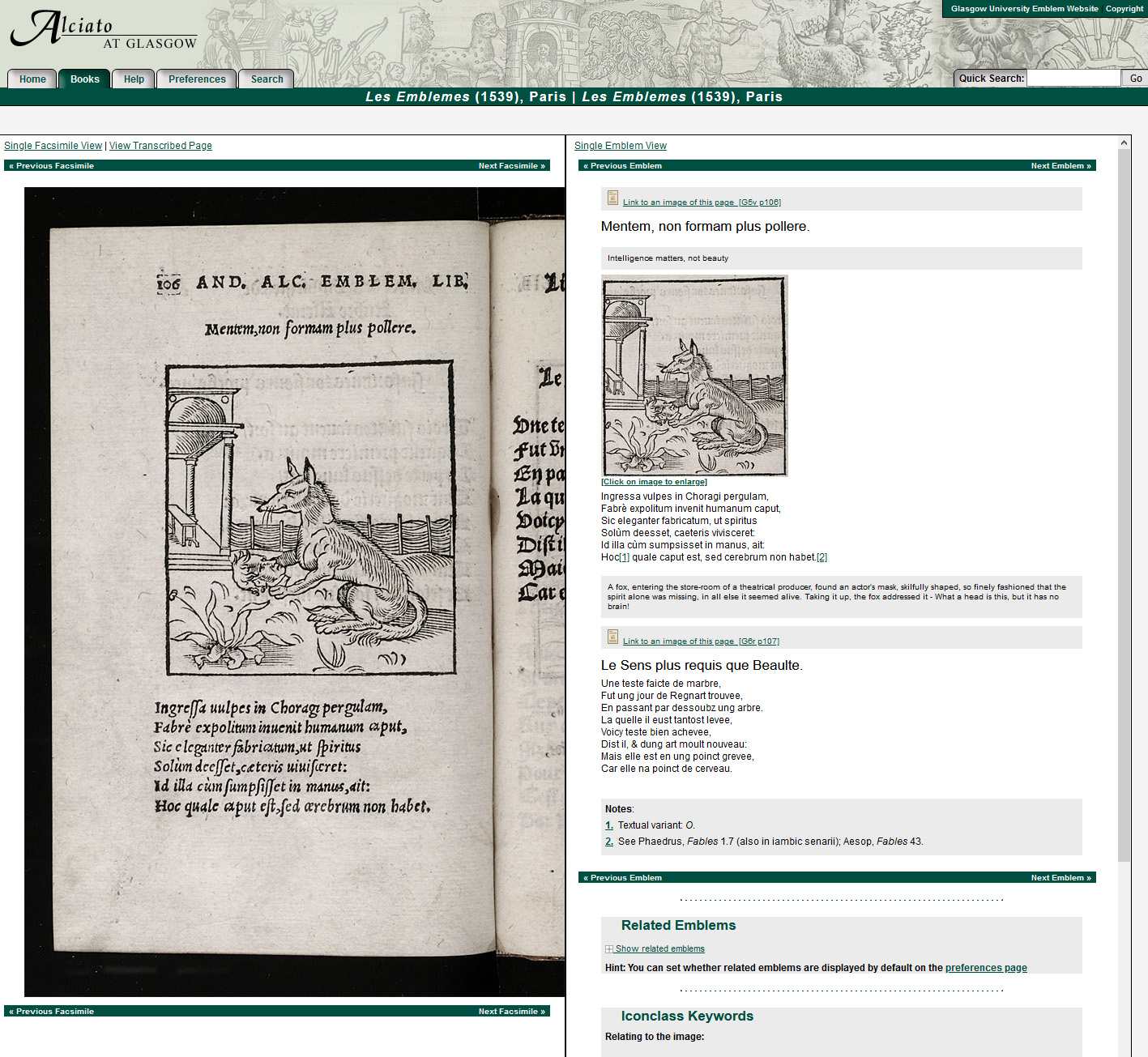 An emblem page, showing the digitised image on the left and transcribed text on the right

The site was developed as an extension of the earlier French Emblems at Glasgow site, which was funded by the Arts and Humanities Research Council under the Resource Enhancement Scheme. The Alciato site has benefitted from generous funding from the British Academy. All books digitised are from the Stirling Maxwell Collection in Glasgow University Library.  Four of the Alciato editions also feature on the French Emblems at Glasgow site; the Italian edition of 1551, also features on the The Study and Digitisation of Italian Emblems website, also based in the University of Glasgow. The Project is undertaken within the OpenEmblem initiative.  There are 22 browsable emblem books, in which the original Alciato texts are available in both transcribed and facsimile versions, although the longer, non-authorial commentaries of 1591, 1615, and 1621 are available only in facsimile. Apart from its index, the paratextual material of the 1621 edition, has not been transcribed. Extensive search functionality is provided and emblem images and text have been categorised using the Iconclass classification system for art and iconography.