Bess of Hardwick's Letters brings together, for the first time, the remarkable letters written to and from Bess of Hardwick (c.1521/2 or 1527-1608), one of Elizabethan England's most famous figures. Find out more
The project explores Romantic-period accounts of journeys into Wales and Scotland with a focus on the writings of the Flintshire naturalist and antiquarian Thomas Pennant (1726-1798), whose published Tours of both countries did so much to awaken public interest in the ‘peripheries’ of Britain. Find out more
A publicly accessible, online scholarly edition of one of the most important archives of eighteenth-century medical "consultation letters", containing more than 20,000 digitised pages. Find out more
As told by some of Scotland's best writers, and illustrated with thousands of images from the collections of the city's world-famous libraries, museums and universities. From football to fashions, Auchenshuggle to Yoker, you'll find it all here. Find out more
The Scots Syntax Atlas presents the results of over 100,000+ acceptability judgments from over 500 speakers on over 250 morphosyntactic phenomena. The Atlas also contains a text-to-sound aligned corpus of spoken data totalling 275 hours and over 3 million words. Find out more
The Scottish Corpora project has created large electronic corpora of written and spoken texts for the languages of Scotland, featuring nearly 4.6 million words of text, with audio recordings to accompany many of the spoken texts. Find out more
The online catalogue includes some 550 oil paintings and over 1700 works on paper dating from ca 1850 to 1903. The evolution of each painting from sketch to final oil is described and illustrated. Find out more
The resource includes historical research for all Berwickshire place-names on the Ordnance Survey 1:50,000 Landranger map, including more than 1,600 place-names and 7,000 historical forms presented via a series of interactive maps. Find out more
The Digital Catalogue documents, visually and textually, the first ten years of Andy Goldsworthy's ephemeral, outdoor practice. It replicates Goldsworthy's Slide Cabinet Index, and includes previously unpublished material from Goldsworthy's Sketchbook Diaries. Find out more
The University of Glasgow’s Historical Thesaurus of English is a unique resource charting the development of meaning in the huge and varied vocabulary of English. It consists of almost every recorded word in English from Anglo-Saxon times to the present day, all arranged into detailed hierarchies of meaning. Find out more
project

The Project has prepared a comprehensive edition of the nearly 10,000 letters to and from William Henry Fox Talbot (1800-1877), the Wiltshire polymath best known for his invention of photography. 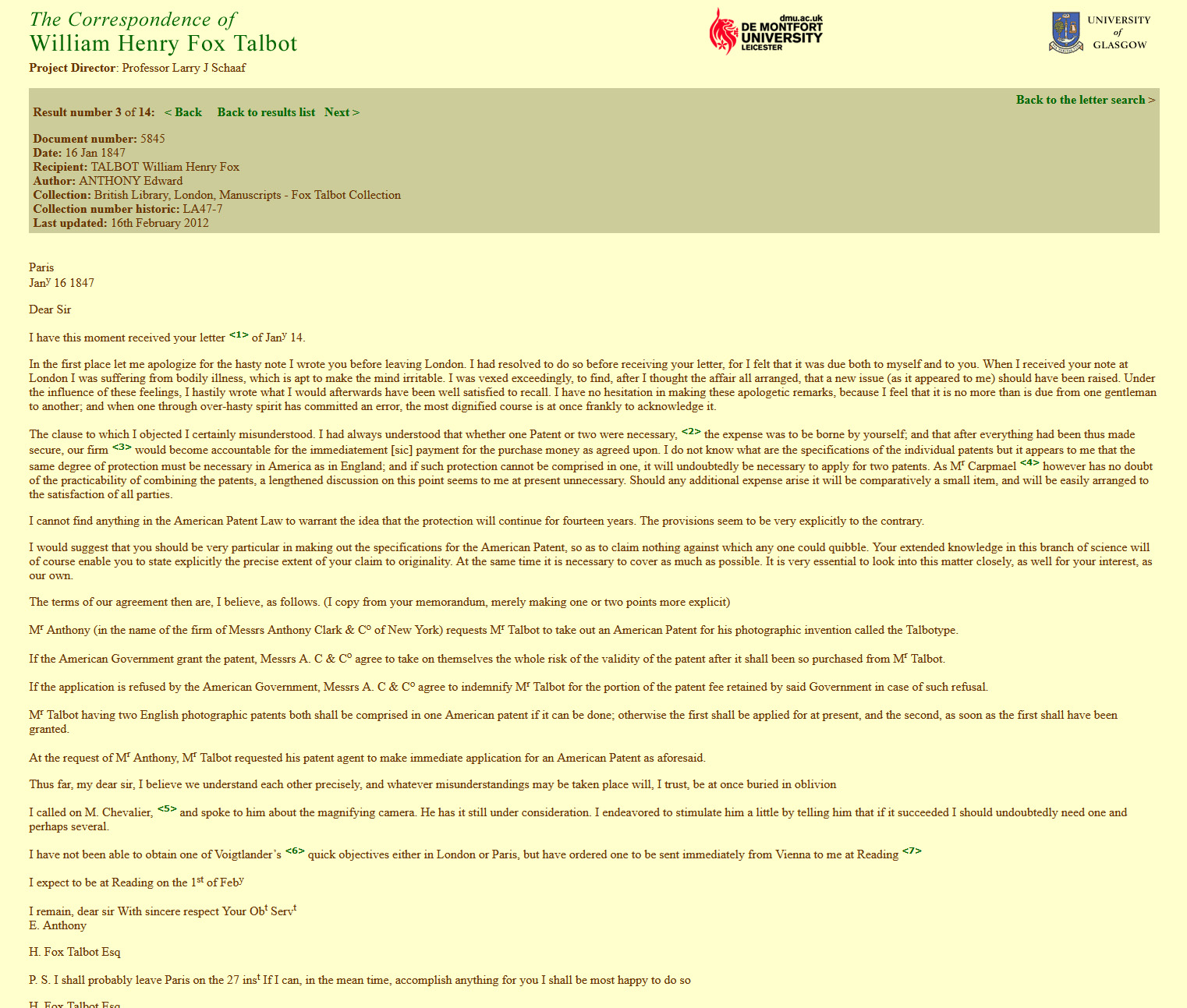 Correspondence from Talbot to Edward Anthony

The Correspondence of William Henry Fox Talbot Project has prepared a comprehensive edition of the nearly 10,000 letters to and from Talbot (1800-1877), the Wiltshire polymath best known for his invention of photography.  The conception and editorial foundations of the project took place at the University of Glasgow between 1999 and 2004. Additional development and hosting is now undertaken by Knowledge Media Design, De Montfort University. The Correspondence editor is Professor Larry Schaaf.

The present project builds on thirty years of efforts by the project director, Dr Larry J Schaaf. These include extensive tracing of archives, cataloguing of visual productions, selective transcription of Talbot's research notes and letters and the assessment of the importance of Talbot's achievements. In 1989, Schaaf was hired to catalogue the Talbot family's 1934 bequest to the Science Museum, housed at the NMPFT in Bradford. By far the largest collection of Talbot's early photographs, this archive also preserves significant scientific correspondence and Talbot's research notes. The immediate foundations of the present project were established in 1992 by a National Endowment for the Humanities (USA) grant to Schaaf. This facilitated the first computer-based calendar of the Talbot family's collection of correspondence preserved at Lacock. The calendar grew rapidly with the addition of outgoing Talbot letters held in collections worldwide. Various aspects of the project have been supported in several steps since this start. In 1993, a fellowship at the National Gallery of Canada presented the opportunity to obtain and evaluate scholarly translations of particular letters (approximately 5% of the letters are not in English). Also in that year, an NEH Special Opportunity grant permitted an emergency trip to Russia to examine an archive that had only recently surfaced (and is now once again inaccessible). In 1995, a full-year NEH Fellowship to Schaaf supported an in-depth study of some of the most complex and scientifically important letters. Beyond the immediate application to this body of letters, this fellowship permitted the development of a fuller understanding of the problems of a complete edition. A Preliminary Calendar of the letters was published in 1995 by Glasgow University. The then-Principal of Glasgow University, Professor Sir Graeme Davies, created a special Professorship for Schaaf in 1999 and the British Academy funded a one-year pilot study. Based on this, the Arts and Humanities Research Board gave a three-year grant to fund the project in the years 2000-2003. Glasgow University provided additional special funding for foreign language translations. In December 2005 the British Academy provided further funding to De Montfort University to create an additional interface that enables uploading of new content and editorial changes to be carried out remotely via the Web through an access controlled account. It is now a totally web-based project, hosted by De Montfort University.

One close model for the Talbot project was The Correspondence of Michael Faraday, edited by Dr. Frank A.J.L. James and published in print form. Faraday was a scientific friend of Talbot's and there are many parallels in their letters. Because of the broader scope of Talbot's interests and political connections, the notes for his letters will be somewhat more extensive than those required for Faraday. Some elements of the approach to the work of another of Talbot's contemporaries, that of The Correspondence of Charles Darwin (Cambridge University Press), have been adopted. However, this excellent work follows conventions established for literary manuscripts that are unnecessarily complex for the Talbot letters. A continuing model for the Talbot project is The Correspondence of James McNeill Whistler, based at Glasgow University. This electronically-based edition takes advantage of advanced technology to make the texts of the letters more fully searchable and cross-indexed.

The decision to publish full transcriptions in electronic form was reached after careful consideration of alternatives. The nature of the collections, the potential value of the contents of the letters, and the availability of new technology informed this choice. Because of the number of surviving letters, publication of a full print edition would run to many volumes and would be prohibitively expensive. Caution on selective editions must be taken from the many selective Victorian editions of letters. Their omissions have often severely limited later scholarship, especially in the not uncommon circumstance where the original correspondence has disappeared. Any choices we make today, however well informed or liberal, are just as likely to limit scholars in the future. A 'microfilm' (film or electronic) edition would permit full publication. However, it is the least suitable approach for this particular project. Neither electronic image files or film permit searching of the text. The history of photography is a relatively young field which has yet to develop a mature literature. It is hardly known what questions need to be asked, much less what the answers might be. Of equal importance is the fact that Talbot's correspondence covers many fields and interests and no amount of indexing could anticipate the needs of all of these. Variations in handwriting styles rule out optical character recognition. The effort required to carefully read and fully index an image-based edition would approach that required for a transcription edition. No matter how thoroughly done, it would not have the utility of fully searchable text files. A third approach considered was a combination of scanned images of the letters along with full transcriptions (on a limited scale, this was successfully used by Schaaf in the print edition: Records of the Dawn of Photography; Talbot's Notebooks P & Q). The total cost of the project would rise dramatically if scans of all of the pages had to be done. However, selective scanning will be used to convey sketches or other graphics in the letters. Inserted scans may also be applied in the very few cases where there are extensive mathematical notations. In cases where words or signatures are illegible or the interpretation of them uncertain, scans may supplement the transcription.

This project concentrates exclusively on Henry Talbot's correspondence, both incoming and outgoing. Publications in the form of letters to editors will be included, but research notes and drafts of published papers, often intermixed with the letters, will not. These are a different resource and pose very different kinds of transcription problems (but sections of these sources that prove relevant to understanding particular letters will be included in the notes). Since the content of the correspondence ranges across a wide variety of interests, all original letters written by Talbot will be included, including letters to outsiders and to members of his family. Surviving drafts will be recorded in the notes but transcribed in full only if the original letter is missing or if the draft varies significantly from the final letter. There are some letterpress copies and a few letters have appeared in print. These will be recorded in the notes and included in transcription only where the original letter is missing. All incoming original letters addressed to Talbot will be included. However, invoices, financial reports, and "mass mailings" such as meeting announcements and sales' circulars will generally be excluded. This type of material will be incorporated in the notes where appropriate, especially where they contribute to the chronology. Correspondence between other family members can provide valuable insights into Talbot's thinking and the nature of his outside contacts. They sometimes partially make up for lacunae in Talbot's surviving letters. However, these collections are so voluminous that they would overwhelm Talbot's own letters. They will be included as needed in the notes to his letters; where appropriate, they may be quoted from extensively or even in full.