The Metaphor Map of English shows the metaphorical links which have been identified between different areas of meaning. These links can be from the Anglo-Saxon period right up to the present day so the map covers 1300 years of the English language. Find out more
The resource provides ultrasound tongue imaging (UTI) and lip video of speech, magnetic resonance imaging (MRI) video of speech, and 2D midsagittal head animations based on MRI and UTI data. Find out more
Bess of Hardwick's Letters brings together, for the first time, the remarkable letters written to and from Bess of Hardwick (c.1521/2 or 1527-1608), one of Elizabethan England's most famous figures. Find out more
James McNeill Whistler (1834-1903) was a major figure in 19th century printmaking and created 490 etchings. Over 9500 impressions of these prints have been located and investigated during the project, which completes a series of catalogues raisonnés of Whistler's oeuvre. Find out more
The online catalogue includes some 550 oil paintings and over 1700 works on paper dating from ca 1850 to 1903. The evolution of each painting from sketch to final oil is described and illustrated. Find out more
The Scots Syntax Atlas presents the results of over 100,000+ acceptability judgments from over 500 speakers on over 250 morphosyntactic phenomena. The Atlas also contains a text-to-sound aligned corpus of spoken data totalling 275 hours and over 3 million words. Find out more
As told by some of Scotland's best writers, and illustrated with thousands of images from the collections of the city's world-famous libraries, museums and universities. From football to fashions, Auchenshuggle to Yoker, you'll find it all here. Find out more
A database of all known people of Scotland between 1093 and 1314 mentioned in over 8600 contemporary documents. It is also being extended to 1371 to include all those lands, peoples and relationships mentioned in royal charters between 1314 and 1371. Find out more
The project provides a richly-illustrated Catalogue of all known architectural projects by Charles Rennie Mackintosh, including over 1200 drawings by Mackintosh and the practice, analytical and contextual essays, a timeline and glossary. Find out more
The Digital Catalogue documents, visually and textually, the first ten years of Andy Goldsworthy's ephemeral, outdoor practice. It replicates Goldsworthy's Slide Cabinet Index, and includes previously unpublished material from Goldsworthy's Sketchbook Diaries. Find out more
project

A Thesaurus of Old English is conceptually arranged, and presents the vocabulary of Anglo-Saxon England within ordered categories.  It consists of more than 50,000 Old English words arranged into more than 22,000 categories. 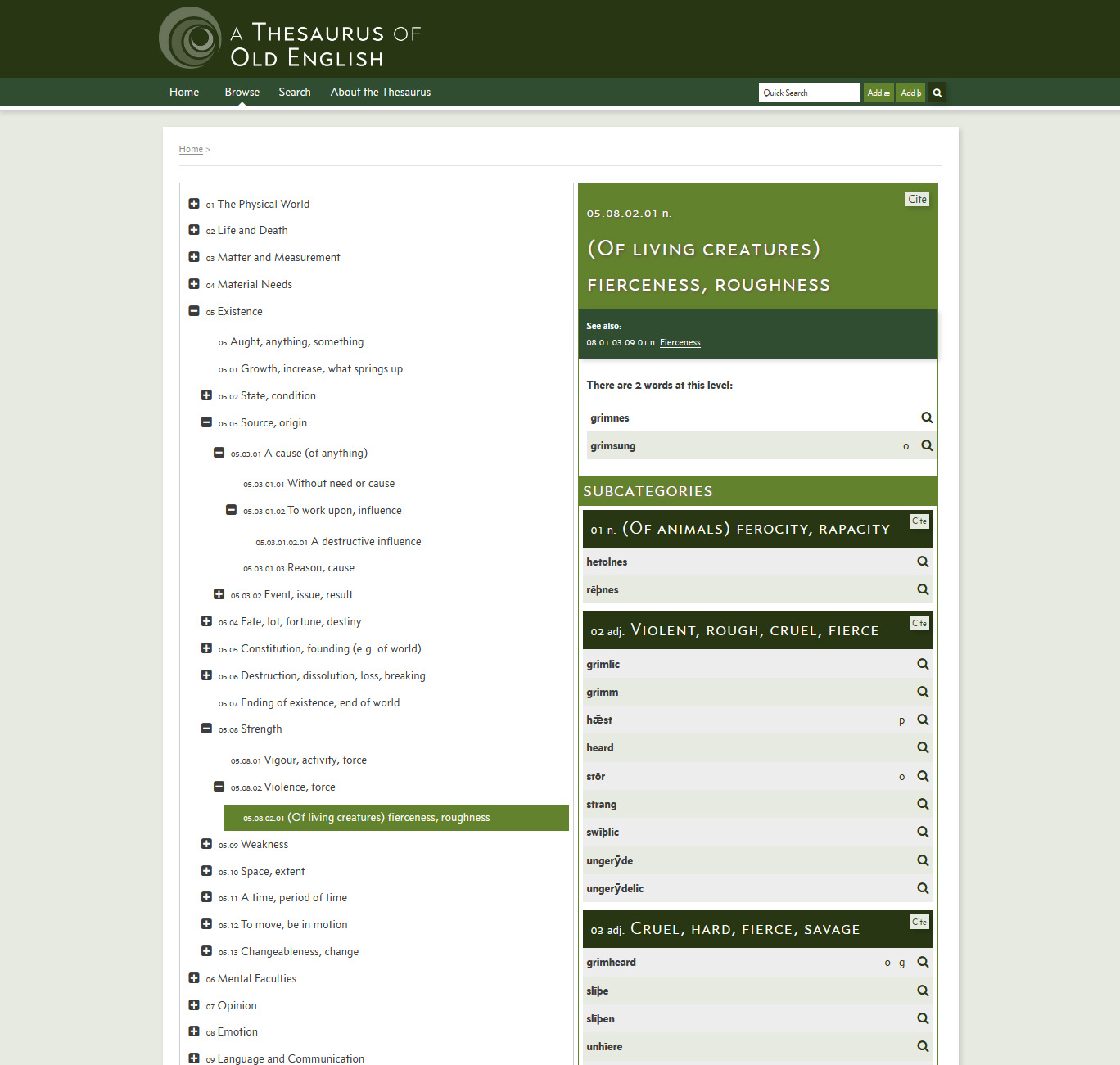 The category tree showing words in the category '(of living creatures) fierceness, roughness'

A Thesaurus of Old English is conceptually arranged, and presents the vocabulary of Anglo-Saxon England within ordered categories. This allows the user to approach the materials of the Thesaurus by subject rather than through an alphabetic index as is the case for many thesauri. The provision of brief indications of meaning at all levels of this scheme allows word-senses to follow on from ideas explained, so that this thesaurus incorporates information about word meaning and could be described as an inside-out dictionary, with meanings first and then words.

The Thesaurus is edited by Jane Roberts and Christian Kay with Lynne Grundy. This online version enables users to pinpoint the range of meanings of a word throughout its history, their synonyms, and their relationship to words of more general or more specific meaning. In addition to providing hitherto unavailable information for linguists, historians of language, authors, students of English, and textual scholars, A Thesaurus of Old English is a rich resource for investigating social and cultural history, showing the development of concepts through the words that refer to them.

Ideally, the reader should approach the materials of the TOE by subject rather than through the alphabetic index of the printed edition. Roget-owners have long been accustomed to begin with a word and, by trying a few locations listed in the index, find the vocabulary group wanted. Moreover, for inclusiveness they trade detailed information. Should a word's precise meaning be wanted, a dictionary is needed. Most conceptually-organized thesauri tend therefore to be used by native speakers of a language, who know the meanings of the words scanned. Less assured speakers may turn to those alphabetically-organized thesauri where they will find more help with meaning but far fewer words. In the TOE any small group of items listed together as sharing a component of meaning resembles the strings of words that make up the entries of an alphabetically-organized thesaurus, but they are embedded within an inclusive conceptual scheme. The provision of brief indications of meaning at all levels of this scheme looks back behind Roget, to the way in which Wilkins supplies notions and words, where word-senses follow on from ideas explained. Thus, this thesaurus incorporates information about word meaning and could be described as an inside-out dictionary, with meanings first and then words.

For the contents of the TOE dictionaries have indeed been turned inside out, a task initially undertaken to supply the editors of the Historical Thesaurus (HT) both with some idea of the range of Old English vocabulary not to be found in the Oxford English Dictionary (OED) and with a body of materials from which a pilot thesaurus could be made. The standard Old English dictionaries contain vocabulary for over five hundred years of the history of the language: little probably from the eighth century, much more from the ninth century, more again from the turn of the tenth century, and most from the eleventh and twelfth centuries. Because the OED generally omits those words that had dropped out of use by 1150, the TOE provides a complementary overview of the earliest vocabulary of English. The vocabulary is drawn essentially from pre-Norman England, the slips used in its compilation representing the work of generations of Anglo-Saxon scholarship. Within the wider context of the HT, it is useful that the TOE's contents trickle over into the twelfth century and sometimes beyond. With the completion of the HT, correspondences between the OED-derived word senses and the independently excerpted Old English were matched, and it was possible then both to accept all Old English slips matched up with OED-derived slips as validated and for the first time to assess the range of early English vocabulary altogether omitted from the OED.