The project provides a richly-illustrated Catalogue of all known architectural projects by Charles Rennie Mackintosh, including over 1200 drawings by Mackintosh and the practice, analytical and contextual essays, a timeline and glossary. Find out more
The online catalogue includes some 550 oil paintings and over 1700 works on paper dating from ca 1850 to 1903. The evolution of each painting from sketch to final oil is described and illustrated. Find out more
A database of all known people of Scotland between 1093 and 1314 mentioned in over 8600 contemporary documents. It is also being extended to 1371 to include all those lands, peoples and relationships mentioned in royal charters between 1314 and 1371. Find out more
The Scottish Corpora project has created large electronic corpora of written and spoken texts for the languages of Scotland, featuring nearly 4.6 million words of text, with audio recordings to accompany many of the spoken texts. Find out more
A publicly accessible, online scholarly edition of one of the most important archives of eighteenth-century medical "consultation letters", containing more than 20,000 digitised pages. Find out more
The resource provides ultrasound tongue imaging (UTI) and lip video of speech, magnetic resonance imaging (MRI) video of speech, and 2D midsagittal head animations based on MRI and UTI data. Find out more
The Scots Syntax Atlas presents the results of over 100,000+ acceptability judgments from over 500 speakers on over 250 morphosyntactic phenomena. The Atlas also contains a text-to-sound aligned corpus of spoken data totalling 275 hours and over 3 million words. Find out more
The project explores Romantic-period accounts of journeys into Wales and Scotland with a focus on the writings of the Flintshire naturalist and antiquarian Thomas Pennant (1726-1798), whose published Tours of both countries did so much to awaken public interest in the ‘peripheries’ of Britain. Find out more
As told by some of Scotland's best writers, and illustrated with thousands of images from the collections of the city's world-famous libraries, museums and universities. From football to fashions, Auchenshuggle to Yoker, you'll find it all here. Find out more
The Digital Catalogue documents, visually and textually, the first ten years of Andy Goldsworthy's ephemeral, outdoor practice. It replicates Goldsworthy's Slide Cabinet Index, and includes previously unpublished material from Goldsworthy's Sketchbook Diaries. Find out more
project

The project gives you access to all the French Emblem Books of the 16th century, along with their Latin versions when appropriate. A total of 28 emblem books are available in both transcribed and facsimile versions. 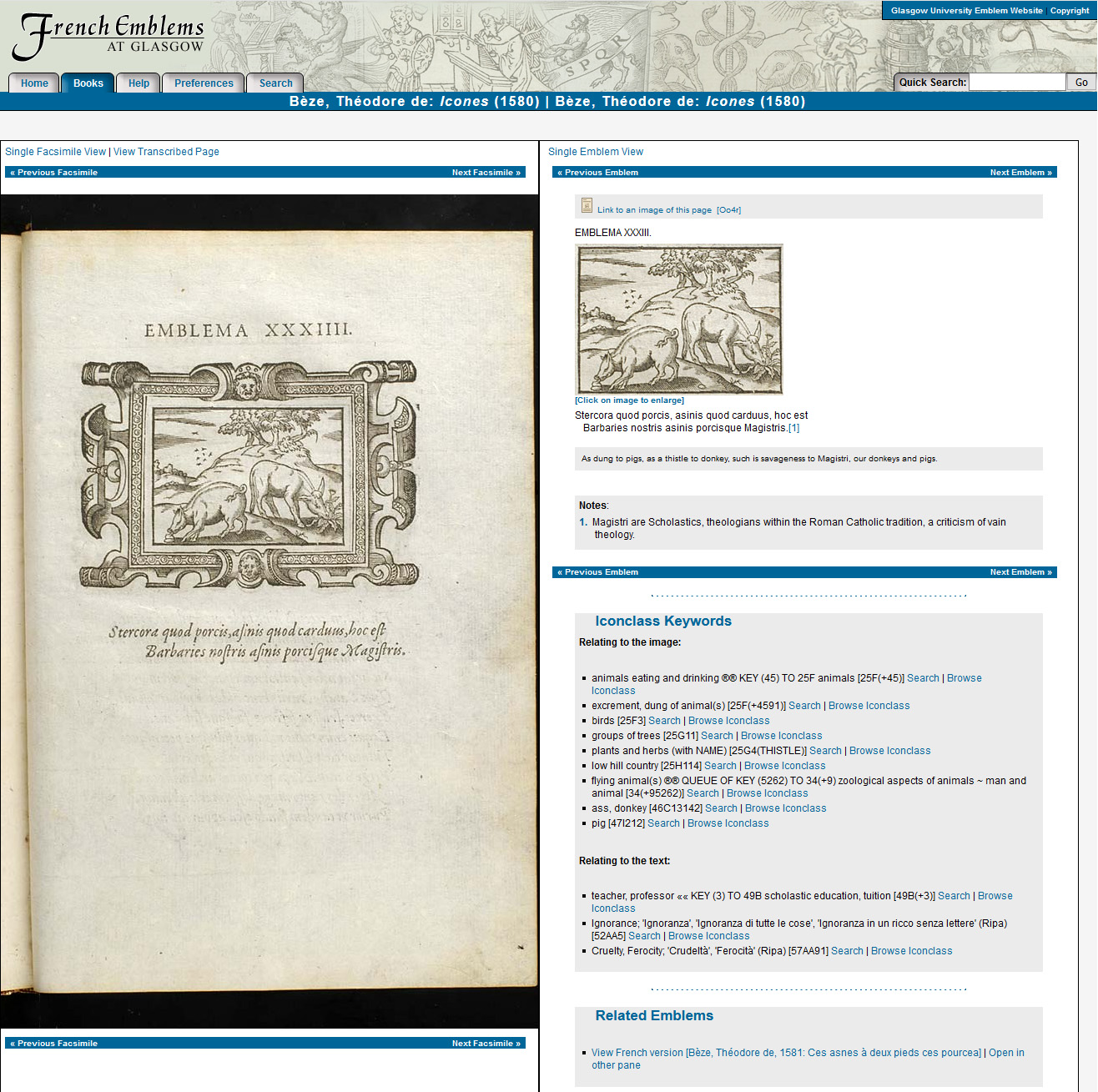 An emblem page, showing the digitised image on the left and transcribed text on the right

While the seed of the emblem as a genre was sown in Germany in 1531, it flowered and developed in France during the 16th century, and it was from there that it spread throughout Europe.  The site has been developed, with generous funding from the Arts and Humanities Research Council under the Resource Enhancement Scheme, by a team led by Post-Doctoral Research Assistant Jonathan Spangler, and Project Director Alison Adams. All but two of the emblem books digitised are from the Stirling Maxwell Collection in Glasgow University Library. The Bodleian Library and the Bibliothèque Mazarine have generously made material available to enable us to present the complete corpus.

Each emblem has been keyed and marked using XML in various ways to allow maximum readability and searchability. Most of these won't be seen on the page, but work behind the scenes in the search process. Most of the text has been keyed in a direct manner, with no changes, but we have systematically made a few emendations.  A facsimile view of each page is also available.  The transcribed page also offers several extra elements to help comprehend the emblem: all Latin mottoes and primary (mostly verse) texts have been translated into English, as have secondary texts when no vernacular version is available; and most emblems are accompanied by annotations made by various scholars affiliated with this project. Extensive search functionality is provided and emblem images and text have been categorised using the Iconclass classification system for art and iconography.