The Digital Catalogue documents, visually and textually, the first ten years of Andy Goldsworthy's ephemeral, outdoor practice. It replicates Goldsworthy's Slide Cabinet Index, and includes previously unpublished material from Goldsworthy's Sketchbook Diaries. Find out more
Bess of Hardwick's Letters brings together, for the first time, the remarkable letters written to and from Bess of Hardwick (c.1521/2 or 1527-1608), one of Elizabethan England's most famous figures. Find out more
The Metaphor Map of English shows the metaphorical links which have been identified between different areas of meaning. These links can be from the Anglo-Saxon period right up to the present day so the map covers 1300 years of the English language. Find out more
The Scottish Corpora project has created large electronic corpora of written and spoken texts for the languages of Scotland, featuring nearly 4.6 million words of text, with audio recordings to accompany many of the spoken texts. Find out more
The project explores Romantic-period accounts of journeys into Wales and Scotland with a focus on the writings of the Flintshire naturalist and antiquarian Thomas Pennant (1726-1798), whose published Tours of both countries did so much to awaken public interest in the ‘peripheries’ of Britain. Find out more
A publicly accessible, online scholarly edition of one of the most important archives of eighteenth-century medical "consultation letters", containing more than 20,000 digitised pages. Find out more
The project provides a richly-illustrated Catalogue of all known architectural projects by Charles Rennie Mackintosh, including over 1200 drawings by Mackintosh and the practice, analytical and contextual essays, a timeline and glossary. Find out more
The online catalogue includes some 550 oil paintings and over 1700 works on paper dating from ca 1850 to 1903. The evolution of each painting from sketch to final oil is described and illustrated. Find out more
James McNeill Whistler (1834-1903) was a major figure in 19th century printmaking and created 490 etchings. Over 9500 impressions of these prints have been located and investigated during the project, which completes a series of catalogues raisonnés of Whistler's oeuvre. Find out more
The University of Glasgow’s Historical Thesaurus of English is a unique resource charting the development of meaning in the huge and varied vocabulary of English. It consists of almost every recorded word in English from Anglo-Saxon times to the present day, all arranged into detailed hierarchies of meaning. Find out more
project

The Digital Archive of Scottish Gaelic is the University of Glasgow's online repository of digitised texts, lexical resources and audio recordings for Scottish Gaelic. 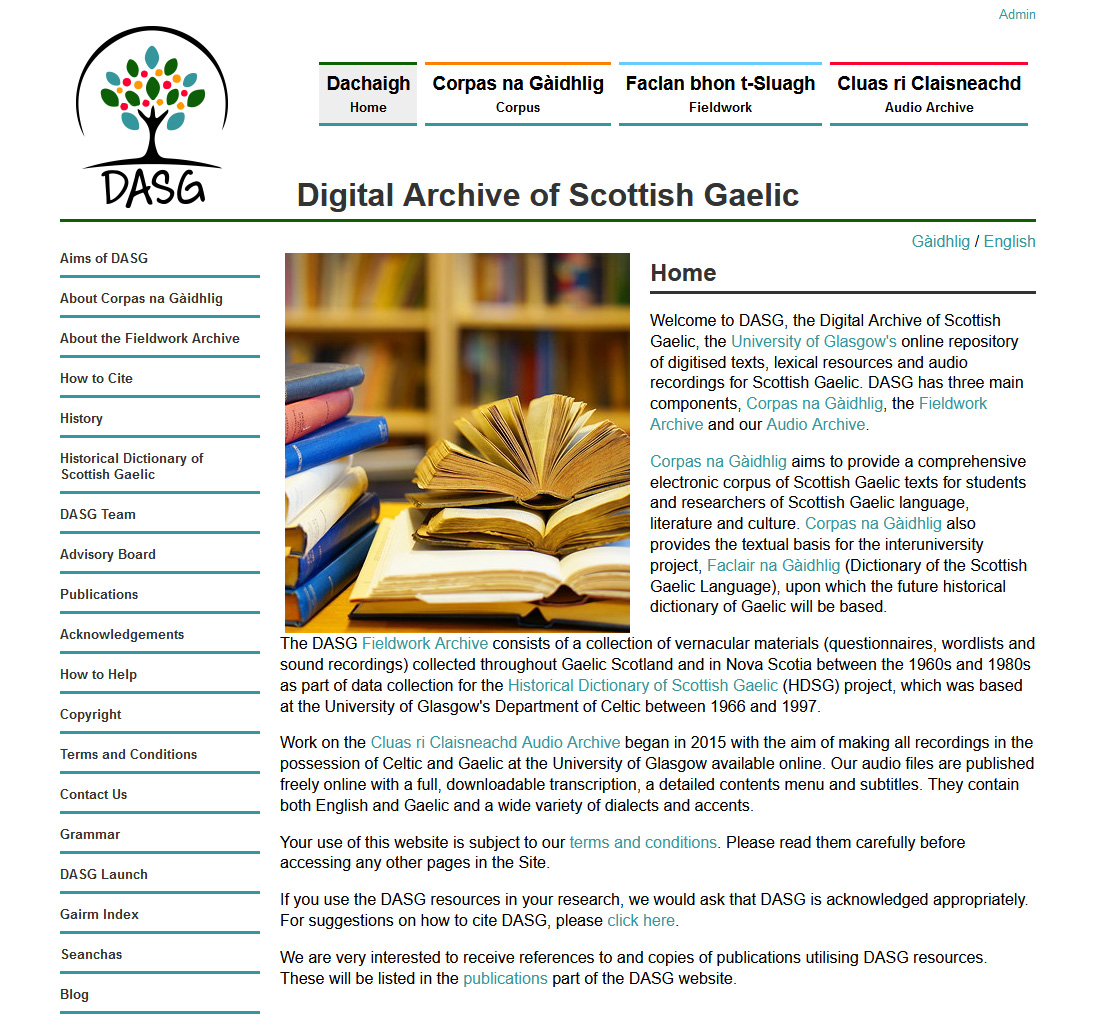 DASG has three main components, Corpas na Gàidhlig, the Fieldwork Archive and our Audio Archive. Corpas na Gàidhlig aims to provide a comprehensive electronic corpus of Scottish Gaelic texts for students and researchers of Scottish Gaelic language, literature and culture. Corpas na Gàidhlig also provides the textual basis for the interuniversity project, Faclair na Gàidhlig (Dictionary of the Scottish Gaelic Language), upon which the future historical dictionary of Gaelic will be based. The DASG Fieldwork Archive consists of a collection of vernacular materials (questionnaires, wordlists and sound recordings) collected throughout Gaelic Scotland and in Nova Scotia between the 1960s and 1980s as part of data collection for the Historical Dictionary of Scottish Gaelic (HDSG) project, which was based at the University of Glasgow's Department of Celtic between 1966 and 1997. Work on the Cluas ri Claisneachd Audio Archive began in 2015 with the aim of making all recordings in the possession of Celtic and Gaelic at the University of Glasgow available online. Our audio files are published freely online with a full, downloadable transcription, a detailed contents menu and subtitles. They contain both English and Gaelic and a wide variety of dialects and accents.

The project was established by Professor Roibeard Ó Maolalaigh in 2006 and is a recognised British Academy project based within Celtic and Gaelic in the School of Humanities at the University of Glasgow. It was founded in order to digitise valuable parts of the archive generated by the Historical Dictionary of Scottish Gaelic (HDSG), which was established within the then Department of Celtic, University of Glasgow (1966–97). The first stage of work concentrated on digitising the Fieldwork Archive. This task was undertaken between 2008 and 2014 by Olga Szczesnowicz, who captured the data in Word and ASCII files. These in turn were transferred to XML by Wojtek Dziejma, Stephen Barrett and Dr Mark McConville. The sound recordings associated with the Fieldwork Archive were digitised by Uist Digitisation Centre in 2011. These will be made available in due course.

Corpas na Gàidhlig was established in 2008 as a constituent project of DASG. It was founded in order to create a comprehensive electronic corpus of Scottish Gaelic texts for students and researchers of Scottish Gaelic language, literature and culture; and as a resource which would facilitate corpus planning and corpus development technology for Gaelic. The Corpus will provide the textual basis for the interuniversity project Faclair na Gàidhlig (‘Dictionary of the Scottish Gaelic Language’).