The project explores Romantic-period accounts of journeys into Wales and Scotland with a focus on the writings of the Flintshire naturalist and antiquarian Thomas Pennant (1726-1798), whose published Tours of both countries did so much to awaken public interest in the ‘peripheries’ of Britain. Find out more
The University of Glasgow’s Historical Thesaurus of English is a unique resource charting the development of meaning in the huge and varied vocabulary of English. It consists of almost every recorded word in English from Anglo-Saxon times to the present day, all arranged into detailed hierarchies of meaning. Find out more
The Scots Syntax Atlas presents the results of over 100,000+ acceptability judgments from over 500 speakers on over 250 morphosyntactic phenomena. The Atlas also contains a text-to-sound aligned corpus of spoken data totalling 275 hours and over 3 million words. Find out more
The resource includes historical research for all Berwickshire place-names on the Ordnance Survey 1:50,000 Landranger map, including more than 1,600 place-names and 7,000 historical forms presented via a series of interactive maps. Find out more
Bess of Hardwick's Letters brings together, for the first time, the remarkable letters written to and from Bess of Hardwick (c.1521/2 or 1527-1608), one of Elizabethan England's most famous figures. Find out more
The online catalogue includes some 550 oil paintings and over 1700 works on paper dating from ca 1850 to 1903. The evolution of each painting from sketch to final oil is described and illustrated. Find out more
The project provides a richly-illustrated Catalogue of all known architectural projects by Charles Rennie Mackintosh, including over 1200 drawings by Mackintosh and the practice, analytical and contextual essays, a timeline and glossary. Find out more
The resource provides ultrasound tongue imaging (UTI) and lip video of speech, magnetic resonance imaging (MRI) video of speech, and 2D midsagittal head animations based on MRI and UTI data. Find out more
A database of all known people of Scotland between 1093 and 1314 mentioned in over 8600 contemporary documents. It is also being extended to 1371 to include all those lands, peoples and relationships mentioned in royal charters between 1314 and 1371. Find out more
The Digital Catalogue documents, visually and textually, the first ten years of Andy Goldsworthy's ephemeral, outdoor practice. It replicates Goldsworthy's Slide Cabinet Index, and includes previously unpublished material from Goldsworthy's Sketchbook Diaries. Find out more
project

The Gentle Shepherd was first published in 1725, going on to become Allan Ramsay’s most celebrated work.  This site provides details of the major performances from 1729 up to the present day. 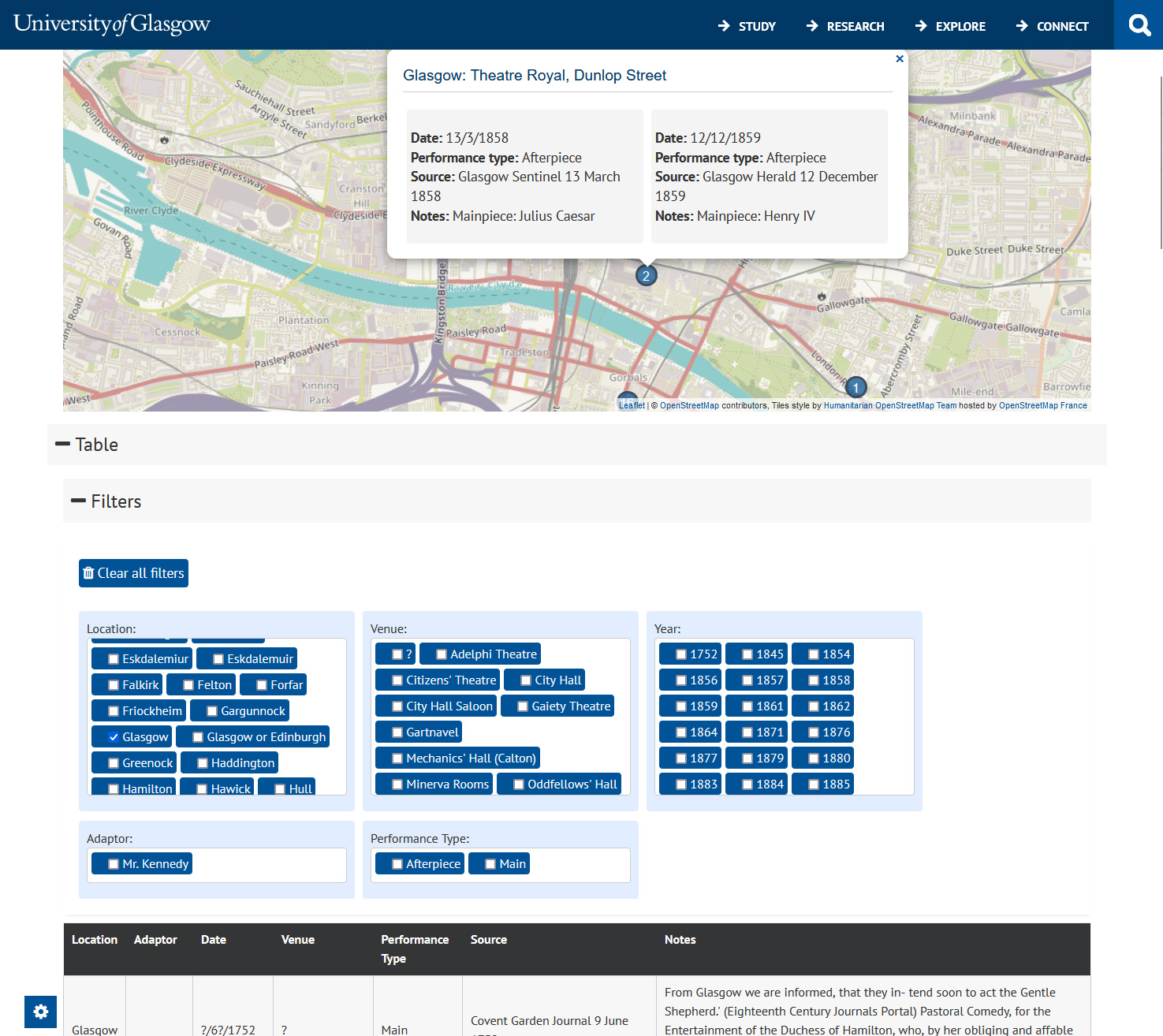 As part of the AHRC funded Collected Works of Allan Ramsay project the team behind the new Edition is conducting research into the reception of Allan Ramsay (1684-1758), considering how Ramsay has been remembered, celebrated, commemorated, and generally received since his death.  This includes a database of the performances of The Gentle Shepherd, Ramsay’s most celebrated work.  Research to date has shown that The Gentle Shepherd was a truly global phenomenon, beginning with the first performance in Edinburgh in January 1729. It was hugely popular in London before reaching the United States of America in the 1780s. By the next century there were performances in Australia. Edinburgh theatres would often advertise it as ‘The National Pastoral.’ The database currently features details of almost 700 performances from across the globe, dating from 1729 to 2018.  Performance data can be browsed via a timeline, an interactive map or via a table that provides numerous filter options.  The resource also includes several essays that discuss significant performances of the work.