James McNeill Whistler (1834-1903) was a major figure in 19th century printmaking and created 490 etchings. Over 9500 impressions of these prints have been located and investigated during the project, which completes a series of catalogues raisonnés of Whistler's oeuvre. Find out more
The Scots Syntax Atlas presents the results of over 100,000+ acceptability judgments from over 500 speakers on over 250 morphosyntactic phenomena. The Atlas also contains a text-to-sound aligned corpus of spoken data totalling 275 hours and over 3 million words. Find out more
A publicly accessible, online scholarly edition of one of the most important archives of eighteenth-century medical "consultation letters", containing more than 20,000 digitised pages. Find out more
The Metaphor Map of English shows the metaphorical links which have been identified between different areas of meaning. These links can be from the Anglo-Saxon period right up to the present day so the map covers 1300 years of the English language. Find out more
Bess of Hardwick's Letters brings together, for the first time, the remarkable letters written to and from Bess of Hardwick (c.1521/2 or 1527-1608), one of Elizabethan England's most famous figures. Find out more
The resource includes historical research for all Berwickshire place-names on the Ordnance Survey 1:50,000 Landranger map, including more than 1,600 place-names and 7,000 historical forms presented via a series of interactive maps. Find out more
The Scottish Corpora project has created large electronic corpora of written and spoken texts for the languages of Scotland, featuring nearly 4.6 million words of text, with audio recordings to accompany many of the spoken texts. Find out more
The online catalogue includes some 550 oil paintings and over 1700 works on paper dating from ca 1850 to 1903. The evolution of each painting from sketch to final oil is described and illustrated. Find out more
As told by some of Scotland's best writers, and illustrated with thousands of images from the collections of the city's world-famous libraries, museums and universities. From football to fashions, Auchenshuggle to Yoker, you'll find it all here. Find out more
The University of Glasgow’s Historical Thesaurus of English is a unique resource charting the development of meaning in the huge and varied vocabulary of English. It consists of almost every recorded word in English from Anglo-Saxon times to the present day, all arranged into detailed hierarchies of meaning. Find out more
project

A historical dictionary of Anglo-Norman French featuring more than 155,000 citations, fully dated and presented in chronological order per sense. 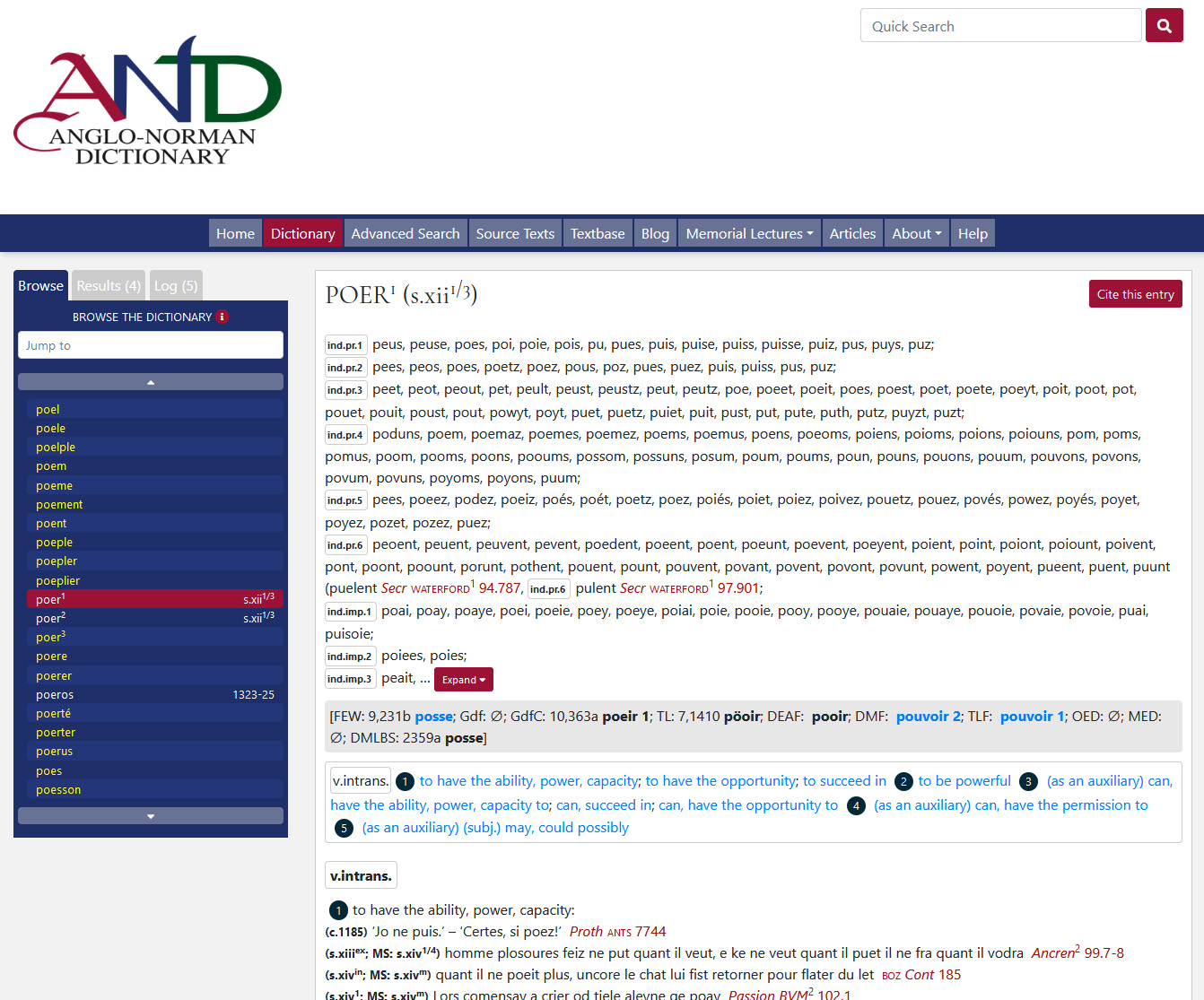 AND entry for 'Poer'

Anglo-Norman is the name usually given to the kind of French brought over to England by the conquerors in 1066, then later exported to Wales, Scotland and Ireland. Initially it shared most of its vocabulary, grammar, and pronunciation with the medieval French of the mainland. Later, it began to develop characteristics of its own.

Although Anglo-Norman became an acquired second language in later generations as Middle English emerged, it was still in use for complex administrative matters and affairs of state well into the 15th century. This site offers resources for understanding these records of Britain’s past.

The completely revised version of the AND website was launched in 2020. This new site, with all of its data migrated to a server hosted by the University of Glasgow, uses an updated and more user-friendly interface. It retains all of its original functionalities and adds new and exciting ones.  The website includes the dictionary itself and its full range of search options. A new chronological element (that will help to expand the AND into a full Historical Dictionary) has been introduced to form part of these various search options. Furthermore, all 155,000+ AND citations are now fully dated and presented in chronological order per (sub)sense. Several thousands of citations have been added to entries A-Q to provide the earliest attestation of a word. Note that the date of the earliest attestation is provided alongside each headword.

In conjunction with this, the fully revised AND2 entries of R- are now published for the first time.