A database of all known people of Scotland between 1093 and 1314 mentioned in over 8600 contemporary documents. It is also being extended to 1371 to include all those lands, peoples and relationships mentioned in royal charters between 1314 and 1371. Find out more
The project provides a richly-illustrated Catalogue of all known architectural projects by Charles Rennie Mackintosh, including over 1200 drawings by Mackintosh and the practice, analytical and contextual essays, a timeline and glossary. Find out more
The resource includes historical research for all Berwickshire place-names on the Ordnance Survey 1:50,000 Landranger map, including more than 1,600 place-names and 7,000 historical forms presented via a series of interactive maps. Find out more
The Scots Syntax Atlas presents the results of over 100,000+ acceptability judgments from over 500 speakers on over 250 morphosyntactic phenomena. The Atlas also contains a text-to-sound aligned corpus of spoken data totalling 275 hours and over 3 million words. Find out more
The Metaphor Map of English shows the metaphorical links which have been identified between different areas of meaning. These links can be from the Anglo-Saxon period right up to the present day so the map covers 1300 years of the English language. Find out more
The Digital Catalogue documents, visually and textually, the first ten years of Andy Goldsworthy's ephemeral, outdoor practice. It replicates Goldsworthy's Slide Cabinet Index, and includes previously unpublished material from Goldsworthy's Sketchbook Diaries. Find out more
James McNeill Whistler (1834-1903) was a major figure in 19th century printmaking and created 490 etchings. Over 9500 impressions of these prints have been located and investigated during the project, which completes a series of catalogues raisonnés of Whistler's oeuvre. Find out more
As told by some of Scotland's best writers, and illustrated with thousands of images from the collections of the city's world-famous libraries, museums and universities. From football to fashions, Auchenshuggle to Yoker, you'll find it all here. Find out more
The project explores Romantic-period accounts of journeys into Wales and Scotland with a focus on the writings of the Flintshire naturalist and antiquarian Thomas Pennant (1726-1798), whose published Tours of both countries did so much to awaken public interest in the ‘peripheries’ of Britain. Find out more
Bess of Hardwick's Letters brings together, for the first time, the remarkable letters written to and from Bess of Hardwick (c.1521/2 or 1527-1608), one of Elizabethan England's most famous figures. Find out more
project

This site allows users to work with images and data from the three registers that record student borrowings from Glasgow University Library during the period between March 1757 and January 1771. 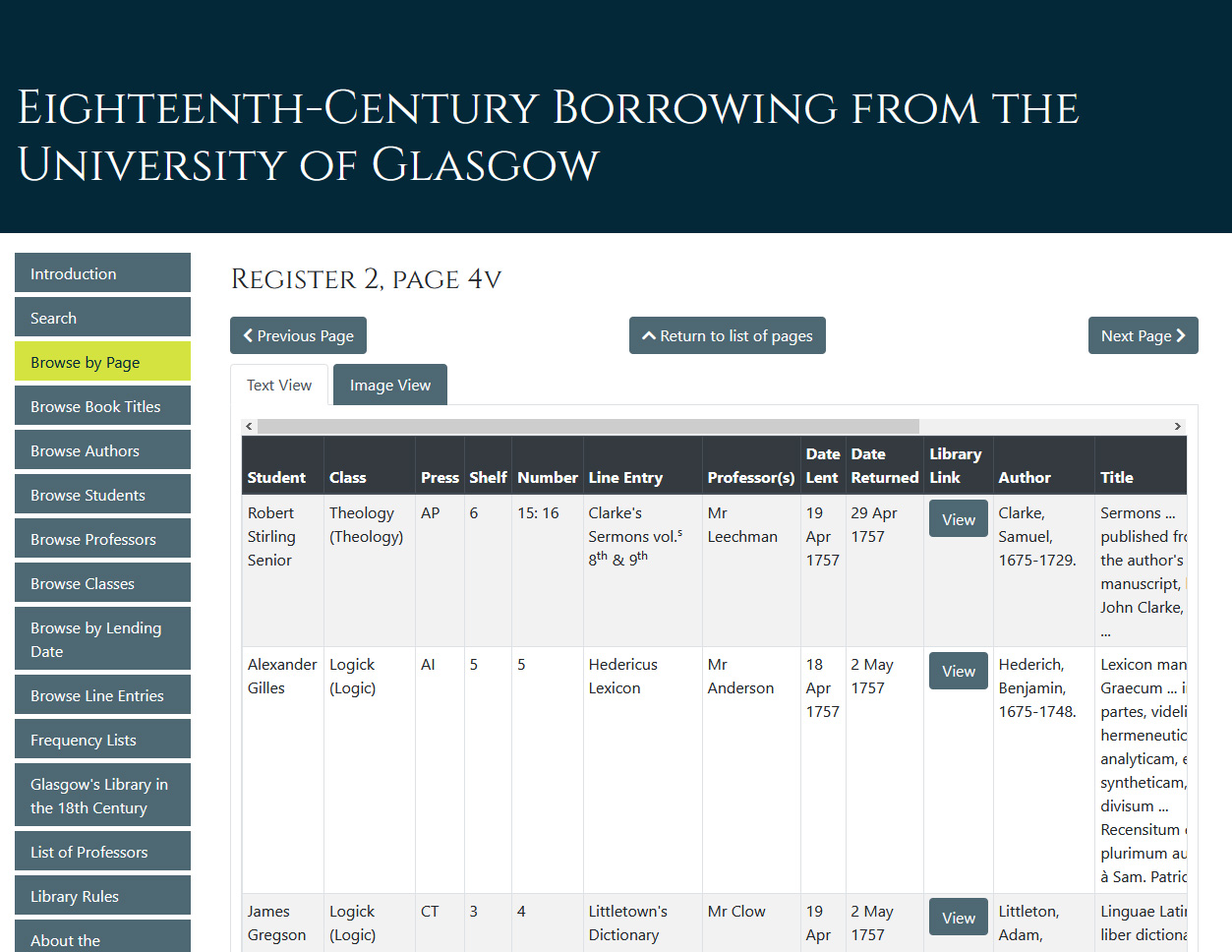 Browsing the records by page, showing page 4v of Regsiter 2

Histories of eighteenth-century book use have often relied on anecdotal accounts produced principally by elite auditors. This is not because other kinds of data have not survived, but because evidence is often immured in fragile, complex and inaccessible – but potentially immensely valuable – manuscript sources. Eighteenth-Century Borrowing at the University of Glasgow contributes to realising the potential of such sources by making openly available high-quality digital materials and rich, searchable data relating to book borrowings in the mid eighteenth century.

Archival library records at Glasgow are patchy, but for the eighteenth century, six registers detailing student borrowings and professorial loans have survived. This site allows users to work with images and data from the three registers that record student borrowings. These cover the period between March 1757 and January 1771.

The site provides a range of interfaces: you can search the data, controlling a number of parameters; browse the registers page by page; browse normalised book titles, author names and student names; examine the professors on whose authority books were taken out; consider borrowings by the classes in which students were enrolled; browse by lending dates; and glance through the unnormalised line entries as originally recorded in the registers. The most popular books and authors, and the most assiduous borrowers, can be seen using the frequency lists. In all cases, clicking through will take you to pages where you can tab between our transcribed data and high-resolution, zoomable images of the original manuscripts.

To help explain the borrowing records, we have provided some contextual information on the University library in the eighteenth century, as well as a list of the professors and a transcription of some of the library’s rules.