A publicly accessible, online scholarly edition of one of the most important archives of eighteenth-century medical "consultation letters", containing more than 20,000 digitised pages. Find out more
The project explores Romantic-period accounts of journeys into Wales and Scotland with a focus on the writings of the Flintshire naturalist and antiquarian Thomas Pennant (1726-1798), whose published Tours of both countries did so much to awaken public interest in the ‘peripheries’ of Britain. Find out more
As told by some of Scotland's best writers, and illustrated with thousands of images from the collections of the city's world-famous libraries, museums and universities. From football to fashions, Auchenshuggle to Yoker, you'll find it all here. Find out more
The Scottish Corpora project has created large electronic corpora of written and spoken texts for the languages of Scotland, featuring nearly 4.6 million words of text, with audio recordings to accompany many of the spoken texts. Find out more
A database of all known people of Scotland between 1093 and 1314 mentioned in over 8600 contemporary documents. It is also being extended to 1371 to include all those lands, peoples and relationships mentioned in royal charters between 1314 and 1371. Find out more
The Scots Syntax Atlas presents the results of over 100,000+ acceptability judgments from over 500 speakers on over 250 morphosyntactic phenomena. The Atlas also contains a text-to-sound aligned corpus of spoken data totalling 275 hours and over 3 million words. Find out more
The University of Glasgow’s Historical Thesaurus of English is a unique resource charting the development of meaning in the huge and varied vocabulary of English. It consists of almost every recorded word in English from Anglo-Saxon times to the present day, all arranged into detailed hierarchies of meaning. Find out more
The online catalogue includes some 550 oil paintings and over 1700 works on paper dating from ca 1850 to 1903. The evolution of each painting from sketch to final oil is described and illustrated. Find out more
James McNeill Whistler (1834-1903) was a major figure in 19th century printmaking and created 490 etchings. Over 9500 impressions of these prints have been located and investigated during the project, which completes a series of catalogues raisonnés of Whistler's oeuvre. Find out more
Bess of Hardwick's Letters brings together, for the first time, the remarkable letters written to and from Bess of Hardwick (c.1521/2 or 1527-1608), one of Elizabethan England's most famous figures. Find out more
project

On this site you will find information about National songs published across the British Isles during the period 1750-1850, including detailed analyses of particular songs told via interactive timelines and 'song stories'. 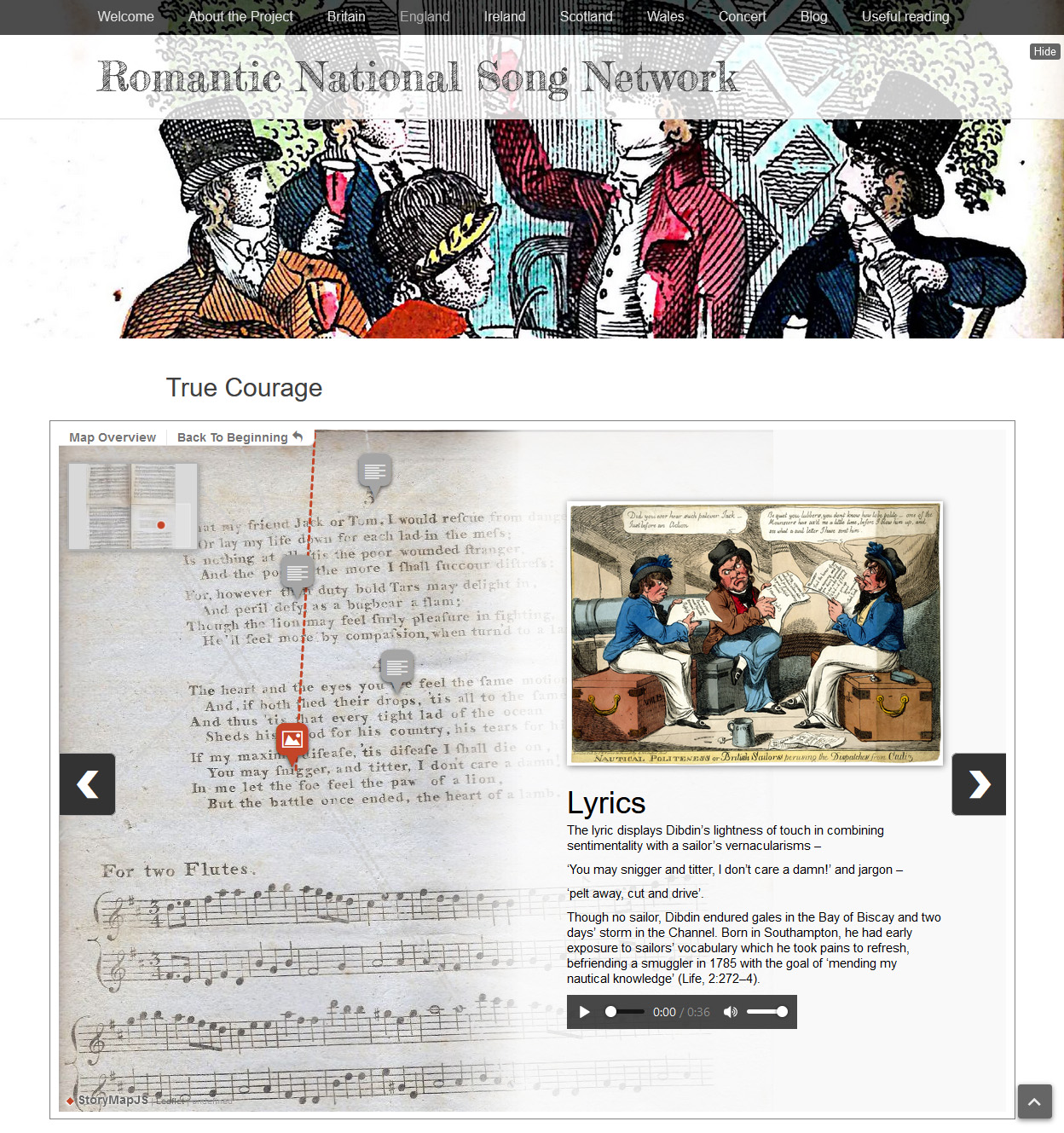 A 'Song Story' for 'True Courage' by Charles Dibdin

The aim of this Royal Society of Edinburgh funded network is to explore and map the area of national song culture in Scotland, England, Ireland and Wales during the period 1750-1850. The term ‘Romantic’ is widened here from the usual literary term meaning the period 1780-1830 and the musicological term meaning the period 1820-1900. By choosing the century 1750 to 1850 we are covering a time when printed song established itself and developed significantly, as the practice of performing songs at home became more commonplace. By ‘Song’ we are referring particularly to published song texts with music, thus focusing on how writers and composers were working together with editors and publishers to encourage both professional and amateur performance of these songs. While the project is chiefly concerned with the growing middle class consumption of songs, the series of song stories presented on this website clearly illustrates how ubiquitous the medium of song was across this century. Even though the vast majority of our song stories focus on songs printed with music for performance, all of them also show that these songs frequently had busy lives across a wide range of performance and printed media, evidencing that song was, in the words of Oskar Cox Jensen, ‘the most widespread and influential form of literary and musical expression of the day’ (2017: 1). Our series of commissioned blogs expand on this theme showing the appearance of national song not just in the domestic sphere, but in a variety of contexts including theatre, circus and war.

The network set out to bring together scholars working in literature and language, musicology, history, book history, and performance history, and to map the field bibliographically. We wanted to establish where these songs were published and performed and how they shaped public perceptions of the different national cultures of the British Isles. As the stories and blogs on the website evidence, the four nations of Britain (alongside many European nations) were actively collecting and disseminating what was presented to the public as ‘National Song’. While work has been done on some individual writers, composers and editors/publishers, there is still considerable confusion about the meaning of the term ‘National Song’ and little understanding of the relationships between the living song cultures of the British nations during this period of political upheaval. Our selection of song stories track the biographies of individual songs, important collections, writers, composers, editors, publishers and performers. They present, in the case of each of the four nations, a series of sometimes well-established national characteristics, but several of them also highlight a tendency for national songs of the period to adopt a transnational identity. The emerging genre of British song across the century shows a dynamic, if often unsettling or uncomfortable, process in which aspects of an ancient British history merge with the acute contemporary concerns around the British constitution and Britain’s place in the wider world.

The genre of song presents a number of significant difficulties not just because of its cultural ubiquity, but because of the nature of the form itself. Traditional literary historians have been more comfortable focusing purely on the textual or lyrical, while musicologists are often happier exploring the musical language and content. By working with group of specialists across a range of disciplines, the material on this website aims to present both a broader and deeper critical framework within which to examine Georgian and early Victorian song in Britain. Song culture from this period has, until recently, been relatively silent. However, as these stories illustrate, it was frequently performances of the songs that established their popularity; it is notable that a number of our featured songs are still popular today. As such, the network has been keen, where possible, to recreate the sounds of these songs as they might have been heard across the century 1750-1850  Such performances are embedded in our song stories, but were brought to life on a larger scale as part of our final concert performance, which is presented here in its entirety.

For those of us involved in the Network, this has been a rich and rewarding project. In addition to this website, our Network events have resulted in a number of additional research plans, which we hope will continue to enhance knowledge in Britain’s rich and diverse song culture.

Funded by: Royal Society of Edinburgh