Bess of Hardwick's Letters brings together, for the first time, the remarkable letters written to and from Bess of Hardwick (c.1521/2 or 1527-1608), one of Elizabethan England's most famous figures. Find out more
A database of all known people of Scotland between 1093 and 1314 mentioned in over 8600 contemporary documents. It is also being extended to 1371 to include all those lands, peoples and relationships mentioned in royal charters between 1314 and 1371. Find out more
The Scottish Corpora project has created large electronic corpora of written and spoken texts for the languages of Scotland, featuring nearly 4.6 million words of text, with audio recordings to accompany many of the spoken texts. Find out more
A publicly accessible, online scholarly edition of one of the most important archives of eighteenth-century medical "consultation letters", containing more than 20,000 digitised pages. Find out more
The resource provides ultrasound tongue imaging (UTI) and lip video of speech, magnetic resonance imaging (MRI) video of speech, and 2D midsagittal head animations based on MRI and UTI data. Find out more
The online catalogue includes some 550 oil paintings and over 1700 works on paper dating from ca 1850 to 1903. The evolution of each painting from sketch to final oil is described and illustrated. Find out more
The Scots Syntax Atlas presents the results of over 100,000+ acceptability judgments from over 500 speakers on over 250 morphosyntactic phenomena. The Atlas also contains a text-to-sound aligned corpus of spoken data totalling 275 hours and over 3 million words. Find out more
The project provides a richly-illustrated Catalogue of all known architectural projects by Charles Rennie Mackintosh, including over 1200 drawings by Mackintosh and the practice, analytical and contextual essays, a timeline and glossary. Find out more
As told by some of Scotland's best writers, and illustrated with thousands of images from the collections of the city's world-famous libraries, museums and universities. From football to fashions, Auchenshuggle to Yoker, you'll find it all here. Find out more
The Metaphor Map of English shows the metaphorical links which have been identified between different areas of meaning. These links can be from the Anglo-Saxon period right up to the present day so the map covers 1300 years of the English language. Find out more
project

The project presents audio recordings and accompanying commentary for twenty choral settings of works by Robert Burns by composers from across Europe since the early nineteenth century. 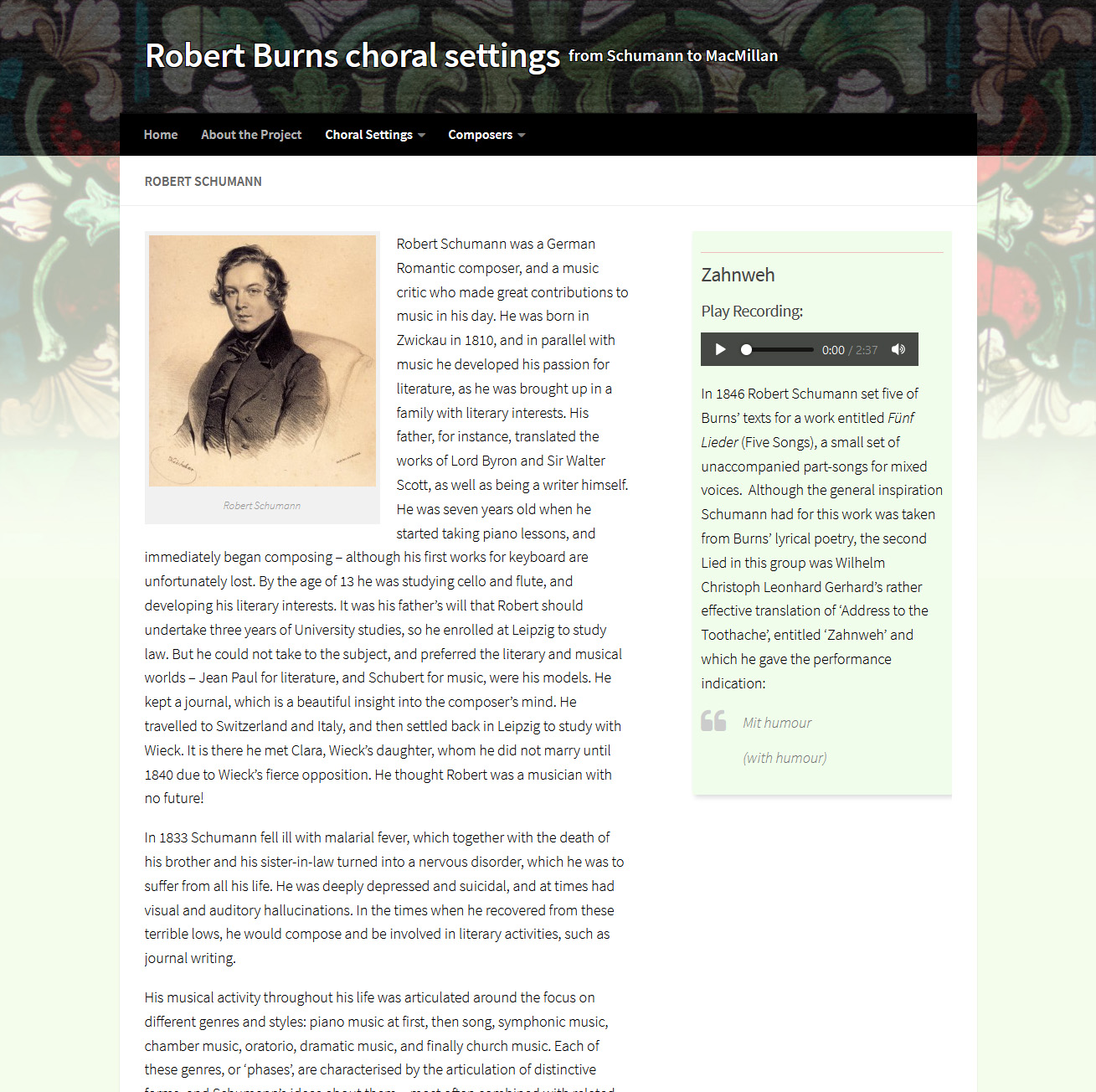 Page about the choral setting by Robert Schumann

The Centre for Robert Burns Studies and the Chapel Choir at the University of Glasgow collaborated in selecting a number of choral settings of works by Robert Burns which composers from a variety of European countries have produced since the early nineteenth century.

The Chapel Choir recorded performances of these for streaming, and this interactive website provides information about each of the settings and their composers. The project resulted from a chapter for a book entitled The Reception of Robert Burns in Europe, ed. by Murray Pittock and published in June 2014 (Bloomsbury). Dr McCue and the University former Professor of Music Marjorie Rycroft co-wrote the chapter ‘The Reception of Robert Burns in Music’, which explored a variety of different musical responses to Burns’ texts.

When Burns arrived in Edinburgh in November 1786, he found a culturally vibrant city. Here he met James Johnson, the man behind the Scots Musical Museum; and George Thomson – two figures with whom Burns collaborated very closely. Early musical setting of his songs can be found by J. G. C. Schetky and Pietro Urbani, but thanks to Thomson Burns’ works were set by Pleyel, Koželuch, Haydn, Beethoven, Weber, and Hummel. Mostly, tunes would be arranged according to traditional melodies; sometimes they would be composed ex novo. This is similar to what happened for the songs: Burns created some anew, while others were based on older verses.

While the melodies were clearly the link between Thomson’s European composers and Burns’ songs, a growing interest in Burns ‘the poet’ and his texts in translation became the European musical stimulant. It was in fact Burns’ words that made an impact on young Robert Schumann. What Schumann produced was his own musical response to Burns’ texts in translation. Robert Franz was a contemporary of Schumann, yet his settings of Burns’ songs are less known. Franz thought Schumann did not pay enough attention to the text. Franz sought out Burns’ originals, and did not rely on just the translations.

In more recent years, Estonian Arvo Pärt set ‘My Heart’s in the Highlands’ for organ and counter tenor in 2000. For the poet’s 250th birthday celebration, Scottish composer James MacMillan celebrated the connections between the Bard and his classical composers with Burns’ ‘Lament of Mary, Queen of Scots’, which had not previously gained musical interest.  Today, ‘Auld lang syne’ is one of the world’s best known songs. Composers and musicians worldwide have found inspiration in Burns’ work right from their initial publication: each musical creation has taken the Bard’s work to different places entirely: linguistically, musically, and culturally – ultimately, they reveal the universality of Burns’ poetic and musical voice.