The project provides a richly-illustrated Catalogue of all known architectural projects by Charles Rennie Mackintosh, including over 1200 drawings by Mackintosh and the practice, analytical and contextual essays, a timeline and glossary. Find out more
The Digital Catalogue documents, visually and textually, the first ten years of Andy Goldsworthy's ephemeral, outdoor practice. It replicates Goldsworthy's Slide Cabinet Index, and includes previously unpublished material from Goldsworthy's Sketchbook Diaries. Find out more
James McNeill Whistler (1834-1903) was a major figure in 19th century printmaking and created 490 etchings. Over 9500 impressions of these prints have been located and investigated during the project, which completes a series of catalogues raisonnés of Whistler's oeuvre. Find out more
The Scots Syntax Atlas presents the results of over 100,000+ acceptability judgments from over 500 speakers on over 250 morphosyntactic phenomena. The Atlas also contains a text-to-sound aligned corpus of spoken data totalling 275 hours and over 3 million words. Find out more
Bess of Hardwick's Letters brings together, for the first time, the remarkable letters written to and from Bess of Hardwick (c.1521/2 or 1527-1608), one of Elizabethan England's most famous figures. Find out more
A database of all known people of Scotland between 1093 and 1314 mentioned in over 8600 contemporary documents. It is also being extended to 1371 to include all those lands, peoples and relationships mentioned in royal charters between 1314 and 1371. Find out more
The University of Glasgow’s Historical Thesaurus of English is a unique resource charting the development of meaning in the huge and varied vocabulary of English. It consists of almost every recorded word in English from Anglo-Saxon times to the present day, all arranged into detailed hierarchies of meaning. Find out more
The project explores Romantic-period accounts of journeys into Wales and Scotland with a focus on the writings of the Flintshire naturalist and antiquarian Thomas Pennant (1726-1798), whose published Tours of both countries did so much to awaken public interest in the ‘peripheries’ of Britain. Find out more
The Metaphor Map of English shows the metaphorical links which have been identified between different areas of meaning. These links can be from the Anglo-Saxon period right up to the present day so the map covers 1300 years of the English language. Find out more
As told by some of Scotland's best writers, and illustrated with thousands of images from the collections of the city's world-famous libraries, museums and universities. From football to fashions, Auchenshuggle to Yoker, you'll find it all here. Find out more
project

The website for the AHRC Network: ‘Decadence and Translation’ features an online translation case study using rare and original manuscripts by the French poet, Stéphane Mallarmé 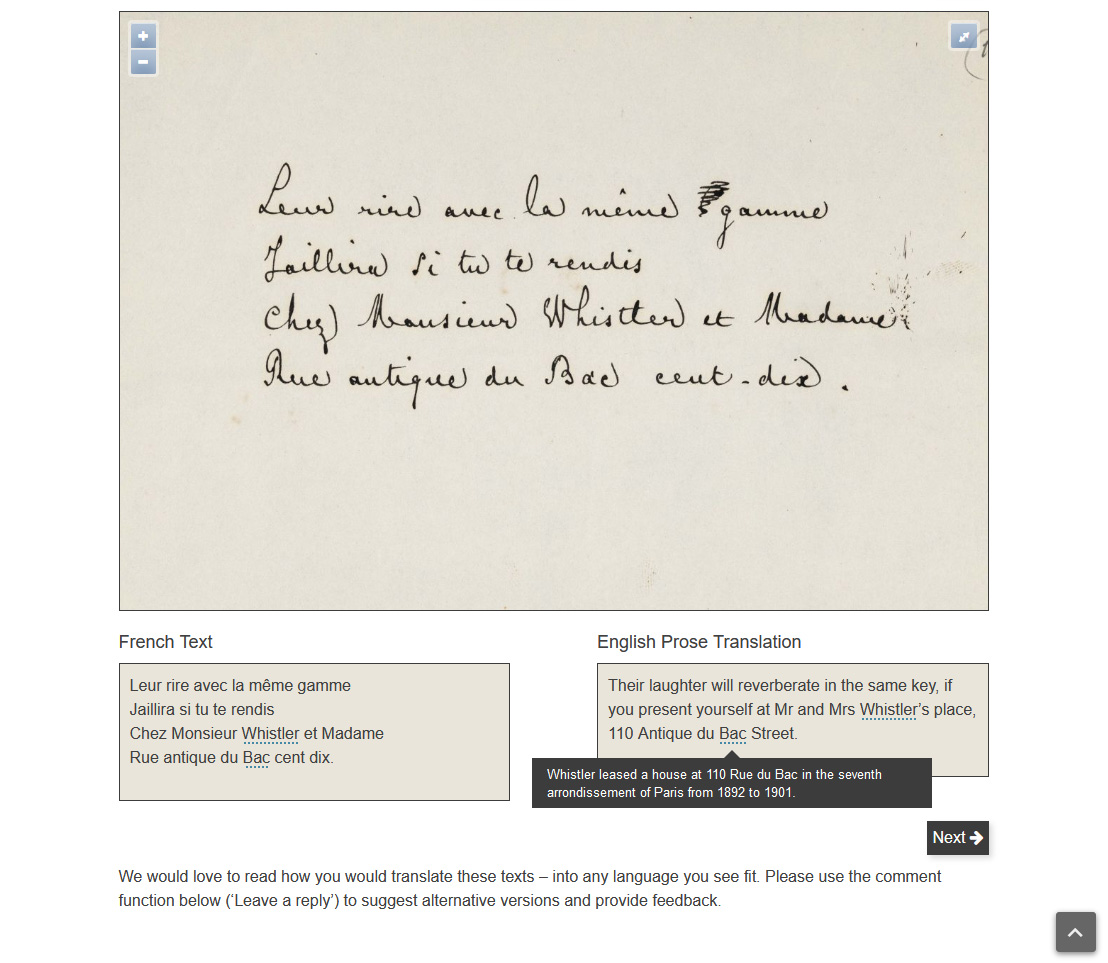 A letter from Mallarmé to Whistler, with French transcription, English translation and editorial notes

The AHRC Network ‘Decadence and Translation’ is led by Dr Matthew Creasy (University of Glasgow) and Professor Stefano-Maria Evangelista (Trinity College, Oxford). The project website contains information about members the network, the network’s activities, as well as links to useful sources of information.  It also features an interactive online translation case study using rare and original manuscripts by the French poet, Stéphane Mallarmé.

During a visit to Mallarmé in February 1892, the American artist James McNeill Whistler came across a notebook into which the poet has copied a set of quatrains, four line poems in the form of addresses. Mallarmé took a particular interest in creating ‘occasional’ verse – poems inscribed on objects and gifts such as fans or even glacé fruit, or poems that celebrate a particular person or event. The quatrains that Whistler discovered were all supposed to be written on envelopes for letters to his literary and artistic friends (although it’s not clear how many of them were actually sent).

Fascinated, Whistler undertook to get these poems into print for Mallarmé. He touted a manuscript copy of these poems to his own publisher, William Heinemann, under the title of Récréations postales. When this proposal was turned down, he took them to James Osgood of McIlvaine and Co. By September 1893 it looked as if a deluxe edition of 89 quatrains would be published the next year. But for unknown reasons, this never happened. Instead, a smaller edition of 27 quatrains appeared as ‘Loisirs de la poste’ in an American periodical called the Chap Book in December 1894. The fuller version of these poems was only published after Mallarmé’s death in volume called Vers de circonstance (1920).

Autograph copies of all 89 quatrains are now held at Glasgow University Library. These came to the Library through the gift of Whistler’s daughter-in-law, Rosalie Birne Philips and were included amongst a wealth of books, painting and manuscripts that make up the Whistler holdings in Special Collections.

As part of the ‘Decadence and Translation’ Network’s activities, the project is using a small selection of these quatrains for a translation case study. In addition to images of the manuscripts you will find transcriptions of the French originals and translations into plain English prose. These have all been annotated (click on underlined words and phrases for more information).  Readers are encouraged to contribute translations, versions or imitations of Mallarmé’s poems in any language form.