As told by some of Scotland's best writers, and illustrated with thousands of images from the collections of the city's world-famous libraries, museums and universities. From football to fashions, Auchenshuggle to Yoker, you'll find it all here. Find out more
The Scots Syntax Atlas presents the results of over 100,000+ acceptability judgments from over 500 speakers on over 250 morphosyntactic phenomena. The Atlas also contains a text-to-sound aligned corpus of spoken data totalling 275 hours and over 3 million words. Find out more
The University of Glasgow’s Historical Thesaurus of English is a unique resource charting the development of meaning in the huge and varied vocabulary of English. It consists of almost every recorded word in English from Anglo-Saxon times to the present day, all arranged into detailed hierarchies of meaning. Find out more
A database of all known people of Scotland between 1093 and 1314 mentioned in over 8600 contemporary documents. It is also being extended to 1371 to include all those lands, peoples and relationships mentioned in royal charters between 1314 and 1371. Find out more
A publicly accessible, online scholarly edition of one of the most important archives of eighteenth-century medical "consultation letters", containing more than 20,000 digitised pages. Find out more
The resource includes historical research for all Berwickshire place-names on the Ordnance Survey 1:50,000 Landranger map, including more than 1,600 place-names and 7,000 historical forms presented via a series of interactive maps. Find out more
The project explores Romantic-period accounts of journeys into Wales and Scotland with a focus on the writings of the Flintshire naturalist and antiquarian Thomas Pennant (1726-1798), whose published Tours of both countries did so much to awaken public interest in the ‘peripheries’ of Britain. Find out more
The project provides a richly-illustrated Catalogue of all known architectural projects by Charles Rennie Mackintosh, including over 1200 drawings by Mackintosh and the practice, analytical and contextual essays, a timeline and glossary. Find out more
Bess of Hardwick's Letters brings together, for the first time, the remarkable letters written to and from Bess of Hardwick (c.1521/2 or 1527-1608), one of Elizabethan England's most famous figures. Find out more
The resource provides ultrasound tongue imaging (UTI) and lip video of speech, magnetic resonance imaging (MRI) video of speech, and 2D midsagittal head animations based on MRI and UTI data. Find out more
project

An online edition of the Edinburgh Gazetteer, a controversial and short-lived radical Scottish newspaper from the turbulent 1790s, including an interactive map of reform societies. 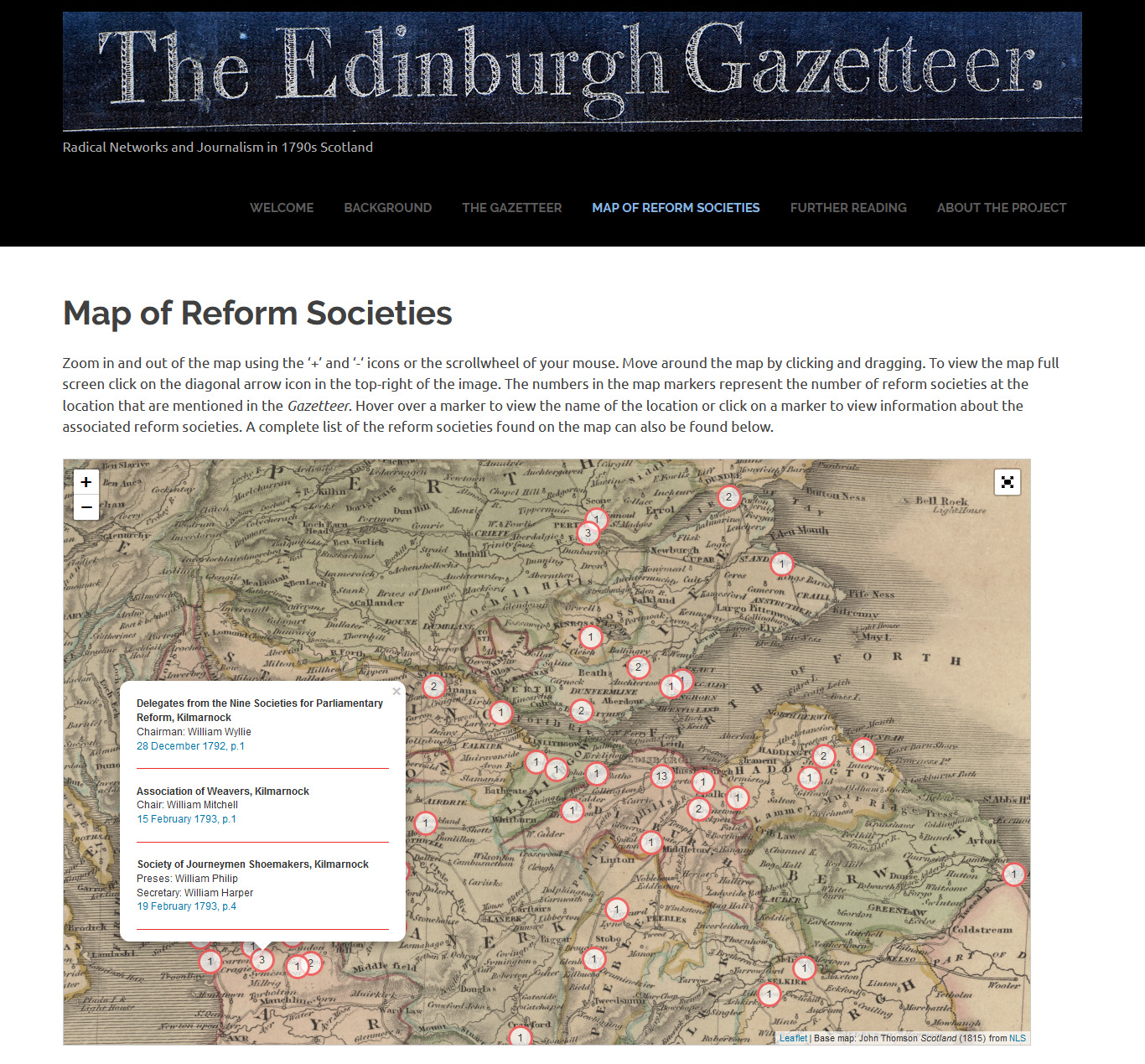 The resource features detailed facsimile images of every available page of the Gazetteer can be viewed and zoomed into, and each page has been categorised with keywords to make it easier to focus on specific themes or people. In addition, the site features an interactive historical map of reform societies that are mentioned in the Gazetteer, an introductory essay describing the background to the Gazetteer and a list of selected further reading.

The edition was edited by Rhona Brown, of Scottish Literature at the University of Glasgow. The Gazetteer and interactive map interfaces were developed by Brian Aitken, of the School of Critical Studies at the University of Glasgow. The edition was funded by the Royal Society of Edinburgh via a project entitled ‘The Edinburgh Gazetteer: Radical Networks and Journalism in 1790s Scotland’. Images of the newspaper were provided by the Mitchell Library in Glasgow, and the originals can be viewed there. The map appears courtesy of the Maps Department at the National Library of Scotland, Edinburgh.

Funded by: Royal Society of Edinburgh