The resource includes historical research for all Berwickshire place-names on the Ordnance Survey 1:50,000 Landranger map, including more than 1,600 place-names and 7,000 historical forms presented via a series of interactive maps. Find out more
The Digital Catalogue documents, visually and textually, the first ten years of Andy Goldsworthy's ephemeral, outdoor practice. It replicates Goldsworthy's Slide Cabinet Index, and includes previously unpublished material from Goldsworthy's Sketchbook Diaries. Find out more
The University of Glasgow’s Historical Thesaurus of English is a unique resource charting the development of meaning in the huge and varied vocabulary of English. It consists of almost every recorded word in English from Anglo-Saxon times to the present day, all arranged into detailed hierarchies of meaning. Find out more
The Scots Syntax Atlas presents the results of over 100,000+ acceptability judgments from over 500 speakers on over 250 morphosyntactic phenomena. The Atlas also contains a text-to-sound aligned corpus of spoken data totalling 275 hours and over 3 million words. Find out more
The online catalogue includes some 550 oil paintings and over 1700 works on paper dating from ca 1850 to 1903. The evolution of each painting from sketch to final oil is described and illustrated. Find out more
A database of all known people of Scotland between 1093 and 1314 mentioned in over 8600 contemporary documents. It is also being extended to 1371 to include all those lands, peoples and relationships mentioned in royal charters between 1314 and 1371. Find out more
A publicly accessible, online scholarly edition of one of the most important archives of eighteenth-century medical "consultation letters", containing more than 20,000 digitised pages. Find out more
Bess of Hardwick's Letters brings together, for the first time, the remarkable letters written to and from Bess of Hardwick (c.1521/2 or 1527-1608), one of Elizabethan England's most famous figures. Find out more
The resource provides ultrasound tongue imaging (UTI) and lip video of speech, magnetic resonance imaging (MRI) video of speech, and 2D midsagittal head animations based on MRI and UTI data. Find out more
The project explores Romantic-period accounts of journeys into Wales and Scotland with a focus on the writings of the Flintshire naturalist and antiquarian Thomas Pennant (1726-1798), whose published Tours of both countries did so much to awaken public interest in the ‘peripheries’ of Britain. Find out more
project

The project examined the neglected impact that local poetry and song cultures had on Scottish popular politics in the nineteenth and early twentieth centuries, and features a database of songs and a collection of audio recordings. 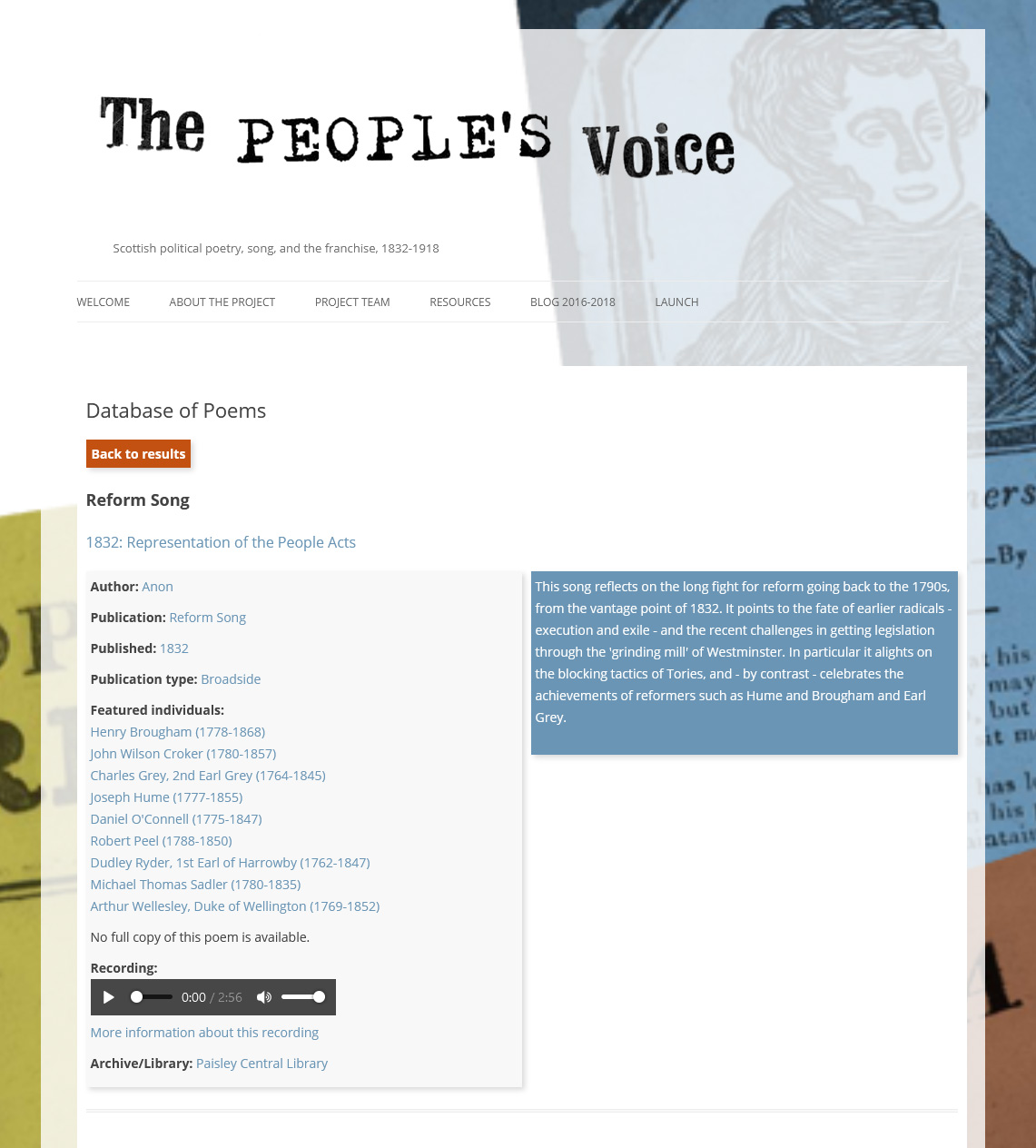 ‘The People’s Voice: Scottish political poetry, song and the franchise, 1832-1918’ was a cross-institutional research project led by Dr Catriona M. M. Macdonald at the University of Glasgow.  This project, which received a major grant from the Carnegie Trust for the Universities of Scotland in 2015, examined the neglected impact that local poetry and song cultures had on Scottish popular politics in the nineteenth and early twentieth centuries. To achieve a detailed understanding of this relationship, the project focused on the four successful campaigns to extend the electoral franchise in 1832, 1867/8, 1884 and 1918, and plotted these campaigns within broader historical narratives.

A key aim of this project was to disinter many of the poems and songs that appeared in Scotland’s periodical press in this period. Although these publications were common sites in which local poets published, and they nurtured lively song cultures, they had not yet been adequately explored by literary critics or historians. To remedy this, the project assessed archival holdings across various localities in Scotland, including Aberdeen, Ayrshire, Dundee, Edinburgh, Glasgow, Paisley and Stirling.

Several resources have been created to promote the study of political poetry as a source for Scottish History and Scottish Literature. A searchable database of every relevant poem found in Scotland’s archives is now available under the ‘resources’ tab on this website, accompanied by an edited anthology of fifty selected poems. Online essays have been commissioned as well as song recordings. You’ll find them all here. We organised several events in the course of the project, including an archives event at the National Library of Scotland in May 2016, schools outreach events in 2017, and an academic conference, which accompanied the launch of the resources in February 2018. A special edition of the Scottish Literary Review in 2018, to which many of the project team have contributed, also highlights related material.