As told by some of Scotland's best writers, and illustrated with thousands of images from the collections of the city's world-famous libraries, museums and universities. From football to fashions, Auchenshuggle to Yoker, you'll find it all here. Find out more
James McNeill Whistler (1834-1903) was a major figure in 19th century printmaking and created 490 etchings. Over 9500 impressions of these prints have been located and investigated during the project, which completes a series of catalogues raisonnés of Whistler's oeuvre. Find out more
The project explores Romantic-period accounts of journeys into Wales and Scotland with a focus on the writings of the Flintshire naturalist and antiquarian Thomas Pennant (1726-1798), whose published Tours of both countries did so much to awaken public interest in the ‘peripheries’ of Britain. Find out more
The Metaphor Map of English shows the metaphorical links which have been identified between different areas of meaning. These links can be from the Anglo-Saxon period right up to the present day so the map covers 1300 years of the English language. Find out more
A database of all known people of Scotland between 1093 and 1314 mentioned in over 8600 contemporary documents. It is also being extended to 1371 to include all those lands, peoples and relationships mentioned in royal charters between 1314 and 1371. Find out more
The resource provides ultrasound tongue imaging (UTI) and lip video of speech, magnetic resonance imaging (MRI) video of speech, and 2D midsagittal head animations based on MRI and UTI data. Find out more
Bess of Hardwick's Letters brings together, for the first time, the remarkable letters written to and from Bess of Hardwick (c.1521/2 or 1527-1608), one of Elizabethan England's most famous figures. Find out more
The online catalogue includes some 550 oil paintings and over 1700 works on paper dating from ca 1850 to 1903. The evolution of each painting from sketch to final oil is described and illustrated. Find out more
The University of Glasgow’s Historical Thesaurus of English is a unique resource charting the development of meaning in the huge and varied vocabulary of English. It consists of almost every recorded word in English from Anglo-Saxon times to the present day, all arranged into detailed hierarchies of meaning. Find out more
The Scottish Corpora project has created large electronic corpora of written and spoken texts for the languages of Scotland, featuring nearly 4.6 million words of text, with audio recordings to accompany many of the spoken texts. Find out more
project

A digital edition of Virginia Woolf’s short fiction ‘Ode written partly in prose on seeing the name of cutbush above a butcher’s shop in Pentonville’ that emerged from the work of the AHRC funded New Modernist Editing Network. 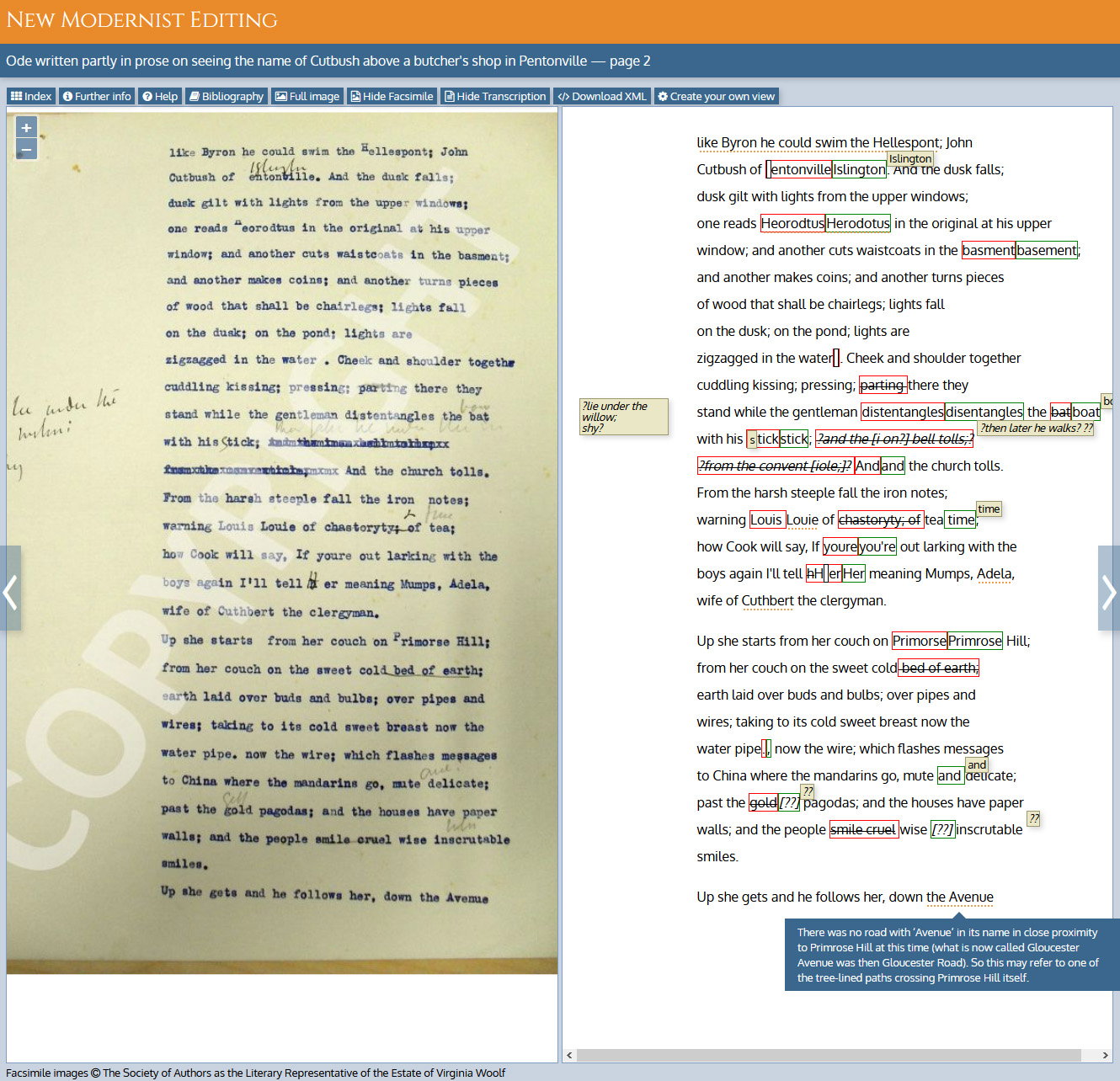 Page 2 of the 'Ode' showing the facsimile and transcription with both original and edited text visible.

See also the New Modernist Editing website at https://newmodernistediting.glasgow.ac.uk/. Virginia Woolf’s ‘Ode written partly in prose on seeing the name of cutbush above a butcher’s shop in Pentonville’ was never published in her lifetime. The only version we have of the text is the typescript, with emendations in Virginia Woolf’s hand (some in pencil and some in black ink), images of which are displayed in this digital edition. The typescript is held in the Monks House Papers of the University of Sussex, reference number SxMs-18/2/B/B.9/F.

Unusually, we know the precise date of some of these revisions as Woolf wrote 'October 28th 1934' in black ink in the top left hand corner of the first page of the typescript. To date is has been published only once, in Susan Dick’s The Complete Shorter Fiction of Virginia Woolf (London: Hogarth Press, 1985; rev. edn. 1989).

There is little in Woolf’s diaries or letters to provide any information about the circumstances of the composition of this text. She had finished the first full draft of the novel that was to be published in 1937 as The Years on 30th September 1934, and was feeling the exhaustion and, to some extent, depression that often accompanied the completion of a large work. The only hints at what might have prompted her to write this piece are two allusions from around the same time, one in her diary and one in a latter, to the pleasure she got from walking around London and imagining the lives of those she sees and overhears – a pleasure that sustained her through much of her life.

This digital edition emerged from the work of the AHRC funded New Modernist Editing Network. The Network was established to bring together academics, publishers and book artists concerned with the issues arising from the editing of modernist texts – broadly speaking, experimental works from the early twentieth century. All the major modernist editions currently underway are represented by its membership – an unprecedented coming together of key editors in the field. But the involvement of those from outwith academia, and with various levels and types of editorial experience, was also crucial to achieving the Network’s aims. The approach to producing the digital edition of Woolf’s ‘Ode’ was discussed and workshopped at two of the three meetings of the Network, in February and April 2017.

This digital edition is, then, a collaborative effort which draws on the discussions, debates and insights enabled by the Network. The desire was to produce a text which was dynamic and which could allow the user to see the effects of the many choices that an editor has to make in deciding how to approach an edition of a text. In particular, digital technologies permitted us to resist deciding on a ‘final’ text, and instead leave the reader to play with the level of editorial intervention visible on the screen.