The University of Glasgow’s Historical Thesaurus of English is a unique resource charting the development of meaning in the huge and varied vocabulary of English. It consists of almost every recorded word in English from Anglo-Saxon times to the present day, all arranged into detailed hierarchies of meaning. Find out more
The resource includes historical research for all Berwickshire place-names on the Ordnance Survey 1:50,000 Landranger map, including more than 1,600 place-names and 7,000 historical forms presented via a series of interactive maps. Find out more
A publicly accessible, online scholarly edition of one of the most important archives of eighteenth-century medical "consultation letters", containing more than 20,000 digitised pages. Find out more
The Metaphor Map of English shows the metaphorical links which have been identified between different areas of meaning. These links can be from the Anglo-Saxon period right up to the present day so the map covers 1300 years of the English language. Find out more
As told by some of Scotland's best writers, and illustrated with thousands of images from the collections of the city's world-famous libraries, museums and universities. From football to fashions, Auchenshuggle to Yoker, you'll find it all here. Find out more
The Scottish Corpora project has created large electronic corpora of written and spoken texts for the languages of Scotland, featuring nearly 4.6 million words of text, with audio recordings to accompany many of the spoken texts. Find out more
The project explores Romantic-period accounts of journeys into Wales and Scotland with a focus on the writings of the Flintshire naturalist and antiquarian Thomas Pennant (1726-1798), whose published Tours of both countries did so much to awaken public interest in the ‘peripheries’ of Britain. Find out more
The online catalogue includes some 550 oil paintings and over 1700 works on paper dating from ca 1850 to 1903. The evolution of each painting from sketch to final oil is described and illustrated. Find out more
The project provides a richly-illustrated Catalogue of all known architectural projects by Charles Rennie Mackintosh, including over 1200 drawings by Mackintosh and the practice, analytical and contextual essays, a timeline and glossary. Find out more
The resource provides ultrasound tongue imaging (UTI) and lip video of speech, magnetic resonance imaging (MRI) video of speech, and 2D midsagittal head animations based on MRI and UTI data. Find out more
project

The project features a searchable database of well over eight hundred newspaper advertisements placed by masters and owners seeking the capture and return of enslaved and bound people who had escaped. 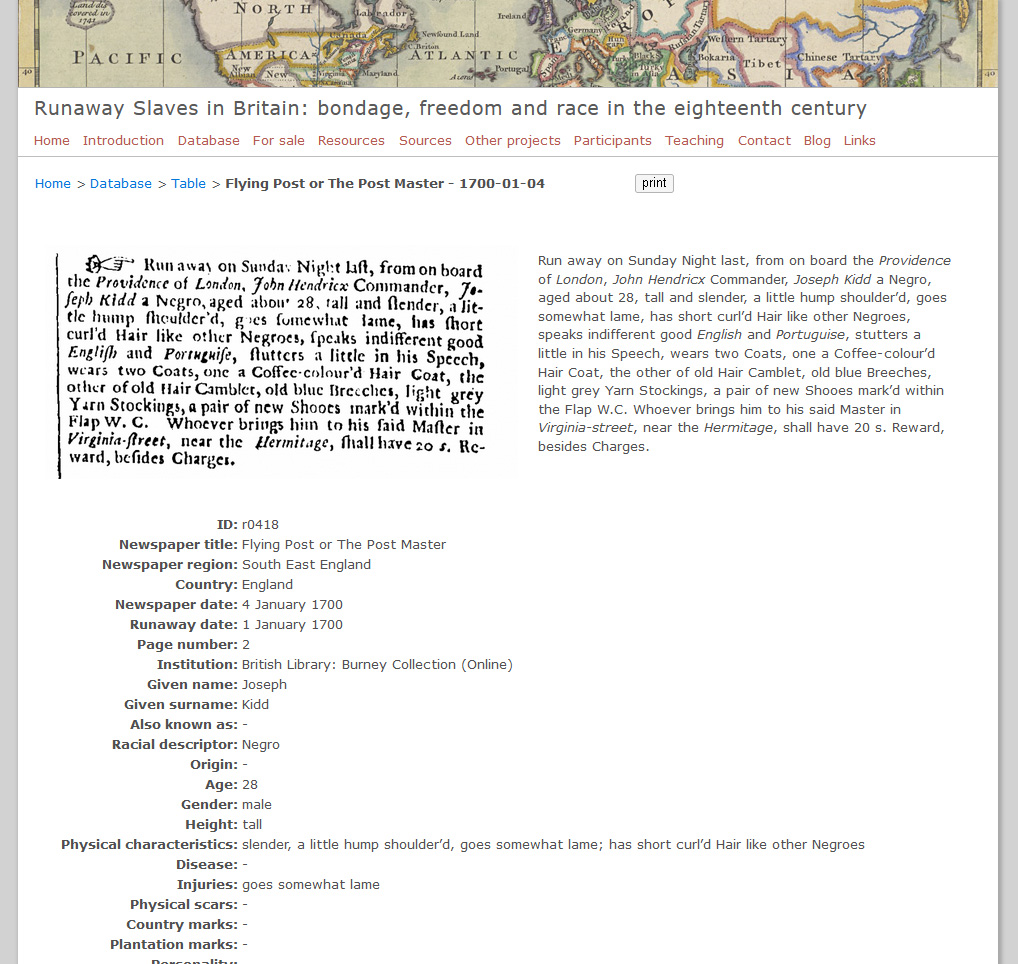 There were many thousands of people of African, Asian and Indigenous American descent in eighteenth-century Britain. A few such as Olaudah Equiano and Ignatius Sancho became quite famous but we know relatively little about most of these people because so few have left any records of their existence. Some were sailors and dock workers, while a few were craftsmen, labourers and washerwomen. Most, however, were domestic servants and workers in the households of elite and mercantile families who had spent time in or had connections with the British Empire’s colonies. Some were free, others were bound and indentured servants, and some were enslaved.

The Runaway Slaves in Eighteenth-Century Britain project has created a searchable database of well over eight hundred newspaper advertisements placed by masters and owners seeking the capture and return of enslaved and bound people who had escaped. Many were of African descent, though a small number were from the Indian sub-continent and a few were Indigenous Americans. To the enslaved flight represented one of the greatest acts of self-determination, and some historians have argued that runaways challenged the slave system from within and contributed to their own and others' eventual emancipation. While some were not enslaved, many were described by their masters as slaves and property. And while they were vulnerable to transport back to colonies where their status would be, at best, uncertain, few could enjoy complete freedom in Great Britain.

The principal sources for this project are English and Scottish newspapers published between 1700 and 1780. Although some have been digitized, the poor quality of surviving newsprint makes digital text searching unreliable, so project researchers have surveyed thousands of newspaper issues in archives all over Britain, some in their original print form as well as many more on microfilm or digital form. The database contains full transcriptions of advertisements, and when possible photographic reproductions (some have been digitally manipulated to improve legibility). A user guide explains how to make use of the database, and a glossary of terms used in the advertisements is also available. An additional document provides examples of newspaper advertisements offering enslaved people for sale in England and Scotland. Finally, these webpages include a guide to further reading and web resources, as well as resources designed to make this data useful to school teachers and their pupils.