The project provides a richly-illustrated Catalogue of all known architectural projects by Charles Rennie Mackintosh, including over 1200 drawings by Mackintosh and the practice, analytical and contextual essays, a timeline and glossary. Find out more
The Digital Catalogue documents, visually and textually, the first ten years of Andy Goldsworthy's ephemeral, outdoor practice. It replicates Goldsworthy's Slide Cabinet Index, and includes previously unpublished material from Goldsworthy's Sketchbook Diaries. Find out more
A publicly accessible, online scholarly edition of one of the most important archives of eighteenth-century medical "consultation letters", containing more than 20,000 digitised pages. Find out more
As told by some of Scotland's best writers, and illustrated with thousands of images from the collections of the city's world-famous libraries, museums and universities. From football to fashions, Auchenshuggle to Yoker, you'll find it all here. Find out more
The Metaphor Map of English shows the metaphorical links which have been identified between different areas of meaning. These links can be from the Anglo-Saxon period right up to the present day so the map covers 1300 years of the English language. Find out more
James McNeill Whistler (1834-1903) was a major figure in 19th century printmaking and created 490 etchings. Over 9500 impressions of these prints have been located and investigated during the project, which completes a series of catalogues raisonnés of Whistler's oeuvre. Find out more
The University of Glasgow’s Historical Thesaurus of English is a unique resource charting the development of meaning in the huge and varied vocabulary of English. It consists of almost every recorded word in English from Anglo-Saxon times to the present day, all arranged into detailed hierarchies of meaning. Find out more
The resource includes historical research for all Berwickshire place-names on the Ordnance Survey 1:50,000 Landranger map, including more than 1,600 place-names and 7,000 historical forms presented via a series of interactive maps. Find out more
Bess of Hardwick's Letters brings together, for the first time, the remarkable letters written to and from Bess of Hardwick (c.1521/2 or 1527-1608), one of Elizabethan England's most famous figures. Find out more
The online catalogue includes some 550 oil paintings and over 1700 works on paper dating from ca 1850 to 1903. The evolution of each painting from sketch to final oil is described and illustrated. Find out more
project

This pilot project resulted in a new online resource which aims to categorise the vocabulary of Scots, from the earliest records to the present, according to semantic field. It focuses on two categories that are rich in Scots vocabulary: weather and sports & games. 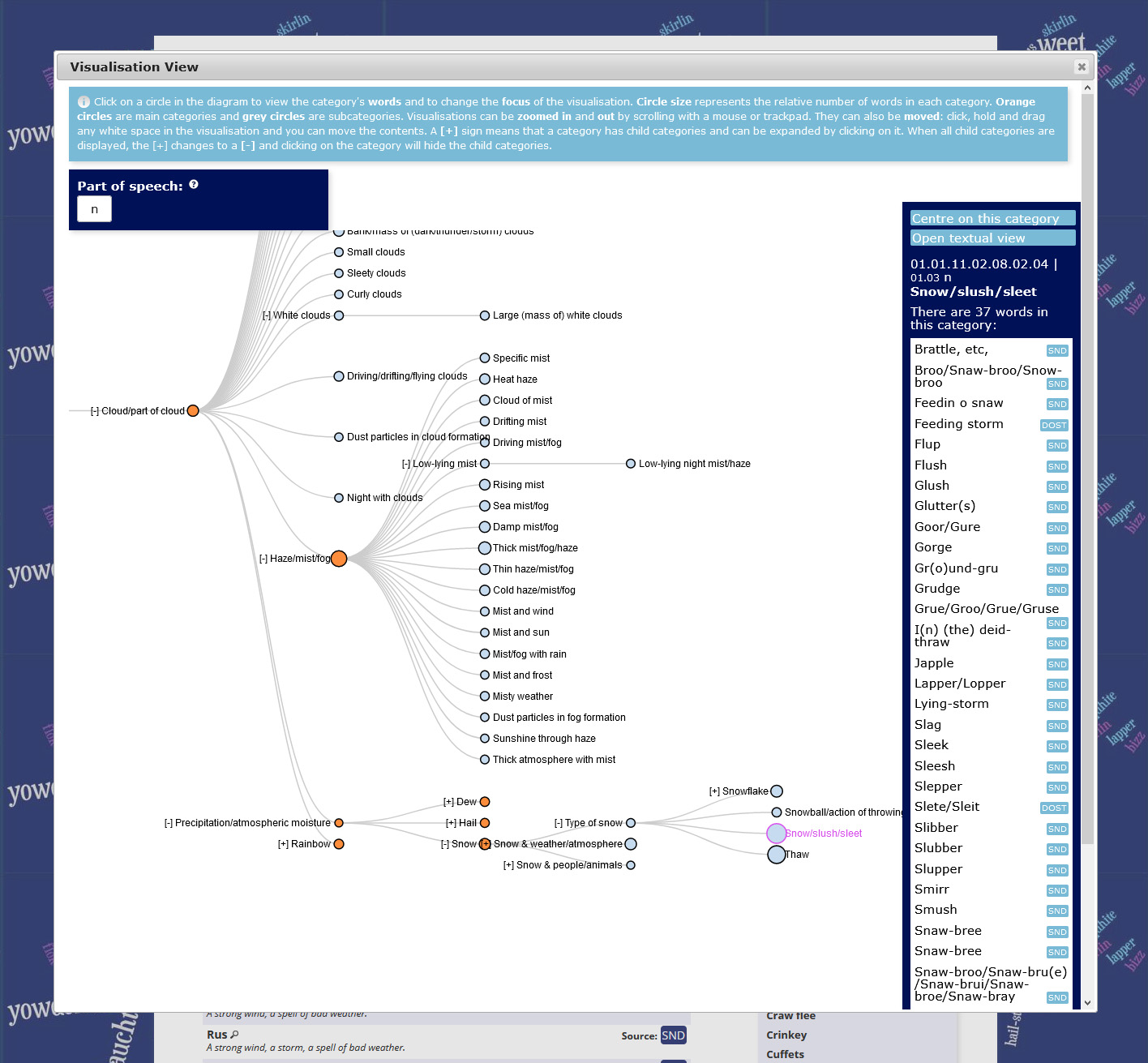 The Historical Thesaurus of Scots (HTS) project aimed to create a new, online thesaurus covering the vocabulary of Scots from the earliest records to the present day, based on the data in the Dictionary of the Scots Language (www.dsl.ac.uk). It was the first thesaurus of Scots organised on historical lines and the first comprehensive resource for the Scots language arranged according to synonymy and semantic category. It took as its model the landmark Historical Thesaurus of English (HTE), begun by the late Professor Michael Samuels at the University of Glasgow in 1965 and completed in 2008 under the direction of Professor Christian Kay.

The project intended to aid linguists, writers, schools, and the general public in their study of the Scots language, by providing new ways to explore the rich resources of Scots vocabulary. The project was a partnership with Scottish Language Dictionaries, who provided the source data from which the thesaurus was compiled.

The pilot was funded by a grant from the Arts & Humanities Research Council, under the Digital Transformations theme. It focused on selected subject domains which are rich in Scots vocabulary, including sports & games and weather, in order to create a subset of the thesaurus which will was made available online in September 2015.