The project provides a richly-illustrated Catalogue of all known architectural projects by Charles Rennie Mackintosh, including over 1200 drawings by Mackintosh and the practice, analytical and contextual essays, a timeline and glossary. Find out more
The Scottish Corpora project has created large electronic corpora of written and spoken texts for the languages of Scotland, featuring nearly 4.6 million words of text, with audio recordings to accompany many of the spoken texts. Find out more
The resource provides ultrasound tongue imaging (UTI) and lip video of speech, magnetic resonance imaging (MRI) video of speech, and 2D midsagittal head animations based on MRI and UTI data. Find out more
As told by some of Scotland's best writers, and illustrated with thousands of images from the collections of the city's world-famous libraries, museums and universities. From football to fashions, Auchenshuggle to Yoker, you'll find it all here. Find out more
The project explores Romantic-period accounts of journeys into Wales and Scotland with a focus on the writings of the Flintshire naturalist and antiquarian Thomas Pennant (1726-1798), whose published Tours of both countries did so much to awaken public interest in the ‘peripheries’ of Britain. Find out more
The Digital Catalogue documents, visually and textually, the first ten years of Andy Goldsworthy's ephemeral, outdoor practice. It replicates Goldsworthy's Slide Cabinet Index, and includes previously unpublished material from Goldsworthy's Sketchbook Diaries. Find out more
The Scots Syntax Atlas presents the results of over 100,000+ acceptability judgments from over 500 speakers on over 250 morphosyntactic phenomena. The Atlas also contains a text-to-sound aligned corpus of spoken data totalling 275 hours and over 3 million words. Find out more
The University of Glasgow’s Historical Thesaurus of English is a unique resource charting the development of meaning in the huge and varied vocabulary of English. It consists of almost every recorded word in English from Anglo-Saxon times to the present day, all arranged into detailed hierarchies of meaning. Find out more
A publicly accessible, online scholarly edition of one of the most important archives of eighteenth-century medical "consultation letters", containing more than 20,000 digitised pages. Find out more
James McNeill Whistler (1834-1903) was a major figure in 19th century printmaking and created 490 etchings. Over 9500 impressions of these prints have been located and investigated during the project, which completes a series of catalogues raisonnés of Whistler's oeuvre. Find out more
project

At HMS.scot you can find the details of over 200 Scottish printed sources of fiddle music from before 1850. There also images and indexes of 22 whole books from the University of Glasgow and Perth's A K Bell Library. Browse the collection, search for tunes and composers, and play the tunes! 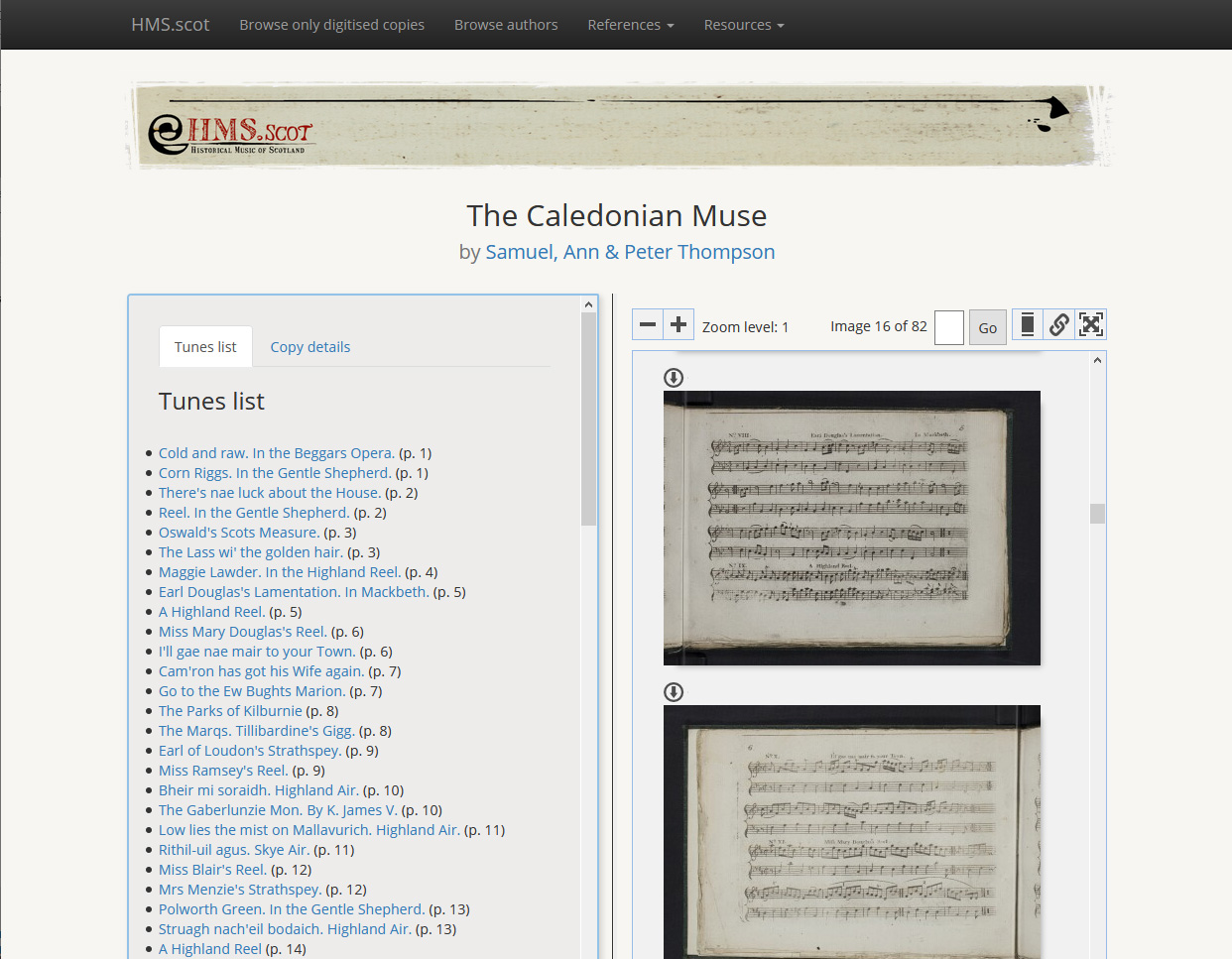 Catalogue entry for 'The Caledonian Muse'

The project database includes over 200 printed sources of Scottish fiddle music from before 1850. It omits publications of songs and airs, and because of its bass-led focus, sources without basslines. Most of the sources are substantial printed collections, but the database also includes some of the hundreds of surviving single-sheet publications. Manuscript sources were excluded purely to keep the project to a manageable size at this stage.

Finding the limits of the repertoire to be included was work-in-progress. The project began by looking for sources of 'Scottish fiddle music', but the boundaries of this became ever more porous and difficult to define. In the past, Scottish fiddlers were familiar with a more diverse repertoire than our present-day conception of Scottish fiddle music might suggest. Also, the notion of Scottishness in music is difficult to pin down in a period when the notion of a national culture was only gradually taking shape.

Theoretical models for describing and analysing this music are still in their very early stages, so a detailed (or definitive) analysis is both inappropriate and probably impossible. The short notes on the music in each source give