As told by some of Scotland's best writers, and illustrated with thousands of images from the collections of the city's world-famous libraries, museums and universities. From football to fashions, Auchenshuggle to Yoker, you'll find it all here. Find out more
The online catalogue includes some 550 oil paintings and over 1700 works on paper dating from ca 1850 to 1903. The evolution of each painting from sketch to final oil is described and illustrated. Find out more
The Metaphor Map of English shows the metaphorical links which have been identified between different areas of meaning. These links can be from the Anglo-Saxon period right up to the present day so the map covers 1300 years of the English language. Find out more
James McNeill Whistler (1834-1903) was a major figure in 19th century printmaking and created 490 etchings. Over 9500 impressions of these prints have been located and investigated during the project, which completes a series of catalogues raisonnés of Whistler's oeuvre. Find out more
A database of all known people of Scotland between 1093 and 1314 mentioned in over 8600 contemporary documents. It is also being extended to 1371 to include all those lands, peoples and relationships mentioned in royal charters between 1314 and 1371. Find out more
The Scots Syntax Atlas presents the results of over 100,000+ acceptability judgments from over 500 speakers on over 250 morphosyntactic phenomena. The Atlas also contains a text-to-sound aligned corpus of spoken data totalling 275 hours and over 3 million words. Find out more
The project provides a richly-illustrated Catalogue of all known architectural projects by Charles Rennie Mackintosh, including over 1200 drawings by Mackintosh and the practice, analytical and contextual essays, a timeline and glossary. Find out more
A publicly accessible, online scholarly edition of one of the most important archives of eighteenth-century medical "consultation letters", containing more than 20,000 digitised pages. Find out more
The Scottish Corpora project has created large electronic corpora of written and spoken texts for the languages of Scotland, featuring nearly 4.6 million words of text, with audio recordings to accompany many of the spoken texts. Find out more
The Digital Catalogue documents, visually and textually, the first ten years of Andy Goldsworthy's ephemeral, outdoor practice. It replicates Goldsworthy's Slide Cabinet Index, and includes previously unpublished material from Goldsworthy's Sketchbook Diaries. Find out more
project

The project produced a catalogue of more than 1,000 incunabula in the University of Glasgow Library and other Glasgow institutions. 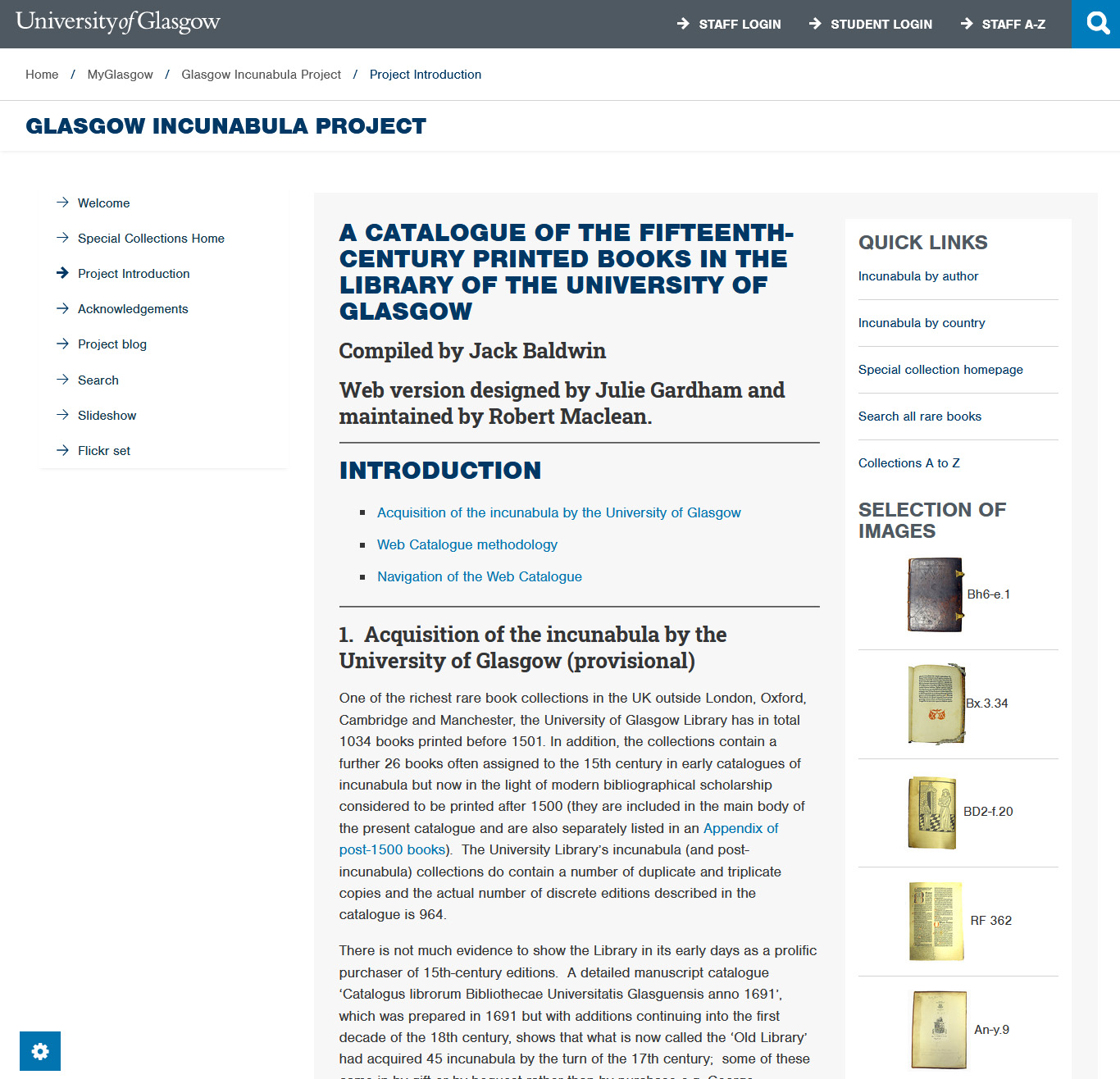 In addition, the project undertook a complete revision of the present records for University incunabula scattered throughout the Library’s main online catalogue, many of which – produced nearly a century ago – now show deficiencies and inaccuracies. One of the richest rare book collections in the UK outside London, Oxford, Cambridge and Manchester, the University of Glasgow Library has in total 1034 books printed before 1501. In addition, the collections contain a further 26 books often assigned to the 15th century in early catalogues of incunabula but now in the light of modern bibliographical scholarship considered to be printed after 1500 (they are included in the main body of the present catalogue and are also separately listed in an Appendix of post-1500 books).  The University Library’s incunabula (and post-incunabula) collections do contain a number of duplicate and triplicate copies and the actual number of discrete editions described in the catalogue is 964.

The Web Catalogue is essentially a short-title catalogue with author, title and imprint given in a standard form as in ISTC (Incunabula short-title catalogue i.e. the online international database of incunabula maintained by the British Library). Elaborate transcriptions of the title or incipit and colophon or explicit have been avoided since these are generally easily accessible in the standard incunabula catalogues such as BMC (Catalogue of books printed in the XVth century now in the British Museum) and GW (Gesamtkatalog der Wiegendrucke). In a few instances, when no adequate description of an edition exists in print, a quasi facsimile transcription of title and imprint has been provided, modelled on BMC’s entries. The emphasis throughout in compiling each record has been to research and describe the unique attributes of each book i.e. to concentrate on copy-specific details:  provenance, binding, annotations, decoration added by hand, imperfections.

The Web Catalogue can be approached in two main ways. For those users primarily interested in authors and texts, there is an A-Z author sequence. For those users whose interests veer more towards the history of printing, there is an A-Z sequence by country, town and printer. The aim throughout in designing and constructing the Web Catalogue has been to enable the user to exploit to the full the often complex array of data contained within each record. We hope we have been able to go some way to achieving this aim by the construction of a series of indexes, whose contents are directly linked to the full web records.