A publicly accessible, online scholarly edition of one of the most important archives of eighteenth-century medical "consultation letters", containing more than 20,000 digitised pages. Find out more
The Scots Syntax Atlas presents the results of over 100,000+ acceptability judgments from over 500 speakers on over 250 morphosyntactic phenomena. The Atlas also contains a text-to-sound aligned corpus of spoken data totalling 275 hours and over 3 million words. Find out more
The University of Glasgow’s Historical Thesaurus of English is a unique resource charting the development of meaning in the huge and varied vocabulary of English. It consists of almost every recorded word in English from Anglo-Saxon times to the present day, all arranged into detailed hierarchies of meaning. Find out more
The resource provides ultrasound tongue imaging (UTI) and lip video of speech, magnetic resonance imaging (MRI) video of speech, and 2D midsagittal head animations based on MRI and UTI data. Find out more
The project provides a richly-illustrated Catalogue of all known architectural projects by Charles Rennie Mackintosh, including over 1200 drawings by Mackintosh and the practice, analytical and contextual essays, a timeline and glossary. Find out more
The online catalogue includes some 550 oil paintings and over 1700 works on paper dating from ca 1850 to 1903. The evolution of each painting from sketch to final oil is described and illustrated. Find out more
The Digital Catalogue documents, visually and textually, the first ten years of Andy Goldsworthy's ephemeral, outdoor practice. It replicates Goldsworthy's Slide Cabinet Index, and includes previously unpublished material from Goldsworthy's Sketchbook Diaries. Find out more
The Scottish Corpora project has created large electronic corpora of written and spoken texts for the languages of Scotland, featuring nearly 4.6 million words of text, with audio recordings to accompany many of the spoken texts. Find out more
Bess of Hardwick's Letters brings together, for the first time, the remarkable letters written to and from Bess of Hardwick (c.1521/2 or 1527-1608), one of Elizabethan England's most famous figures. Find out more
The project explores Romantic-period accounts of journeys into Wales and Scotland with a focus on the writings of the Flintshire naturalist and antiquarian Thomas Pennant (1726-1798), whose published Tours of both countries did so much to awaken public interest in the ‘peripheries’ of Britain. Find out more
project

A site is about the artist Louise Jopling (1843-1933), painter of portraits, genre and interiors, teacher and suffragist. 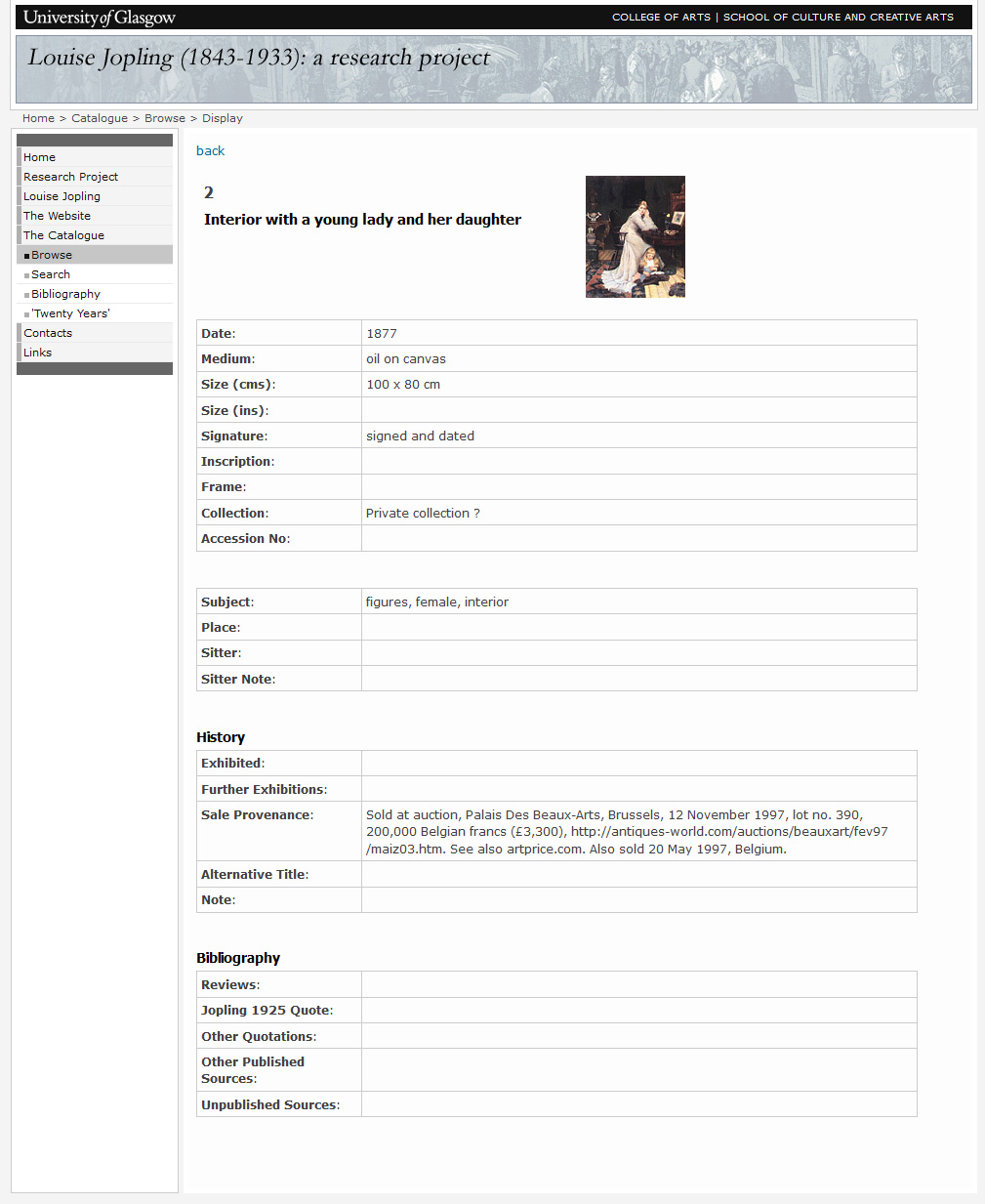 Catalogue entry for 'Interior with a youn lady and her daughter'

The project documents Louise Jopling's career as a leading female artist and her close-knit artistic, literary and theatrical world of late 19th century London and Paris. It also seeks to understand better the climate in which women then practised as artists and, more generally, the climate for women's growing participation in the workplace and in public life.

Core aspects of the project an electronic catalogue raisonné of Jopling's works, including exhibition histories, sale histories and reproductions of each work where possible; a hard-copy biographical and cultural study of Jopling by Patricia de Montfort, Louise Jopling: A Biographical and Cultural Study of the Modern Woman Artist in Victorian Britain, published by Routledge-Ashgate; the first public display of her work for over 70 years, which took place at The Hunterian, University of Glasgow from 13 March-13 September 2015; a database index of an important private collection of Jopling's correspondence; the transcription and annotation of Jopling's correspondence (correspondents include leading literary, artistic and theatrical figures of the day such as James McNeill Whistler Oscar Wilde, Ellen Terry, Kate Perugini, William Holman Hunt, Sir John Everett Millais, and Punch editor, Shirley Brooks); the digitisation and annotation of her studio and household notebooks with the aim of analysing the economic basis of Jopling's studio and exhibition activity; an online edition of Jopling’s 1925 memoir, Twenty Years of My Life, 1867-1887.