The Digital Catalogue documents, visually and textually, the first ten years of Andy Goldsworthy's ephemeral, outdoor practice. It replicates Goldsworthy's Slide Cabinet Index, and includes previously unpublished material from Goldsworthy's Sketchbook Diaries. Find out more
A publicly accessible, online scholarly edition of one of the most important archives of eighteenth-century medical "consultation letters", containing more than 20,000 digitised pages. Find out more
As told by some of Scotland's best writers, and illustrated with thousands of images from the collections of the city's world-famous libraries, museums and universities. From football to fashions, Auchenshuggle to Yoker, you'll find it all here. Find out more
The Scots Syntax Atlas presents the results of over 100,000+ acceptability judgments from over 500 speakers on over 250 morphosyntactic phenomena. The Atlas also contains a text-to-sound aligned corpus of spoken data totalling 275 hours and over 3 million words. Find out more
The Metaphor Map of English shows the metaphorical links which have been identified between different areas of meaning. These links can be from the Anglo-Saxon period right up to the present day so the map covers 1300 years of the English language. Find out more
The project explores Romantic-period accounts of journeys into Wales and Scotland with a focus on the writings of the Flintshire naturalist and antiquarian Thomas Pennant (1726-1798), whose published Tours of both countries did so much to awaken public interest in the ‘peripheries’ of Britain. Find out more
A database of all known people of Scotland between 1093 and 1314 mentioned in over 8600 contemporary documents. It is also being extended to 1371 to include all those lands, peoples and relationships mentioned in royal charters between 1314 and 1371. Find out more
The resource includes historical research for all Berwickshire place-names on the Ordnance Survey 1:50,000 Landranger map, including more than 1,600 place-names and 7,000 historical forms presented via a series of interactive maps. Find out more
James McNeill Whistler (1834-1903) was a major figure in 19th century printmaking and created 490 etchings. Over 9500 impressions of these prints have been located and investigated during the project, which completes a series of catalogues raisonnés of Whistler's oeuvre. Find out more
The University of Glasgow’s Historical Thesaurus of English is a unique resource charting the development of meaning in the huge and varied vocabulary of English. It consists of almost every recorded word in English from Anglo-Saxon times to the present day, all arranged into detailed hierarchies of meaning. Find out more

The Speak For Yersel project launched this week and is now available to use here: https://speakforyersel.ac.uk/.  It’s been a pretty intense project to work on and has required much more work than I’d expected, but I’m very happy with the end result.  We didn’t get as much media attention as we were hoping for, but social media worked out very well for the project and in the space of a week we’d had more than 5,000 registered users completing thousands of survey questions.  I spent some time this week tweaking things after the launch.  For example, I hadn’t added the metadata tags required by Twitter and Facebook / WhatsApp to nicely format links to the website (for example the information detailed here https://developers.facebook.com/docs/sharing/webmasters/) and it took a bit of time to add these in with the correct content.

I also gave some advice to Anja Kuschmann at Strathclyde about applying for a domain for the new VARICS project I’m involved with and investigated a replacement batch of videos that Eleanor had created for the Seeing Speech website.  I’ll need to wait until she gets back to me with files that match the filenames used on the existing site before I can take this further, though.  I also fixed an issue with the Berwickshire place-names website which has lost its additional CSS and investigated a problem with the domain for the Uist Saints website that has still unfortunately not been resolved.

Other than these tasks I spent the rest of the week continuing to develop the front-end for the Books and Borrowing project.  I completed an initial version of the ‘page’ view, including all three views (image, text and image and text).  I added in a ‘jump to page’ feature, allowing you (as you might expect) to jump directly to any page in the register when viewing a page.  I also completed the ‘text’ view of the page, which now features all of the publicly accessible data relating to the records – borrowing records, borrowers, book holding and item records and any associated book editions and book works, plus associated authors.  There’s an awful lot of data and it took quite a lot of time to think about how best to lay it all out (especially taking into consideration screens of different sizes), but I’m pretty happy with how this first version looks.

Currently the first thing you see for a record is the transcribed text, which is big and green.  Then all fields relating to the borrowing appear under this.  The record number as it appears on the page plus the record’s unique ID are displayed in the top right for reference (and citation).  Then follows a section about the borrower, with the borrower’s name in green (I’ve used this green to make all of the most important bits of text stand out from the rest of the record but the colour may be changed in future).  Then follows the information about the book holding and any specific volumes that were borrowed.  If there is an associated site-wide book edition record (or records) these appear in a dark grey box, together with any associated book work record (although there aren’t many of these associations yet).  If there is a link to a library record this appears as a button on the right of the record.  Similarly, if there’s an ESTC and / or other authority link for the edition these appear to the right of the edition section.

One other thing I’ve added in is the option to highlight a record.  Press anywhere in a record and it is highlighted in yellow.  Press again to reset it.  This can be quite useful as you’re scrolling through a page with lots of records on if there are certain records you’re interested in.  You can highlight as many records as you want.  It’s possible that we may add other functionality to this, e.g. the option to download the data for selected records.  Here’s a screenshot of the text view of the page: 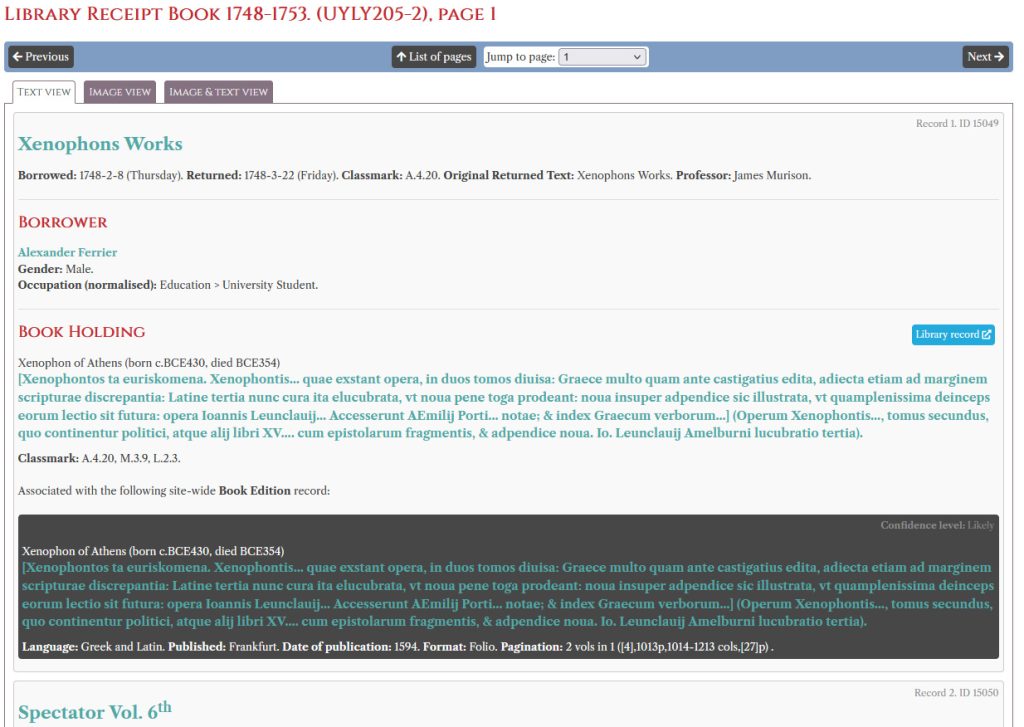 I also completed the ‘image and text’ view.  This works best on a large screen (i.e. not a mobile phone, although it is just about possible to use it on one, as I did test this out).  The image takes up about 60% of the screen width and the text takes up the remaining 40%.   The height of the records section is fixed to the height of the image area and is scrollable, so you can scroll down the records whilst still viewing the image (rather than the whole page scrolling and the image disappearing off the screen).  I think this view works really well and the records are still perfectly usable in the more confined area and it’s great to be able to compare the image and the text side by side.  Here’s a screenshot of the same page when viewing both text and image: 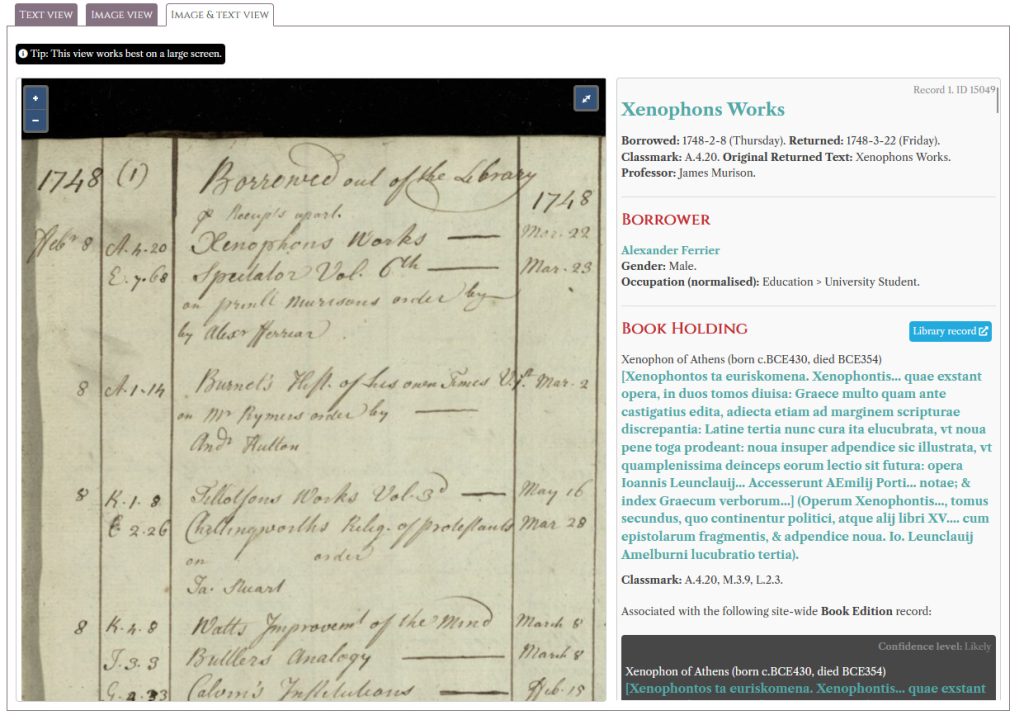 I tested the new interface out with registers from all of our available libraries and everything is looking good to me.  Some registers don’t have images yet, so I added in a check for this to ensure that the image views and page thumbnails don’t appear for such registers.  After that I moved onto developing the interface to browse book holdings when viewing a library.  I created an API endpoint for returning all of the data associated with holding records for a specified library.  This includes all of the book holding data, information about each of the book items associated with the holding record (including the number of borrowing records for each), the total number of borrowing records for the holding, any associated book edition and book work records (and there may be multiple editions associated with each holding) plus any authors associated with the book.  Authors cascade down through the record as they do when viewing borrowing records in the page.  This is a gigantic amount of information, especially as libraries may have many thousands of book holding records.  The API call loads pretty rapidly for smaller libraries (e.g. Chambers Library with 961 book holding records) but for larger ones (e.g. St Andrews with over 8,500 book holding records) the API call takes too long to return the data (in the latter case it takes about a minute and returns a JSON file that’s over 6Mb in size).  The problem is the data needs to be returned in full in order to do things like order it by largest number of borrowings.  Clearly dynamically generating the data each time is going to be too slow so instead I am going to investigate caching the data.  For example, that 6Mb JSON file can just site there as an actual file rather than being generated each time.  Instead I will write a script to regenerate the cached files and I can run this whenever data gets updated (or maybe once a week whilst the project is still active).  I’ll continue to work on this next week.