The resource provides ultrasound tongue imaging (UTI) and lip video of speech, magnetic resonance imaging (MRI) video of speech, and 2D midsagittal head animations based on MRI and UTI data. Find out more
A publicly accessible, online scholarly edition of one of the most important archives of eighteenth-century medical "consultation letters", containing more than 20,000 digitised pages. Find out more
The resource includes historical research for all Berwickshire place-names on the Ordnance Survey 1:50,000 Landranger map, including more than 1,600 place-names and 7,000 historical forms presented via a series of interactive maps. Find out more
The project provides a richly-illustrated Catalogue of all known architectural projects by Charles Rennie Mackintosh, including over 1200 drawings by Mackintosh and the practice, analytical and contextual essays, a timeline and glossary. Find out more
The project explores Romantic-period accounts of journeys into Wales and Scotland with a focus on the writings of the Flintshire naturalist and antiquarian Thomas Pennant (1726-1798), whose published Tours of both countries did so much to awaken public interest in the ‘peripheries’ of Britain. Find out more
The Digital Catalogue documents, visually and textually, the first ten years of Andy Goldsworthy's ephemeral, outdoor practice. It replicates Goldsworthy's Slide Cabinet Index, and includes previously unpublished material from Goldsworthy's Sketchbook Diaries. Find out more
James McNeill Whistler (1834-1903) was a major figure in 19th century printmaking and created 490 etchings. Over 9500 impressions of these prints have been located and investigated during the project, which completes a series of catalogues raisonnés of Whistler's oeuvre. Find out more
The Metaphor Map of English shows the metaphorical links which have been identified between different areas of meaning. These links can be from the Anglo-Saxon period right up to the present day so the map covers 1300 years of the English language. Find out more
The Scots Syntax Atlas presents the results of over 100,000+ acceptability judgments from over 500 speakers on over 250 morphosyntactic phenomena. The Atlas also contains a text-to-sound aligned corpus of spoken data totalling 275 hours and over 3 million words. Find out more
As told by some of Scotland's best writers, and illustrated with thousands of images from the collections of the city's world-famous libraries, museums and universities. From football to fashions, Auchenshuggle to Yoker, you'll find it all here. Find out more

I divided my time between a number of different projects this week.  For Speak For Yersel I replaced the ‘click’ transcripts with new versions that incorporated shorter segments and more highlighted words.  As the segments were now different I also needed to delete all existing responses to the ‘click’ activity.  I then completed the activity once for each speaker to test things out, and all seems to work fine with the new data.  I also changed the pop-up ‘percentage clicks’ text to ‘% clicks occurred here’, which is more accurate than the previous text which suggested it was the percentage of respondents.  I also fixed an issue with the map height being too small on the ‘where do you think this speaker is from’ quiz and ensured the page scrolls to the correct place when a new question is loaded.  I also removed the ‘tip’ text from the quiz intros and renamed the ‘where do you think this speaker is from’ map buttons on the map intro page.  I’d also been asked to trim down the number of ‘translation’ questions from the ‘I would never say that’ activity so I removed some of those.  I then changed and relocated the ‘heard in films and TV’ explanatory text removed the question mark from the ‘where do you think the speaker is from’ quiz intro page.

Mary had encountered a glitch with the transcription popups, whereby the page would flicker and jump about when certain popups were hovered over.  This was caused by the page height increasing to accommodate the pop-up, causing a scrollbar to appear in the browser, which changed the position of the cursor and made the pop-up disappear, making the scrollbar go and causing a glitchy loop.  I increased the height of the page for this activity so the scrollbar issue is no longer encountered, and I also made the popups a bit wider so they don’t need to be as long.  Mary also noticed that some of the ‘all over Scotland’ dynamically generated map answers seemed to be incorrect.  After some investigation I realised that this was a bug that had been introduced when I added in the ‘I would never say that’ quizzes on Friday.  A typo in the code meant that the 60% threshold for correct answers in each region was being used rather than ‘100 divided by the number of answer options’.  Thankfully once identified this was easy to fix.

I also participated in a Zoom call for the project this week to discuss the launch of the resource with the University’s media people.  It was agreed that the launch will be pushed back to the beginning of October as this should be a good time to get publicity.  Finally for the project this week I updated the structure of the site so that the ‘About’ menu item could become a drop-down menu, and I created placeholder pages for three new pages that will be added to this menu for things like FAQs.

I also continued to work on the Books and Borrowing project this week.  On Friday last week I didn’t quite get to finish a script to merge page records for one of the St Andrews registers as it needed further testing on my local PC before I ran it on the live data.  I tackled this issue first thing on Monday and it was a task I had hoped would only take half an hour or so.  Unfortunately things did not go well and it took most of the morning to sort out.  I initially attempted to run things on my local PC to test everything out, but I forgot to update the database connection details.  Usually this wouldn’t be an issue as generally the databases I work with use ‘localhost’ as a connection URL, so the Stirling credentials would have been wrong for my local DB and the script would have just quit, but Stirling (where the system is hosted) uses a full URL instead of ‘localhost’.  This meant that even though I had a local copy of the database on my PC and the scripts were running on a local server set up on my PC the scripts were in fact connecting to the real database at Stirling.  This meant the live data was being changed.  I didn’t realise this as the script was running and as it was taking some time I cancelled it, meaning the update quit halfway through changing borrowing records and deleting page records in the CMS.

I then had to write a further script to delete all of the page and borrowing records for this register from the Stirling server and reinstate the data from my local database.  Thankfully this worked ok.  I then ran my test script on the actual local database on my PC and the script did exactly what I wanted it to do, namely:

Iterate through the pages and for each odd numbered page move the records on these to the preceding even numbered page, and at the same time regenerate the ‘page order’ for each record so they follow on from the existing records.  Then the even page needs its folio number updated to add in the odd number (e.g. so folio number 2 becomes ‘2-3’) and generate an image reference based on this (e.g. UYLY207-2_2-3).  Then delete the odd page record and after all that is done regenerate the ‘next’ and ‘previous’ page links for all pages.

I therefore had to use my ‘delete and reinsert’ script again to revert to the data prior to the update as my script wasn’t set up to work with pages that don’t just increment their folio number by 1 each time.  After some discussion with the RA I updated the script again so that it would work with the non-uniform data and thankfully all worked fine after that.  Later in the week I also found some time to process two further St Andrews registers that needed their pages and records merged, and thankfully these went much smoother.

I also worked on the Speech Star project this week.  I created a new page on both of the project’s sites (which are not live yet) for viewing videos of Central Scottish phonetic features.  I also replaced the temporary logos used on the sites with the finalised logos that had been designed by a graphic designer.  However, the new logo only really works well on a white background as the white cut-out round the speech bubble into the star becomes the background colour of the header.  The blue that we’re currently using for the site header doesn’t work so well with the logo colours.  Also, the graphic designer had proposed using a different font for the site and I decided to make a new interface for the site, which you can see below.  I’m still waiting for feedback to see whether the team prefer this to the old interface (a screenshot of which you can see on this page: https://digital-humanities.glasgow.ac.uk/2022-01-17/) but I personally think it looks a lot better. 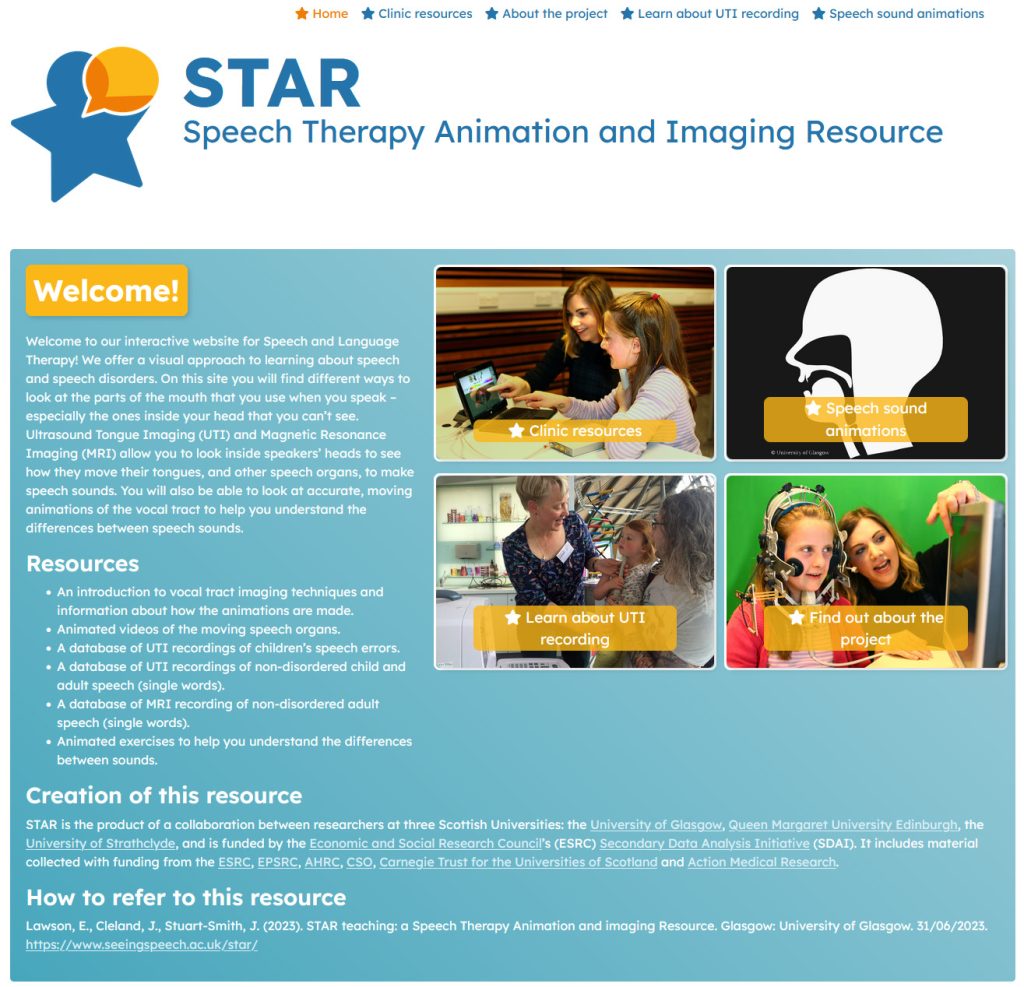 I also returned to the Burns Manuscript database that I’d begun last week.  I added a ‘view record’ icon to each row which if pressed on opens a ‘card’ view of the record on its own page.  I also added in the search options, which appear in a section above the table.  By default, the section is hidden and you can show/hide it by pressing on a button.  Above this I’ve also added in a placeholder where some introductory text can go.  If you open the ‘Search options’ section you’ll find text boxes where you can enter text for year, content, properties and notes.  For year you can either enter a specific year or a range.  The other text fields are purely free-text at the moment, so no wildcards.  I can add these in but I think it would just complicate things unnecessarily.  On the second row are checkboxes for type, location name and condition.  You can select one or more of each of these.

The search options are linked by AND, and the checkbox options are linked internally by OR.  For example, filling in ‘1780-1783’ for year and ‘wrapper’ for properties will find all rows with a date between 1780 and 1783 that also have ‘wrapper’ somewhere in their properties.  If you enter ‘work’ in content and select ‘Deed’ and ‘Fragment’ as types you will find all rows that are either ‘Deed’ or ‘Wrapper’ and have ‘work’ in their content.

If a search option is entered and you press the ‘Search’ button the page will reload with the search options open, and the page will scroll down to this section.  Any rows matching your criteria will be displayed in the table below this.  You can also clear the search by pressing on the ‘Clear search options’ button.  In addition, if you’re looking at search results and you press on the ‘view record’ button the ‘Return to table’ button on the ‘card’ view will reload the search results.  That’s this mini-site completed now, pending feedback from the project team, and you can see a screenshot of the site with the search box open below: 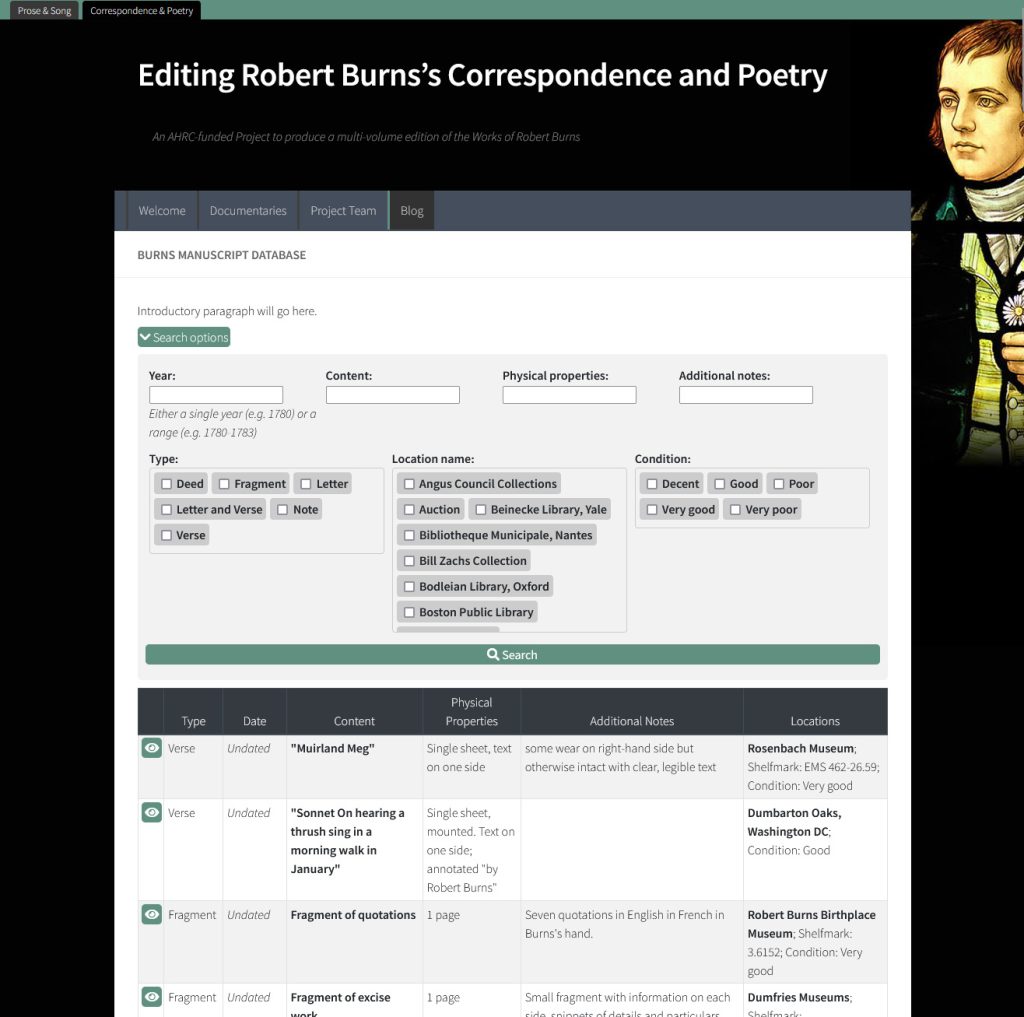 Also this week I’d arranged an in-person coffee and catch up with the other College of Arts developers.  We used to have these meetings regularly before Covid but this was the first time since then that we’d all met up.  It was really great to chat with Luca Guariento, Stevie Barrett and David Wilson again and to share the work we’d been doing since we last met.  Hopefully we can meet again soon.

Finally this week I helped out with a few WordPress questions from a couple of projects and I also had a chance to update all of the WordPress sites I manage (more than 50) to the most recent version.