The resource provides ultrasound tongue imaging (UTI) and lip video of speech, magnetic resonance imaging (MRI) video of speech, and 2D midsagittal head animations based on MRI and UTI data. Find out more
The Digital Catalogue documents, visually and textually, the first ten years of Andy Goldsworthy's ephemeral, outdoor practice. It replicates Goldsworthy's Slide Cabinet Index, and includes previously unpublished material from Goldsworthy's Sketchbook Diaries. Find out more
A publicly accessible, online scholarly edition of one of the most important archives of eighteenth-century medical "consultation letters", containing more than 20,000 digitised pages. Find out more
The University of Glasgow’s Historical Thesaurus of English is a unique resource charting the development of meaning in the huge and varied vocabulary of English. It consists of almost every recorded word in English from Anglo-Saxon times to the present day, all arranged into detailed hierarchies of meaning. Find out more
James McNeill Whistler (1834-1903) was a major figure in 19th century printmaking and created 490 etchings. Over 9500 impressions of these prints have been located and investigated during the project, which completes a series of catalogues raisonnés of Whistler's oeuvre. Find out more
A database of all known people of Scotland between 1093 and 1314 mentioned in over 8600 contemporary documents. It is also being extended to 1371 to include all those lands, peoples and relationships mentioned in royal charters between 1314 and 1371. Find out more
The project provides a richly-illustrated Catalogue of all known architectural projects by Charles Rennie Mackintosh, including over 1200 drawings by Mackintosh and the practice, analytical and contextual essays, a timeline and glossary. Find out more
The resource includes historical research for all Berwickshire place-names on the Ordnance Survey 1:50,000 Landranger map, including more than 1,600 place-names and 7,000 historical forms presented via a series of interactive maps. Find out more
The Scots Syntax Atlas presents the results of over 100,000+ acceptability judgments from over 500 speakers on over 250 morphosyntactic phenomena. The Atlas also contains a text-to-sound aligned corpus of spoken data totalling 275 hours and over 3 million words. Find out more
As told by some of Scotland's best writers, and illustrated with thousands of images from the collections of the city's world-famous libraries, museums and universities. From football to fashions, Auchenshuggle to Yoker, you'll find it all here. Find out more

I was on holiday for most of the previous two weeks, working two days during this period.  I’ll also be on holiday again next week, so I’ve had quite a busy time getting things done.  Whilst I was away I dealt with some queries from Joanna Kopaczyk about the Future of Scots website.  I also had to investigate a request to fill in timesheets for my work on the Speak For Yersel project, as apparently I’d been assigned to the project as ‘Directly incurred’ when I should have been ‘Directly allocated’.  Hopefully we’ll be able to get me reclassified but this is still in-progress.  I also fixed a couple of issues with the facility to export data for publication for the Berwickshire place-name project for Carole Hough, and fixed an issue with an entry in the DSL, which was appearing in the wrong place in the dictionary.  It turned out that the wrong ‘url’ tag had been added to the entry’s XML several years ago and since then the entry was wrongly positioned.  I fixed the XML and this sorted things.  I also responded to a query from Geert of the Anglo-Norman Dictionary about Aberystwyth’s new VPN and whether this would affect his access to the AND.  I also investigated an issue Simon Taylor was having when logging into a couple of our place-names systems.

On the Monday I returned to work I launched two new resources for different projects.  For the Books and Borrowing project I published the Chambers Library Map (https://borrowing.stir.ac.uk/chambers-library-map/) and reorganised the site menu to make space for the new page link.  The resource has been very well received and I’m pretty pleased with how it’s turned out.  For the Seeing Speech project I launched the new Gaelic Tongues resource (https://www.seeingspeech.ac.uk/gaelic-tongues/) which has received a lot of press coverage, which is great for all involved.

I spent the rest of the week dividing my time primarily between three projects:  Speak For Yersel, Books and Borrowing and Speech Star.  For Books and Borrowing I continued processing the backlog of library register image files that has built up.  There were about 15 registers that needed to be processed, and each needed to be handled in a different way.  This included nine registers from Advocates Library that had been digitised by the NLS, for which I needed to batch process the images to rename them, delete blank pages, create page records in the CMS and then tweak the automatically generated folio numbers to account for discrepancies in the handwritten page number in the images.  I also processed a register for the Royal High School, which involved renaming the images so they match up with image numbers already assigned to page records in the CMS, inserting new page records and updating the ‘next’ and ‘previous’ links for pages for which new images had been uncovered and generating new page records for many tens of new pages that follow on from the ones that have already been created in the CMS.  I also uploaded new images for the Craigston register and created a new register including all page records and associated image URLs for a further register for Aberdeen.  I still have some further RHS registers to do and a few from St Andrews, but these will need to wait until I’m back from my holiday.

For Speech Star I downloaded a ZIP containing 500 new ultrasound MP4 videos.  I then had to process them to generate ‘poster’ images for each video (these are images that get displayed before the user chooses to play the video).  I then had to replace the existing normalised speech database with data from a new spreadsheet that included these new videos plus updates to some of the existing data.  This included adding a few new fields and changing the way the age filter works, as much of the new data is for child speakers who have specific ages in months and years, and these all need to be added to a new ‘under 18’ age group.

For Speak For Yersel I had an awful lot to do.  I started with a further large-scale restructuring of the website following feedback from the rest of the team.  This included changing the site menu order, adding in new final pages to the end of surveys and quizzes and changing the text of buttons that appear when displaying the final question.

I also realised that if you’re in full screen mode and you select a filter option the map exits full screen as the map section of the page reloads.  This is very annoying, but I may not be able to fix it as it would mean completely changing how the maps are loaded.  This is because such filters and options were never intended to be included in the maps and the system was never developed to allow for this.  I’ve had to somewhat shoehorn in the filter options and it’s not how I would have done things had I known from the beginning that these options were required.  However, the filters work and I’m sure they will be useful.  I’ve added in filters for age, education and gender, as you can see in the following screenshot: 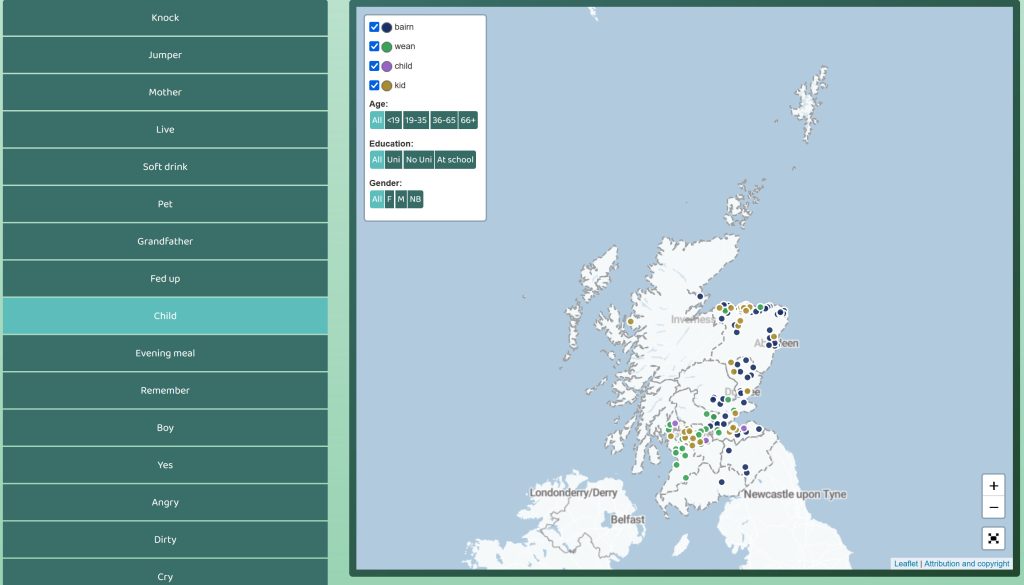 I also updated the ‘Give your word’ activity that asks to identify younger and older speakers to use the new filters too.  The map defaults to showing ‘all’ and the user then needs to choose an age.  I’m still not sure how useful this activity will be as the total number of dots for each speaker group varies considerably, which can easily give the impression that more of one age group use a form compared to another age group purely because one age group has more dots overall.  The questions don’t actually ask anything about geographical distribution so having the map doesn’t really serve much purpose when it comes to answering the question.  I can’t help but think that just presenting people with percentages would work better, or some other sort of visualisation like a bar graph or something.

I then moved on to working on the quiz for ‘she sounds really clever’ and so far I have completed both the first part of the quiz (questions about ratings in general) and the second part (questions about listeners from a specific region and their ratings of speakers from regions).  It’s taken a lot of brain-power to get this working as I decided to make the system work out the correct answer and to present it as an option alongside randomly selected wrong answers.  This has been pretty tricky to implement (especially as depending on the question the ‘correct’ answer is either the highest or the lowest) but will make the quiz much more flexible – as the data changes so will the quiz.

Part one of the quiz page itself is pretty simple.  There is the usual section on the left with the question and the possible answers.  On the right is a section containing a box to select a speaker and the rating sliders (readonly).  When you select a speaker the sliders animate to their appropriate location.  I decided to not include the map or the audio file as these didn’t really seem necessary for answering the questions, they would clutter up the screen and people can access them via the maps page anyway (well, once I move things from the ‘activities’ section).  Note that the user’s answers are stored in the database (the region selected and whether this was the correct answer at the time).  Part two of the quiz features speaker/listener true/false questions and this also automatically works out the correct answer (currently based on the 50% threshold).  Note that where there is no data for a listener rating a speaker from a region the rating defaults to 50.  We should ensure that we have at least one rating for a listener in each region before we let people answer these questions.  Here is a screenshot of part one of the quiz in action, with randomly selected ‘wrong’ answers and a dynamically outputted ‘right’ answer: 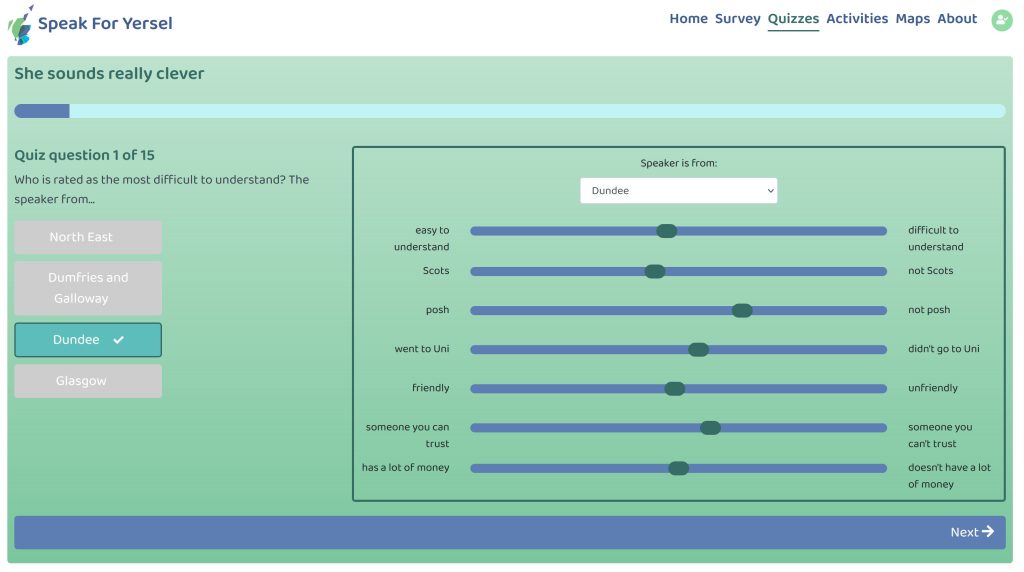 I also wrote a little script to identify duplicate lexemes in categories in the Historical Thesaurus as it turns out there are some occasions where a lexeme appears more than once (with different dates) and this shouldn’t happen.  These will need to be investigated and the correct dates will need to be established.

I will be on holiday again next week so there won’t be another post until the week after I’m back.