A database of all known people of Scotland between 1093 and 1314 mentioned in over 8600 contemporary documents. It is also being extended to 1371 to include all those lands, peoples and relationships mentioned in royal charters between 1314 and 1371. Find out more
The online catalogue includes some 550 oil paintings and over 1700 works on paper dating from ca 1850 to 1903. The evolution of each painting from sketch to final oil is described and illustrated. Find out more
The project provides a richly-illustrated Catalogue of all known architectural projects by Charles Rennie Mackintosh, including over 1200 drawings by Mackintosh and the practice, analytical and contextual essays, a timeline and glossary. Find out more
The Metaphor Map of English shows the metaphorical links which have been identified between different areas of meaning. These links can be from the Anglo-Saxon period right up to the present day so the map covers 1300 years of the English language. Find out more
The Scots Syntax Atlas presents the results of over 100,000+ acceptability judgments from over 500 speakers on over 250 morphosyntactic phenomena. The Atlas also contains a text-to-sound aligned corpus of spoken data totalling 275 hours and over 3 million words. Find out more
A publicly accessible, online scholarly edition of one of the most important archives of eighteenth-century medical "consultation letters", containing more than 20,000 digitised pages. Find out more
The project explores Romantic-period accounts of journeys into Wales and Scotland with a focus on the writings of the Flintshire naturalist and antiquarian Thomas Pennant (1726-1798), whose published Tours of both countries did so much to awaken public interest in the ‘peripheries’ of Britain. Find out more
The Scottish Corpora project has created large electronic corpora of written and spoken texts for the languages of Scotland, featuring nearly 4.6 million words of text, with audio recordings to accompany many of the spoken texts. Find out more
The Digital Catalogue documents, visually and textually, the first ten years of Andy Goldsworthy's ephemeral, outdoor practice. It replicates Goldsworthy's Slide Cabinet Index, and includes previously unpublished material from Goldsworthy's Sketchbook Diaries. Find out more
The resource provides ultrasound tongue imaging (UTI) and lip video of speech, magnetic resonance imaging (MRI) video of speech, and 2D midsagittal head animations based on MRI and UTI data. Find out more

I completed an initial version of the Chambers Library map for the Books and Borrowing project this week.  It took quite a lot of time and effort to implement the subscription period range slider.  Searching for a range when the data also has a range of dates rather than a single date means we needed to make a decision about what data gets returned and what doesn’t.  This is because the two ranges (the one chosen as a filter by the user and the one denoting the start and end periods of subscription for each borrower) can overlap in many different ways.  For example, the period chosen by the user is 05 1828 to 06 1829.  Which of the following borrowers should therefore be returned?

Basically if there is any overlap between the selected period and the borrower’s subscription period the borrower will be returned.  But this means most borrowers will always be returned a lot of the time.  It’s a very different sort of filter to one that purely focuses on a single date – e.g. filtering the data to only those borrowers whose subscription periods *begins* between 05 1828 and 06 1829.

Based on the above assumptions I began to write the logic that would decide which borrowers to include when the range slider is altered.  It was further complicated by having to deal with months as well as years.  Here’s the logic in full if you fancy getting a headache:

I also added the subscription period to the popups.  The only downside to the range slider is that the occupation marker colours change depending on how many occupations are present during a period, so you can’t always tell an occupation by its colour. I might see if I can fix the colours in place, but it might not be possible.

I also noticed that the jQuery UI sliders weren’t working very well on touchscreens so installed the jQuery TouchPunch library to fix that (https://github.com/furf/jquery-ui-touch-punch).  I also made the library marker bigger and gave it a white border to more easily differentiate it from the borrower markers.

I then moved onto incorporating page images in the resource too.  Where a borrower has borrower records the relevant pages where these borrowing records are found now appear as thumbnails in the borrower popup.  These are generated by the IIIF server based on dimensions passed to it, which is much nicer than having to generate and store thumbnails directly.  I also updated the popup to make it wider when required to give more space for the thumbnails.  Here’s a screenshot of the new thumbnails in action: 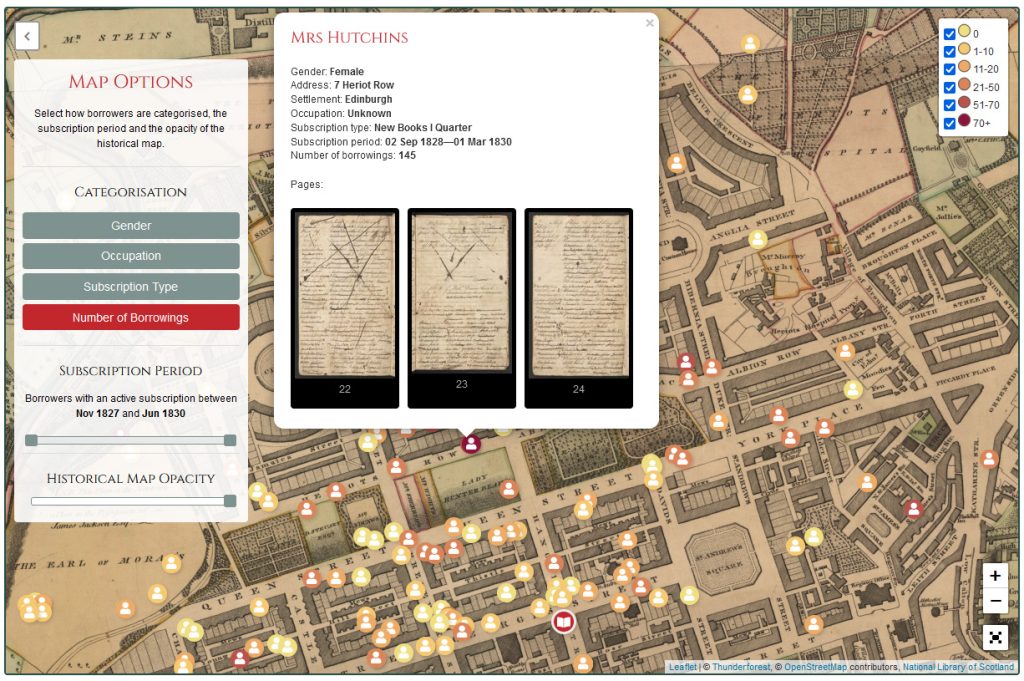 Clicking on a thumbnail opens a further popup containing a zoomable / pannable image of the page.  This proved to be rather tricky to implement.  Initially I was going to open a popup in the page (outside of the map container) using a jQuery UI Dialog.  However, I realised that this wouldn’t work when the map was being viewed in full-screen mode, as nothing beyond the map container is visible in such circumstances.  I then considered opening the image in the borrower popup but this wasn’t really big enough.  I then wondered about extending the ‘Map options’ section and replacing the contents of this with the image, but this then caused issues for the contents of the ‘Map options’ section, which didn’t reinitialise properly when the contents were reinstated.  I then found a plugin for the Leaflet mapping library that provides a popup within the map interface (https://github.com/w8r/Leaflet.Modal) and decided to use this.  However, it’s all a little complex as the popup then has to include another mapping library called OpenLayers that enables the zooming and panning of the page image, all within the framework of the overall interactive map.  It is all working and I think it works pretty well, although I guess the map interface is a little cluttered, what with the ‘Map Options’ section, the map legend, the borrower popup and then the page image popup as well.  Here’s a screenshot with the page image open: 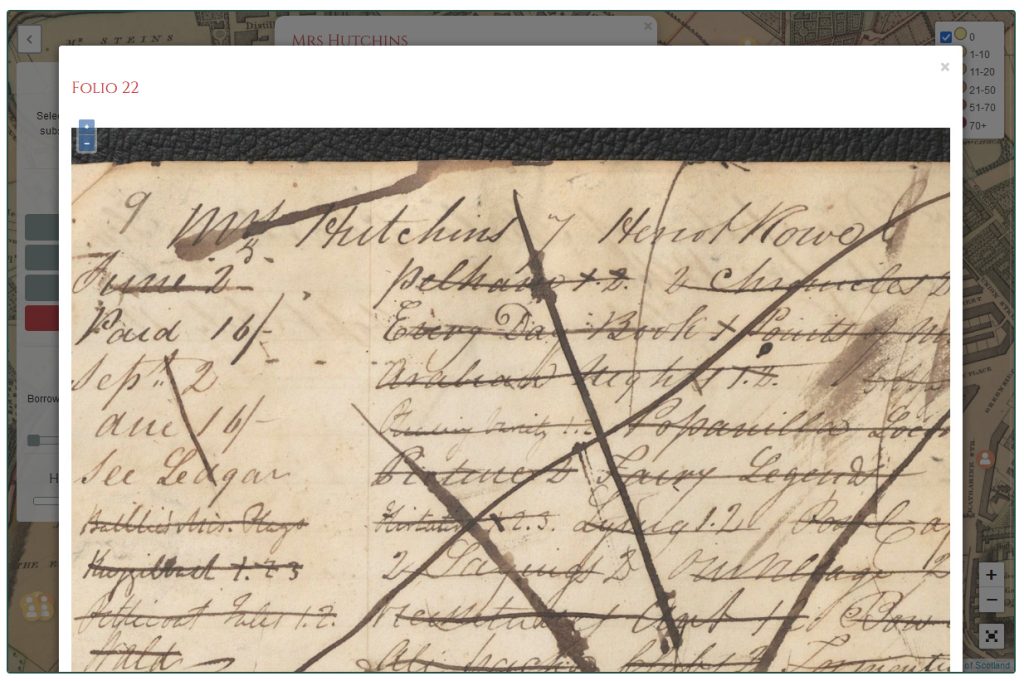 All that’s left to do now is add in the introductory text once Alex has prepared it and then make the map live.  We might need to rearrange the site’s menu to add in a link to the Chambers Map as it’s already a bit cluttered.

Also for the project I downloaded images for two further library registers for St Andrews that had previously been missed.  However, there are already records for the registers and pages in the CMS so we’re going to have to figure out a way to work out which image corresponds to which page in the CMS.  One register has a different number of pages in the CMS compared to the image files so we need to work out how to align the start and end and if there are any gaps or issues in the middle.  The other register is more complicated because the images are double pages whereas it looks like the page records in the CMS are for individual pages.  I’m not sure how best to handle this.  I could either try and batch process the images to chop them up or batch process the page records to join them together.  I’ll need to discuss this further with Gerry, who is dealing with the data for St Andrews.

Also this week I prepared for and gave a talk to a group of students from Michigan State University who were learning about digital humanities.  I talked to them for about an hour about a number of projects, such as the Burns Supper map (https://burnsc21.glasgow.ac.uk/supper-map/), the digital edition I’d created for New Modernist Editing (https://nme-digital-ode.glasgow.ac.uk/), the Historical Thesaurus (https://ht.ac.uk/), Books and Borrowing (https://borrowing.stir.ac.uk/) and TheGlasgowStory (https://theglasgowstory.com/).  It went pretty and it was nice to be able to talk about some of the projects I’ve been involved with for a change.

I also made some further tweaks to the Gentle Shepherd Performances page which is now ready to launch, and helped Geert out with a few changes to the WordPress pages of the Anglo-Norman Dictionary.  I also made a few tweaks to the WordPress pages of the DSL website and finally managed to get a hotel room booked for the DHC conference in Sheffield in September.  I also made a couple of changes to the new Gaelic Tongues section of the Seeing Speech website and had a discussion with Eleanor about the filters for Speech Star.  Fraser had been in touch with about 500 Historical Thesaurus categories that had been newly matched to OED categories so I created a little script to add these connections to the online database.

I also had a Zoom call with the Speak For Yersel team.  They had been testing out the resource at secondary schools in the North East and have come away with lots of suggested changes to the content and structure of the resource.  We discussed all of these and agreed that I would work on implementing the changes the week after next.

Next week I’m going to be on holiday, which I have to say I’m quite looking forward to.