The project explores Romantic-period accounts of journeys into Wales and Scotland with a focus on the writings of the Flintshire naturalist and antiquarian Thomas Pennant (1726-1798), whose published Tours of both countries did so much to awaken public interest in the ‘peripheries’ of Britain. Find out more
A database of all known people of Scotland between 1093 and 1314 mentioned in over 8600 contemporary documents. It is also being extended to 1371 to include all those lands, peoples and relationships mentioned in royal charters between 1314 and 1371. Find out more
James McNeill Whistler (1834-1903) was a major figure in 19th century printmaking and created 490 etchings. Over 9500 impressions of these prints have been located and investigated during the project, which completes a series of catalogues raisonnés of Whistler's oeuvre. Find out more
The online catalogue includes some 550 oil paintings and over 1700 works on paper dating from ca 1850 to 1903. The evolution of each painting from sketch to final oil is described and illustrated. Find out more
The Metaphor Map of English shows the metaphorical links which have been identified between different areas of meaning. These links can be from the Anglo-Saxon period right up to the present day so the map covers 1300 years of the English language. Find out more
The University of Glasgow’s Historical Thesaurus of English is a unique resource charting the development of meaning in the huge and varied vocabulary of English. It consists of almost every recorded word in English from Anglo-Saxon times to the present day, all arranged into detailed hierarchies of meaning. Find out more
A publicly accessible, online scholarly edition of one of the most important archives of eighteenth-century medical "consultation letters", containing more than 20,000 digitised pages. Find out more
The project provides a richly-illustrated Catalogue of all known architectural projects by Charles Rennie Mackintosh, including over 1200 drawings by Mackintosh and the practice, analytical and contextual essays, a timeline and glossary. Find out more
The Scots Syntax Atlas presents the results of over 100,000+ acceptability judgments from over 500 speakers on over 250 morphosyntactic phenomena. The Atlas also contains a text-to-sound aligned corpus of spoken data totalling 275 hours and over 3 million words. Find out more
The Digital Catalogue documents, visually and textually, the first ten years of Andy Goldsworthy's ephemeral, outdoor practice. It replicates Goldsworthy's Slide Cabinet Index, and includes previously unpublished material from Goldsworthy's Sketchbook Diaries. Find out more

I’d taken Monday off this week to have an extra-long weekend following the jubilee holidays on Thursday and Friday last week.  On Tuesday I returned to another meeting for Speak For Yersel and a list of further tweaks to the site, including many changes to three of the five activities and a new set of colours for the map marker icons, which make the markers much more easy to differentiate.

I spent most of the week working on the Books and Borrowing project.  We’d been sent a new library register from the NLS and I spent a bit of time downloading the 700 or so images, processing them and uploading them into our system.  As usual, page numbers go a bit weird.  Page 632 is written as 634 and then after page 669 comes not 670 but 700!  I ran my script to bring the page numbers in the system into line with the oddities of the written numbers.  On Friday I downloaded a further library register which I’ll need to process next week.

My main focus for the project was the Chambers Library interactive map sub-site.  The map features the John Ainslie 1804 map from the NLS, and currently it uses the same modern map as I’ve used elsewhere in the front-end for consistency, although this may change.  The map defaults to having a ‘Map options’ pane open on the left, and you can open and close this using the button above it.  I also added a ‘Full screen’ button beneath the zoom buttons in the bottom right.  I also added this to the other maps in the front-end too. Borrower markers have a ‘person’ icon and the library itself has the ‘open book’ icon as found on other maps.

By default the data is categorised by borrower gender, with somewhat stereotypical (but possibly helpful) blue and pink colours differentiating the two.  There is one borrower with an ‘unknown’ gender and this is set to green.  The map legend in the top right allows you to turn on and off specific data groups.  The screenshot below shows this categorisation: 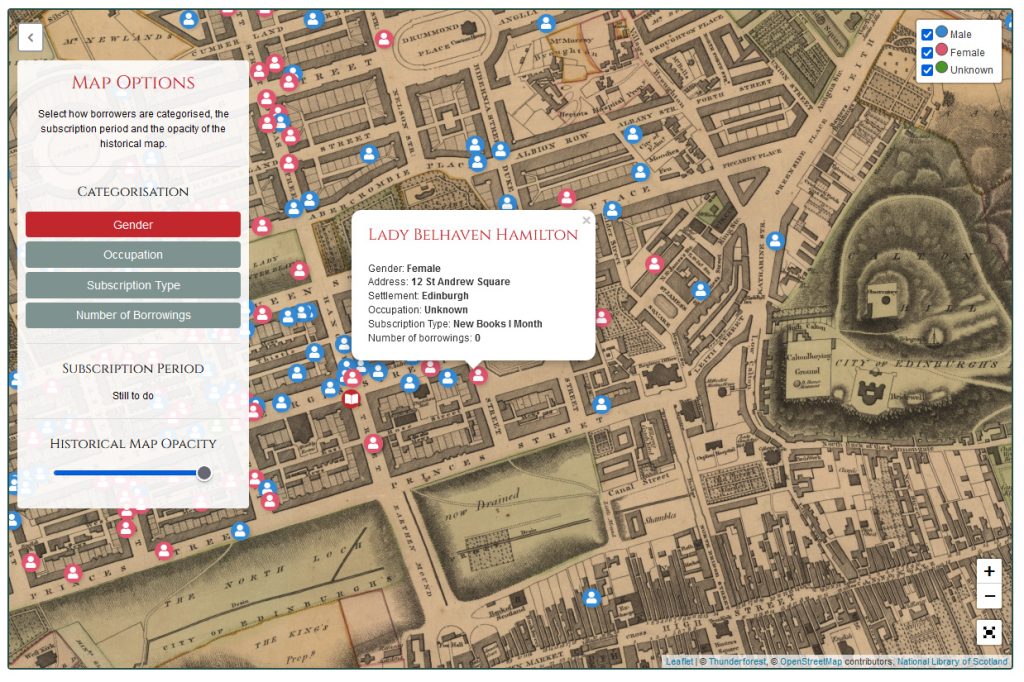 The next categorisation option is occupation, and this has some problems.  The first is there are almost 30 different occupations, meaning the legend is awfully long and so many different marker colours are needed that some of them are difficult to differentiate.  Secondly, most occupations only have a handful of people.  Thirdly, some people have multiple occupations, and if so these are treated as one long occupation, so we have both ‘Independent Means > Gentleman’ and then ‘Independent Means > Gentleman, Politics/Office Holders > MP (Britain)’.  It would be tricky to separate these out as the marker would then need to belong to two sets with two colours, plus what happens if you hide one set?  I wonder if we should just use the top-level categorisation for the groupings instead?  This would result in 12 groupings plus ‘unknown’, meaning the legend would be both shorter and narrower.  Below is a screenshot of the occupation categorisation as it currently stands: 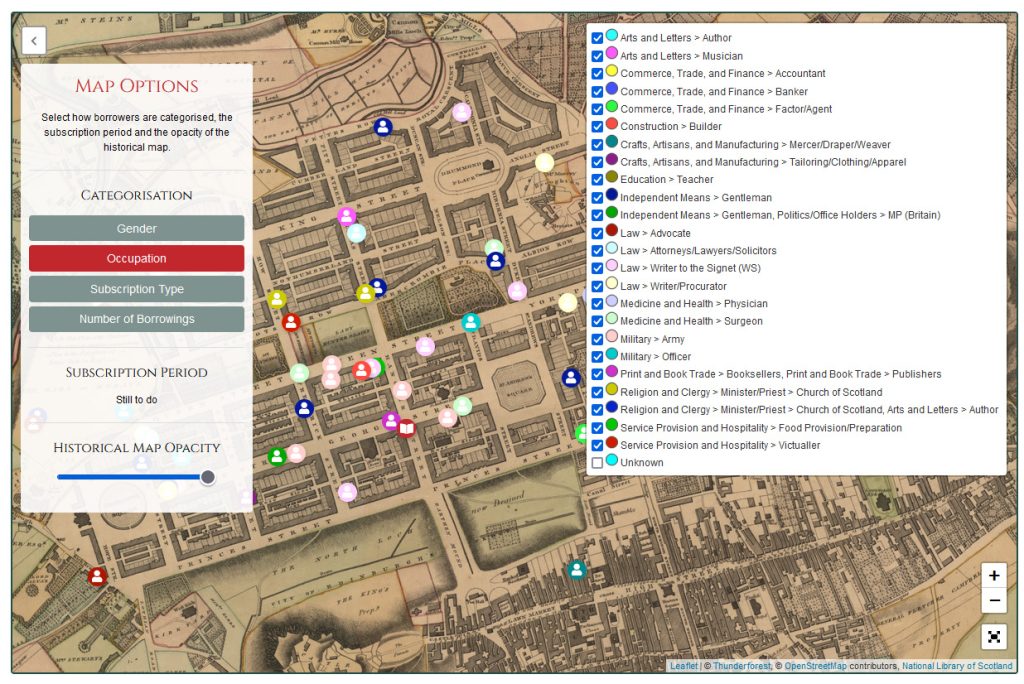 The next categorisation is subscription type, which I don’t think needs any explanation.  I then decided to add in a further categorisation for number of borrowings, which wasn’t originally discussed but as I used the page I found myself looking for an option to see who borrowed the most, or didn’t borrow anything.  I added the following groupings, but these may change: 0, 1-10, 11-20, 21-50, 51-70, 70+ and have used a sequential colour scale (darker = more borrowings).  We might want to tweak this, though, as some of the colours are a bit too similar.  I haven’t added in the filter to select subscription period yet, but will look into this next week.

At the bottom of the map options is a facility to change the opacity of the historical map so you can see the modern street layout.  This is handy for example for figuring out why there is a cluster of markers in a field where ‘Ainslie Place’ was presumably built after the historical map was produced.

I decided to not include the marker clustering option in this map for now as clustering would make it more difficult to analyse the categorisation as markers from multiple groupings would end up clustered together and lose their individual colours until the cluster is split.  Marker hover-overs display the borrower name and the pop-ups contain information about the borrower.  I still need to add in the borrowing period data, and also figure out how best to link out to information about the borrowings or page images.  The Chambers Library pin displays the same information as found in the ‘libraries’ page you’ve previously seen.

Also this week I responded to a couple of queries from the DSL people about Google Analytics and the icons that gets used for the site when posting on Facebook.  Facebook was picking out the University of Glasgow logo rather than the DSL one, which wasn’t ideal.  Apparently there’s a ‘meta’ tag that you need to add to the site header in order for Facebook to pick up the correct logo, as discussed here: https://stackoverflow.com/questions/7836753/how-to-customize-the-icon-displayed-on-facebook-when-posting-a-url-onto-wall

I also created a new user for the Ayr place-names project and dealt with a couple of minor issues with the CMS that Simon Taylor had encountered.  I also investigated a certificate error with the ohos.ac.uk website and responded to a query about QR codes from fellow developer David Wilson.  Also, Craig Lamont in Scottish Literature got in touch about a spreadsheet listed Burns manuscripts that he’s been working on with a view to turning it into a searchable online resource and I gave him some feedback about the structure of the spreadsheet.

Finally, I did a bit of work for the Historical Thesaurus, working on a further script to match up HT and OED categories based on suggestions by researcher Beth Beattie.  I found a script I’d produced in from 2018 that ran pattern matching on headings and I adapted this to only look at subcats within 02.02 and 02.03, picking out all unmatched OED subcats from these (there are 627) and then finding all unmatched HT categories where our ‘t’ numbers match the OED path.  Previously the script used the HT oedmaincat column to link up OED and HT but this no longer matches (e.g. HT ‘smarten up’ has ‘t’ nums 02.02.16.02 which matches OED 02.02.16.02 ‘to smarten up’ whereas HT ‘oedmaincat’ is ’02.04.05.02’).

The script lists the various pattern matches at the top of the page and the output is displayed in a table that can be copied and pasted into Excel.  Of the 627 OED subcats there are 528 that match an HT category.  However, some of them potentially match multiple HT categories.  These appear in red while one to one matches appear in green.  Some of these multiple matches are due to Levenshtein matches (e.g. ‘sadism’ and ‘sadist’) but most are due to there being multiple subcats at different levels with the exact same heading.  These can be manually tweaked in Excel and then I could run the updated spreadsheet through a script to insert the connections.  We also had an HT team meeting this week that I attended.